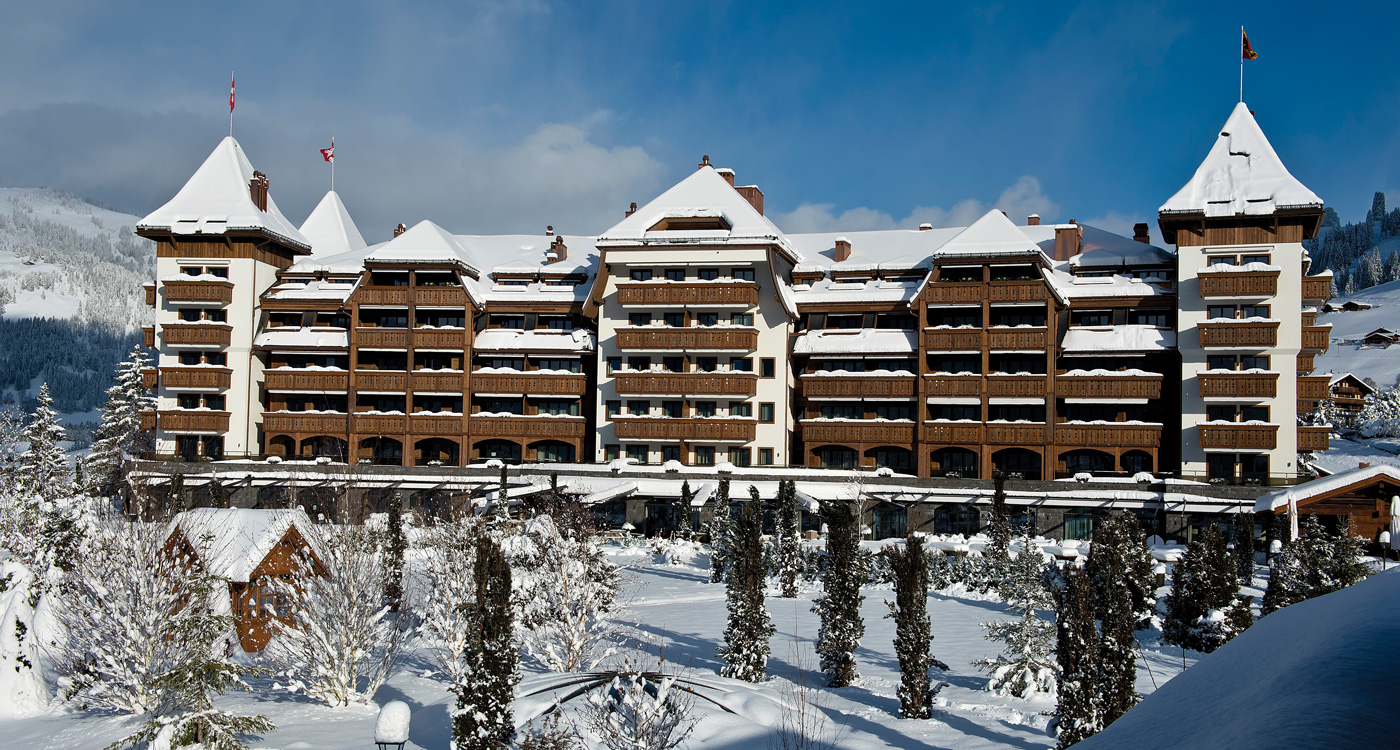 The traditional Swiss mountain resort of Gstaad is as renowned for its rich-and-famous residents as it is for its enduring and picturesque surroundings. Now, for the first time in over a century, there’s a new hotel in town. Let’s just say the bar has been raised. 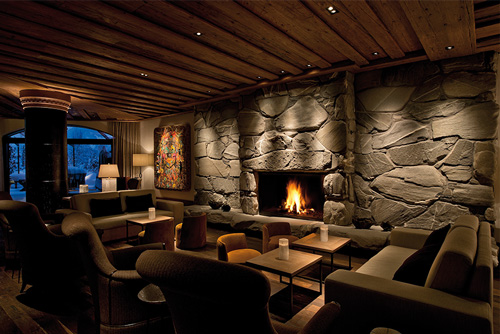 As the hotel uses so much old wood, fire safety is a serious and highly important concern. Sprinklers were not an option as there are too many valuable artworks. Instead, there is an innovative solution called ‘High Fog’, which in the event of a fire, expels a dense cloud that extracts the oxygen from the air to extinguish the fire within seconds.

French speakers call it “Shtaad.” German-speakers call it “G-shtaad.” Those who aren’t in the know call it “Ger-staad”. Whatever its name, Gstaad is unlike any other Alpine town. Not because, at 1,050 metres, it’s one of the lowest winter resorts around but because in the grand scheme of things, partying, shopping and fine dining, are just as important as the skiing. With 250-plus kilometres of pistes, 62 lifts and a high-altitude glacier that marks the start of the longest run in the region, the skiing isn’t shoddy either.

Over the years, this little town in the Bernese Oberland has developed into a (not-so) secret clubhouse for the wealthy. Not those vulgar types who revel in St. Moritz or more recently Courchevel. Rather, the ones who prefer to go unnoticed and undisturbed, secure in the fact that despite being home to more fat cats per square metre than anywhere on Earth, Gstaad still offers idyllic authenticity. The majority of the town’s 3,500 residents are dairy farmers and even at the height of the tourist season, there are still more cows here than people.

Reduce Gstaad to its basic elements and you’ll find three fundamentals: authenticity, anonymity and exclusivity. There’s something about the combination that affords the thousands who flock here year-round a feeling of belonging, a sense they’re part of a discrete, tasteful and well-moneyed club. No wonder it’s in such demand.

Unlike other holiday spots in the Alps, Gstaad has not lost its identity. Its governors are as legendary in their passing of laws as they are in upholding them. As a result, restrictions on selling land has caused the value of residential properties to skyrocket, helped keep the farmers where they belong and safeguarded Gstaad’s much-lauded architectural heritage via the mandating of traditional building techniques and materials. It may be surprising at first but here, even the supermarkets look like grand chalets.

In such a context, how does one go about building a brand new ultra-luxury resort? Apparently with some difficulty. The Alpina took a whopping 340 million USD to complete. And as though that wasn’t discouraging enough, it also took 19 staggering years to build.

The epic began in 1994 when Gstaad’s oldest lodge, the Grand Hotel Alpina was bought by its current owners, Marcel Bach (a former ski instructor turned real estate mogul) and Jean-Claude Mimran (a French-Algerian businessman who attended a local private school). The partners recognised the Grand Hotel Alpina’s potential but knew they could only realise their plans if they dynamited it and started afresh. Fifteen years of wrangling later, Switzerland’s Federal Supreme Court finally granted the duo permission with the proviso they rebuild much of the hotel’s exterior as it had been. Construction took three years and arriving just over a month after the hotel’s grand opening, which – trust the Swiss – was bang on schedule, I must say it’s clear that the wait was worth it.

At the Alpina, everything is beyond compare. “In a world where many claim to offer the perfect luxury experience,” Onno Poortier, the owner’s consultant and former president of the Peninsula Group, declared on opening day, “the Alpina Gstaad offers a new level of distinction and authenticity. The hotel is a blend of local traditions and global contemporary inspiration with the discretion and attention to detail reflecting Swiss luxury standards.”

RIGHT: Each bathroom contains a large bathtub, an over-sized showerhead and a TV inset into the mirror. LEFT: London-based Hirsch Bedner Associates fashioned a contemporary interpretation of a traditional Swiss chalet for the 25 rooms and 31 suites in the Alpina.

The Peninsula? Does that mean there’s some sort of link between the Alpina and the Peninsula Group? “Absolutely not,” says Niklaus Leuenberger, the hotel’s Swiss manager, who also happens to have had a long and prosperous career at the Peninsula. “We are an independent hotel, with independent management and ownership. We did consider the prospect of tying up with an international group but in the end we decided against it.” Interestingly, all the major hotels in Gstaad are independent too. Evidently Gstaad is all the international clout any hotelier needs.

“The long delays allowed us to accumulate over 21 tennis courts worth of centuries-old salvaged wood that has been used throughout the hotel,” continues Leuenberger, some 13,000 square metres of aged pine sourced from dilapidated farmhouses. “There was so much woodwork and so time-consuming was the labour that we set up a dedicated woodshop within the basement of the hotel.”

The developers, builders and craftsmen of the Alpina all came from nearby. Even the lead architects, Jaggi und Partner are from Gstaad. They were supported by an array of top international design specialists for the rooms, public areas, restaurants, spa and landscaping. Little wonder then that this place blends so effortlessly into its surroundings. It’s tasteful, modern and exquisitely detailed. Wherever you look, there’s something to take your breath away.

Carved into the side of a hill, the entrance feels odd at first. Only later do you realise its brilliance. Nestled below ground, in a stone and wood-clad driveway, there’s a waterfall, a snow-covered fir tree beneath an open skylight and fairy lights that twinkle gently. “People are here to enjoy the outdoors,” Leuenberger explains. “The last thing we want to do is disturb the peace with a road and cars. The entrance not only ensures protection from the weather, it affords our guest upstairs the undisturbed sights, sounds and fragrances of nature.”

There are 25 rooms and 31 suites in total. Layouts are unique and all rooms have their own balconies. Treated pine abounds on walls and cupboards, while ceilings are covered in salvaged wood. Many of the rooms have their own fireplaces built from local stone. Everything in the room – from the state-of-the-art lighting system, to the curtains and fireplace – is controlled via easy to use switches on the walls. One rather charming trick is the way each room’s minibar and coffee machine are hidden within an antique armoire. It’s all very harmonious. If you had to find fault, it might be that the sheets are made from more hardwearing cotton, which is unusual in this day and age of high thread counts. But let’s not be sticklers.

The hotel has three restaurants, all under the direction of Marcus Lindner, who used to run Zürich’s Michelin two-star restaurant, Mesa. The one you’ll visit the most is Sommet, an all-day dining venue where breakfast is served every morning. Then there is Megu, the town’s first genuine Japanese restaurant. While a friend and long-time Gstaad resident took rather badly to the idea – “Who’d go to a Japanese restaurant in Gstaad?” he said to me. “Do you see any fish around here?” – fret not. Had he actually tried the place, I guarantee he’d have changed his tune because the fish are delivered fresh daily. Not convinced? Megu’s crusted asparagus spears and Kobe beef carpaccio are both divine. The last restaurant is Stübli, which serves quintessential specialties. Think rösti, fondue and raclette. 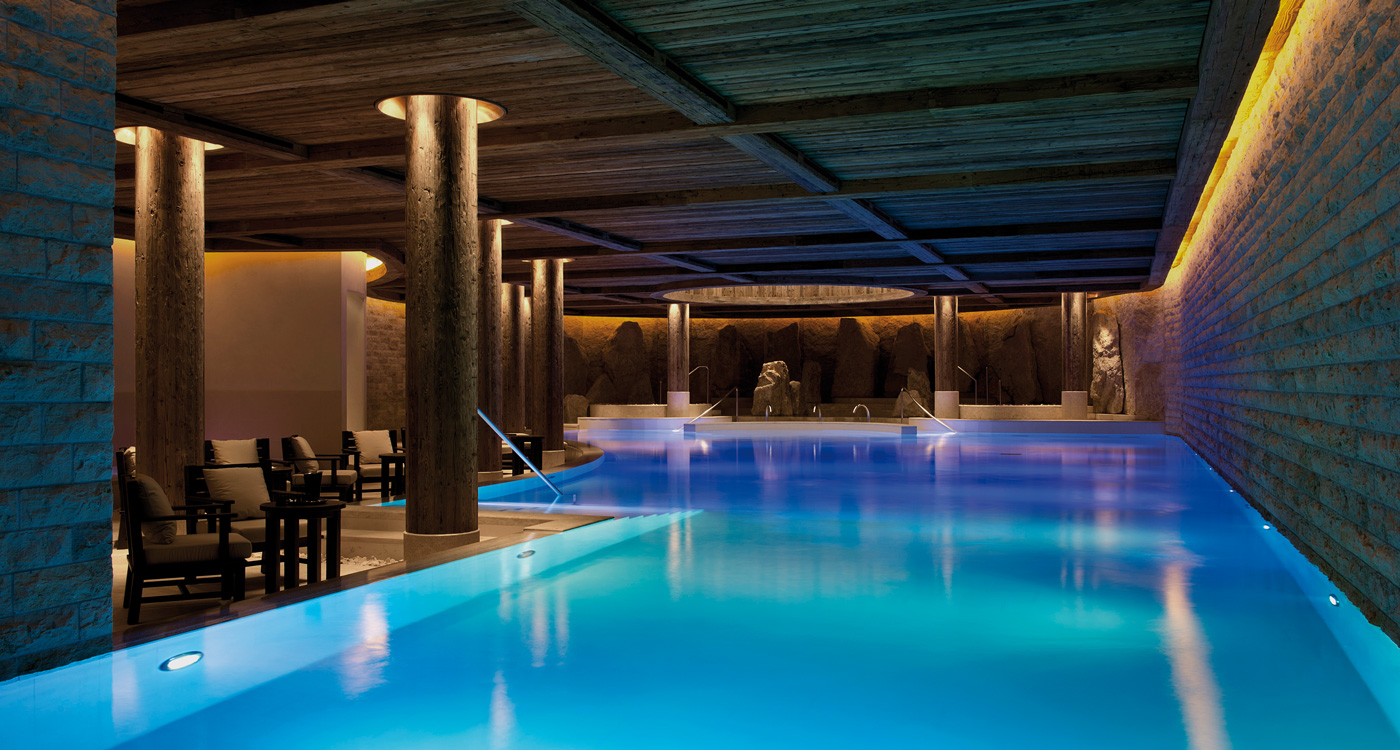 The 25-metre infinity indoor swimming pool features two Jacuzzis on the curved side, as well as a lap lane. The large rocks on the far wall form a special water feature but it’s the splash pool and water slide that will delight younger guests.

After a hard day’s skiing, there’s nothing better than a bit of après and the Alpina has done an amazing job of reinterpreting that experience for the modern day with the Queen in its deck of cards: the 2,000 square-metre Six Senses Spa. It’s spectacular. There’s a gym outfitted with fancy-pants TechnoGym equipment, a terrifically large, beautifully lit indoor pool, a couple of Jacuzzis and a sensational outdoor pool that’s hot enough even with snow around. There’s a studio for Pilates, Tai Chi or whatever takes your fancy, plentiful massage rooms and a treatment list longer than I’ve seen before. For those feeling poorly, there’s even an entire room made from Himalayan salt bricks that’s said to have supreme healing properties. Trust me when I say this place is the bee’s knees.

For all the superlatives I could throw at the Alpina, I must admit that the most impressive aspect of this hotel was not its amazing art collection, its stunning décor, its fantastic service or even how it has redefined the luxury ski hotel. The most remarkable aspect is the way the Alpina turned a profit before welcoming its first guest. Curious? Well you see, the owners thought to include serviced apartments in the mix – eleven in the hotel itself, three in a separate chalet and two enormous individual chalets within the grounds. Now consider that the two individual chalets sold for 130 million USD each and the owners’ business acumen is instantly apparent.

The Alpina is somewhere I’ll always long to return, a place best surmised as the perfect reflection of its surroundings, one that really does offer incredible authenticity, anonymity and exclusivity. And there can be no better compliment than that.