Places | Categories | Hotels | If You’ve been Weighing up a Trip to Walt Disney World then Now’s the Time to Do It. Here’s Why…
PLACES | Hotels 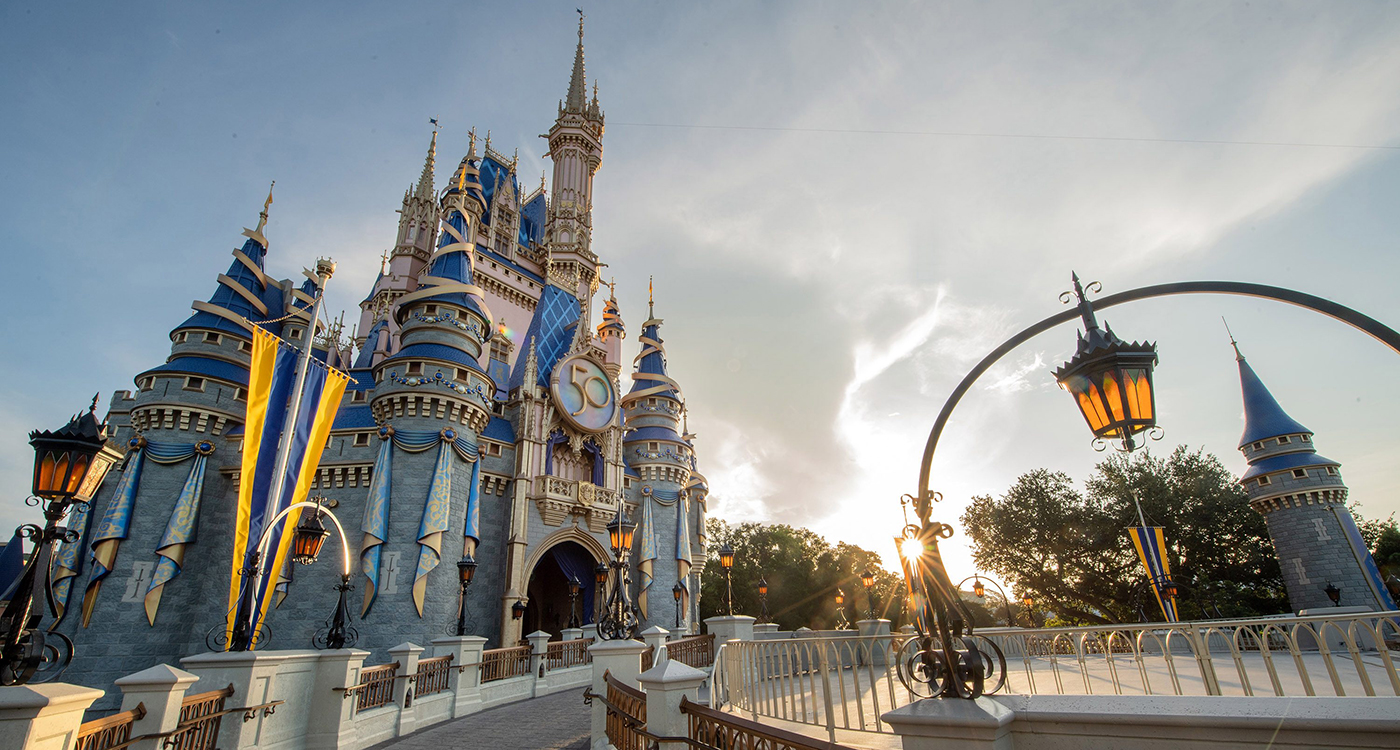 If You've been Weighing up a Trip to Walt Disney World then Now's the Time to Do It. Here's Why...
January 4, 2023 Nicolas Shammas 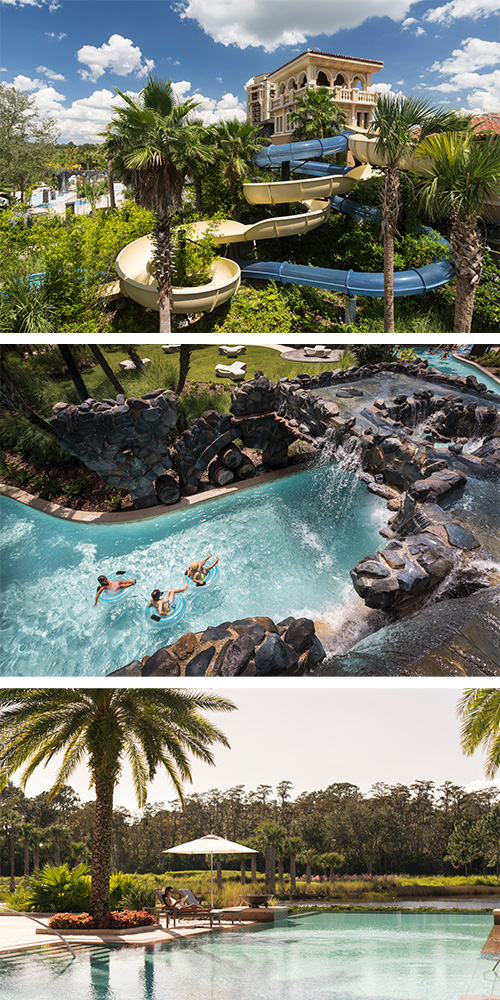 TOP: Previously painted in a muted blue and grey, the Cindarella castle in the Magic Kingdom was updated with a more attractive blue, light-pink and shimmering gold look as part of the park’s 50th anniversary celebrations, which continue through till March 31st, 2023. ABOVE: The Four Seasons Orlando doesn’t just have two water slides, it also boasts a lazy river with various cocktail drop off points along the ride. There’s also a splash zone, an adults-only pool and a family pool with a giant outdoor screen for twice-a-day “dive-in” Disney movies.

Going to Disney World is a childhood rite of passage, no doubt about that. And you’re reminded of this as you drive in from Orlando’s international airport because there’s a huge and colourful gateway spread across the motorway that reads: “Walt Disney World, The Most Magical Place on Earth” – it’s perfect, and true (for your little ones at least). You simply could never replicate Disney World in this day and age. Just imagine buying up 10,000 hectares of real estate today – yes that’s 100 million square metres of land – let alone building 40 hotels, four theme parks, two water parks, several golf courses and so much more. Or how about hiring almost 80,000 people to come to work every day? Disney is clearly beyond the categorisation of megacorporation. It’s actually a challenge just to get your head around the fact that Disney World – which is the size of San Francisco – attracts an average of 58 million people. I mean not only is that more than double what San Francisco can do, it’s almost as many visitors as all of Italy. Now imagine there are six other Disney resorts around the world: Disneyland California, Tokyo Disney, Disneyland Paris, Hong Kong Disneyland and Shanghai Disneyland. Yet, even with all that scale, Disney’s “Parks, Experiences and Products” segment is still only its third largest revenue stream, after its primary bread-winner, “Media and Entertainment,” and then its “Linear Network,” or rather global cable network (meaning the Disney channel, ESPN, National Geographic, ABC etc). Then again, all you need is a single trip to Disney World and you’ll be wanting to hoard up on Disney stock.

Nevertheless, despite the magnificence of all that they have accomplished here – converting what was after all barren swampland into ‘The Most Magical Place on Earth’ – there is an undeniable price to pay for such reverie and it’s borne by you, dear parents. Yes, you’ll have fun and the happiness that this wonderful trip will elicit in your kids could well be considered priceless, but there is a price all the same, and it’s a steep one – not just in financial terms, the physical and mental strain deserve mention too and the latter is thanks in no small part to a sadistic new form of torture called the Disney app – more on that later though. So, the first and most important piece of advice we can give you is to plan your trip like a commander going into battle: research everything about the park; decide where you want to visit each day; see which rides appeal to you most; ascertain which ones have the longest queues, and then decide where they serve the best food and how much time you’re willing to take to eat. Next, you’d best forget about skimping and do this holiday justice, after all, this will probably be a once-in-a-lifetime thing so why not do it right? And that, above all, means booking yourself into the Four Seasons Orlando at Walt Disney World, the pinnacle of luxury for this town, which, let’s not forget, is a place that has targeted the middle class, almost exclusively, for decades. Rest assured that the Four Seasons Orlando is the only AAA Five Diamond-rated hotel in Central Florida, so don’t mess around: book a room here (they start at around 1,500 USD a night but come with connected living rooms equipped with pull-out sofa beds made for kids so you’ll only need one room).

The fact remains that when it opened towards the end of 2014, the Four Seasons Orlando was a game changer and it’s still every bit as impressive today as it was then. Having cost nearly 400 million USD to develop, the resort includes an impressive full-service spa, a golf course, three clay tennis courts, a multi-use basketball court, a splash zone and a family pool with a giant outdoor screen for twice-a-day “dive-in” Disney movies. There’s also a lazy river, two water slides, an adults-only pool, an electronic console room with a TV for each of the four game systems (called The Hideout) and a Kids4All camp that’s free for younger guests aged 4 to 12; not to mention a 500-kilogram starburst chandelier imported from the Czech Republic; marble bathrooms — which include an in-mirror television — and twice-daily housekeeping service (in the morning they put away the pull-out beds and in the evening they get them ready again). As it turns out, the Four Seasons is both a perfect complement, and an antidote, to Disney World, and it’s doing such a fabulous job on both fronts that the original developer just sold the 445-key resort for 600 million USD in May 2021 to Host, America’s largest lodging real estate investment trust.

ABOVE: The Disney app is a sadistic new form of torture for parents wanting to give their kids the best possible experience. The solution is to plan your attack like a commander going into battle. Leave nothing to chance and have back-up tactics for when you can’t get what you want.

Now, apart from the facilities and amenities already mentioned, we particularly appreciated the friendliness and helpfulness of everyone at the front desk (there’s an army of them), the bell boys (who you deal with on a daily basis given the need to shuttle to the parks and back), the concierge at the dedicated Disney Help desk (a godsend) and of course the staff at the various restaurants (who memorise all your preferences and allergies, making you feel as though you’re part of their family, and certainly not one of 445 keys).

Days start early when you’re at Disney World, especially given you’re allowed to enter the parks 30 minutes before the masses (a complimentary perk from the hotel). We only did three days, deciding upon Animal Kingdom, Magic Kingdom and then Epcot. (We left out Hollywood Studios, as we felt it appealed to older kids, and we also didn’t bother with the two water parks: Typhoon Lagoon and Blizzard Beach). Entrance tickets to the parks are about 120 USD a day, per person and you buy them through the Disney World app, which is easy enough. What is a total nightmare on the other hand is the app’s Genie+ (25 USD per person per day) and Lightning Lane (15 to 20 USD, per ride, per person, per day) extras, but they are an absolute necessity if you don’t want to waste your days in queues. Both of these (expensive) upgrades are only available from 7am on the day, for each day’s entry and from that moment on you become a slave to your phone, constantly needing to book the next ride from the moment you physically check into the first. It’s an incredibly frustrating experience and there simply must be a better way. Luckily however, your kids will be pretty oblivious to these hardships and they will have an absolute blast – as long as you get them strollers (we used kingdomstrollers.com). 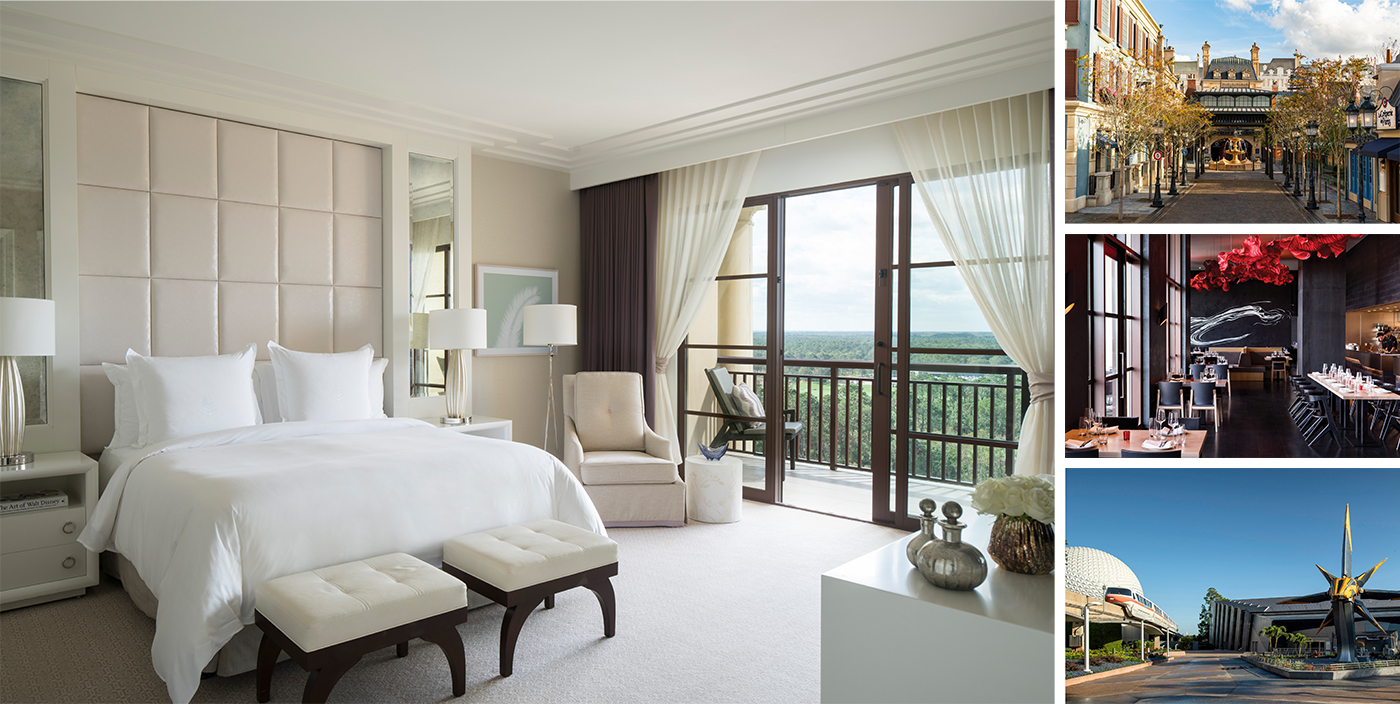 ABOVE LEFT: The rooms at the Four Seasons are spacious, tasteful and accomodate families. RIGHT TOP: Nestled in the France Pavilion at Epcot is the fantastic Remy’s Ratatouille Adventure. RIGHT CENTRE: Capa at the Four Seasons is a truly world class restaurant. RIGHT BOTTOM: The new ‘Guardians of the Galaxy: Cosmic Rewind’ is the best rollercoaster at Disney. This and ‘Avatar Flight of Passage’ at Animal Kingdom are absolute musts.

Now, if you’re really smart you will book this trip to be a week to ten days long. That way you won’t have to do a Disney Park every day, you will make use of the hotel’s many amenities and you will save your mental and physical strength for the days when you must go into battle mode. But, if like us, you only have three days to get it all done, then let us give you one last little titbit: there’s a magical machine in your Four Seasons room called Plum. It can be stocked with any two bottles of wine you like and not only does it keep an opened bottle fresh for up to three months, it means you only pay by the glass. Should you want an even better wine selection then head up to the top floor where you’ll find Capa, the hotel’s Michelin-starred 17th floor rooftop steakhouse and bar, which was frankly one of the best restaurants I’ve been to in years.

Going to Disney might well be a rite of passage for kids, but parents need a way of getting through it happily as well. God Bless the Four Seasons Orlando at Walt Disney World.

Official Bespoke flew to Orlando from Beirut on AIR FRANCE via CDG and JFK, and then back, via Atlanta and CDG. The tickets cost 2,000 USD a seat in economy, 3,000 USD in premium economy and 5,000 USD in business class. Disney World is mask-free once again, fully open and in the midst of a 50th anniversary celebration.