Places | Categories | Hotels | Is this Picture-Perfect Private Island in the Maldives really worth $45,000-a-night?
PLACES | Hotels 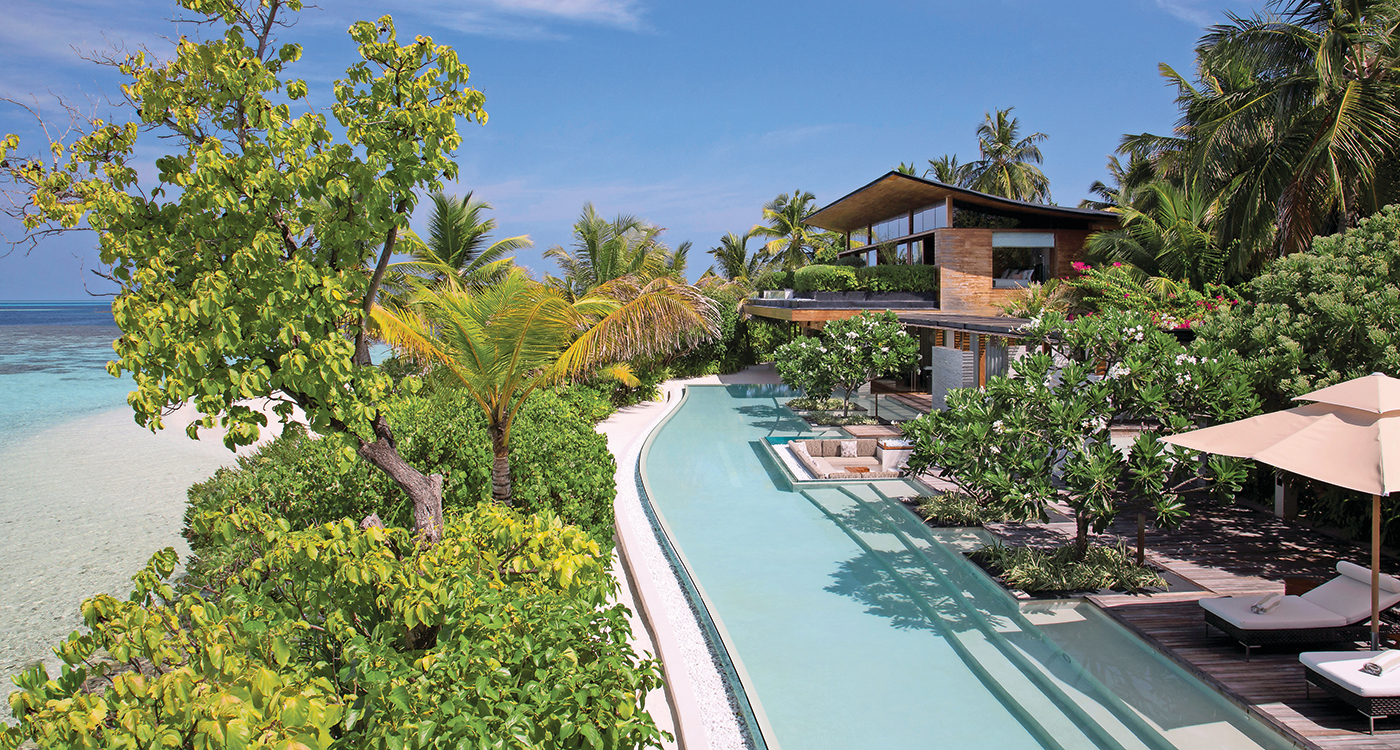 Is this Picture-Perfect Private Island in the Maldives really worth $45,000-a-night?
January 1, 2018 Warren Singh Bartlett

She was close enough to touch. Her skin, a rich, purplish black looked soft, almost velvety and as she drifted beneath me, her eyes swivelled back, watching what I was doing. She wasn’t alone. All around me, her companions swam. Some were as wide as a dining table, others even larger. I hung in the water unmoving as they passed over me, under me and to either side, all aware I was there, none of them concerned, some of them swooping around me as though they wanted to see if I could follow.

We were at a ‘cleaning station’, a spot in the ocean where Manta gather to allow tiny, minnow-like fishes to nibble away the parasites that attach themselves to their soft skin.
I thought of my sole experience with garra rufa, the Middle Eastern species used in those unethical fish ‘pedicure’ centres and wondered if the nibbling of these fishes also sent jolts of electricity through the mantas, for they were clearly enjoying the attention.

Certainly they were enjoying it enough not to mind ours, which was just as well because even though I could feel the sun burning my back, I was not minded to move. As relaxed and as playful as dolphins, the rays were magnificent and to be this close to an untamed creature in the wild was magical.

But then so far, everything had been, well, with the exception of the flight over, when I found myself briefly in Hell, smack dab in a ring of squalling babies. But all traces of irritation had evaporated upon landing.

Velana International, the shed-like airport occupying the island opposite the capital, Malé, a curious, cramped town that out of necessity, rises abruptly and vertically from the limpid Laccadive Sea like a mechanical fortress, felt so suitably tropical, I could feel myself growing a Hawaiian shirt.

Emerging from the seething masses at immigration, we walked straight out onto the docks and hopped aboard a lemon yellow speedboat, where we were handed a cold towel and a frosty mocktail for refreshment (outside the resorts, alcohol is strictly forbidden in the Maldives), and then we rocketed north across the cyan seas towards the tiny island of Kuda Hithi in the North Malé Atoll. 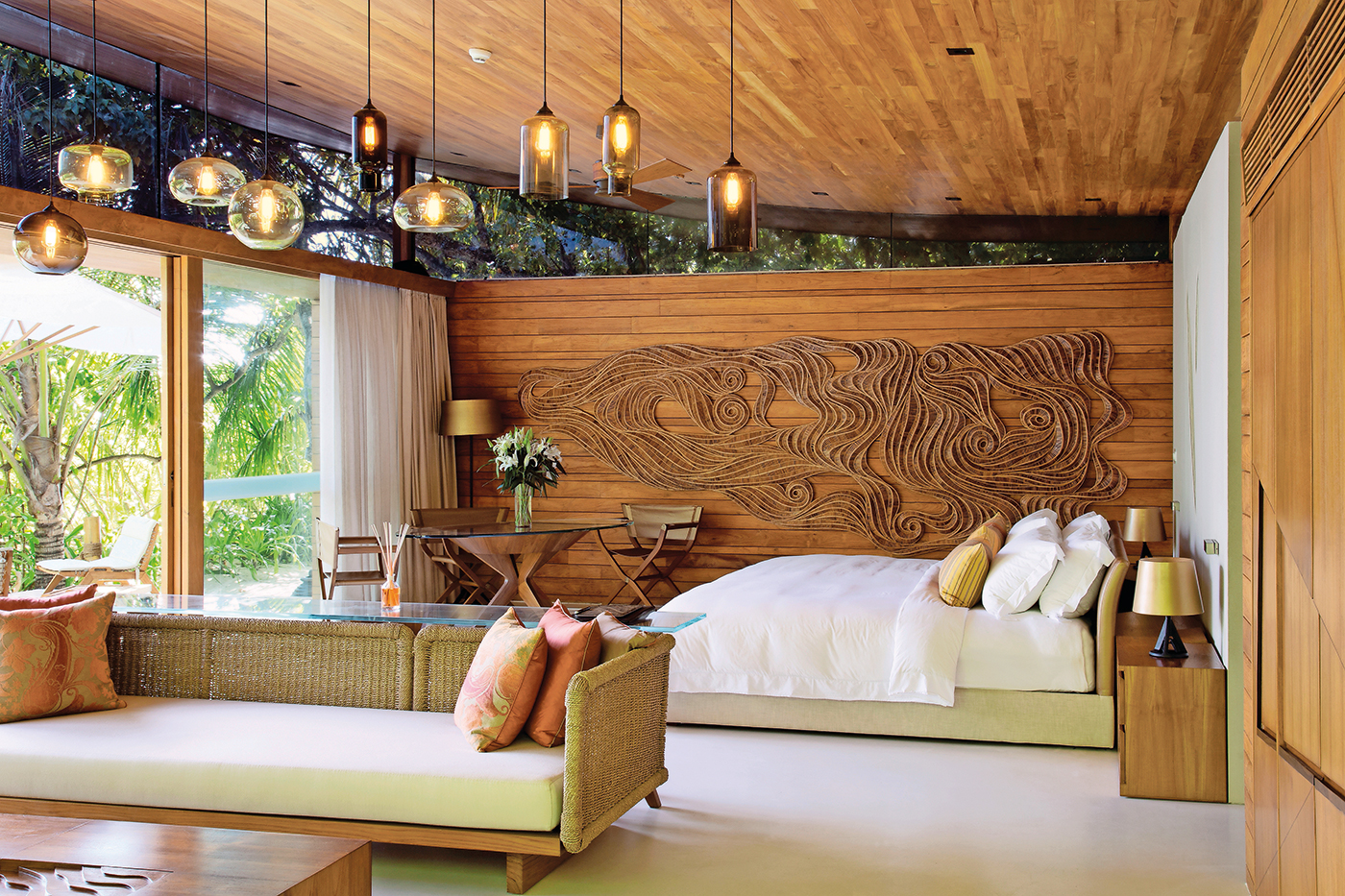 The only entirely private island in the Maldives, Kuda Hithi is home to Coco Privé, a sophisticated bolthole favoured by the kind of people who don’t want to share their tropical idyll with strangers. Between five villas and the expansive main house, which comes complete with a dip pool and Jacuzzi on the first floor terrace, the resort can sleep up to 12 but regardless of the size of their party, guests must book the entire island.

At 45,000 USD a night, that kind of exclusivity doesn’t come cheap but at least the price is all-inclusive – open bar and unlimited food prepared to your specifications by Chef Neel, round-the-clock massage and wellness treatments, an array of watersports options, outings to dive sites, catamaran sailing, big game fishing, sandbank picnics, sunrise breakfast cruises, dolphin spotting, yoga and fitness training at a state-of-the-art indoor gym and the outdoor jungle gym, laundry, outdoor cinema nights and an invisible but seemingly ever-present staff, that are on hand to meet your each and every wish. 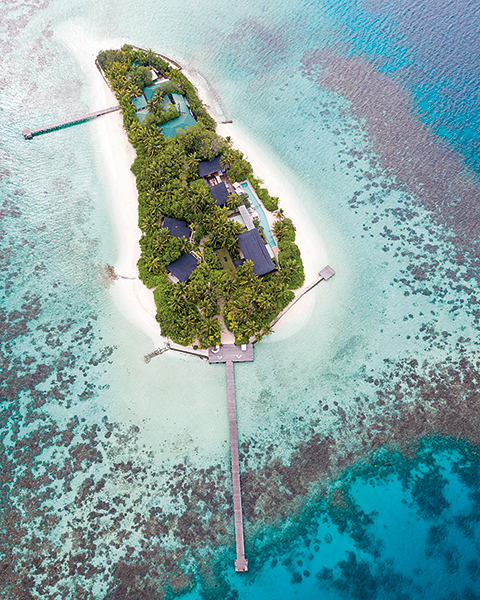 And of course, to greet you upon arrival. Even before our boat pulled up to the jetty, we could hear the sound of drums and there, waiting for us to dock was Island manager Andrew Stuart Mclaren, accompanied by a bevvy of smiling staff, waiting to hand us more cool, scented towels and a welcome drink. Parasols held over our heads, we were preceded into the trees by our drummer, the gentle beat underscoring the sound of the waves, the wind in the palms and the cry of wild birds. We might not have arrived by seaplane but I felt like I had just been welcomed to Fantasy Island.

Kuda Hithi is owned by the Hilmy family and on the first night, we enjoyed a torch-lit dinner on the beach with the knowledgeable and welcoming Sarah Hilmy, daughter of Hussain, the man who almost singlehandedly set the Maldives on the path to becoming the luxury destination it is today. Now oriented towards the higher-end traveller, the islands were once a Hippie paradise of beach huts and topless bathing and even as late as the 1980s, the Maldives were still more oriented towards the backpacking crowd.

Building a boutique property that looked like a rustic hideaway but lived like a five star property, Hilmy and his three brothers proved those who said the islands would never attract the luxury crowd wrong and it wasn’t long before their success began to attract the kind of big, global brands that dominate the islands today.

The Coco Collection, as the Hilmys’ properties are known, started with Dhuni Kolhu, which pioneered the country’s first luxury spa, and introduced villa plunge pools to the market, and then added the 100-villa Bodu Hithi and the ultra exclusive jewel of their crown, Kuda Hithi, a few years later. Sarah Hilmy reveals that, at the beginning, her father’s plans to turn Kuda Hithi into Coco Privé left a lot of people baffled and they accused him of being insane. But, while other resorts promise ‘private’ experiences, usually at villas isolated from the rest of the resort, for the duration of your stay, Coco Privé is the only one that can be yours and yours alone. To be honest, even full, it is entirely possible to not see another soul all day and that’s the unique selling proposition that has helped it find huge demand within the ultra high net worth segment.

Designed by architect Guz Wilkinson, whose other projects include an intimate hotel in Kenya’s Rift Valley and a number of private urban oasis projects in Singapore like Jalan Sampurna House and the Meera Sky Garden, the residences blend an Arts and Crafts sensibility with soft Modernism and Island touches.

Surrounded by a lush native forest of coconut palms, sea hibiscus, papaya, frangipani and banana trees, Wilkinson’s design places Nature centre-stage. Floor-to-ceiling windows, which can be completely rolled back, instantly obliterate the distinction between indoors and out, ushering the sounds and fragrances of the forest and sea into rooms. With terrestrial wildlife restricted to birds, butterflies and the occasional gecko, there’s no reason to keep them closed and while it might seem counterintuitive, a constant night sea breeze and judicious mosquito control mean that sleeping with the air-conditioning off and the windows wide open is both possible and a pleasure.

Those who prefer their water unsalted can bathe in the 40-metre glass-walled pool in front of the main residence, as perfectly suited to laps as it is to lounging on an oversized float, in the wraparound dip pools at the two more secluded villas on the opposite side of the island or luxuriate in the private outdoor shower/baths.

Two days, which at first seemed barely long enough, instead felt pleasingly comprehensive, possibly because so much was packed so unhurriedly into each day. Snorkelling over reefs, dolphin watching, swimming with manta rays, reading in the over-water hanging bed-basket, lazing in the hammocks rocked by the sea-breeze, drinking champagne in the Jacuzzi, wandering the beaches, floating in the impossibly blue sea and a succession of breakfasts, lunches and dinners outdoors, beneath the trees, on the sand and under the stars, time slowed and then blissfully, ground to a halt.

From the second I arrived to the second I left, my only footwear were flippers and so used did I grow to the feel of cool, white sand and the rough boards of the jetty beneath my feet, that when it came time to put on my shoes again, I felt like I was putting them on for the very first time.
Paradise found.