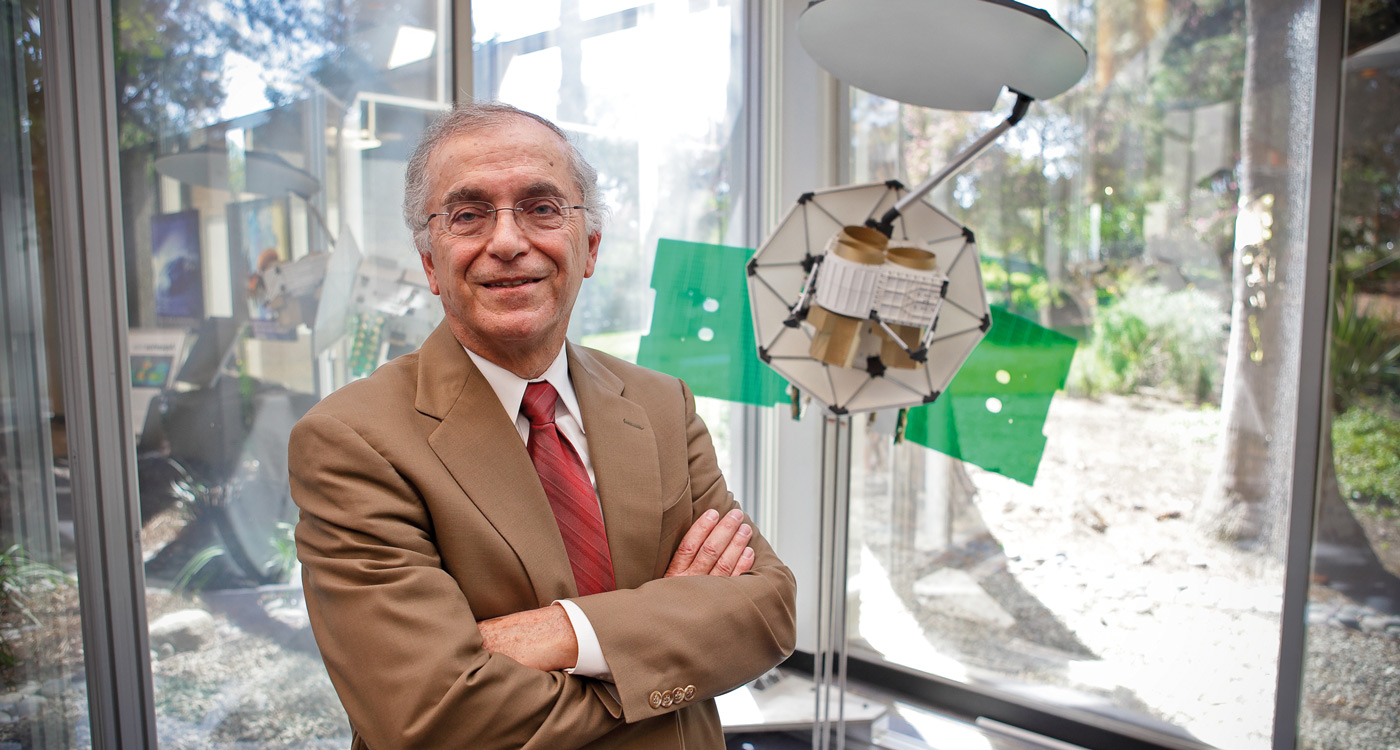 America’s capability in space was proven this August when a one-tonne plutonium-powered rover successfully landed on Mars. The Arab world can take equal pride in the landing because it was Lebanese-American, Dr. Charles Elachi, who headed the mission. Meet the man himself.

It’s smiles all around at the Jet Propulsion Laboratory campus in the crumpled beige foothills of San Gabriel, northwest of Pasadena. I’m about to enter a reasonably high security area – the National Aeronautics and Space Administration (NASA, to you and me) is both high-powered research centre and U.S. governmental agency – but aside from a quick check of my name against the list at the main gate (it’s there, thankfully) and a flip through my passport to make sure I’m really me, I’m in, with minimal hassle. So efficient, these Americans.

Inside, the smiles get wider. As I wait for my temporary ID to be issued, a 50-something scientist walks over and starts cracking jokes with the laughing receptionist. An off-duty caretaker joins in and drags a couple more passersby into the hubbub. I’m not sure what I expected but certainly nothing quite this collegiate. It’s all so jocular and back-thumpingly cheery that I’m soon smiling along and by the time my guide Alan arrives, I’m half expecting to witness a spontaneous outburst of high-fiving. 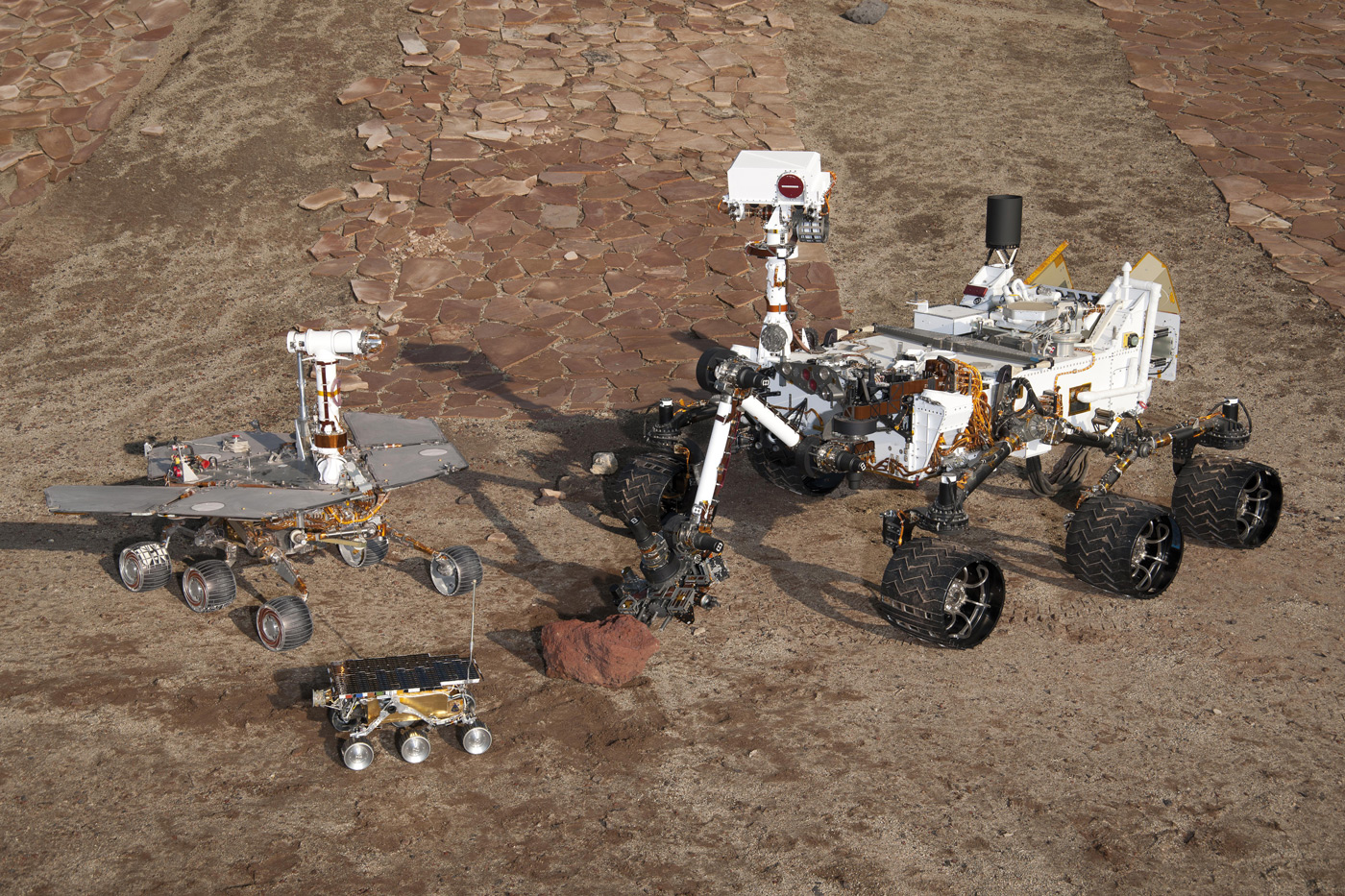 Three generations of NASA Mars rovers. At the right is Curiosity (2012), centre is Sojourner (1997) and left is Mars Exploration (Spirit and Opportunity, 2004).

But then the men and women at the JPL have plenty to smile about. Just two weeks before my visit, they successfully landed the largest robotic rover ever launched into space. When all 899 kilogrammes of Curiosity touched down on Mars intact after an 8.5 month, 523 million kilometre journey, it did so after managing to decelerate from 21,000 km/h to 0 in just 7 minutes. Best of all, it had landed smack in target range.

Judging by the elation displayed in the control room the morning of the landing – Curiosity’s final approach was broadcast live over the internet to tens of millions around the world – the whoops of delight must have been audible in downtown Los Angeles. Understandably. As feats go, this one was magnificent.

“It’s like hitting a golf ball in Dubai and getting it to land in St. Andrews,” JPL Director Dr. Charles Elachi explains to me, when I ask for a terrestrial analogy. “Not only that, but the ball has to land straight into a cup. And the cup is moving.” He beams. One of the most visibly delighted observers that night (around 2.6 billion USD delighted, I imagine), Dr. Elachi still radiates pride in the lab’s achievement.

It’s all a long, long way from Rayak. Born and brought up in the central Beka’a and now a U.S. citizen, Elachi maintains his ties to the region by serving on the boards of LAU [Lebanese American University], KAUST [King Abdullah University of Science and Technology] and KFUPM [King Fahd University of Petroleum and Minerals]. And he still speaks with the faintest trace of a Lebanese accent.

“The sky in the Middle East is beautiful and I used to like sleeping outdoors, to look at the stars,” he says, adding that his love of space dates back to childhood. “I remember hearing about the launch of Sputnik and listening to the transmission of its ‘beeps’ on the radio. I was fascinated.”

While crediting encouraging parents and inspiring science teachers for his eventual pursuit of engineering, Elachi first studied in France before undertaking a PhD in America. Getting offers from both MIT and Caltech, he opted for the latter because, he jokes, when he looked at the map, it was closer to Hollywood.

It was at Caltech that the JPL entered Elachi’s life. He’d read about the lab in Lebanon, in a magazine then distributed by the U.S. embassy but he had no idea it was part of Caltech until he’d arrived. Joining as an intern in 1970, he was immediately hooked. Thirty-one years later, and after decades of contributing to the fields of remote sensing, electromagnetic theory and space imaging, Charles Elachi was appointed director of JPL. Three years later, he began to oversee preparations for the Mars Curiosity mission.

If you’ve ever wondered why NASA is so interested in Mars, the answer is three-fold. First, the planet is close. Second, while it looks completely different to the Earth today, our two planets are believed to have formed at roughly at the same time and findings suggest Mars once had saltwater oceans and a thicker atmosphere. Third, given our understanding of the conditions that life needs to emerge, it’s the likeliest place in our solar system where we’ll find any traces, even if it’s just at the molecular level. The ramifications of such a discovery are likely to be, well, earth-shattering. But finding out that we really are not alone – even if our closest neighbour is a single-celled organism – is when the questions will really begin. Dr. Elachi elucidates.

“If life evolved on Mars, is it still there? If not, what happened to it? If it evolved, how far did it evolve? Is its DNA similar to ours? If it’s different, does that mean life doesn’t have to be carbon-based and oxygen-breathing? Could that mean there is life everywhere? Even where we think there isn’t?”

While Curiosity is a sophisticated piece of machinery, capable of conducting many different tests, it’s not as well equipped as the average laboratory on Earth. So NASA’s next priority is figuring out how to bring back samples from Mars. I point out that the process would be faster if we sent a manned mission. Surely a human team could cover more ground, do more analysis and would be quicker to spot potential places of interest? But to my disappointment, the man at the top of JPL doesn’t see that happening anytime soon.

CURIOSITY WORKED OUT AT AROUND 7 USD PER PERSON IN THE US. THAT’S LESS THAN THE COST OF A MOVIE TICKET AND I’M SURE MOST OF THE PEOPLE WHO WATCHED THE LANDING WILL AGREE THAT IT WAS BETTER THAN 90 PER CENT OF THE MOVIES THEY’VE WATCHED IN THE LAST YEAR.

Why? Well, there’s the distance. Going to the Moon is a 6 day round-trip. Mars is 9 months, one-way. Even if we ignore the problem of extended exposure to zero gravity (which weakens muscles and bones) and cosmic radiation (which causes genetic mutation), such an endeavour would still need to feed and bathe the crew, dispose of their waste, power the ship – all for a minimum of two years. Doing so means carrying a lot of cargo.

Additionally, Mars is harder to land on than the Moon. It doesn’t have an atmosphere thick enough to be helpful in aerobraking (like the Earth) but it has just enough of one to be a hindrance (unlike the Moon). Consequently, NASA doesn’t expect to undertake a manned mission much before 2035. That said, there are several private initiatives to reach Mars currently underway, the most promising of which is being funded by multi-billionaire Paypal founder and Tesla Motors visionary, Elon Musk.

Like me, Mr. Musk grew up with the promise we’d be living on Mars, or at least the Moon, by now and also like me, he feels disappointed we aren’t. Where we differ though, is that Elon Musk has the money to at least try to turn that promise into a reality and he is on record as stating that it is his intention to stand on Mars one day in person. Given the legislative embrace all space-faring nations have flung around space exploration, how, I ask the doctor, does NASA feel about the increasing involvement of private enterprise?

“Our role at NASA is to open up the frontiers that private enterprise will have trouble finding the money to fund,” he says, adding that Mr. Musk is a regular lunch partner. “After that, the commercial sector can take over and find ways to use what we’ve learned more efficiently. Maybe in time, we’ll turn Mars exploration over to the private sector and concentrate on reaching deeper space.”

This relationship, and more precisely, the multiple civilian uses to which NASA-developed technology is ultimately put to use by private developers – the technology that runs your smartphone, for example, was first developed by NASA a couple of decades ago as a way to keep in contact with its space probes – is one way Elachi deflects criticism of the costs the mission incurred. Another is to point out that 90 per cent of the way we now monitor our planet is only possible because of techniques and devices originally developed for use in space. By way of example, he talks of how his quest to perfect remote sensing lead to the discovery of traces of ancient water channels in the Egyptian desert, which not only suggested parallels with features already found on Mars but also briefly interested him in archaeology, which led, most spectacularly, to JPL’s discovery of Ubar, an until-then mythical city that had been buried for centuries beneath the sands of Oman’s stretch of the Empty Quarter. 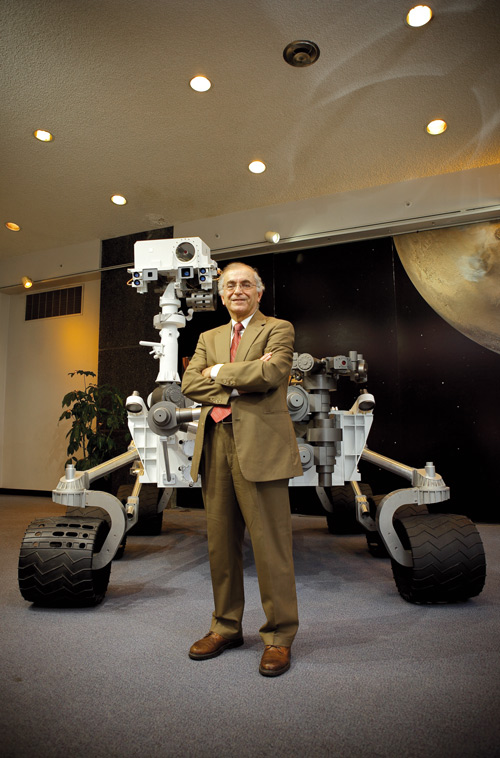 “Anyway,” the doctor says, returning the conversation to Mars, “Curiosity worked out at around 7 USD per person in the US. That’s less than the cost of a movie ticket and I’m sure most of the people who watched the landing will agree that it was better than 90 per cent of the movies they’ve watched in the last year.”

Not that there’s much criticism to deflect these days. Curiosity’s success has not only won the robot widespread popular acclaim, including a Twitter following of 1,155,768 (and counting), which is more than many living celebrities can boast but it has made the JPL the darling of NASA and landed the lab several hefty new contracts. But this shouldn’t overshadow JPL’s other achievements. The lab currently has over a dozen probes and satellites out there, including the one orbiting Mars that helped Curiosity to land.

Cassini-Huygens has discovered a mini-solar system forming around Saturn, the study of which may help explain how our own system evolved. Stardust has collected samples of ice from comets. Dawn has orbited Vesta and is now headed to Ceres, two of the largest asteroids in our system, leftovers from the age of planet formation. Eight others scan the Earth, monitoring tides, temperatures, ice caps and hurricanes. Meanwhile Voyager 1, launched in 1977, is now the farthest manmade object from the Earth. About to become the first human object to enter interstellar space, it’s still transmitting data.

That ultimately is the point. Data. As we learn more about the planets, we not only understand more about how the universe works, we also gain greater understanding of how our world works, of how we came to be and of what our position is, in the greater scheme of it all.

“In the last three years we have discovered literally thousands of planets and we now believe that planetary systems are very common,” Dr. Elachi says, adding that the next goal is to find a way to block out extraneous light to more clearly photograph these far-off bodies. “Then we’ll be able to scan for oxygen, water vapour, organic molecules. Life. Finding that life is common would be mind-altering for humanity.”

To say the least. For thousands of years, we’ve looked up at the Red Planet and wondered who, or what, was looking back. With the arrival of Curiosity, it’s possible we’ll find an answer to that question soon. “It looks different,” the doctor says, nodding towards a huge orbital photo of the planet as we walk to the lift. ”Now when I look at Mars, I don’t see something unknown. I see a planet on which every day, we leave more footprints.”