Products | Planes | The World’s 4 Best Beds in the Sky 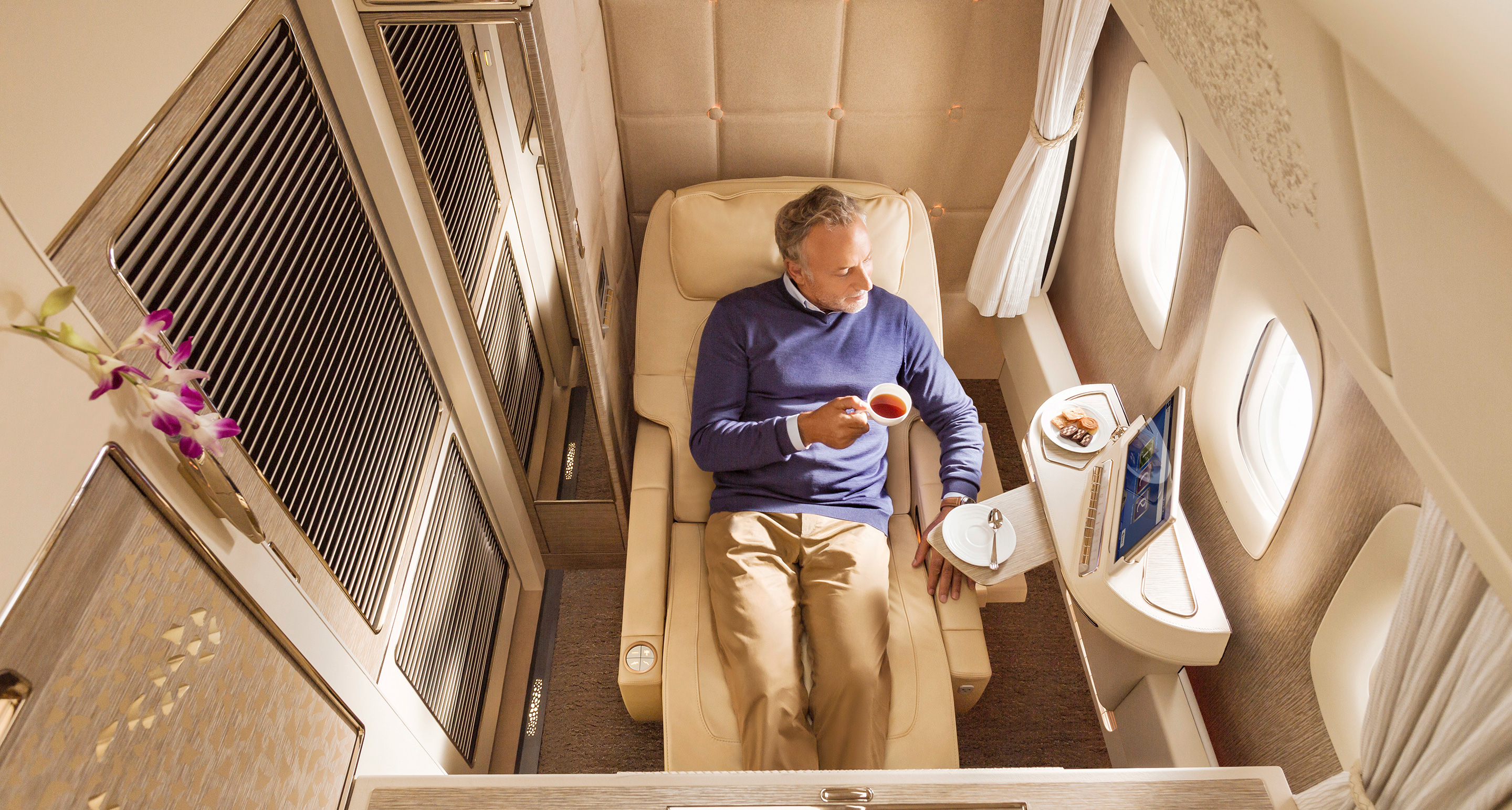 1. Qatar Airways Business Class
Qatar Airways has upped its game with the launch of Qsuites, offering tailorable configurations for business class travellers thanks to centre partitions that can be removed by the cabin crew. We like the idea of the airborne “family room” that seats up to four people, but love the option of the lie-flat double bed, as this is the first time such an option exists outside of first class.

The new configurations will soon be offered on all Boeing 777 and Airbus A350 jets, which fly the bulk of the carrier’s longest routes, and we’ve been informed that it’s already available on more than half a dozen planes with the rest of the fleet coming in for fit outs over the coming two years. 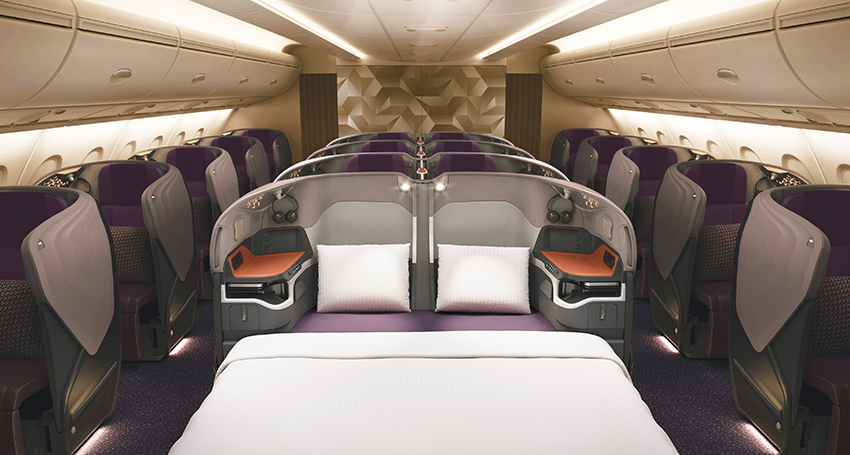 2. Singapore Airlines First Class
If you’re looking for the best double beds in the sky then look no further than Singapore Airlines. Following a major cabin overhaul in 2017, the airline’s new suites feature beds that lie perpendicular to the windows, and walls that can come down should you desire a king-sized hotel room in the sky.

As the beds are fixed, for safety reasons they’ve had to include a separate lounger, upholstered in Poltrona Frau leather, which you must sit on during take-off and landing, but it’s a handy addition during meal times too.

The suites are generous in size, especially if you’re combining two – you’ll have 9.3sqm of space in the couple’s format – our only gripe is that the bed is just 193cm in length and therefore not ideal for taller fliers. Then again, if your partner lets you sleep diagonally, you’ll have 2m36cm of majestic space! 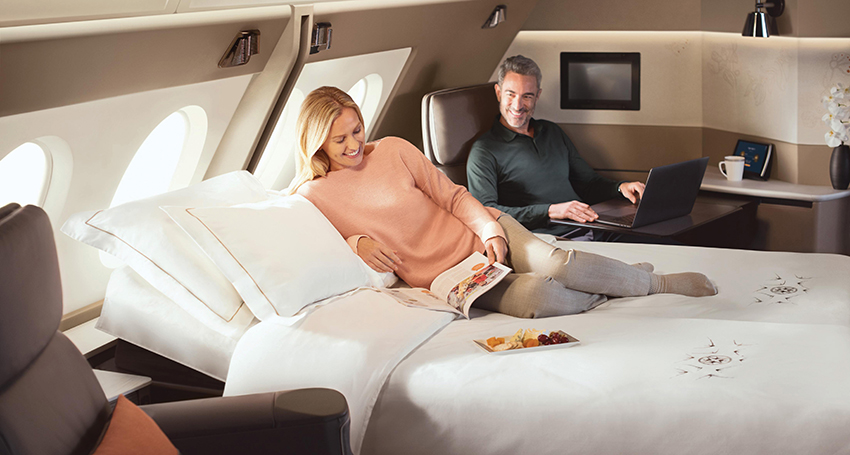 3. Emirates First Class
The crux of the matter is that Emirate’s newest suites are actually an evolution rather than a revolution because Emirates is sticking with a format that has proven mighty popular with distinguished flyers over the last decade and a half. What they did though is upgrade it with incremental refinement of almost every detail – from the floor-to-ceiling doors and walls, to a full-length cupboard for hanging your clothes, to mood lighting and temperature controls, to a handy pair of binoculars – so now it’s miles better in terms of privacy, comfort, and thoughtful luxury.

“Emirates pioneered the First Class private suite concept back in 2003, and today it’s the industry benchmark when it comes to first class travel,” announced Sir Tim Clark, the President of Emirates, at the Air Show unveiling.

There’ll be just six suites per Boeing 777, and besides the all-important doors, you can expect to find a new Mercedes-Benz-inspired colour scheme of soft greys, cream, and champagne (no more blingy lacquered bird’s eye maple veneers and faux-gold metal), a seat that can be placed in a new ‘zero-gravity’ position inspired by NASA technology to impart a feeling of weightlessness and relaxation, a 32-inch television with 2,500 channels, and even a butler’s window so you can be served drinks and small plates without being disturbed in the slightest.

The only possible oversight we could identify was the fact that Emirates has made no accommodation for couples, meaning you can’t combine two suites to make a larger one, and there’s no companion seat should you wish to dine face-to-face. Consequently, if you’d rather not ditch the spouse, then check out Singapore’s new first class suites. In every other way though, Emirates comes out a winner. 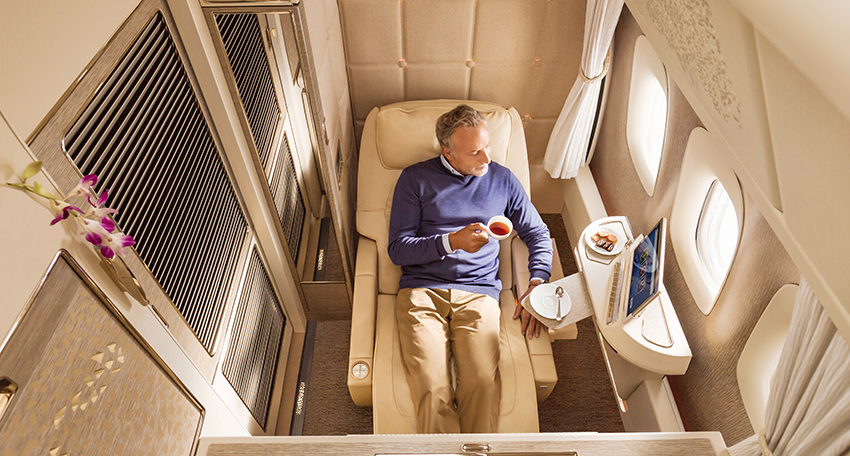 4. Air France La Premiere
Though there are just four suites (two singles on each window and a couple’s booth in the centre aisle), each of Air France’s La Premiere seate can be sectioned off with floor-to-ceiling curtains and, unlike on Emirates, there is space to eat with someone else. The subtle combination of ice blue and very light grey (contrasted wtih a pop of red) is sophisticated and harmonious, plus the materials are all noble: leather, suede, wood, metal and textile fabrics with a tweed trim. Then, when you’re ready to sleep, the crew will come and recline your seat and add an additional memory foam mattress to create a proper 200x77cm bed, complete with a Sofitel feather-down duvet and high thread-count sheets.

Okay, so the 24-inch TV may be trumped by Emirates’ 32-inch unit but unlike any other airline, Air France does not censor its video content; that way you can enjoy the movie just as the director intended you to. This is the best of France: there are Michelin-star-chef-prepared meals, exceptional wines, Bernardaud plates, Christofle glasses and flatware, as well as an amenity kit containing pyjamas and toiletries by Givenchy.

The first-class experience continues on the ground with a limousine service to and from the plane, plus access to the La Première lounge, which boasts a Biologique Recherche spa and an Alain Ducasse restaurant. 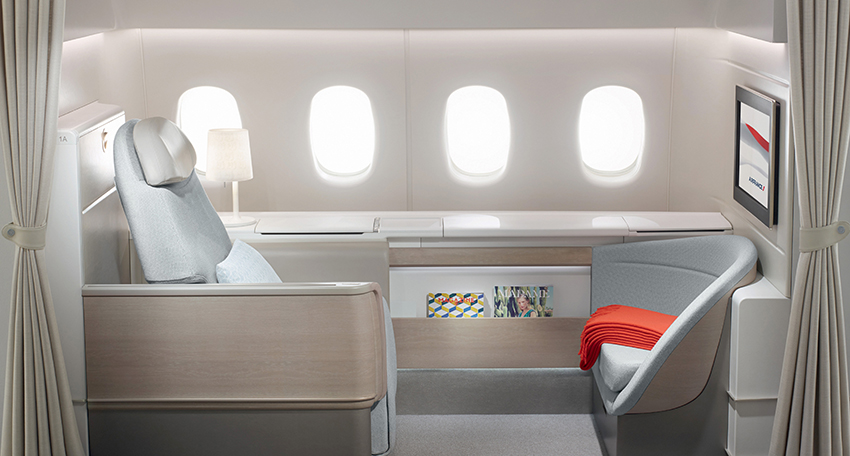