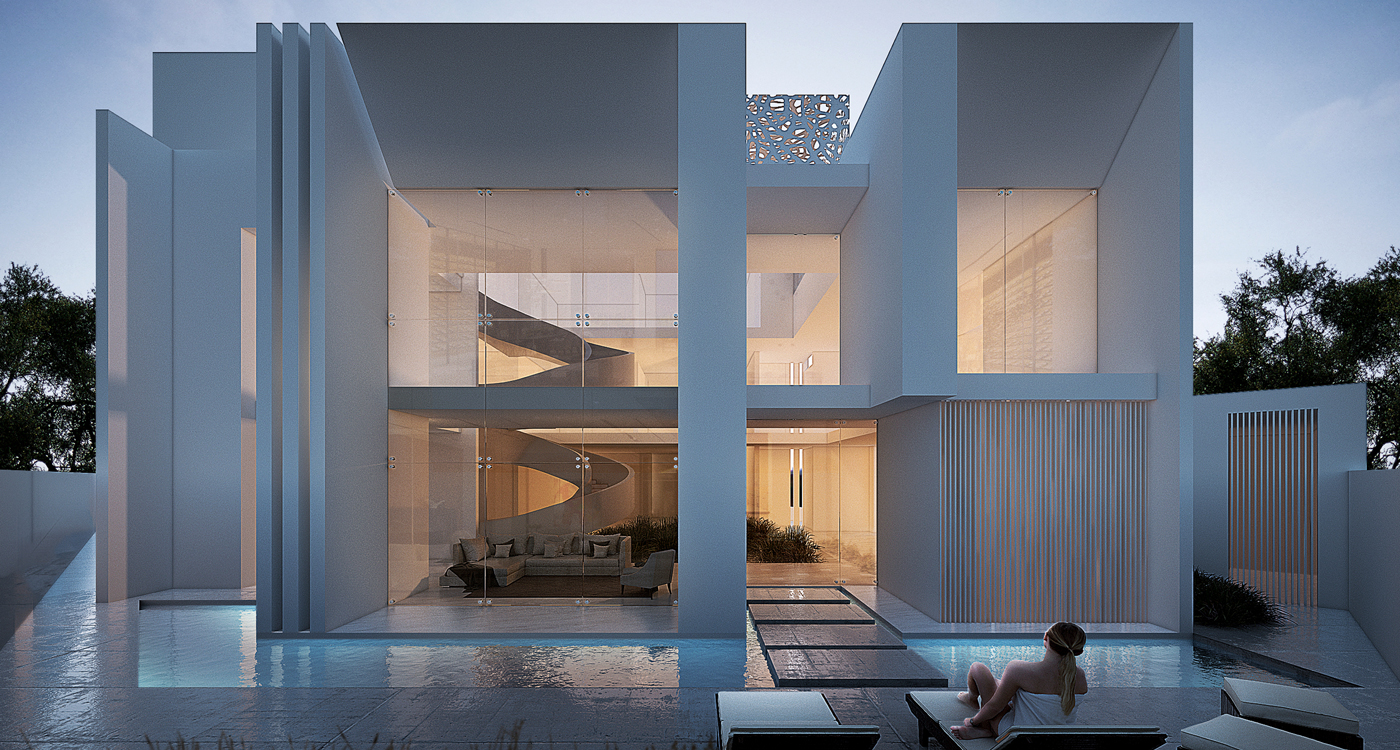 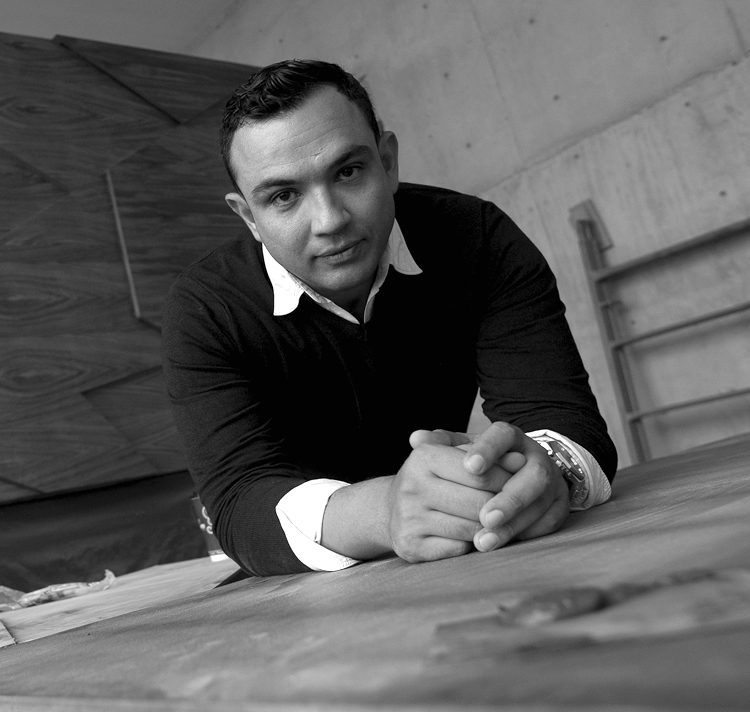 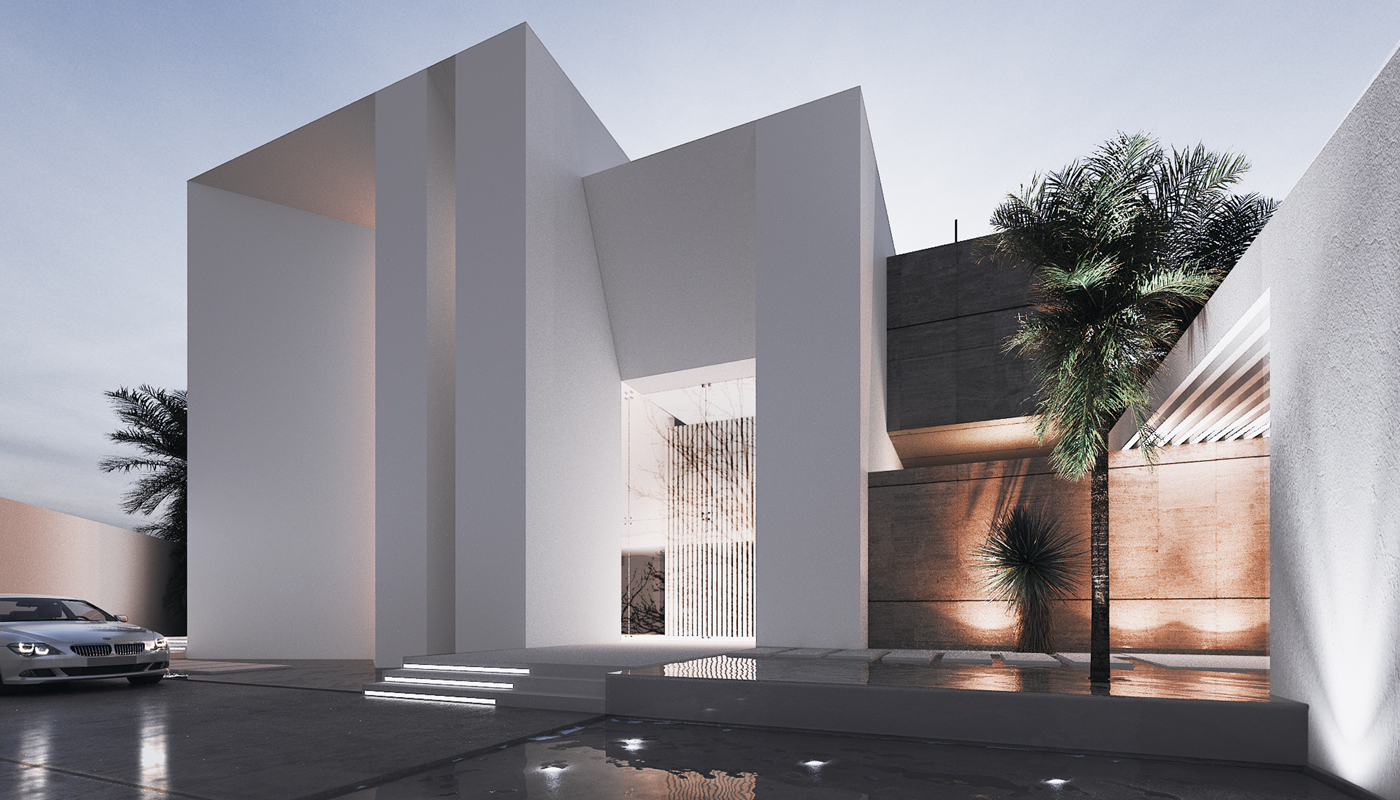 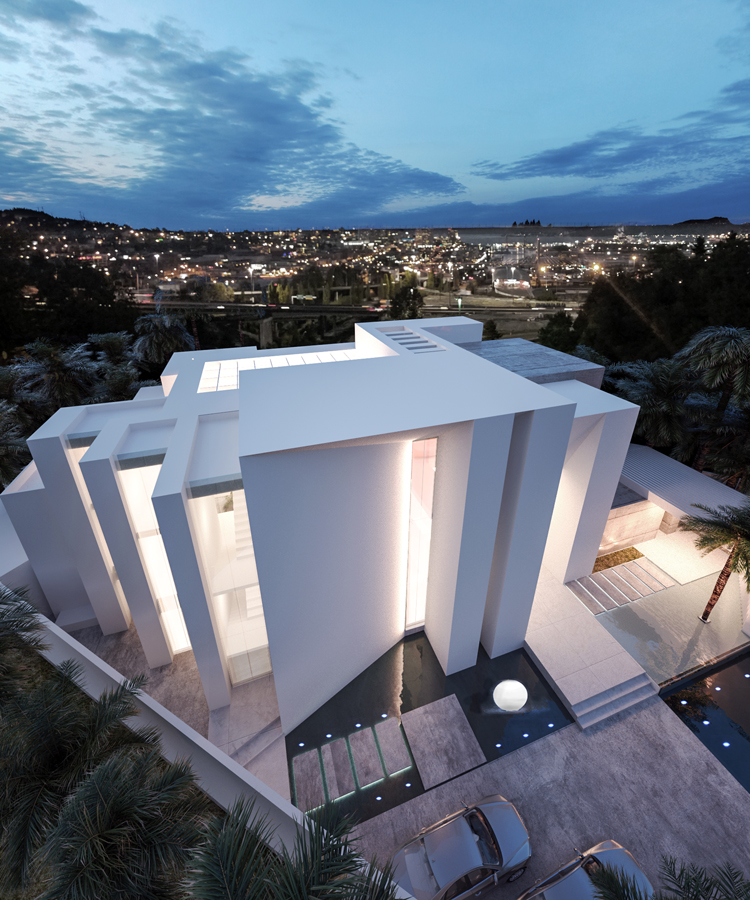 The port city of Jeddah, located on the shores of the Red Sea in western Saudi Arabia, is home to some of the country’s most spectacularly designed homes. But since virtually all of these extraordinary houses are hidden behind walls – privacy is of the utmost importance in the Kingdom – people driving by or visiting the city will never catch a glimpse of their beauty.
One such house is Fahad Jeddah, designed by Mexican architecture firm Creato. Fahad Jeddah is now in the final construction stages and scheduled to be completed sometime in summer 2018, but it promises to be a beacon of ultra-modern 21st century design.

“We provided the concept for the villa,” says architect Javier Cuevas, CEO and founder of Creato, “which consists of three floors with no basement and is surrounded by a courtyard.” The concept design took just under a year to complete, while the construction will run an estimated two years.

Designed for the Fahads, a Saudi family of four, the house will sport a light-coloured stone façade, in a shade with elegant gradations of white and grey. “It’s a special stone that’s extremely light, and it will cover 80 per cent of the façade,” says Cuevas. “The rest of the exterior and the interior will be in marble.”

One of the house’s most distinctive features, according to Cuevas, is its simplicity. “We did a really good job ensuring simplicity for the façade and the interior design,” he says. This simplicity may not be immediately apparent: rather than following the shape of a traditional square, the house is designed at a daring 45-degree angle, resulting in a structure that changes in volume, depending on your viewing point, while still showcasing pure, elegant lines. In fact, what distinguishes this house – and what ties it to other Creato projects – is the careful delineation of shape. The signature volumes and lines, which contrast with the stark landscape yet also seem to enhance its beauty, have never been seen before in this part of the world.

The interior layout of the house is relatively simple. The reception areas, living rooms, dining room and kitchen are on the ground floor. Then there are three bedrooms and bathrooms on the second floor and finally servants’ quarters, along with a guest bedroom and bath, on the third floor. In keeping with Saudi Arabia’s strict sex segregation codes, there are separate reception and living areas for men and women on the ground floor – only the dining room serves as a common space for both. 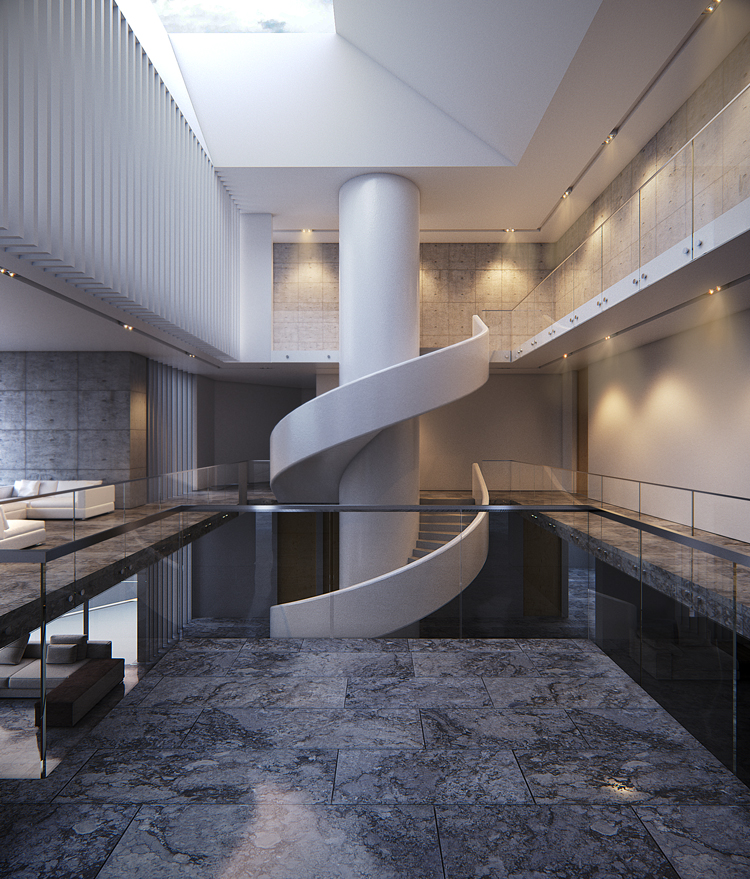 The floors are linked by a breathtaking spiral staircase, which serves as a sort of centrepiece for the house. The massive, oversized windows look onto a landscaped courtyard with a pool. “The courtyard was really important for the concept,” says Cuevas. “You can see it from various places in the house, from almost everywhere.”

While based in Mexico, Creato has designed residential and commercial spaces across the globe, including New York, France and the United Kingdom. The firm expanded into the Middle East just over two years ago, beginning with a private villa in Bahrain, and has since worked on projects throughout the region, in places such as Jordan, Abu Dhabi and Saudi Arabia. “The projects just came along,” says Cuevas. “We didn’t look for work in the Middle East. It just sort of happened.”

The bulk of Creato’s work is residential, although commercial projects are an increasingly important part of the firm’s portfolio. “Residential projects are my hobby,” says Cuevas. “I love to do residential, in the Middle East, Canada, Africa and different parts of the world. I really enjoy the direct contact with the client.” That said, Cuevas also realises the importance of diversifying his firm’s offerings. “We are also working on a development in Cancún [on Mexico’s Yucatán Peninsula]. It’s a big project with ten towers, a school, a hospital and restaurants, now under construction. I have a large team working on it.” This type of project also allows Cuevas to hone his skills in urban planning, which is a great passion of his.

With the great increase in Middle East-based architectural projects for his firm, Cuevas decided to set up an office in Dubai. Scheduled to open in 2018, the office will oversee all of the region’s developments and ensure that Cuevas and his team are closer to their Middle Eastern clients. Upcoming projects in the region include a residential compound in Saudi Arabia and a luxury villa for an Emirati prince in Abu Dhabi.

“People in the region want something different and fresh,” says Cuevas, “and they seems to like my concepts, especially the simplicity of the design and the proportions. And I enjoy working with my Middle Eastern clients.” 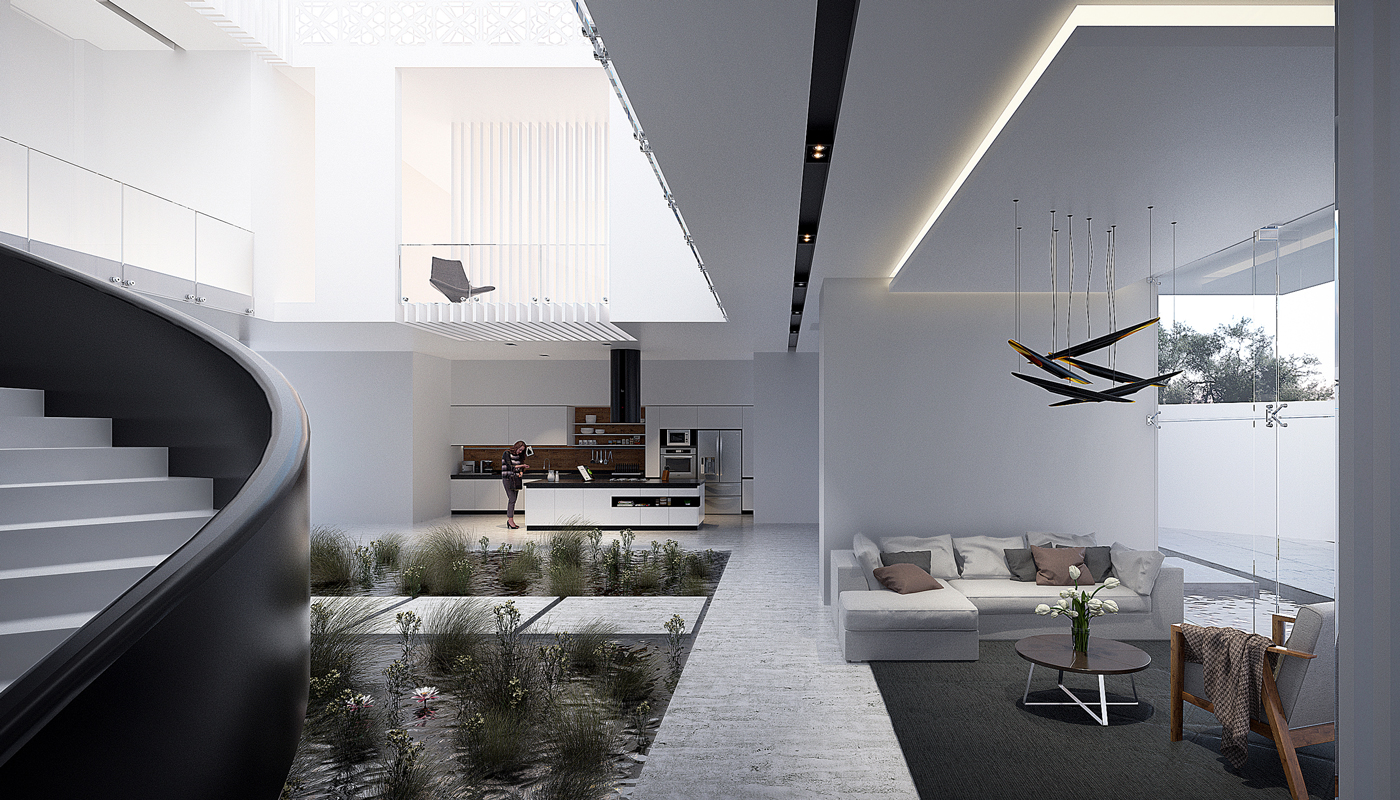