People | Insights | Francis Kurkdjian is a Globally Recognised Name in the World of Fragrances But Did You Know He’s Also Syrian-Armenian? 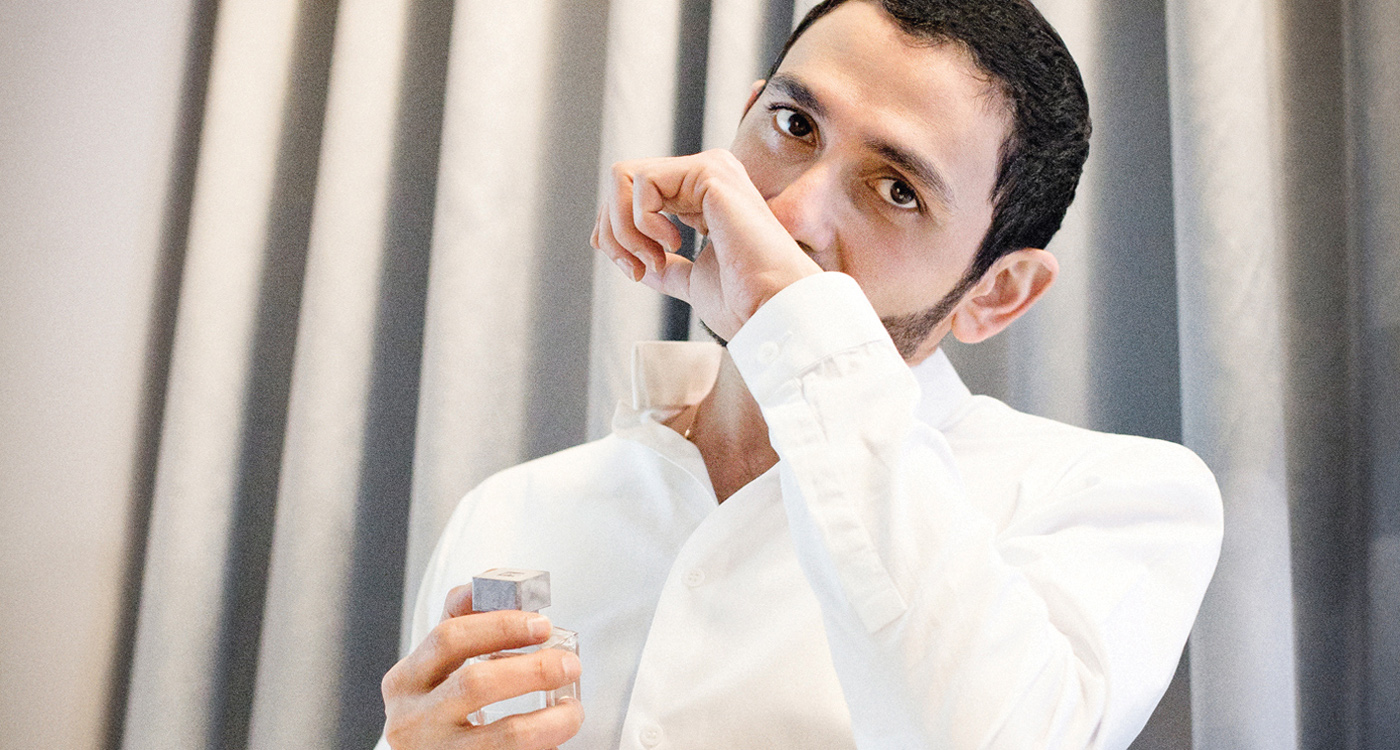 Francis Kurkdjian is a Globally Recognised Name in the World of Fragrances But Did You Know He's Also Syrian-Armenian?
February 1, 2015 Elisabeta Tudor 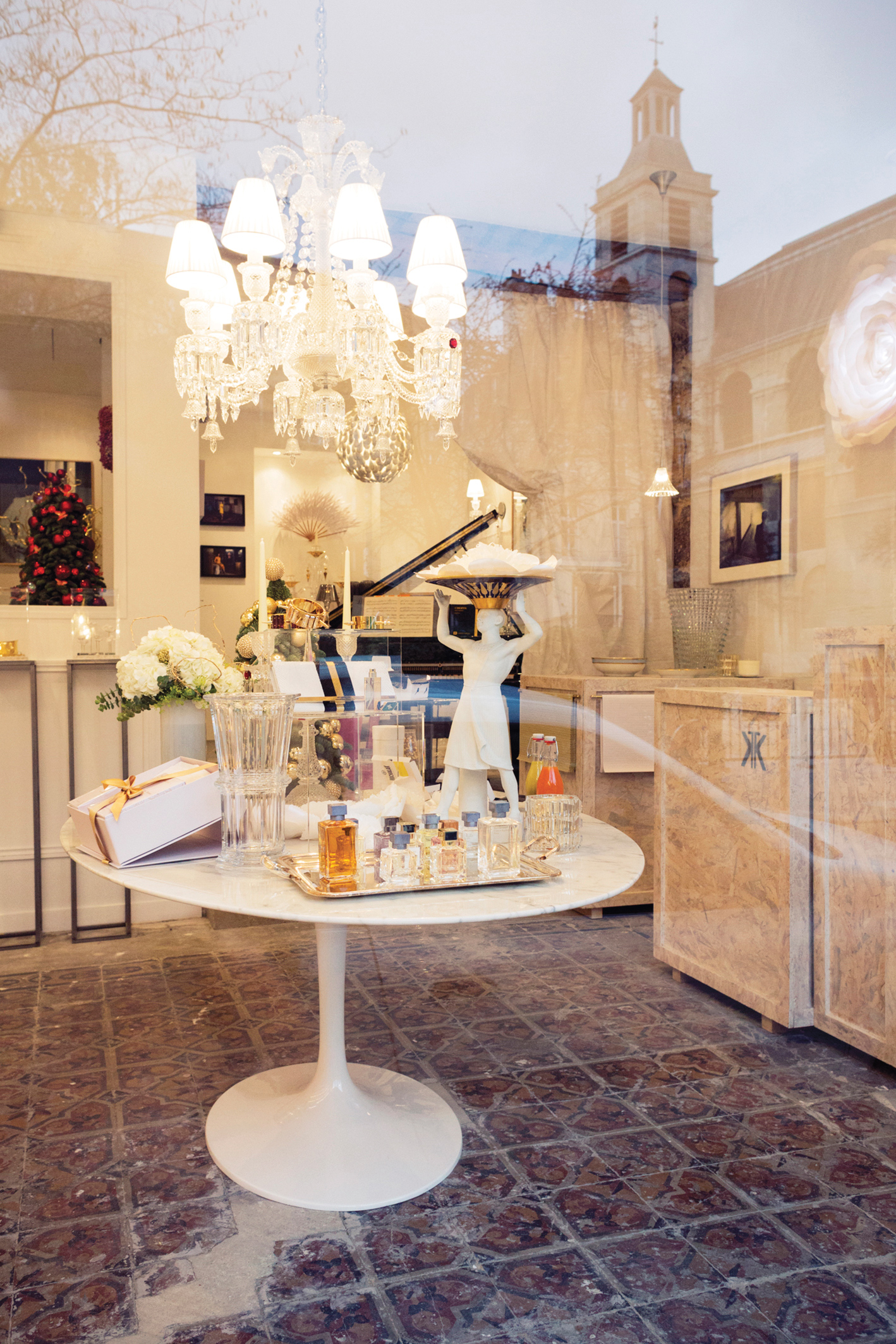 Kurkdjian describes their flagship store as having “borrowed the charm of old Parisian artisans” and it’s inspired by the city’s covered passageways and galleries.

Perfumer Francis Kurkdjian may hail from an Armenian family from Aleppo but everything else about him is resolutely French. Paris is where he started in the business, creating some of the most successful perfumes for major designers, it’s also where he co-founded the esteemed Maison Francis Kurkdjian.

It might be hard to believe, I know, but I’m sitting in a restaurant, on Paris’ right bank, with Francis Kurkdjian, one of the world’s most distinguished noses. If you aren’t familiar with him then I’m sure you are with his work: there’s Le Mâle, the wildly successful perfume Kurkdjian created for Jean-Paul Gaultier when he was only 26 years old, or then Fragile, Ma Dame and Le Beau Male, also for Gaultier. Many others followed: For Him by Narciso Rodriguez, Rumeur for Lanvin, Cologne for Dior, Kouros for Yves Saint Laurent, Rose Barbare for Guerlain, Le Parfume for Elie Saab.

“I have always been fascinated by the relationship between perfumery and Haute Couture, by the artisanal, beautiful side of perfumery,” Kurkdjian starts telling me, while he orders a café crème. “My interest in perfumery was born out of this fascination.”

Though it was a chance encounter that enabled Kurkdjian to establish his own perfume house – it was at a dinner following a Jean Paul Gaultier Haute Couture show in 2003 that he met Lebanese-French entrepreneur Marc Chaya who then became his business partner – chance has nothing to do with why he is a perfumer.

Interestingly, Kurkdjian could have ended up as a ballet dancer instead. He studied classical ballet and piano while growing up and still practices both today. But at 14, after failing to make it into the Paris Opera School of Dance in 1983, he fell back on another dream, that of becoming a perfumer, and a few years later, he was accepted at the pretigious ISIPCA in Versailles (Institut Supérieur International du Parfum, de la Cosmétique et de l’Aromatique Alimentaire).

“There is nothing scientific about perfumery,” Kurkdjian continues, pausing to look out of the window contemplatively, “nor is there any magic related to it. Perfumery is work. Every single perfume that I have ever created is a reflection of my experiences and every fragrance is fundamentally different from another one.”

In the twenty years he has been in the business, Kurkdjian has created more than 40 perfumes for luxury and fashion brands. He also opened his own bespoke fragrances atelier as early as 2001, before it became a common concept in the industry. When I ask him if the frenetic pace of the luxury industry has affected his work as a perfumer, he responds, “I am in competition today with people and brands who play the game of overconsumption, I cannot follow that pace. And I don’t even want to” – it’s worth mentioning that Kurkdjian can spend up to a year on a single perfume – “It might seem risky to some, the fact that we [at Maison Francis Kurkdjian] don’t follow this rhythm but we’re in the here-and-now nevertheless, always moving forward. What matters to me most is the evolution itself, since there is nothing ‘traditional’ in my creations, and to be honest, I quiet dislike this term,” he pauses and then breaks into a smile. “We’re living in the 21st century after all, the world is moving and we are experiencing many paradoxes, including the beauty and horror of our times. I want to be part of it. I don’t have nine lives, I want to enjoy the one I have and make it last.”

Perhaps this is why Kurkdjian likes to work as an artist too, by creating incredible experiences, such as his gigantic olfactory installations and perfumed performance spectacles like the nocturnal water-shows at Versailles. Besides perfumes and art shows, Maison Francis Kurkdjian also creates scented products such as leather bags and cardholders, candles and luxury spa items.

When I get introduced to his partner-in-crime, Marc Chaya, the CEO, an hour later at the Maison’s headquarters, which is just a stone’s throw from

Place Vendôme, he elaborates on this eclectic approach. “We’ve been taking risks since the very beginning,” he says – here, he’s referring to founding the brand in 2009, in the middle of a global economic crisis and in an industry that, according to Chaya, left little room for the perfumer. “Francis is more than just a perfumer though,” he adds, “he’s a visionary.” 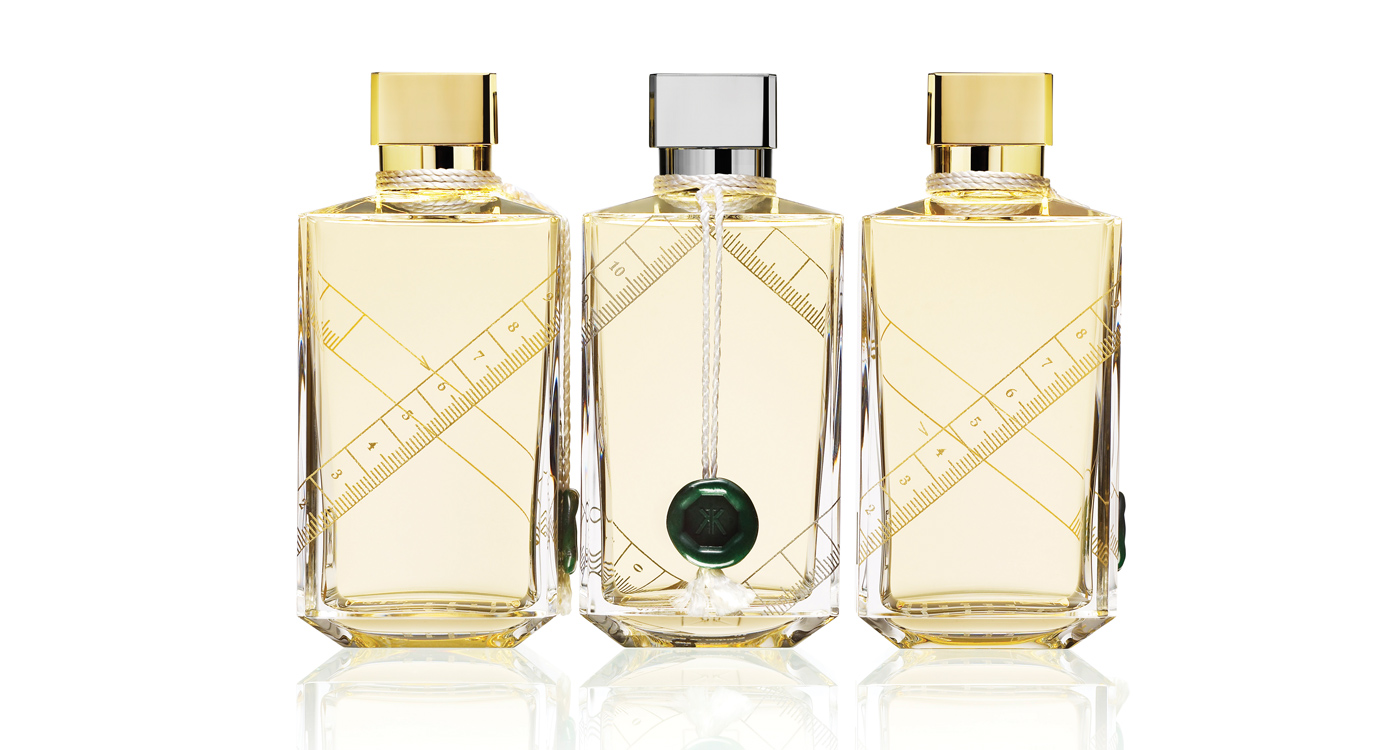 Limited to just 20 examples and presented in Saint-Louis crystal bottles, the Edition Cristal was launched to celebrate ten years of bespoke perfumes, which start at 17,000 USD.

But what exactly is this vision that distinguishes Kurkdjian from the competition? According to Chaya, “It’s legitimate for an artist to express himself freely. This was the case for perfumers in Paris back in the day – think of Guerlain, Fragonard, Coty, and many others. But perfumers eventually gave away their names to fashion houses, which in turn sold their rights through licensing agreements. Essentially, marketing teams are responsible for the product’s identity now and the perfumer has ended up in the back-office of his own creations. What we have done is to put Francis at the heart of everything. He is pushing the boundaries of his own métier.”

WHAT MATTERS TO ME MOST IS EVOLUTION, SINCE THERE IS NOTHING ‘TRADITIONAL’ IN MY CREATIONS. THE WORLD IS MOVING AND WE ARE EXPERIENCING MANY PARADOXES, INCLUDING THE BEAUTY AND HORROR OF OUR TIMES. I WANT TO BE PART OF IT.

Back to the small Parisian café, Kurkdjian recounts an example of just how he is pushing the boundaries. In 2003, he collaborated with the established French artist Sophie Calle in ‘L’Odeur de l’Argent’ (The Smell of Money), as part of a special event organised by the Fondation Cartier pour l’Art Contemporain.

“It was about recreating the smell of banknotes,” Kurdjian explains, “The project amused me, I enjoyed the idea, her offbeat humour and the impertinent challenge that this project suggested.” 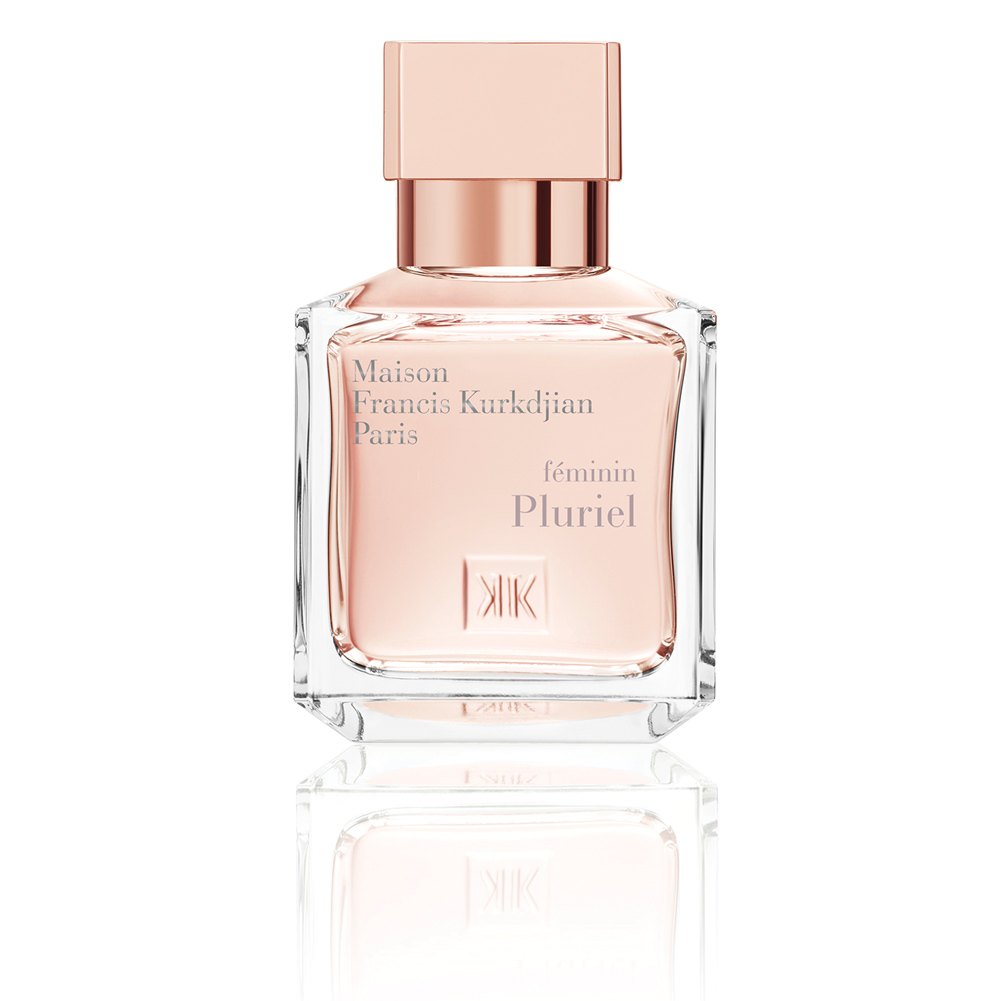 Pluriel Féminin, is styled as a grand, modern floral bouquet.

History is also a major facet of Kurkdjian’s work. While remaining contemporary and in the “here-and-now” with his own scents – À La Rose being his latest whimsical and highly feminine fragrance – he’s very interested in exploring the past and the opportunities an appreciation of history and legacy presents. For example, in 2005, he worked on the reconstruction of Marie-Antoinette’s perfume for the Château de Versailles, which had him looking back to the sources of perfumery in the early 17th century. “History is more important than tradition. Tradition freezes, but history evolves, it repeats itself, it changes. In this sense, the re-creation of Marie Antoinette’s perfume helped me learn more about myself and my profession. It was also a project that aimed to analyse the psychology of the perfumer when he starts to compose a fragrance,” he adds, noting that, quite by chance, Sofia Coppola’s film on Marie-Antoinette was released soon after.

Marc Chaya, on the other hand, looks more toward the future. “The Middle East is our current challenge,” he tells me. “We created our first oud perfume three years ago and added the Oud Mood collection in 2013. We started with one selling point in Kuwait three years ago, and we’ve moved to Saudi Arabia last year, where we now have four points of sale: in Riyadh at Fashion Village, Harvey Nichols, O100 and at Palais Royal in Jeddah. As of today, we’ve signed for a new shop-in-shop with Qatar’s Blue Salon, planned four personalised corners at Paris Gallery and we also have UAE-based corner and boutique projects in-the-making.”

In addition to Kurkdjian’s Syrian-Armenian roots, the maison has another link to the Middle East in that Chaya is Lebanese. He was raised in Beirut and moved to France for business school. After a Masters in Banking and Finance from the Sorbonne, he worked with Ernst & Young, starting out as an auditor at the age of 24, before becoming a partner in just nine years – it normally takes 15. He was then appointed Global Telecommunications Markets leader when he was just 32. Clearly the business mind behind Maison Francis Kurkdjian, Chaya is also someone with a passion for the arts, which he explains is why he decided to set up this entrepreneurial venture with Kurkdjian in the first place.

While Chaya muses about further openings, Kurkdjian seems to have something else on his mind. “Dancing,” he divulges. “It has always been a passion,” he continues, “the requirement of perfection is what characterises both perfumery and dance. It’s about giving your all to strive for perfection. And to let discipline transcend into lightness.”