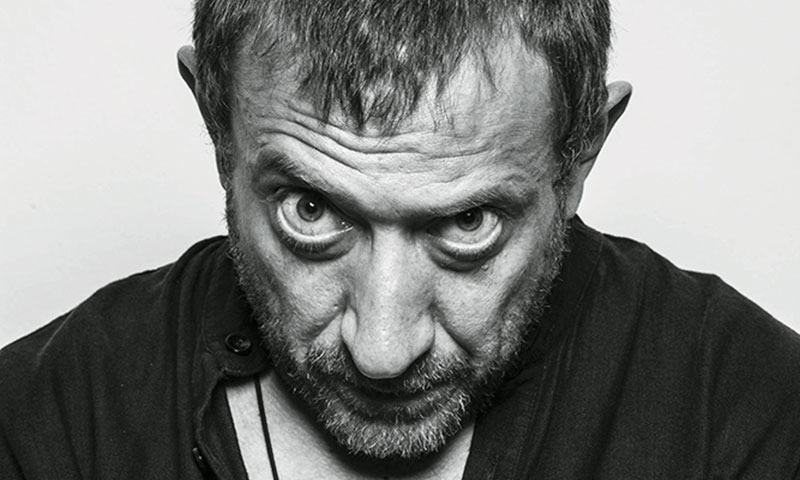 If architecture is the expression of a civilisation, then one might get a sense of the angst and ingenuity of our times by looking at the work of Bernard Khoury. Known for his rebellious approach, sharp rhetoric and unconventional buildings, the Lebanese architect might well have his own architectural movement once it’s all said and done. It might be coined something like Catastrophic, Sarcastic, or perhaps even Masochistic architecture – terms he uses often and also good descriptors for some of the feeling his projects elicit.

Although he’d seemingly rather we forget it, Khoury’s oeuvre begins with B018, an edgy Beirut nightclub designed in 1998. Conjuring scenes from Mad Max, it consists of a circular concrete slab, slightly elevated from ground level and wrapped in metal sheets. The entrance leads to a deep underground, rectangular-shaped club that some call coffin-shaped. Thickening the plot (pun intended), the nightclub was built in the industrial Karantina area of the city, close to the Port of Beirut, where on January 18th, 1976, in the early days of the Lebanese Civil War, right-wing militias slaughtered Palestinian refugees camped up in the area. Khoury has a strong memory of the event and recounts how he even saw the camp in flames as he drove by in the back seat of his mother’s car. 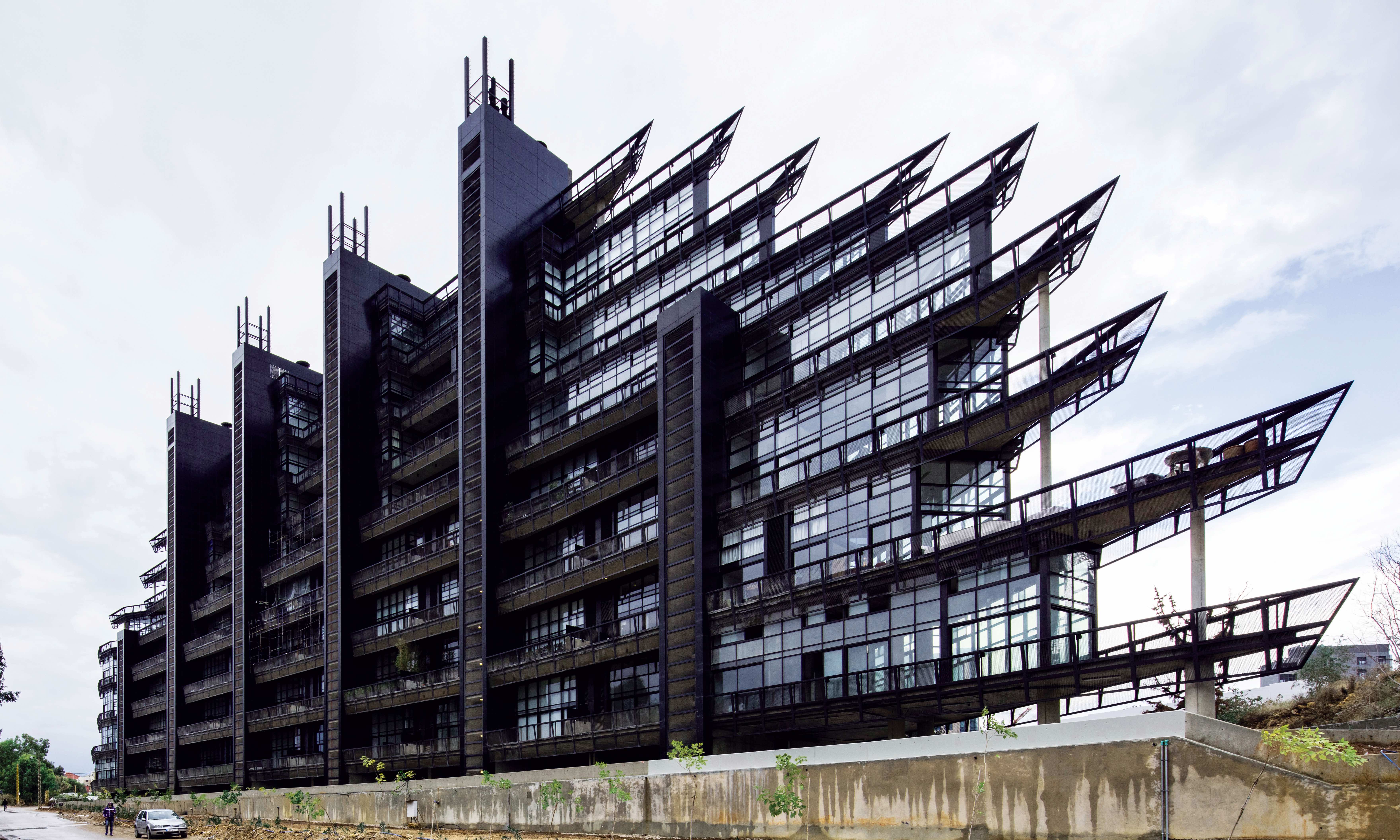 Back to the present day and inside Khoury’s architectural headquarters, set in a former industrial metal warehouse, we ask him about those first few buildings (mostly entertainment venues), which did so much to establish him as a free thinker. “It was very strange for an architect but the first six buildings I built had expiration dates written in their contracts. It’s like a woman who is pregnant and you tell her that her baby is going to die on a certain date,” he explains, in his deep, raspy voice. It’s remarkable then, and a testament to Khoury’s talent, that exactly twenty years on, B018 remains just as popular a hotspot, despite the ephemeral nature of the nightclub industry and its own nonpermanent design. 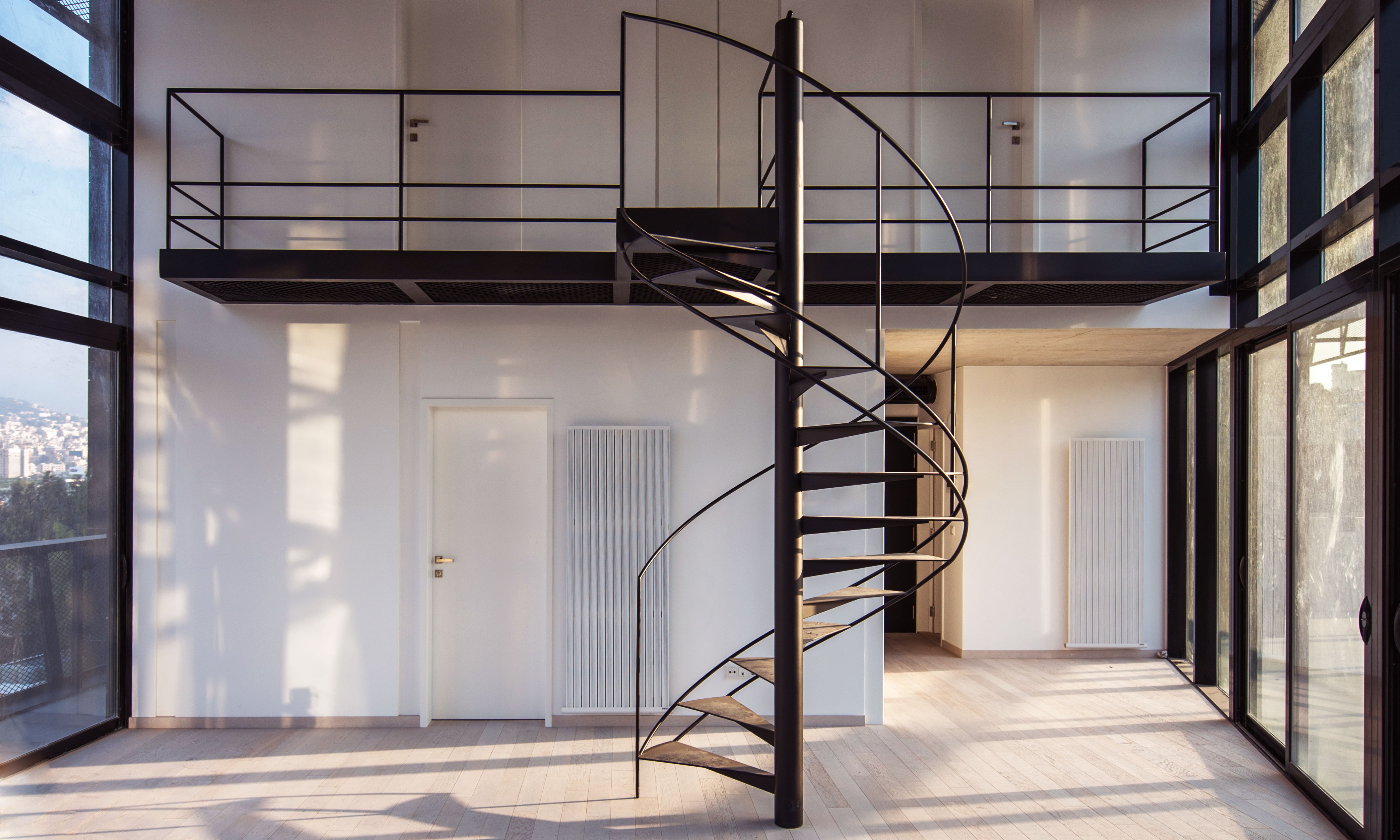 Khoury admits it took a while to shake off his title of architect par excellence of debauchery spaces. “I was effectively banned from residential projects because I was labelled as a dangerous architect,” he says, before setting his gaze on his matte-black, customised Renault Tweezy, a tiny electrical car he rides up the elevator and parks right in the middle of his office. (This parking arrangement is a concept that’ll be rolled out in an upcoming residential project, encompassing special elevators that will lift one car into each of the 40 open space studios). As it turns out, Khoury’s unique perspective works well no matter the purpose of the structure, as his firm’s wide-ranging portfolio attests.

If Khoury had his own movement it might be Catastrophic, Sarcastic, or perhaps even Masochistic architecture.

Indeed his firm, DW5, is behind some of the region’s most recognisable residential towers, banks, hotels and educational centres (including the Tumo Centre For Creative Technologies in Armenia, which has garnered international acclaim and resulted in further demand). And though Khoury is adamant about creating unique, site-specific constructions that are finely attuned to the space they exist in and the purpose they serve, you could probably take any DW5 project and know Khoury is behind it. 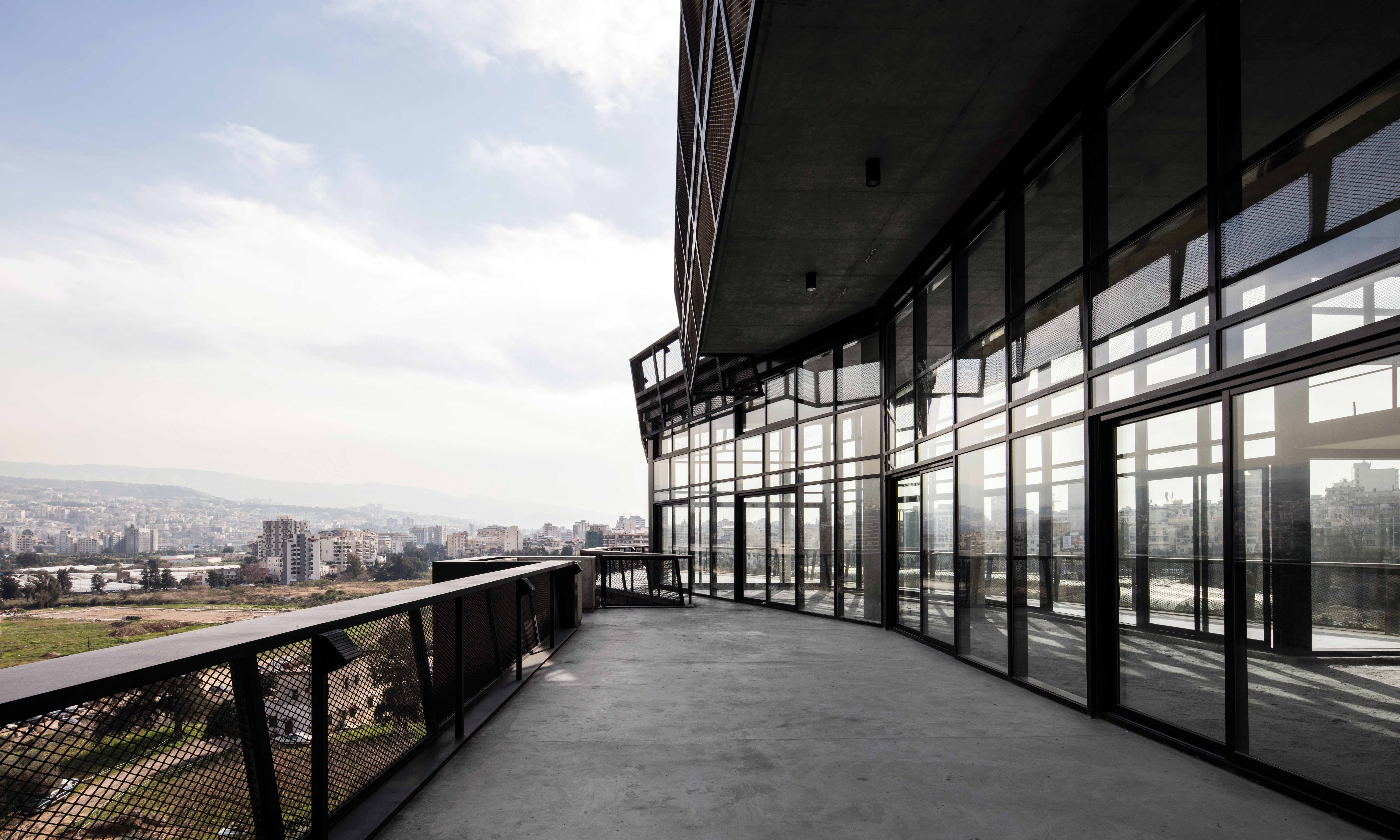 Take for instance Plot #1282, a residential building on the northern periphery of Beirut completed last year. At first glance, the glass and steel structure is somewhat reminiscent of some kind of apocalyptic ship. “It is shaped literally like the shape of the site, minus a 4.5-metre setback at the ground floor and a gradual offset as we go upwards to 50 metres, which is the maximum allowed height,” Khoury explains. The approach – to utilise the entire space but with an ulterior motive – is rather compelling.  “It didn’t take us long to realise that there was a serious problem with this plot, because out of its 400-metre perimeter, only six intersect with the public domain. That means that on the other 394 metres, you could potentially have new construction that comes up,” Khoury recalls. In other words, his building could eventually be surrounded by walls, on all sides.

In a place like Lebanon, where life and death are routinely taken to extremes, Bernard Khoury continues to source light from darkness.

“So the typical approach, which any wise architect would have taken, would have been to retract at one end of the long plot, to provide our own oxygen and breathing space, since the state did not provide it for us, like many other things in this territory. But this would have entailed a building that turns its back on two or three orientations and says ‘fuck all of you’,” he exclaims. So, instead Khoury circumvented the problem with an olive branch of sorts. “I built all the way to the limit of the perimeter, abiding by the minimum setback which is 4.5 metres at ground level. I’ve taken it to an extreme, with glazing all around 360 degrees in such a way that I don’t turn my back to my potential future neighbours,” Khoury muses. “I’ve taken what I call a suicidal, masochistic approach.” 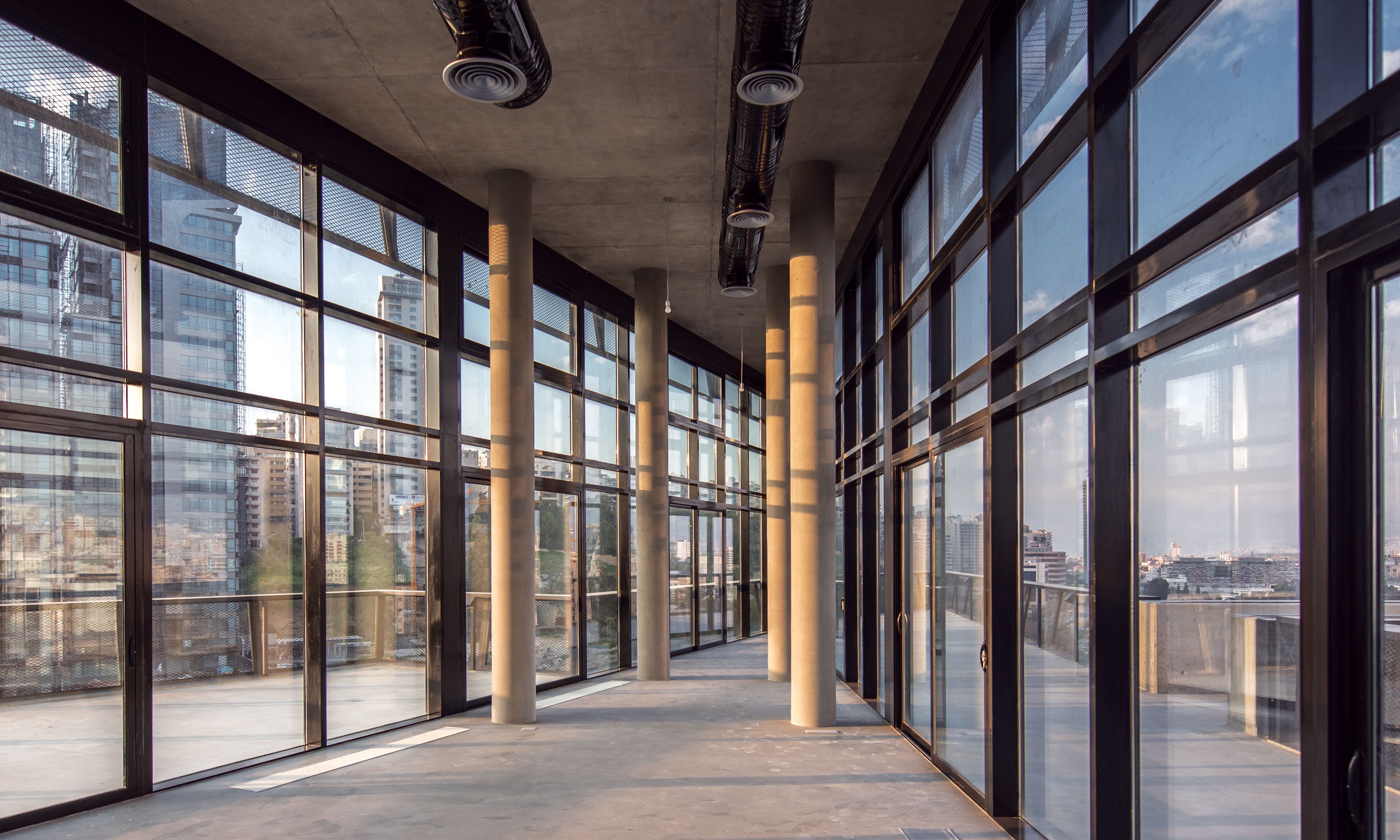 Comprising 95 industrial lofts, ranging in size from 100 to 650 square metres, the building stands like a beacon of modernity in an area that hosts an abandoned railway terminal, military barracks, leftover agricultural land and a 30-metre wide highway. Yet, despite the less than stellar views, Khoury has designed balconies with railings that serve as a bar one can lean on, looking out, betting against the odds that one day the building’s residents will sip their Turkish coffee here, while chatting with a friendly neighbour.  It’s the kind of irony that can only have been born in a place like Lebanon, where life and death are routinely taken to extremes, and where Bernard Khoury continues to source light from darkness.