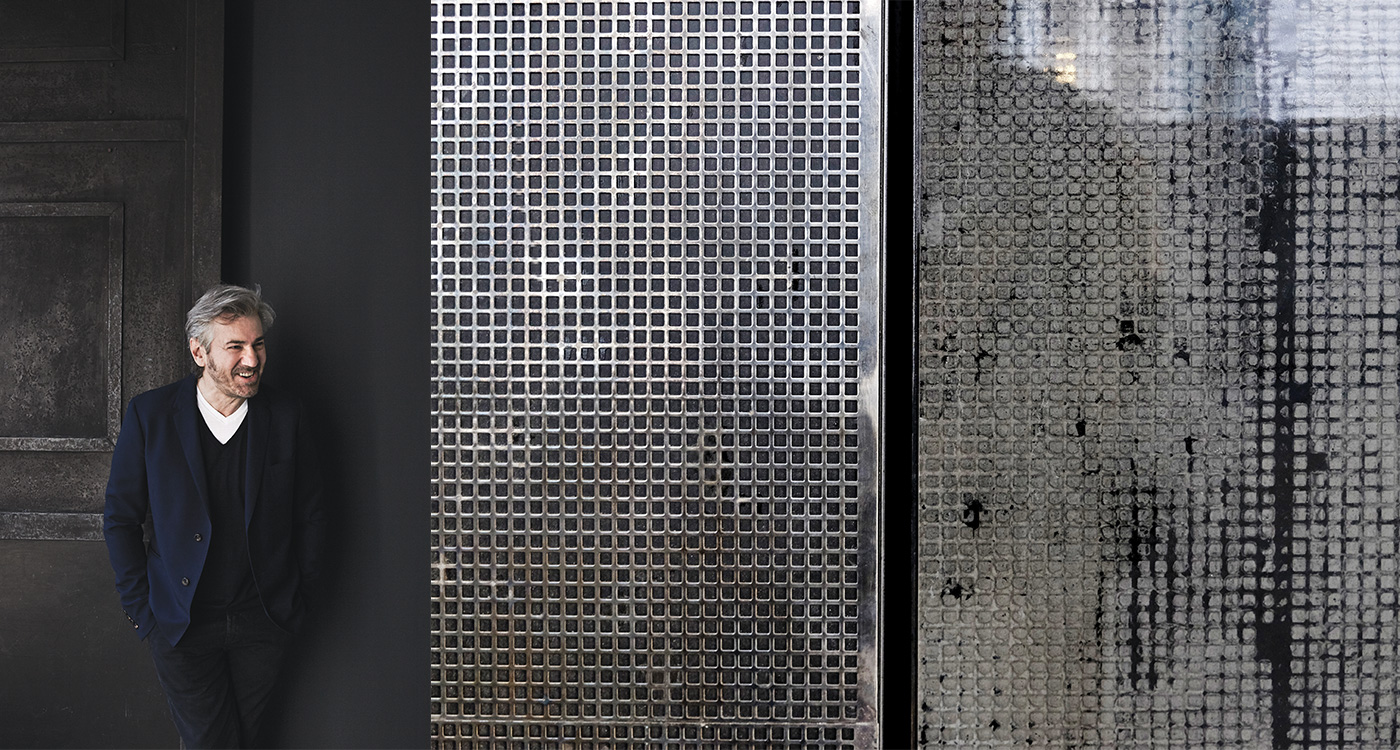 A pioneer of the international design scene, Vincenzo De Cotiis is passionate about all artistic forms. “I make no distinction and I believe that the three areas – architecture, interior design and art – are animated by the same energies,” he explains. 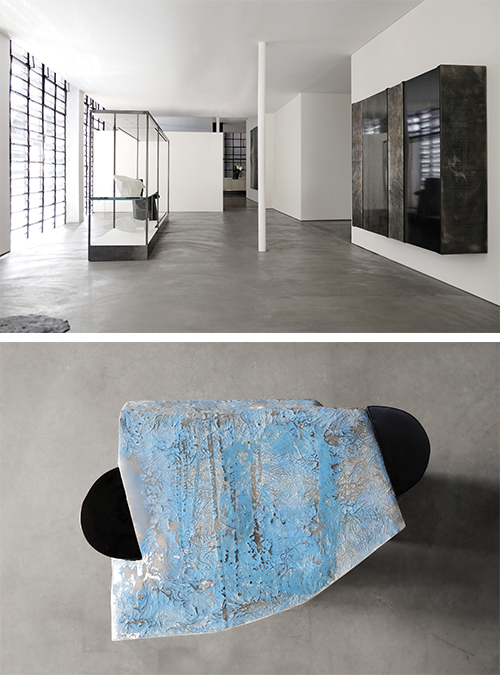 TOP: A DC1413 cabinet on the wall of the Vincenzo De Cotiis Gallery in Milan. BOTTOM: The DC2005 side table in handpainted recycled fibreglass and ebony, limited to 20 pieces and four artist’s proofs.

Whatever De Cotiis works on, from designing residential and commercial spaces, furniture pieces, to artworks, there is a common denominator that defines his bold unique style. He manages to merge the vulnerable antiquity of something from the past with a fresh contemporary minimalism. His keen interest in the passage of time and historical memory is evident in his work that combines luxurious materials with unexpected textured details.

Recycled fiberglass and wood, materials he feels that are important to preserve and renew, are often featured in his works, along with rare cast metals, glass and marble. His mastery lies in merging these elements together and making it seem as though one material has morphed into another, with recycled materials easily sitting alongside more ‘rich’ materials. For example, he likes to merge fibreglass, which can be coloured, painted and modelled, with marble, creating interesting associations. He explains there are no rules when he designs a product. “Every gesture is an artistic gesture if dictated by a free expression. In my case, the expression is the result of sedimentation, sometimes very long, intellectual and instinctive. I am infinitely interested in a piece or idea that can become more. I do not deal with product design in the shared sense of the term.”

Such an eclectic mix of materials is also seen in the work of Italian masters Carlo Scarpa, Gio Ponti and Joe Colombo, who all have inspired De Cotiis. The decades spanning 1930 to 1980 is also when he felt there was artistic output associated with great experimentation and an earnest quest for quality. He laments that today things are not nearly as genuine as the past. “I see many beautiful but superficial things, continuous reinterpretations and copies of other things. In my own way I try to perpetuate something that has been lost, suiting it to the future.”

The elegant raw quality of his work evokes a Japanese Zen aesthetic which he reveals he’s also drawn to. His body of work, Eternel, revives traditional Japanese aesthetics in contemporary forms, using iridescent glass and metals, mixed with stone as a medium. In his current collection, Crossing Over, De Cotiis explores building contemporary urban imagery, where the city becomes the place of contamination and culture of displacement. It resembles the work of an ethnologist who, through the study of cultures, traces and combines all the differences and similarities within a given period. Anthropologist Marc Augé summarises this collection as such: “It is a pure time, undatable, absent from our world of images, simulacra and reconstructions. It is a time to give birth to new symbols and new icons.”

In Crossing Over, there are tables structured by stilts that encompass the East to La Serenissima, wall paintings that reflect the many contradictions of the city, seats sculpted like African thrones and containers like anthropomorphic urns. “This is a journey,” explains the 63-year-old master. “An exploration in search of places, places I have seen and spaces that exist in my imagination. I have pursued cultures in search of symbols and iconographies that could overlap with mine.” 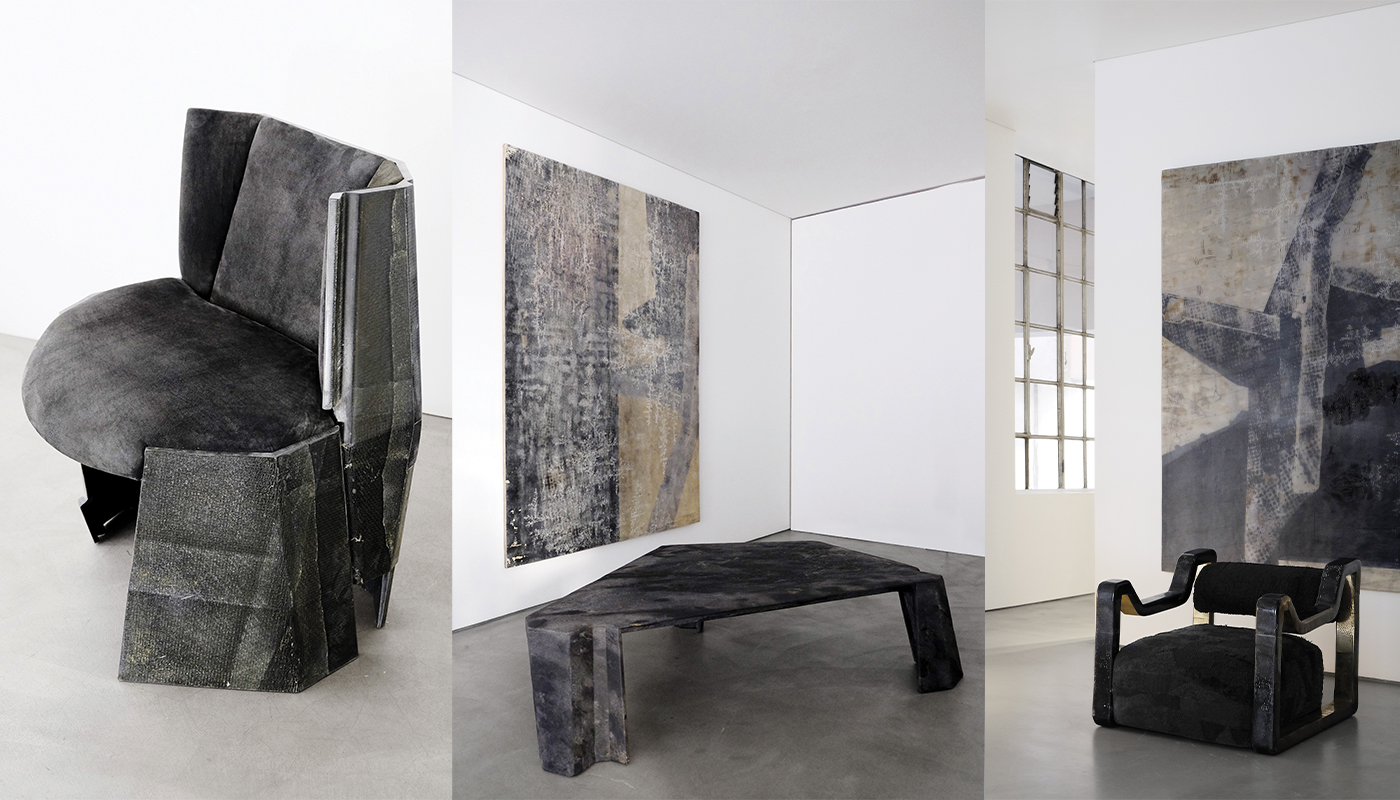 Born in 1958 in Gonzaga Italy, De Cotiis studied architecture at the Politechnico di Milan and, after starting out, he initially made a name for himself for transforming raw industrial spaces into stylish hotels and luxury retail stores. While he continues to design residential and commercial spaces, he also began designing his own collection of furniture and art collectibles, which, in the age of social media has been lighting up Instagram. He explains that when he first started showing his own work of conceptual experimentation, he would do so in places outside of conventional circuits. “These were works with very high artistic content, which perhaps were not even fully understood at the time. My work related to collectible design is the place where the functional aspect can really be put aside, to make a wider and more transversal interpretation of the object prevail.”

Not one to give up when faced with an unprecedented challenge, De Cotiis sees the global pandemic crisis as a catalyst for change that could be for the better. “The current situation forces us to rethink what is happening in the world today along with the rest of the world,” he says. “It’s a good occurrence; reflection that makes us grow up. The future is uncertain, but it is the deliberations and the debate leading to actions that, in turn, can contribute to good change. To act you need to rethink.”

In addition to his current collection, Crossing Over, which runs until June 3rd at the Vincenzo De Cotiis Gallery in Milan (which is around the corner from Corso Como 10), Carpenters Workshop Gallery will present his Eternel collection in New York from May 3rd to September 15th. De Cotiis is also currently working on his next solo collection which will be presented in Miami in December 2021.