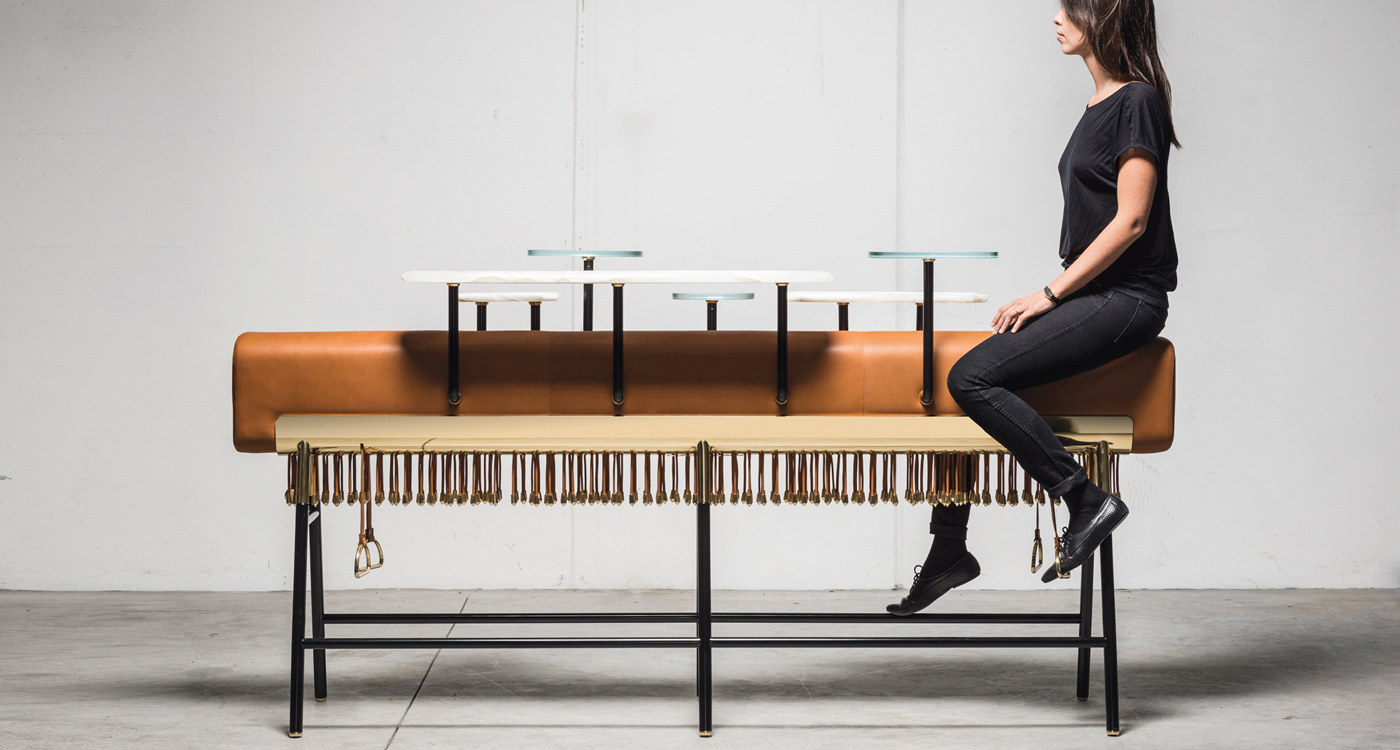 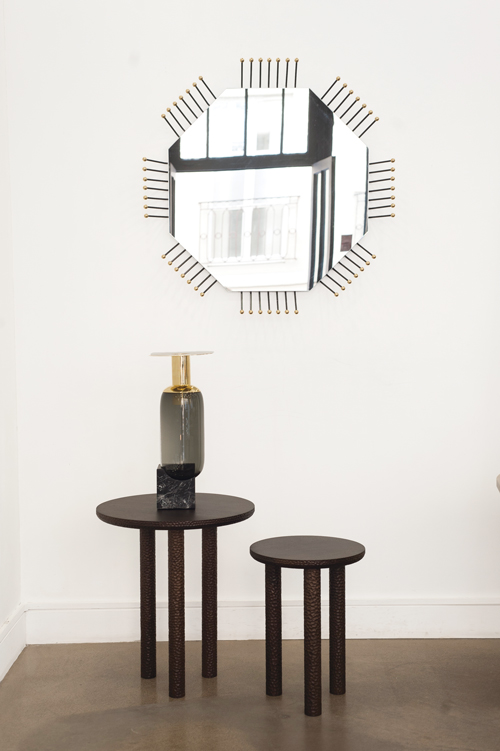 ‘Motherboard’ is a series of mirrors that were designed for Collection Particulière during the Paris Design Week, in early September.

Emerging from the sparkle and chaos of Beirut is a new generation of prodigious creative design talents, and Nicolas Moussallem and David Raffoul are two striking examples. As the founding partners of a popular retro-futuristic furniture brand, their star is rising.

The Lebanese design duo, Nicolas Moussallem and David Raffoul, who have been getting a lot of international recognition over the past few years, are lively and entertaining company but our discussion leads to few continuous trains of thought. The two share the easy back-and-forth banter that comes with a long-established friendship, abound with inside jokes and occasional bouts of bickering. So, as we talk, they interrupt each other almost incessantly to agree or elaborate, contradict or corroborate.

Given that they’re taking on ever more creative projects for established international design companies, I ask how this work differs from creating one-off custom-made pieces for private clients.

“It’s mass-produced, so cost is very important,” says Moussallem. “An extra dollar spent on production can affect a retail price by as much as 20 USD.”

“It’s harder than anything else,” interjects Raffoul.

“The process requires analysing the company,” Raffoul jumps back in, “understanding who that company designs for.”

“They’re usually strict,” Moussallem adds, “because they have to invest a lot of money.”

Their toing and froing is born of years of collaboration. Moussallem and Raffoul studied interior architecture together at the Lebanese Academy of Fine Arts, before moving to Milan, where they both completed Masters degrees at the Scuola Politecnica Di Design. Separate internships in Italy, Lebanon and Japan helped them to develop their individual but complementary approaches to design before they set up their own studio in 2011, under the name david/nicolas. 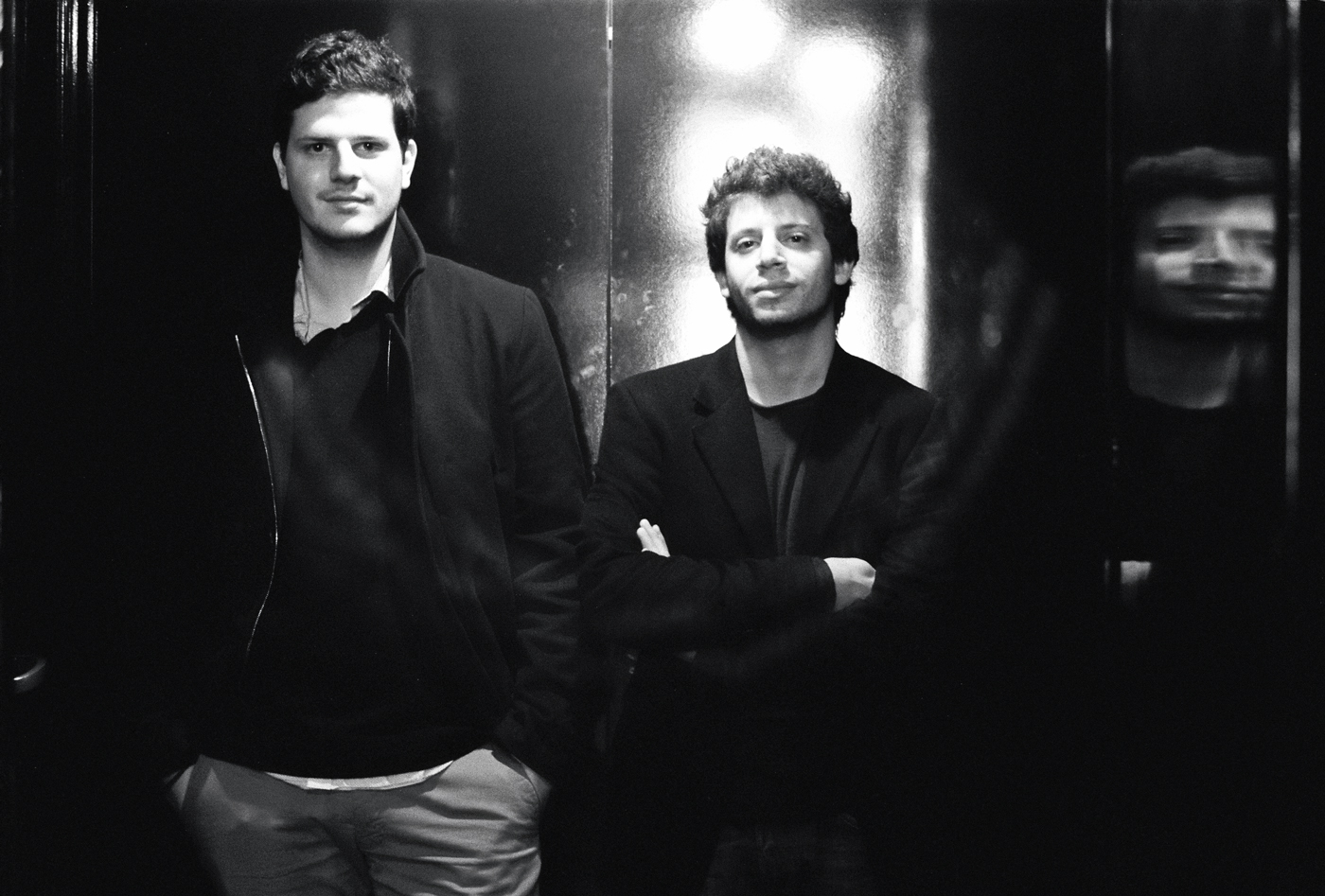 Four years on, their diverse collections and bespoke creations suggest a swiftly evolving approach to design as well as an openness to new materials and styles.

“We get bored really fast, so we’re always looking to do something new,” explains Raffoul. Yet something in their designs – whether it’s porcelain tableware, a bespoke bar or a sleek leather sofa – ensures that their work retains a cohesive identity, a consistent visual language.

“It’s about the feeling between you and the piece,” says Raffoul.

“There’s constant development,” adds Moussallem. “People say they can tell something’s by us from a mile away but we don’t see it. We’re probably too close to it.”

One hallmark of a david/nicolas piece is the way it’ll mix different time periods. They call it retro-futurism – a combination of luxury, richness and quality of antique furniture built to last a lifetime with avant-garde elements that wouldn’t be out of place in a sci-fi film. Deceptively simple lines give their work a sleek, even minimalist, feel, belied on closer inspection by the attention that the duo lavishes on each tiny detail, down to the last screw. Although their designs ultimately serve a function, aesthetics are never left to play second fiddle to practicality. The result of this approach is pieces that are almost impossible to date: they could as easily have been created decades ago, or transported back to us from the year 2050 through some magical furniture wormhole.

Their most recent edition for an international furniture brand is a case in point. ‘Motherboard’ is a series of mirrors designed for the French company Collection Particulière and launched during Paris Design Week in September. Inspired by the complex printed circuit boards found in computers, the simple, elegant mirrors come in three shapes – triangular, circular or hexagonal – and are fringed with metal rods tipped with spherical balls, reminiscent of complex wiring and blobs of solder. These metal spokes begin at the back of the mirror and extend forwards, never touching the surface but protecting it from damage like a traditional frame. Here, function and aesthetics combine in typical retro-futuristic manner.

Presented during last year’s Milan Design Week, the Paume collection reflects the concept of comfort, with pieces designed as discreet objects that have the ability to blend in, whilst remaining elegant, detailed and timeless.

“When you’re looking at yourself you’ll have this frame around you, so it’s kind of transforming the human into a cyborg,” says Moussallem. “There is this idea of the future that’s digital and about robots – there is something there that really gets us going – and there is also the past. It’s what is between the two that is really interesting.”

If ‘Motherboard’ is designed with mass production in mind, on the other end of the spectrum are pieces like ‘Bar Michele’, a one-off creation designed for private clients in Lebanon. Inspired by a gymnastic beam, the bar is made up of a long, leather-clad bench supported by a simple black metal frame. Polished brass stirrups hang from either end, inviting the clients to climb up and straddle it, facing each other across six eclectically-shaped table tops made of glass and Iranian white Onyx marble. From beneath the central beam, 150 handmade solid brass points hang from leather strips, providing a rich decorative element to a piece that’s also highly tactile. 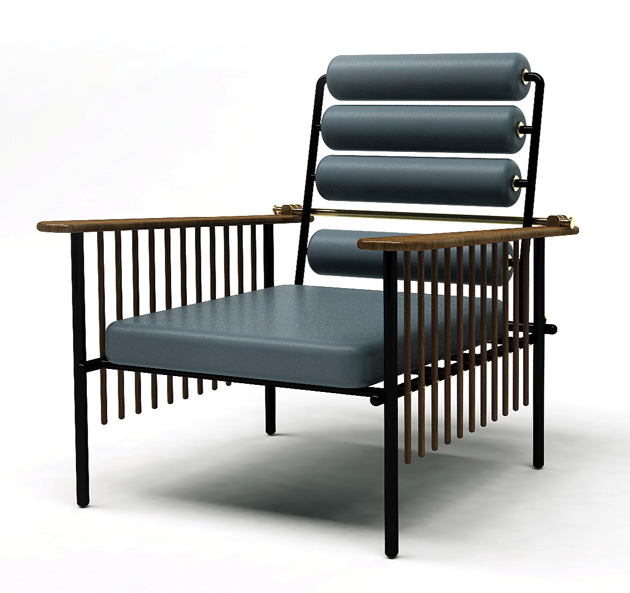 The Chaise Maurice is a re-imagined vintage chair that was designed for Nilufar Gallery, in either leather or cavallino, with black painted steel, brass detailing and American walnut armrests.

“Bar Michele was a real collaboration with the client,” Raffoul recalls. “At first, they wanted to hang the bar from the ceiling.”

“Actually it contrasted a great deal between the husband and the wife,” Moussallem adds. “One wanted something very sleek, clean and elegant, and the other wanted something more eccentric. The collaboration was very nice and we were able to connect with them, because the first design we proposed was the one we produced.”

“We thought that we should either make it very sleek and chic, or we make it super crazy,” says Raffoul. “Like the small brass points hanging from the leather strips – it’s about feeling. You can enjoy a drink and just touch them.”

The two have to work very closely together to come up with a shared vision. “Imagine we’re sketching,” says Moussallem. “One does a line, the other adds a line and then we talk about it and it just builds up. Slowly the sketch starts changing, and eventually we start again and do a new, clean sketch.”

In between the one-off pieces and the designs for mass production are some limited edition series like the two collections david/nicolas produced for the Milan design gallery Nilufar. Their most recent, ‘Paume,’ which was shown at this year’s Milan Design Week, includes a piece called ‘Chaise Maurice,’ based on the iconic reclining William Morris armchair design. Seeing as the once-popular chair is rather out of favour and widely seen as old-fashioned, the duo decided to reinvent it for the contemporary home, using black painted steel, American walnut wood, brass and stylish shade of leather. Vertical rods descend from the arms to below the base of the chair, complementing the horizontal leather rollers that form the chair’s back. Tiny accents in brass give the chair a feeling of richness without being too flashy. The sofa, stool and bench that make up the rest of the collection are more contemporary in form but share the same balance of richness and simplicity in their use of materials.

This design house is certainly unconventional, but the genius of david/nicolas retro-futuristic pieces is that their very eccentricity allows them to fit in with almost any surroundings. With several planned collaborations with internationally recognised brands still under wraps and a new studio space set to open in trendy Mar Mikhael before the end of the year, Moussallem and Raffoul seem likely to continue their meteoric ascent.