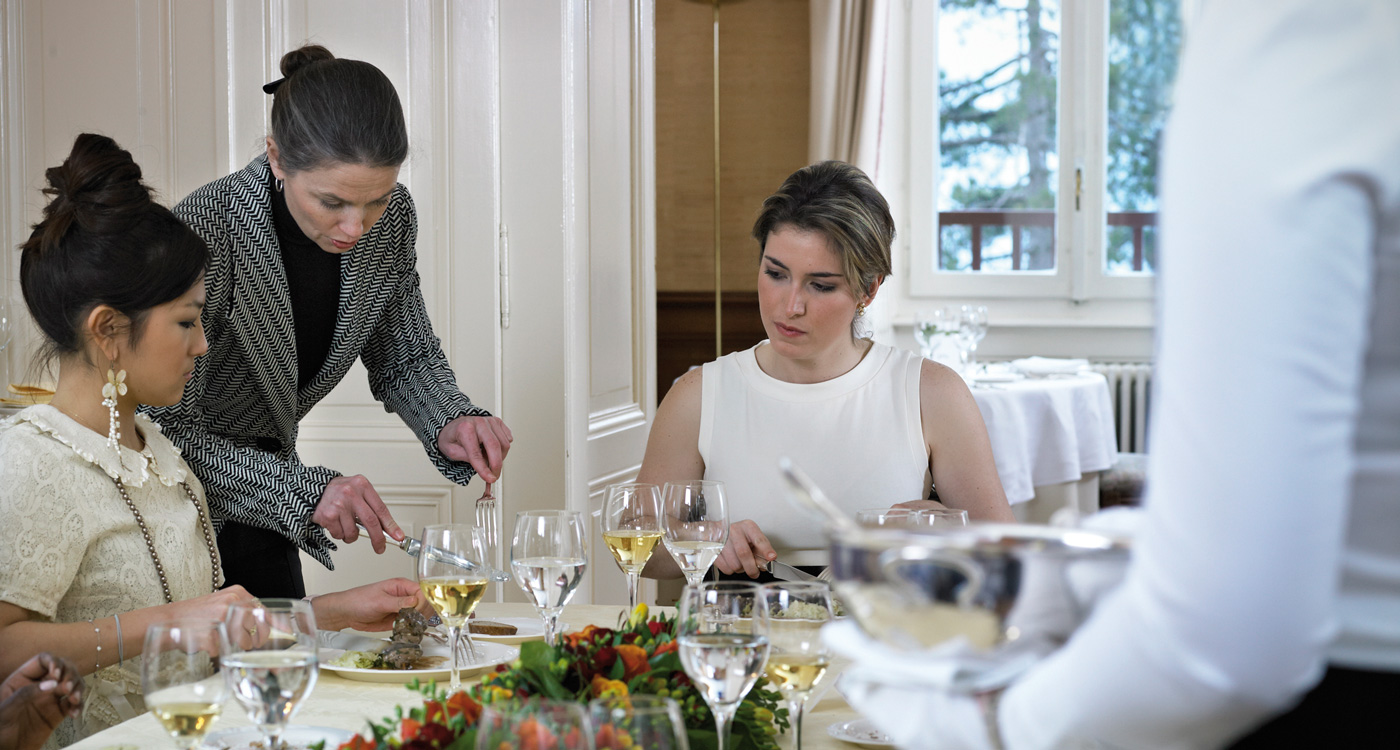 It's About Time We All Learnt A Thing or Two from Switzerland's Last Remaining Finishing School
April 27, 2012 Nadine Khalil

Once upon a time, the world’s wealthy sent their daughters to Swiss finishing schools but by the 1960s, gender equality, women’s liberation and an emphasis on higher education for all prompted a decline. Nowadays only Villa Pierrefeu remains.

It’s not about balancing a book on your head, how to hold a teacup, how to sit, cross your legs or behave. The finishing schools of today are nothing like the regimental boarding schools of the past. No longer the training ground for future colonisers – or Madame Colonisers – they now appeal to any woman, housewife or diplomat, whether she wants to avoid intercultural faux pas when travelling or be the hostess with the mostest.

Outside Europe (where Switzerland is a particular bastion of these institutions) most finishing schools merely enable young women to complete their education with specialised, if relatively menial skills like sewing, typing or public speaking. The Good Shepherd Finishing School in India, for instance, claims to make “accomplished ladies out of girls” , ladies who can then “conquer the world” and offers courses in ‘good housekeeping,’ ‘dining etiquette,’ and ‘personality development.’

In the days when few women were finishing their education at university, finishing schools were designed to put the final polish on a young girl’s education to make her more marriageable. Even after empires ended, the tradition continued into modern times. Princess Diana attended the famous Swiss Institut Alpin Videmanette and the first Lebanese woman to become member of Parliament, Myrna Bustani (daughter of Emile) attended the Club of the Three Wise Monkeys, London’s (then) most fashionable finishing school.

Even today, learning to sew, host tea parties, perfect floral arrangements and table manners, is still relatively popular. Which brings us neatly to the Institut Villa Pierrefeu (IVP). The last existing traditional finishing school in Switzerland, it was founded in 1954 by Mrs. Dorette Faillettaz. Housed in a hilly property overlooking Lake Geneva, the Institute remains a family business, headed since 1972 by Dorette’s daughter Viviane Néri, whose son Philippe, also assists on a part-time basis.

Looking nothing like a school, Pierrefeu is supposed to resemble the kind of house graduates will one day inhabit. With a marble staircase, grand chandeliers and a kitchen full of servants, whose roles students learn to play during Institute workshops, Pierrefeu demands a unique set of hosting skills.

Specialising in international etiquette and protocol, IVP attracts students from all over. Originally, most were European but as travel became more commonplace and cheaper in the 1970s, the Institute began to receive requests from Japan, India and the Philippines.  As a result, they now run courses such as “international savoir-faire”, which permit students to familiarise themselves with social and business customs of countries around the world.

With a smile, Néri tells me that her first students from the Middle East were from Lebanon. Not one to name names, she admits she’s had students from all the royal families and some Arab heads of state, many of whom knew very little about their own customs “having been brought up by foreign nannies”.

The irony that Gulf princesses could learn more about their own country in a finishing school in Switzerland, specialised in European etiquette, is not lost on either of us. Still, the emphasis is on becoming ‘international’. All cultures have equal place and the Institute’s teachers are all extremely well travelled.

“We have meals where we eat with our hands and others where we eat with chopsticks,” Néri continues, emphasising that the diversity of the student body extends beyond national origin. “Our students are businesswomen, doctors, professionals and from farming families as well.”

The Institute’s only requirement is that applicants are female, at least 18 years old and (naturally) able to pay the tuition fee, which amounts to 20,000 USD for the six-week residential diploma. Taking no more than 36 students at a time, Néri and her fellow teachers guide them through a curriculum that’s as much practical as it is theoretical and which totals 216 hours of coursework.

For the Higher Certificate, half the course is devoted to French classes, but English is the school’s lingua franca. Emphasising the fact that what students learn here they do not learn elsewhere, the IVP has its own course books.

Still, it’s a dying profession. Once one of hundreds of Swiss finishing schools, Villa Pierrefeu now stands alone.  Most were shut down in the 1980s, for reasons Néri says of succession, “there being no one in the second or third generation to take over,” or not having a viable business plan, especially once “lakeside properties presented valuable real estate opportunities.”

The only other establishment to offer a thorough ‘Finishing School’ program until a generation ago was Lausanne’s Villa Brillantmont. In the 1970s though, it began to focus more on its high school program, as did many others most notably Néri says, like Chateau Mont-Choisi, one of the earliest and most famous finishing schools in Switzerland. Outside Switzerland, matters were worse. Most so-called finishing schools were only training courses, “like Lucy Clayton in London,” she adds, lamenting the proliferation of crash course finishing schools in the United States and now in the U.K. as well.

There are actually two main types of finishing schools,  “the English type, where students learn everything and nothing, like typing and cooking” and the Germanic type, upon which the Swiss model is based, which was meant to teach you “how to run a household, how to receive guests, even while you were working”, teaching skills like household management and table service.

“There is this misconception that we are charm schools,” says Néri with a no-nonsense attitude that seems intended to demonstrate that her school is as much about business and managing international relations.

Villa Pierrefeu has changed and evolved with the times, though. Sewing for example has been optional since the 1980s – it was previously a core course – and a greater emphasis is placed on language-learning as well.

And before I can suggest that in that case, why would anyone need to send their daughter to Switzerland these days, Néri adds that the greatest teachers have been Swiss. “The Swiss taught the Russian czars,” she says feistily. “Who can forget Jean-Jacques Rousseau or Jean Piaget? We weren’t like the British or the French, colonisers who wanted to impose their vision on everything.”

Goodness. If Swiss neutrality informs national conduct and politics, it clearly doesn’t mean ‘opinion-less’. But then I imagine that any properly finished young lady could have told me as much.

An Ode to Tripoli As It Was: When There Was Romance and Beauty in the Libyan Country Life