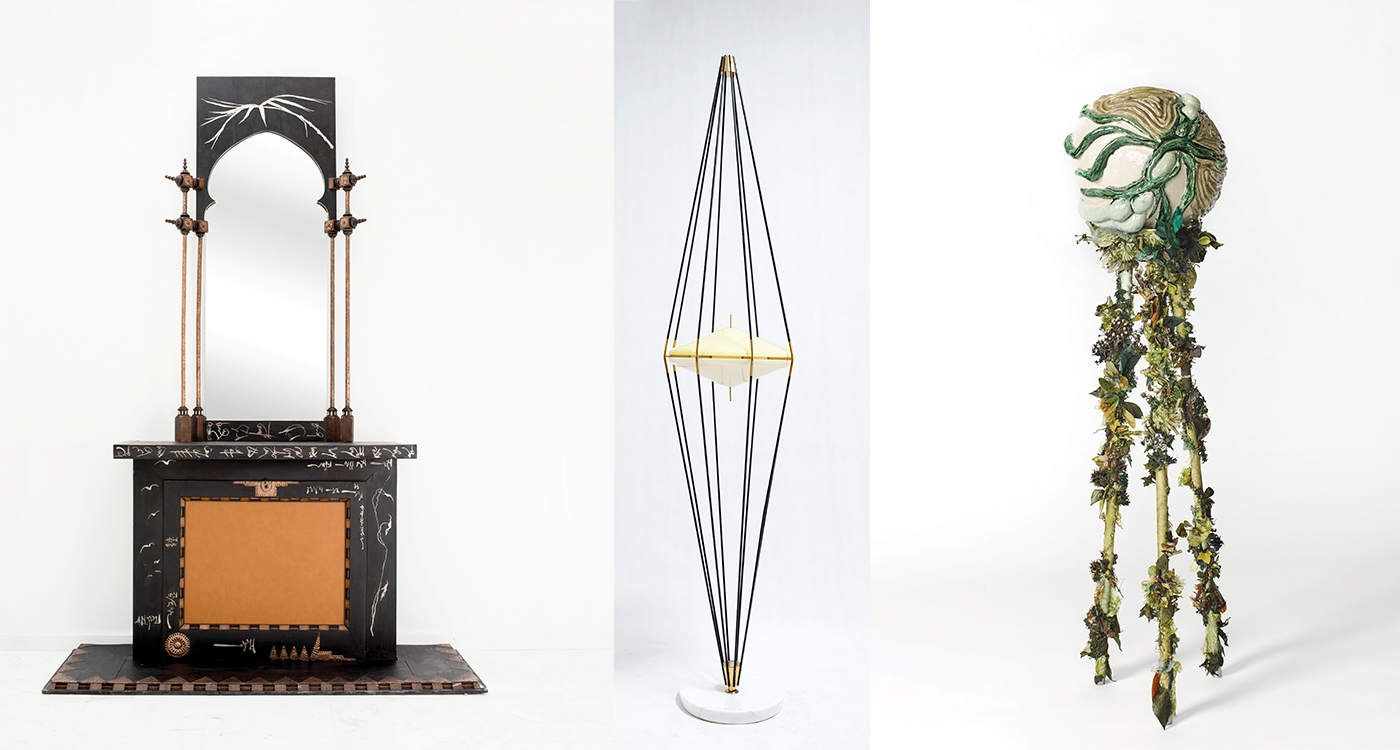 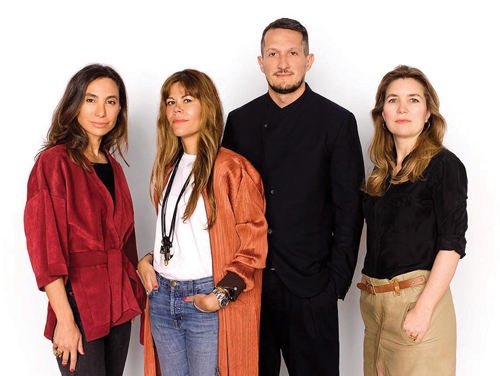 Gabriel & Guillaume is headed to Manhattan. The travelling collectible design gallery, helmed by a Lebanese and French duo – Nancy Gabriel and Guillaume Excoffier – has made an international name for itself since it first launched in 2013, by creating pop-up, ephemeral spaces in which magnificently distinctive furniture pieces are set up as they would be inside a tasteful home.

But, in a major milestone, Gabriel & Guillaume is going to take part in the prestigious Salon Art + Design, which runs from November 14th to 18th at the Park Avenue Armory in New York. “This is our first fair,” says Gabriel, “and it’s also the first time that Salon Art + Design has a pop-up gallery.” Among the 40-something galleries selected for the fair, Gabriel & Guillaume stands out in many ways. “We don’t fit many of their criteria,” says Gabriel. “We don’t have a permanent space, we’re less than 10 years old and we have a different thematic than the classical ones. It’s the first time they accept a profile like ours, and we’re the first gallery accepted from the Middle East.” Excoffier adds that the maturity of the American market is a boon for the gallery. “Americans have spending power and education,” he says, “and they have the tastemakers as well.”

What sets Gabriel & Guillaume apart is the ability of the two founders to identify exquisite pieces that may be missed by less discerning eyes. Focusing on objects that range from the early 20th century up to the present day, the travelling gallery has in the past showcased rare, almost impossible-to-find pieces by the likes of Jean Royère, Gio Ponti, Max Ingrand, Oscar Niemeyer, George Nakashima and Zaha Hadid. 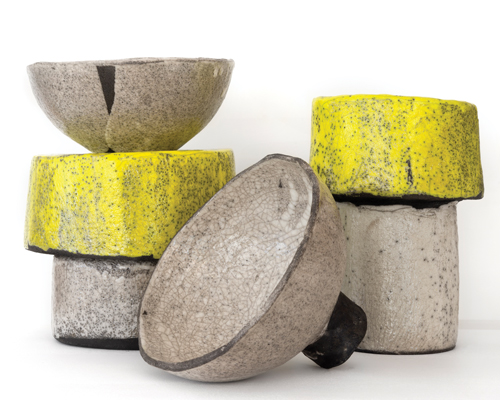 In a departure for their practice, Gabriel & Guillaume have commissioned works for Salon Art + Design from some of Lebanon’s best designers to create limited edition contemporary pieces that combine traditional craftsmanship with ultra-modern design flair. There are new pieces created by husband-and-wife team Ranya Sarakbi and Niko Koronis, including a bench, a daybed and a pair of bronze side tables. “She brings her artsy, sculptural side, while he brings functional proportions and design,” says Gabriel. There’s also a hand-hammered coffee table produced in Italy. “We depend on the way the stone is going to react to the hammering,” says Gabriel. “The material dictates the process.”

Another piece, a massive chandelier that’s covered with paper and is inspired by the paperwork at Beirut’s Mayha restaurant, comes courtesy of industrial designer Karim Chaya and architect Michèle Maria. Also for Gabriel & Guillaume and through her Namika Atelier, Hala Matta has created handmade ceramic accessories, while designer Georges Mohasseb has crafted a standing 3D shelf made of ktit that’s both sculptural and functional. “Ktit looks like straw,” says Gabriel, “but when you dip it into plaster and it dries, it becomes an extremely strong structure. You can even build houses with it.”

The vintage pieces that have become Gabriel & Guillaume’s speciality will, of course, be on show, including a fireplace by Carlo Bugatti, a Gio Ponti library, a sideboard by Joaquim Tenreiro and a José Zanine Caldas table. These and other coveted pieces, mainly from Europe and Brazil, will be displayed alongside the brand-new items created by Lebanese designers.
In parallel with Salon Art + Design, Gabriel & Guillaume will stage their famous mise-en-scène inside a 200-square-metre apartment in New York’s Tribeca. “This is much bigger than the 28-square-metre booth at Salon Art + Design, so you get to see even more pieces,” says Gabriel. Opening night at the Tribeca apartment will be hosted by Carlos Mota, former international style editor at Architectural Digest, and the exhibit will run until the end of this year.

Prior to the two New York shows, Gabriel & Guillaume can be spotted in Paris, staging the first solo exhibition by Spanish artist Maloles Antignac. Curated by Marion Vinal and titled ‘Fertility Cycle’, the show features between 15 and 20 of Antignac’s pieces. “Her work is inspired by Colombia’s Kogi tribe,” says Excoffier. “They’re contemporary sculptures made with ceramic, stone and embroidery, in all sizes.” Highlights include Ori, a complex, expressive piece made of enamelled clay, and ‘Eau de Mars’, created with raw sandstone, sunghite carbon mineral pigment and pyrite. Rich with the urge to connect with Mother Earth, Antignac’s pieces exude a wild, beautiful femininity. ‘Fertility Cycle’ runs from October 15th to 20th at 35 Avenue Matignon, concurrently with Paris’ FIAC contemporary art fair.

Reflecting on hers and Excoffier’s journey since the first Gabriel & Guillaume show in 2013 – which was held at The Gathering in Beirut – Gabriel maintains that the most arduous task remains the search for collectible design. “It’s a challenge for galleries to hold unique pieces,” she says. “We find them through our network and connections. Searching for the pieces is even more important than selling them. But how we find them remains our little secret.” 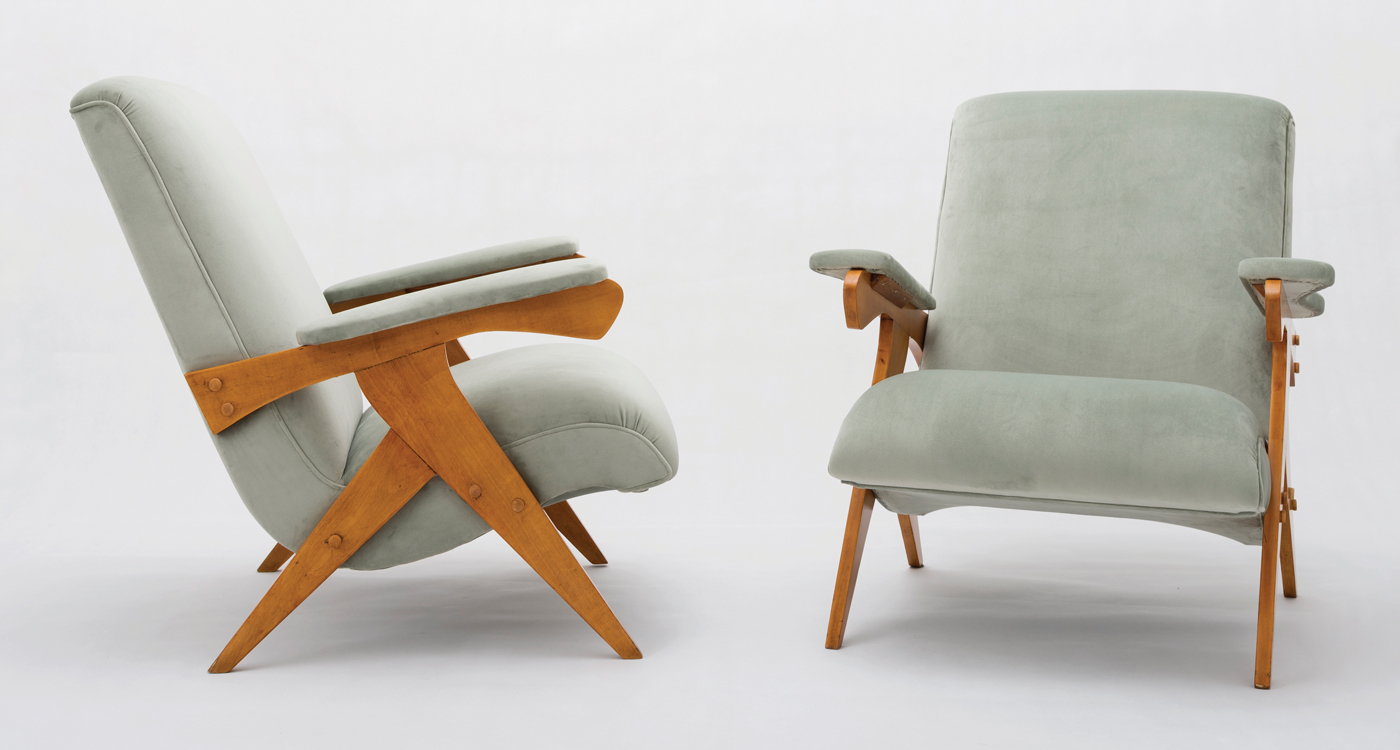 An armchair, one of a pair, by Brazilian designer Jose Zanine Caldas from circa 1950.