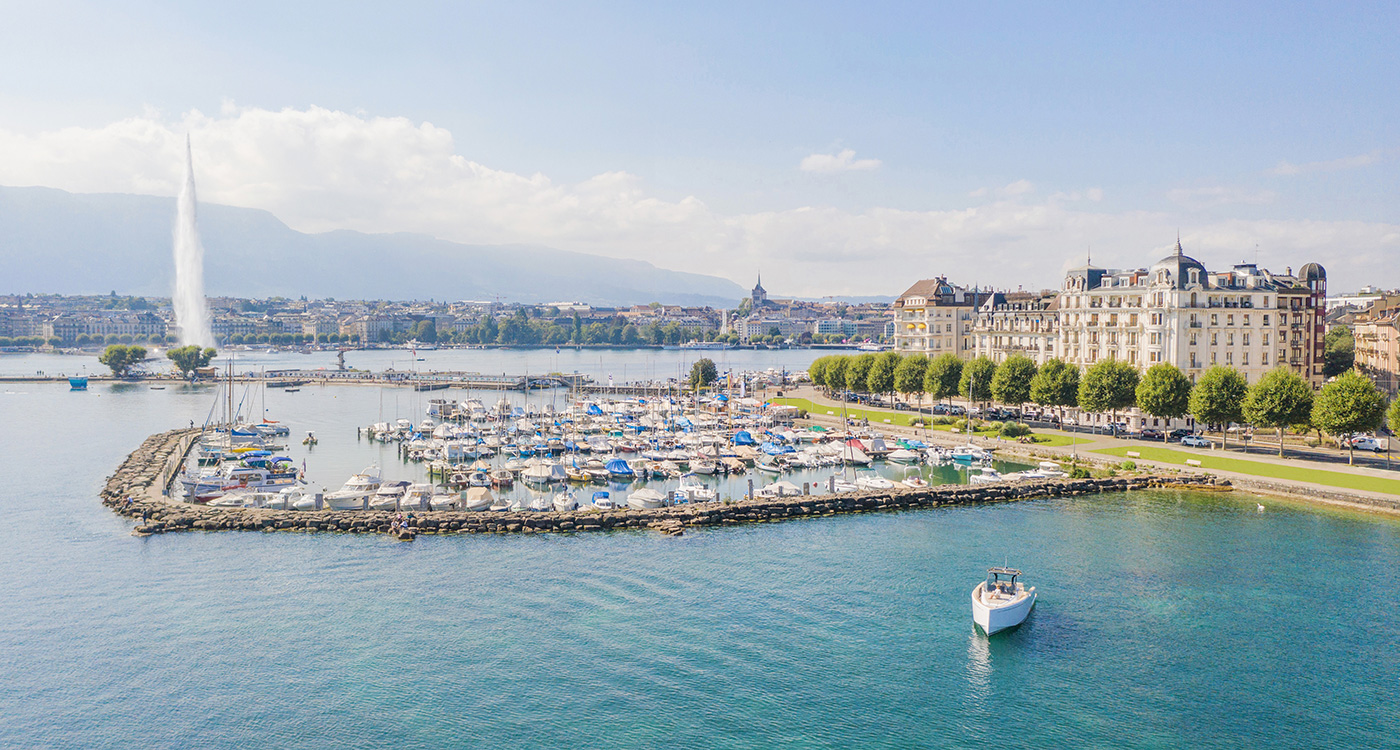 Oscar Wilde once said, “I’m a man of simple tastes. I’m always satisfied with the best.” And, after reflecting upon my stay at The Woodward, I’d imagine the owner of this property must live by a similar ethos. From the moment you’re met at the airport by a tailor-suited driver and then whisked into the city within the hedonistic comfort of the brand-new Mercedes S-Class and its reclining, quilted leather rear seat, you know that no expense has been spared in the creation of Geneva’s first all-suite five-star hotel. 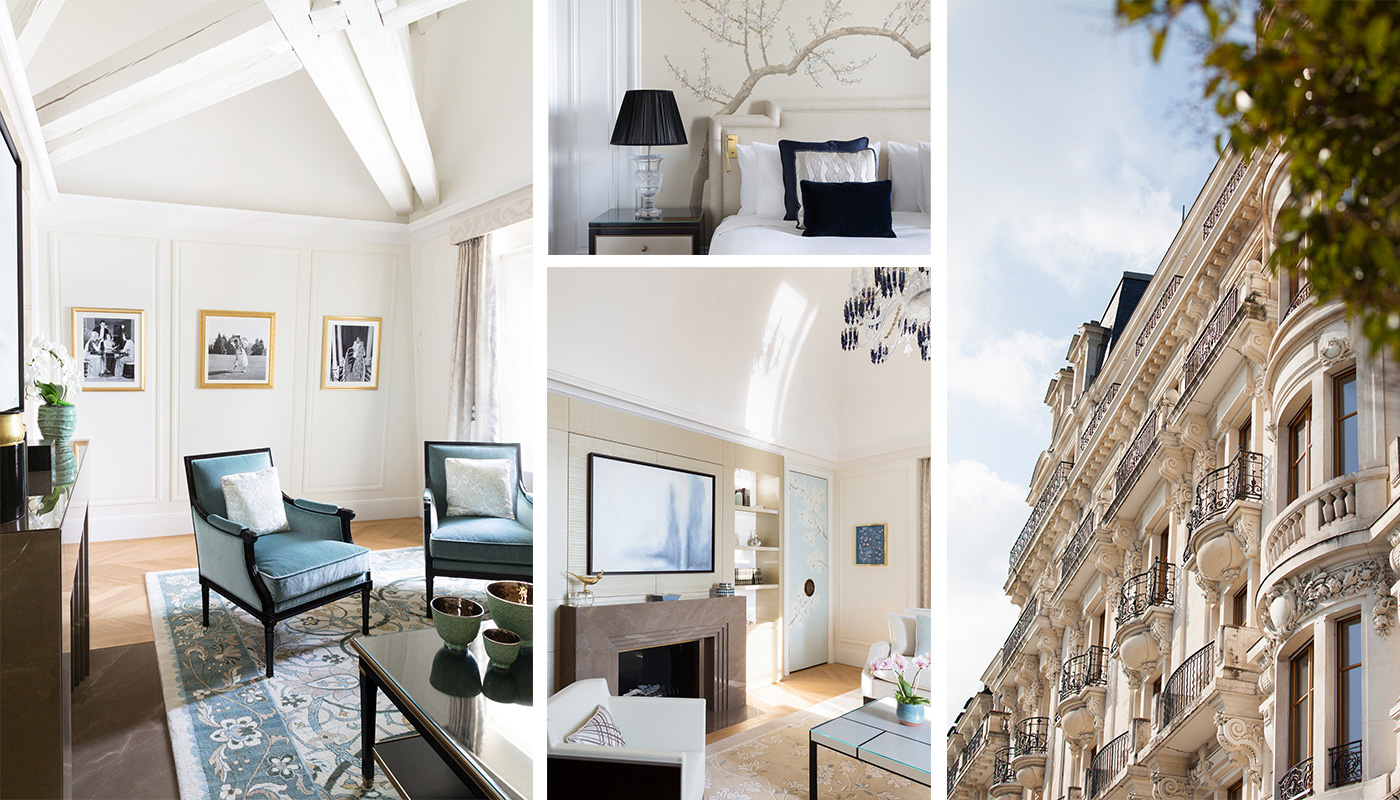 ABOVE LEFT: At the Woodward, Pierre-Yves Rochon and his team blended classicism, such as a Taillardat chest of drawers, with modernism of Christian Liaigre armchairs and handmade Chinoiserie wallpaper. ABOVE RIGHT: The hotel can be found on Quai Wilson, which is named after US President Woodrow Wilson, who served from 1913 to 1921 and helped to establish the League of Nations, a forerunner of the UN. Oetker Collection revealed to us that they went with the name Woodward instead of Woodrow purely because of Wilson’s support of segregation.

The Woodward, which was originally built as a hotel in 1901 before becoming a bank (and then finally a hotel again) mixes a backbone of familiarity, such as Oetker Collection management (of Le Bristol and Eden Rock fame) and Pierre-Yves Rochon designs (who is of course the mastermind behind Le George V, the Savoy and the Peninsula Shanghai) with numerous elements of surprise. These begin the moment you arrive. You see, you don’t enter via some grand entrance on Quai Wilson, nor will you find some formal lobby either. Instead, you slip in quietly through the hotel’s side entrance, located on Place Jean Marteau, and into a small red lift that takes you up one floor to what is ostensibly a discreet living room lined in rich lacquered Macassar ebony wood. Okay, so there is a concierge desk, plus a bar and an all-day dining restaurant to the side, but this is no meeting point. Clearly, the owner did not want The Woodward to be a see-and-be-seen kind of property. It’s probably also why check-in is carried out in the sanctuary of your suite, and there are only 26 suites (21 of which have direct views of Lac Léman). It seems that even the corridors have been designed to limit your interaction with others: There are usually only five suites per corridor (there are five floors) and they added a valet box in every suite so staff can drop things off for you without any unwanted face-to-face interaction. 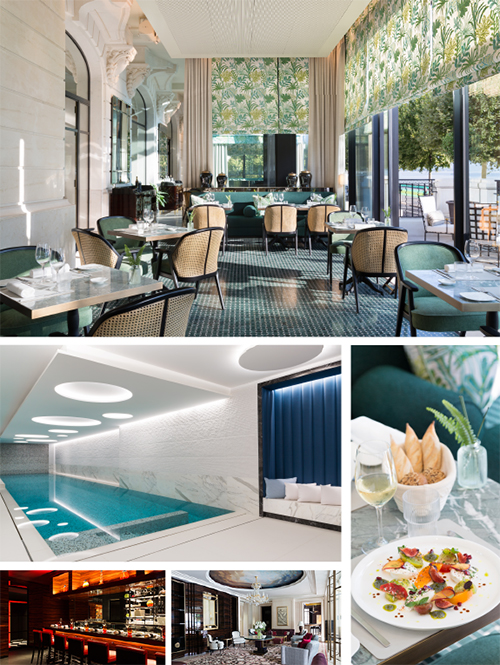 “The experience here was designed to be intimate. You should feel as though you’re at your own residence, not a hotel,” explains Jean-Marie Verdier, the hotel’s head of sales. Mind though, intimate does not mean small. The suites feel like apartments and each has been carefully curated in its own individual way with unique “signature flourishes” that help reinforce this bespoke flavour. For example, some have marble fireplaces, others have rare vintage books but all come with copious amounts of space, huge marble lined bathrooms and some home automation functionality that’s controlled by iPads. The most memorable flourish in my own suite was a large wall of cupboards in the bedroom area, made from gorgeous panels of handmade straw marquetry at the Paris-based atelier of Lison de Caunes. Another detail I particularly loved was how housekeeping would always place a pillowed matt on the floor next to my bed at night so my precious toes could enjoy a comfortable halfway house between the comfort of a high-thread count lined bed and the hotel’s wonderfully fluffy slippers. On the downside, I wasn’t a fan of how the free-standing lights in my room were plugged into non-controllable sockets, as this necessitated me getting out of bed every night and manually switching off the lights despite there being a lights-off button on the home automation iPad.

In any case, there’s much to do in the hotel beyond the sanctuary of your home-away-from-home. First and foremost, The Woodward boasts Geneva’s hottest restaurant right now – L’Atelier de Joël Robuchon. Featuring the multiple-Michelin starred concept’s open kitchen, the theatrical dining experience can be enjoyed by up to 36 people around the counter, but there are also two more traditional seating dining rooms that can be sectioned off for private events should the need arise.

“Chef Joel Robuchon always wanted to open in Geneva and we discussed it on many occasions. Sadly, he didn’t live to see the day but I am sure he would be very proud,” revealed L’Atelier Geneva’s Executive Chef, Olivier Jean, as he showed us around his state-of-the-art kitchen. Jean it seems was handpicked for the job having studied under the tutelage of Monsieur Robuchon, first as a sous-chef at the Étoile Atelier in Paris for five years, then as head chef at Restaurant Joël Robuchon Monaco for five years. Most recently he was the Executive Chef at L’Atelier in Taipei, a position he held for seven years. Clearly he’s doing a great job too, as this new Atelier has been fully booked since the moment it opened on September 1st and the waiting list is currently around a month long – although Jean reveals that this will depend on how large your group is. He also mentions how he is managing both restaurants at The Woodward, meaning both L’Atelier and the all-day dining outpost of Le Jardinier, which marks the vegan-oriented restaurant’s first foray into Europe following the success of its spots in New York and Miami.

Away from the F&B offerings, the jewel in The Woodward’s crown is its Guerlain Spa, something we have come to associate with Cheval Blanc properties. Spanning two floors, a gym, Geneva’s longest indoor pool, as well as six treatement rooms, a couple of Swedish baths, his and her steam rooms and saunas, a jacuzzi, an ice bucket shower, a snow shower and a boutique retail area, this place is absolutely world-class but it’s also extremely exclusive, as it’s reserved for hotel guests as well as 90 annual members (all of which have already been sold). But that, honestly, is the way of The Woodward, it’s a hotel that loves to shroud its majesty in mystery. If you know, you know.