The Dubai Edition is an Ian Schrager and Marriott Collaboration Designed to Provide a Sensory Experience. Confused? Read On.
June 19, 2022 Nicolas Shammas

Sometimes, simply standing apart is enough to make you stand out. It’s certainly the case with The Dubai Edition, which purposefully eschews all of those Arabesque references and ornamentation that we see so often in other Dubai hotels to offer a travertine-and-timber vision of understated luxury. It’s funny but you feel this place is different from the moment you get into a taxi and ask them to take you to “The Dubai Edition”, only for them to answer, “What’s that?” Then again, creating a place for only those-in-the-know is something that The Edition’s founder, Ian Schrager, knows a thing or two about, having previously founded Studio 54 back in the late 1970s. 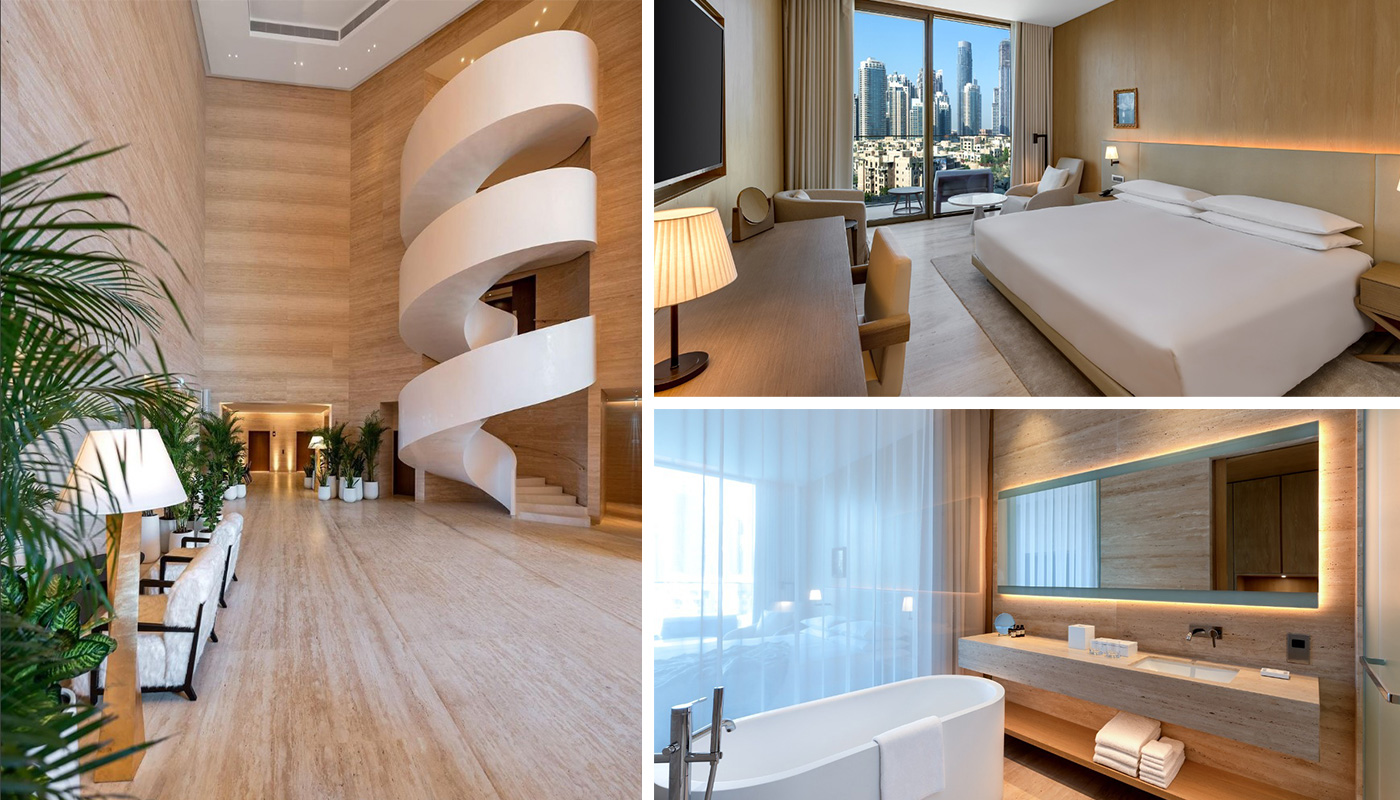 TOP: Located on a side street off Sheikh Mohammed bin Rashid Boulevard, The Dubai Edition is rotated 45 degrees off-axis to maximise views of the nearby Burj Khalifa. ABOVE LEFT: The spiral staircase, which is covered in Venetian plaster, connects the lobby with the mezzanine floor of Jolie. ABOVE RIGHT: Although the hotel has six different room categories, they are all designed in a uniform design language using travertine stone and light oak throughout.

Ian Schrager is of course a legend of the hotel industry. Back in the 1980s, he and his partner Steve Rubell, also from Studio 54, found that their keen instincts for the mood and feel of popular culture gave them a unique perspective that would allow them to significantly impact the hospitality industry. Whether through Morgans and their invention of the “boutique” hotel concept or their various collaborations with Philippe Starck, which saw them, among other achievements, create the “urban resort” concept of the Delano Miami and the Mondrian West Hollywood, Schrager has continually pushed the envelope of what a hotel should stand for and what it should offer.

The Edition however might well be his most significant legacy. For while the Royalton, Delano, St Martins Lane, Sanderson and Gramercy Park all certainly redefined the hotel landscape, they were also a string of unique, sexy hotels that used design to create atmosphere; they were also all small to medium in size. To the wider world, it was precisely this aspect of those properties that became associated with the term ‘boutique’. But for Schrager this was not a defining aspect nor was it what he believed defined the term. “To me, the idea of doing something on a really big scale is interesting. I think everybody misunderstood how deep the boutique market is,” he told us back in issue 40. “Everybody craves an elevated experience. Everybody craves something that’s visually stimulating. Boutique is not just for people who wear black and live in SoHo.” And, thus was born a new project – a collaboration with Marriott International, no less – in the form of The Edition, a hotel chain that would effectively bring luxury to the masses. 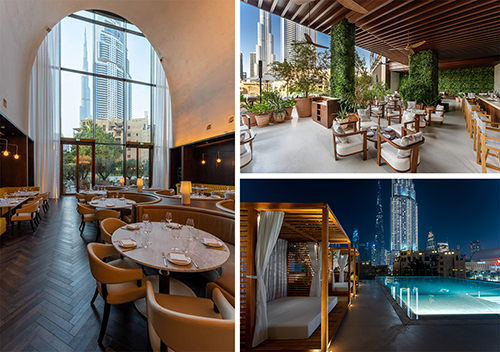 ABOVE LEFT: The theatrical Italian restaurant, Duomo, makes the most of its location in the lobby to create an experience that centres on “the buzz of people connecting”. ABOVE RIGHT: The poolside bar and lounge, Thia, offers amazing views of Burj Khalifa.

Back to Dubai, and it’s important to understand that Marriott International (the world’s largest hotel chain following its merger with Starwood in 2016) already has a myriad of properties in the Emirate, including the Bulgari, Ritz Carlton DIFC, St. Regis Palm Jumeirah, La Ville Autograph Collection in City Walk, and the W to name just a few. So, adding an Edition hotel (a second in the UAE no less, after the one in Abu Dhabi, which opened in 2018) needed to be about more than just keys. (And for further context, you should also know that this one is a Category 8 Marriott Bonvoy property, meaning that it’s top of the pile, so a free night redemption here costs as much as 100,000 Bonvoy points per night.)

Honestly, you’ll only get what it’s about once you visit. For starters, they managed to hide this large 275-room property away in the Downtown area, just 400 metres from Dubai Mall. Its main entrance is a small backstreet affair that’s more LA than Dubai. There’s no pomp and even less circumstance. In fact, there’s barely room to linger. But once you do cross the threshold, you’re greeted by two things, the first is a wonderful signature aroma courtesy of Le Labo (who also provides all the bathroom amenities) and the second is a lobby that draws you in with its soaring 15-metre arched ceilings, three-storey spiral staircase and momentous crystal chandelier. “I think that the one thing hotels have to do is to provide a communal space in the lobby, which is a new kind of gathering place and a beehive of activity that makes the hotel more than just a place to sleep,” explained Schrager in that same interview on the eve of the launch of his first Edition. “It makes it a kind of manifestation of the social fabric of the city that it’s in. Hotels used to be like that. Hotels like the Plaza in New York over 100 years ago, where we had our big events, our weddings, our business meetings, and we went to eat dinner there because it was the best restaurant in town. It was at the very centre of culture. We lost that over the years. So that was my opportunity: to come back in there and try to do something that appeals to people that are in the know and really appreciate the effort we make. A hotel for people who live in the city, as well as those who visit. That is the key.”

What’s on offer here to the people of Dubai is a very discrete speakeasy, Leon, where you can enjoy a cigar while a DJ spins chillout beats, then there’s an Italian, Duomo, also on the ground floor where a light show projected on the arched ceiling competes with gastro-classics. Up the spiral staircase there’s Jolie, where we had breakfast, but many come for a well-priced business lunch. There’s also Thia, which is a bar-deck and pool offering uninterrupted views of Burj Khalifa. And, finally on the top floor is Inti, an independently operated Nikkei-Peruvian top-notch restaurant with a retractable roof and food that’ll have you licking the plate. Each of these spaces offer a very different visual aesthetic and they’re clearly designed to appeal to a gamut of moods more than a business agenda. Even the walk to your room is a sensory experience, because the house music that’s pumped out over the integrated speaker system leaves you more than a little worried about the quality of your imminent night’s sleep. But you’ll see that once you close your room’s thick and heavy door, you won’t hear a peep. Instead, all you have is a Zen-like cool and clutter-free combination of beige wood and stone to help you escape the stereotypes of Dubai. This place has done a good job at fulfilling Schrager’s key mission: “It’s more important the way a hotel makes you feel rather than how it looks.” But it certainly helps if it looks cool too.