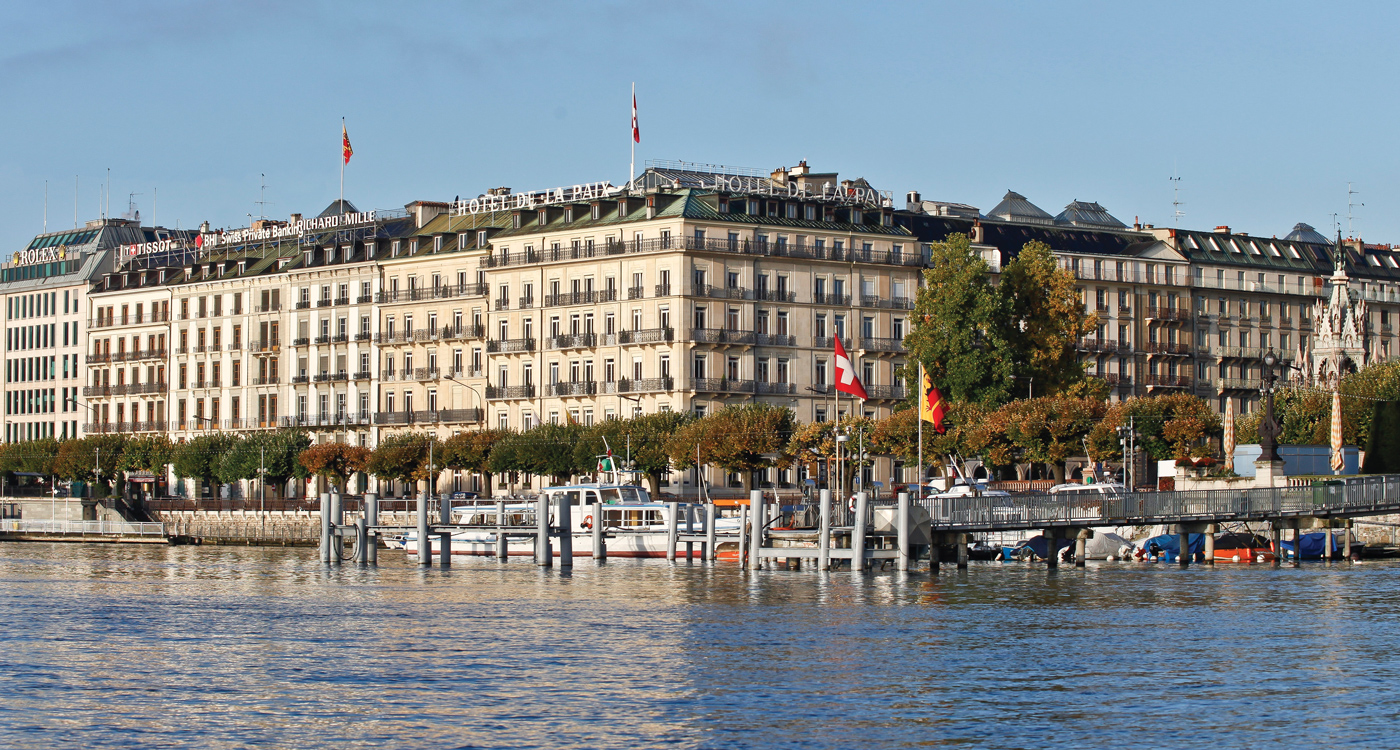 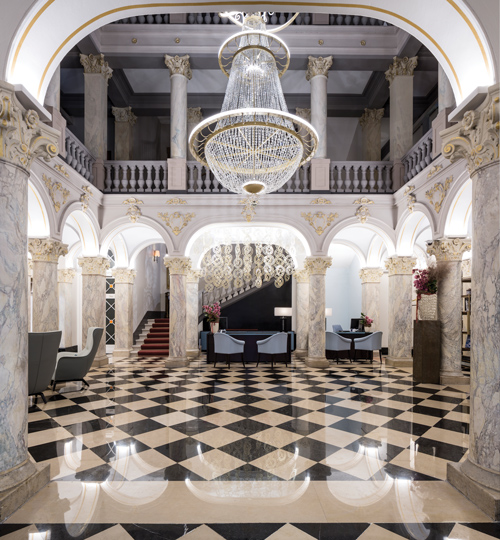 The multi-storey atrium replete with black-and-white marble floors and Italian-style balustrades is crowned with a sparkling, teardrop chandelier encircled by sculptural brass rings.We don’t envy any team tasked with remodelling a property like Geneva’s Hotel de la Paix, even if, in this instance, they had a budget of 23.5 million USD. The hotel has been a beloved landmark on the city’s lakeside promenade since its opening in 1867, with a façade that has occupied a position of prominence for generations of holidaymakers taking in the view, strolling across the Rhône on the Pont du Mont Blanc. The hotel’s interior Rococo crown mouldings and stately Empire style furnishings have played host to heads of states, UN special envoys, royals, celebrities and even Mahatma Gandhi and his goat.

But when General Manager Guillaume Benezech and The Ritz-Carlton team took over the property in the autumn of 2015, the lobby’s deep reds and yellows felt heavy, musty, and well, old. Representing the Ritz-Carlton’s first foray into Switzerland, joining a wave of new luxury offerings in the Alpine nation, the team had to tread especially carefully around the question of how to modernise a landmark property without bulldozing the elements that made it a landmark in the first place.

One illustration of the team’s response to this can be found in the Fiskebar restaurant, part of a property adjoining the original hotel, which was added in 1907. The restaurant itself is achingly au courant both in concept and execution. The Copenhagen fish market theme is ripped from hospitality news headlines, while a multigenerational crowd who look like Patek Philippe models wash down truffled cashews with champagne as they wait for a spot at Chef Alessio Corda’s communal tables, fashioned from reclaimed wood.

But there are subtle nods to the hotel’s history in the Instagram-ready restaurant and adjoining bar, as there are throughout the property. Decades of built up paint has been scraped off to reveal the original colour from the early 20th century, a gorgeous sepia tone with a fresco finish. The colour on the walls is offset by mid-century sofas and armchairs upholstered in sunset and sapphire-toned velvet, placed on original wood parquet floors. Behind the antique wooden bar are original cameo paintings of elegant Genevois engaged in Ritz-Carlton appropriate activities like walking their pint-sized dogs, or taking afternoon tea. 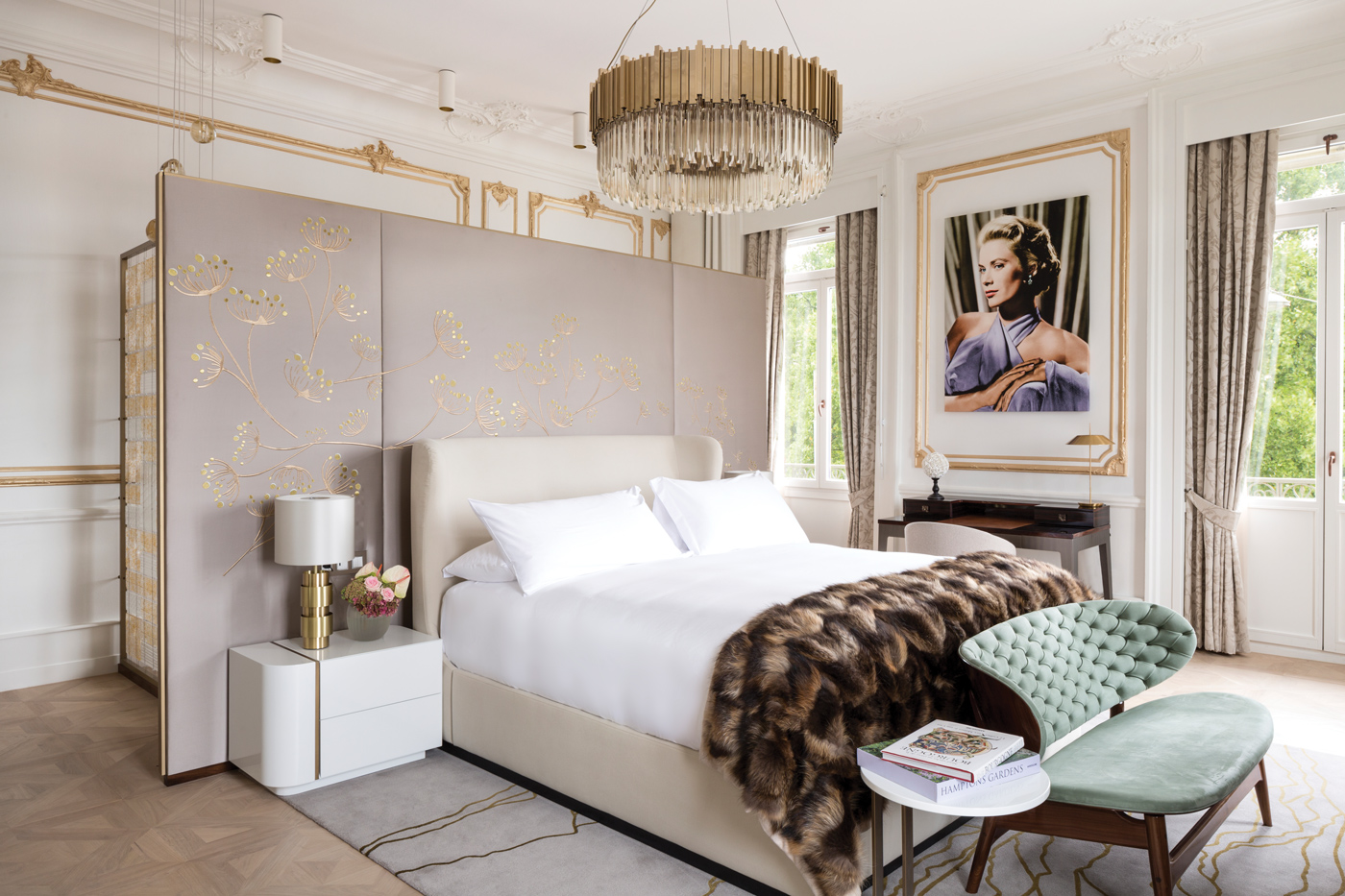 Now a Ritz-Carlton, the Hotel de la Paix has been reconfigured to accommodate 61 guest rooms and 14 suites decorated in soft, muted shades of grey, taupe, and white.

Indeed, Benezech and his team have skilfully highlighted the hotel’s most striking original elements, like the black-and-white checkerboard marble floors that exist in the lobby and on each floor of the original 1867 property, effortlessly underscoring the old-school chic synonymous with the Ritz-Carlton brand. In the hallways of each floor’s landing, for example, are gorgeous Empire style furniture pieces from the original hotel that Benezech and the team couldn’t bear to remove. And the centrepiece of the lobby is an original crystal drop chandelier, revamped with modern steel and slate blue silk.

A grey-blue and cream colour palette is echoed in the sleek rooms, featuring ash-coloured wood, modern brass bedside light fixtures and swanky leather sofas. The scenic views from the windows of rooms facing the lake are reflected in the decor, from the slate blue that brings out the mercurial cerulean of Lac Léman, a shade that changes with the angle of the sun, to the custom carpeting striped with an abstract take on the Jura mountain skyline on the far side of the lake.
The hotel’s presidential suite is a high-ceilinged 105 square metre den of luxury named after its most famous guest, Hollywood starlet-turned-princess of 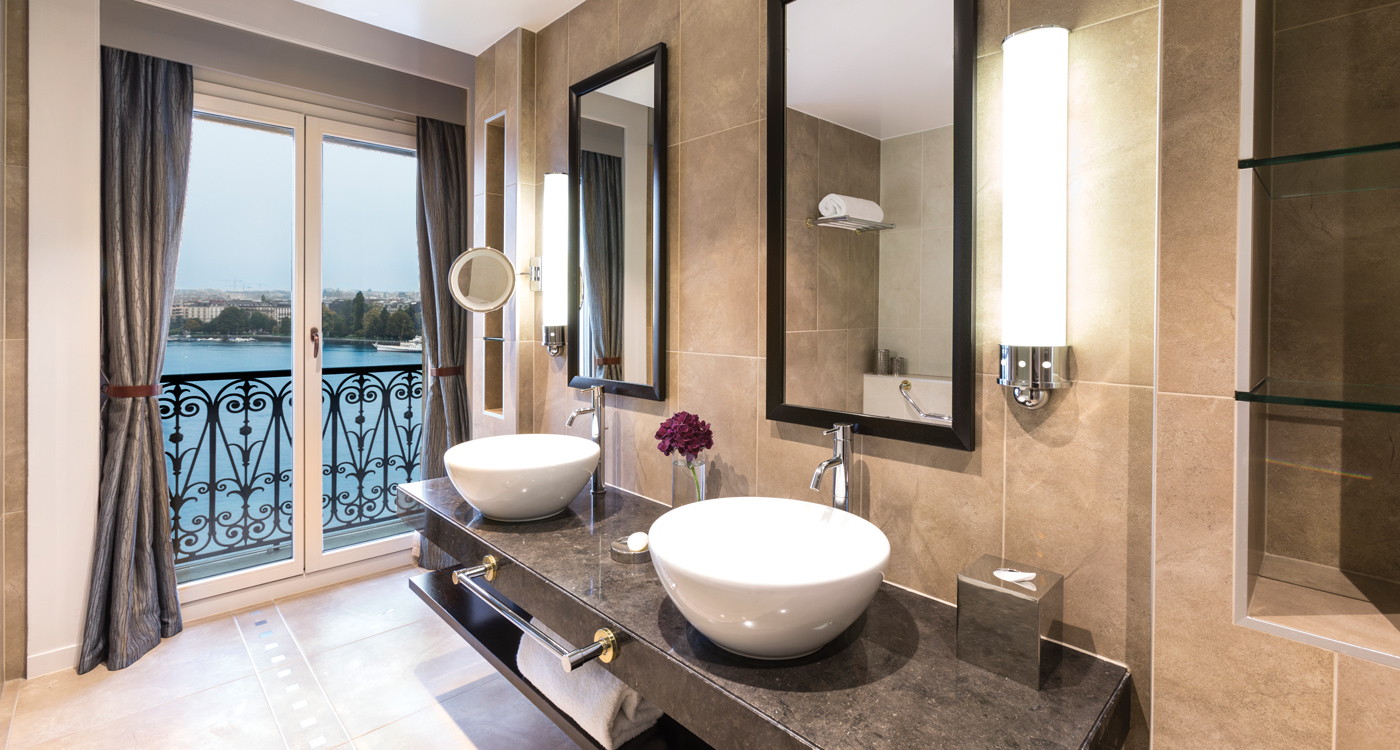 Monaco, Grace Kelly. The suite features a kitchenette and dining room, as well as stylish mid-century furniture beneath portraits featuring Kelly’s 24-karat cheekbones. Touches of luxury are everywhere, including a faux-fur throw on the bed, gilt moulding on the walls and Swiss wildflowers embroidered on the silk headboard.

The success of any renovation may lie in what is retained, rather than redone. Benezech and his team, supported by design agency Il Prisma, have managed to keep what surely is the Hotel de la Paix’s most beautiful feature – its location on the lakefront promenade – at the forefront of the guest experience. Design elements in each of the hotel’s spaces, from the breakfast room to the Fiskebar to the guestrooms, mirror the surrounding natural beauty of the lake and the mountains beyond (among which the famous Mont Blanc is visible in the afternoons).

Guests have been watching migratory flocks of birds swoop around the Hotel de la Paix in the pink dusk light for 150 years. Today, if we are very lucky, we can watch the show from the famously cozy Ritz-Carlton bed. 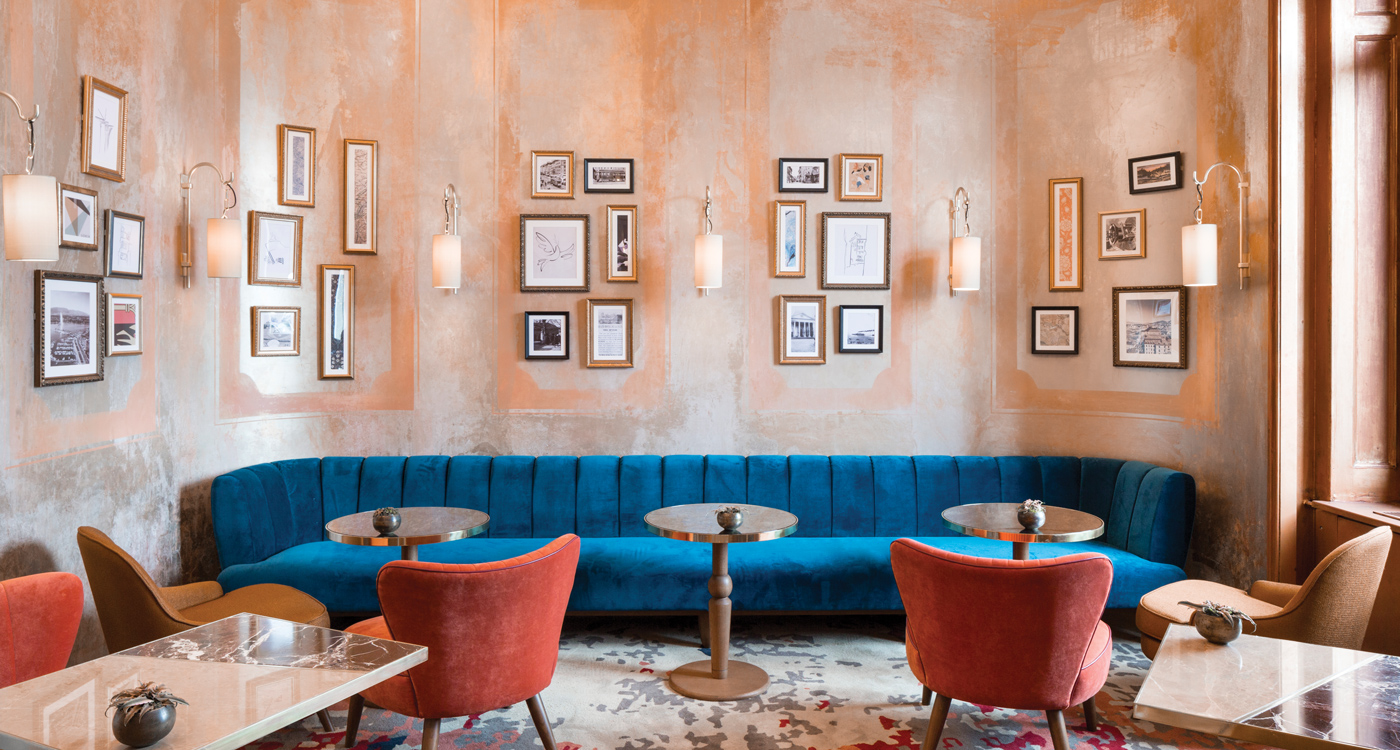 Fiskebar, inspired by Executive Chef Alessio Corda, is first-of-its-kind in Geneva, as it introduces a new Nordic-Fusion concept full of bold flavours, emphasising on high quality seafood as well as organic and seasonal ingredients.