People | Insights | From Anarchist to A-List: The Story of PETA and How You Can’t But Respect Their Dedication 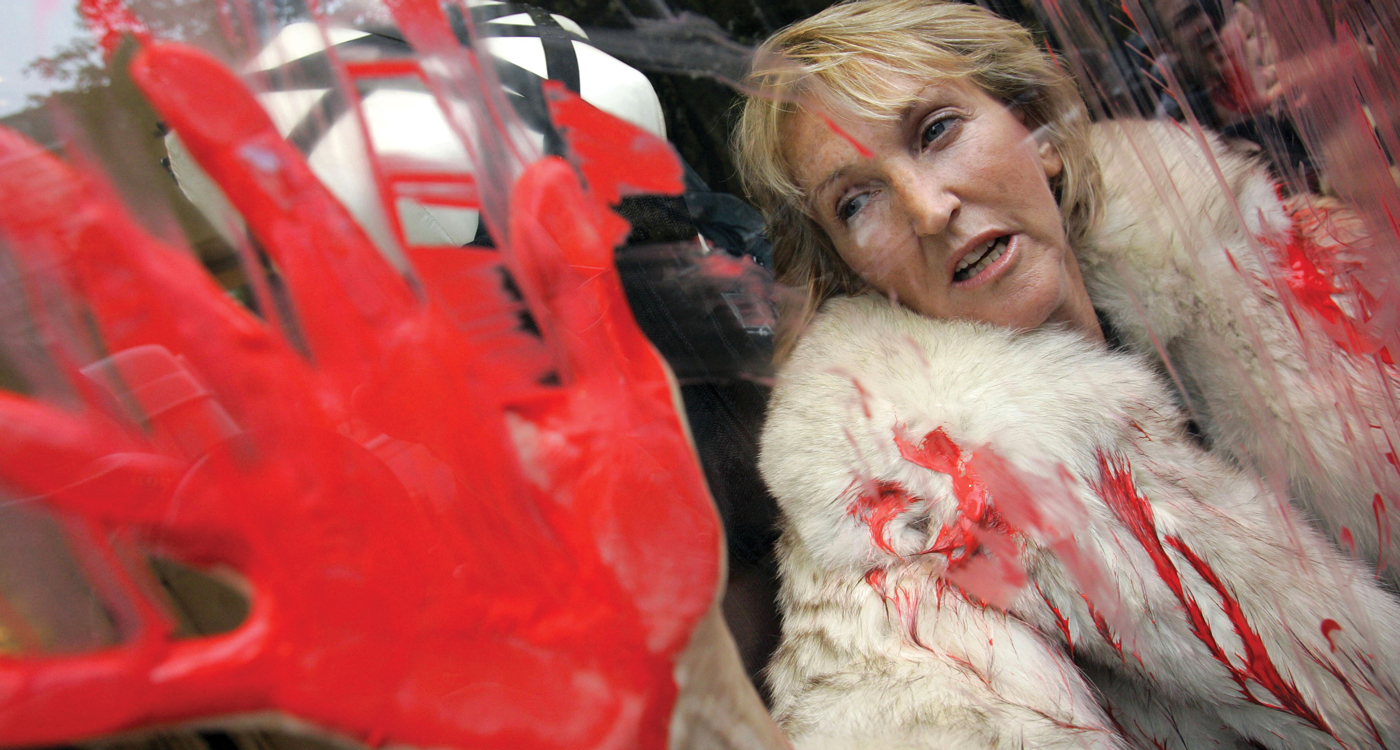 From Anarchist to A-List: The Story of PETA and How You Can’t But Respect Their Dedication
April 10, 2016 Kasia Maciejowska

Founded in 1980, People for the Ethical Treatment of Animals (PETA) is an organisation that lives and breathes its one mission statement: ‘Animals are not ours to eat, wear, experiment on or use for entertainment.’ No matter what you think of their tactics, you can’t but respect their dedication. 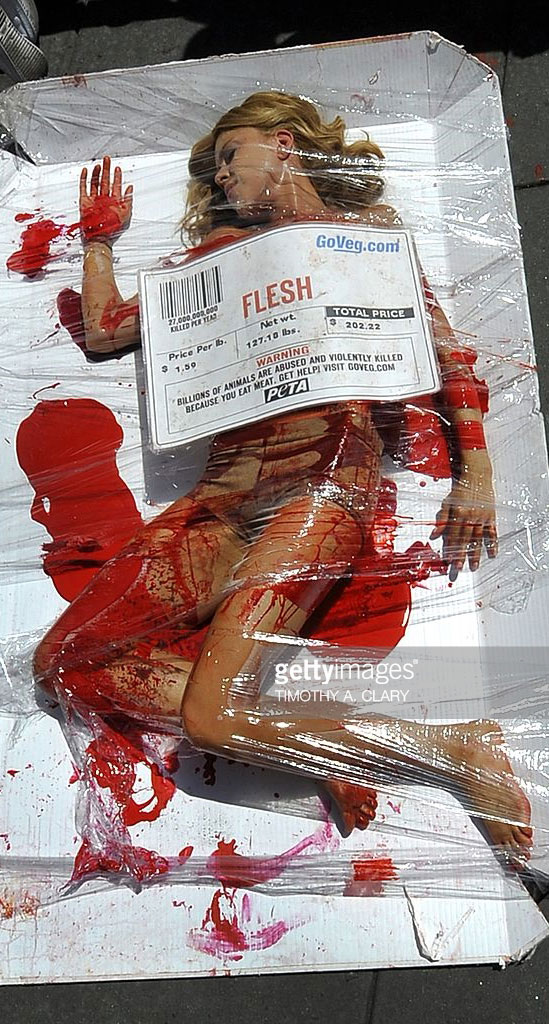 TOP: Ingrid Newkirk is an English-born British-American who began working for the animal-protection movement eight years prior to founding PETA in March 1980, with fellow animal rights activist Alex Pacheco. ABOVE: ‘Meat is Murder’ was not just a rallying cry at one of the many demonstrations organised by PETA, it was also the name of their first celebrity endorsement – a track by Morrissey.

The thing to understand about campaign groups is that they don’t do middle ground. Like all power players, they have goals and PETA’s are that we all become vegan, stop using leather and never ever wear fur. It sounds drastic until you dig a little deeper. Just watch the group’s latest exposé video of young ostriches having their skin ripped off their backs and you won’t just feel uncomfortable about coveting an exotic leather handbag, you’ll also begin questioning your suppertime steak and that new fluffy cuffed jacket in the cupboard. In fact, the aura of luxury that previously emanated from each is replaced by the stench of abuse.

It’s a fact that over the last half a century, extreme animal abuse has become normalised by the scale of industrial farming and the pressure that globalisation has placed on profit margins across the food, fur, and skins industries. As PETA UK’s campaign coordinator, Kirsty Henderson, explains, the group’s lines of argument against this stem from simple ethical questions such as, ‘Who are we to devalue the life of a cow while celebrating that of a horse? Why cuddle a miniature poodle but routinise the torture of lambs? Why subject a conscious ostrich to skinning when we idolise its desert cohabitant the camel?’ In our technologically advanced age, PETA considers there to be no excuse for inflicting violence on other living beings because we now have the option of humane alternatives.

While these ethics are at the core of this non-profit organisation, achieving their end goals is often more important than the means of getting there – PETA essentially wants results and changing the world’s morality isn’t what they claim to do. If people go vegan for personal reasons like wanting clearer skin, higher energy levels or losing weight, that’s fine by them. “When Beyoncé announced that she was a vegan, we were thrilled,” says Henderson, “If it gets people to buy fewer animal products, then that’s what matters”. Idealism may be their main driver but it’s pragmatism that helps them win their battles.

Such smarts propel their celebrity campaigns. No model, actor or pin-up is ever paid for appearing in a PETA ad – they do it for free to support the cause. Penelope Cruz, Charlize Theron, Pamela Anderson and many others have appeared in the group’s powerful, albeit sexy campaigns in the name of animal rights. Yet, glamour is a far cry from the foundation’s work on the ground. Behind the scenes, the organisation uses a mix of controversial tactics such as covert investigations, night-time raids, coercive public relations battles and even buying shares in the very companies they despise, so that they can use their clout to change policies from the inside out.

PETA’s first case – the precedent-setting 1981 Silver Spring monkeys case – resulted in the first arrest and criminal conviction of an animal experimenter in the U.S. on charges of cruelty to animals, the first confiscation of abused laboratory animals and the first U.S. Supreme Court victory for animals in laboratories. They haven’t stopped fighting ever since.

Back in 1985, British pop singer Morrissey became the first celebrity supporter of PETA. Already a committed vegetarian, he was won over after meeting Dan Mathews (then new to the foundation but now a PETA US senior vice president) when his band The Smiths was touring the United States and he ended up donating a live track called ‘Meat Is Murder’ to PETA’s ‘Animal Liberation’ album. “After that, Mathews started reaching out by writing letters to actors asking them to get involved”, says Henderson. “Star of The Golden Girls, Rue McClanahan was the first to collaborate. She hosted a PETA party at a Chippendales strip club, which got a lot of attention, and then narrated several video investigations, including those against circuses and pig factory farms. Alongside PETA US, she also lobbied to get cockfighting banned in New Mexico, and won. Then she got the rest of the Golden Girls cast to appear in PETA US’ first big TV spot, which was against fur. As they say, the rest is history.”

In the 1990s, PETA’s focus shifted to fighting fur in the fashion industry with campaigns starring nude models under the tagline: ‘We’d rather go naked than wear fur’, while more recently, they’ve been combating the use of rare and exotic skins, like alligator and ostrich.

Strangely, it has taken till now for designer brands to begin stepping up their faux designs. Armani, for example, just announced that it was going to cease using fur as of the Autumn/Winter 2016-17 collection, and Calvin Klein has also committed to the cause. But PETA’s longstanding darlings in the fashion industry are known to be Vivienne Westwood and Stella McCartney, and just last year, McCartney debuted a collection of faux pelts labelled Fur Free Fur, using innovative new textures she helped develop, which flaunt their synthetic construction while offering a vastly more luxurious feeling.

When asked about the Origin Assured trademark, which is an assurance that the fur carrying the label comes from a country where welfare regulations govern fur production, PETA’s response is that all fur is the product of extreme cruelty and abuse of animals. And the roaring success of the all-faux brand Shrimps, which was launched in 2013, and is now worn by Alexa Chung, Liv Tyler and Cindy Sherman shows the market is ready for kooky, alternative furs.

As shoppers start to wise up to unethical production practises, even the most well-meaning souls will struggle to fulfil every criteria for being sensitive to animal, human, and environmental welfare. For instance, peruse PETA’s website and you’ll see they’re even against dairy, as they claim that not only is it a terrible cruelty to relieve cows of their milk but the beverage itself is poison to the human system.

Ingrid Newkirk, the co-founder of PETA, is now almost 67 years old but as the mastermind of some of the most off-the-wall schemes she showed she has lost none of her youthful spunk when she publically released her will. In it, she suggested that her body be “used” like an animal’s. She asked that her flesh be cooked in a human barbecue, her skin made into leather products, her feet made into umbrella stands and one of her eyes delivered to the administrator of the U.S. Environmental Protection Agency. Other parts of her body were to be severed, preserved, and sent around the world to draw attention to various causes. As we said, no matter how you view PETA’s manoeuvres, you can’t but respect their determination.