People | Business | Knowledge is Power: It’s True that the Founder of Wikipedia is No Billionaire But He Also Doesn’t Give a Damn 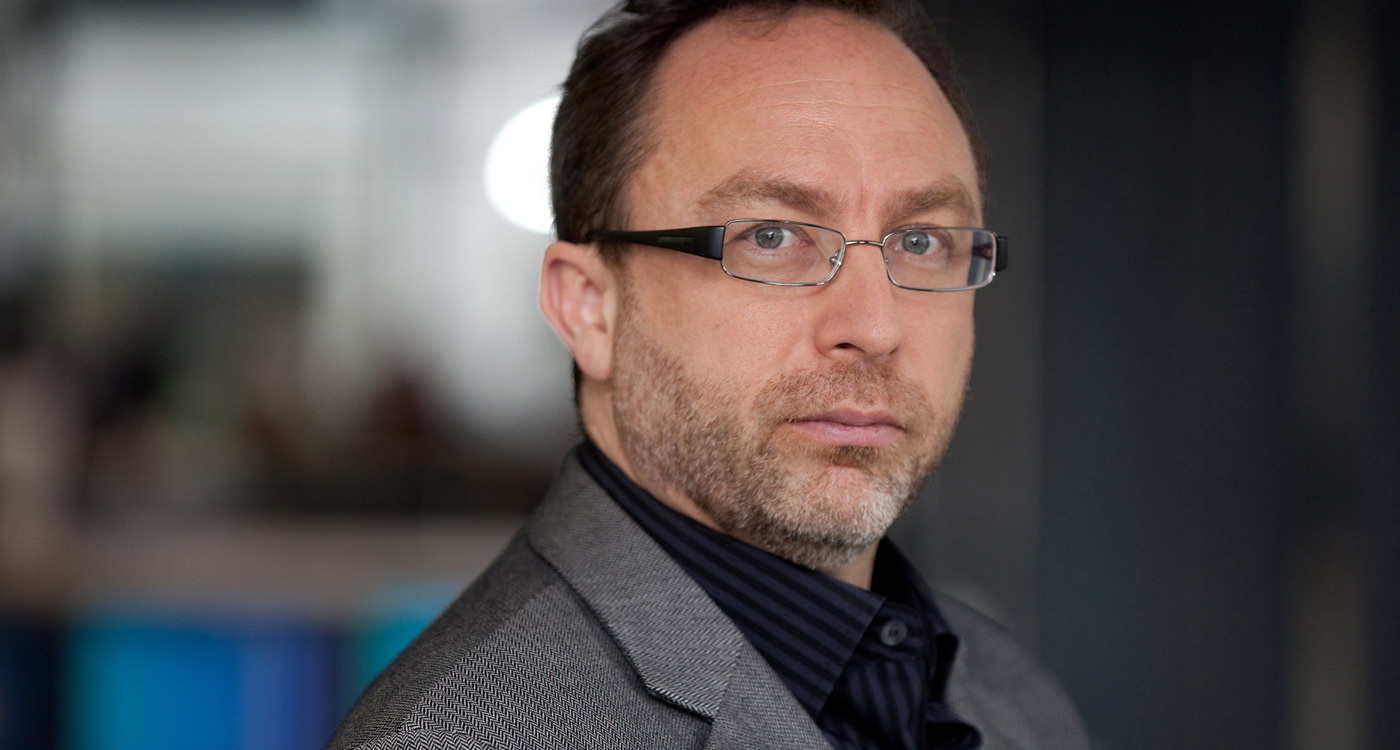 Knowledge is Power: It's True that the Founder of Wikipedia is No Billionaire But He Also Doesn't Give a Damn
April 2, 2016 Eleanor Steafel

As Wikipedia – the free, open content digital encyclopaedia created through the collaborative effort of a community of online users – celebrates its 15th anniversary, its co-founder, Jimmy Wales, says his dream is that every single person on the planet has free access to knowledge.

According to Jimmy Wales’s Wikipedia page, he is an atheist from Alabama, is worth a million dollars, has been married three times, and is known to his friends as “Jimbo”. He is also the co-founder of the online encyclopaedia which, in its 15-year history, has become the most-linked to website on the planet. Type any search into Google and the chances are that Wikipedia will feature among the first three posts. The website now receives more than 15 billion page views a month, with 7,000 new articles created every day by its 80,000 unpaid volunteers worldwide – a mix of one-off contributors and diehard editors who spend their free time poring over entries and debating changes.

Its pages feature no clever bells or whistles, there is no attempt at flashy design, and a limited number of photographs adorn the entries. And yet Wikipedia has carved such a vital niche in the digital age that almost a third of the people alive today have never known a world without it. But for the boy from Alabama (Huntsville, to be precise) who grew up with a thirst for knowledge and a fascination with encyclopaedias, it’s no surprise that his idea caught on.

“We had a set of World Book Encyclopaedias, which my mother bought from a travel agent back in the day,” says Wales. “Every year, they would send out the annual update and sometimes they would just rewrite an article completely,” he says, delighting in the memory. “They would send out these stickers with them and when, say, the Moon article was updated, I would go back to ‘M’ and next to the article on the Moon I would paste a sticker saying: ‘Check the 1979 annual for the latest version of this article.’ I guess that was my first time editing an encyclopaedia.”

Fast-forward 37 years, and the now 49-year-old Wales is at the helm of a website so vast, it would take more than 21 years for a normal person to read the English-language pages alone. But, perhaps unexpectedly, he is also – as his wife’s maid of honour described him in a toast at their wedding – the one world-famous internet entrepreneur who didn’t become a billionaire.

Wikipedia is a non-profit organisation, which survives on donations from small donors who, quite simply, love to learn. So does he look at the Mark Zuckerbergs and Bill Gateses of this world and feel a pang of regret?

“I don’t regret it at all. My life is very interesting, I get to meet all kinds of people, I can do whatever I like. I do things in my life, like going to lobby government officials, and I find it all hugely fascinating. I’m not a very money motivated person.” But nor is he “opposed to people making money”. Indeed, he is hugely admiring of his friend Zuckerberg – who he thinks “will be like Bill Gates, eventually” and move on from Facebook to work on a greater cause.

PERHAPS UNEXPECTEDLY, JIMMY WALES IS THE ONE WORLD FAMOUS INTERNET ENTREPRENEUR WHO DIDN’T BECOME A BILLIONAIRE AND HE DESCRIBES HIMSELF AS “NOT A VERY MONEY MOTIVATED PERSON.

”For Wales, a humanitarian vision has always been the driving force behind Wikipedia. The goal, he says, is to create a world in which “every single person on the planet is given free access to the sum of all human knowledge”. If he had it his way, people in the furthest, most destitute corners of the world would all have a mobile phone preloaded with Wikipedia at no data charge.

Still, Wales is the first to acknowledge that when it comes to the internet, great power comes with great responsibility, and Wikipedia, which celebrated its 15th anniversary in January, has not been without its controversies over the years. 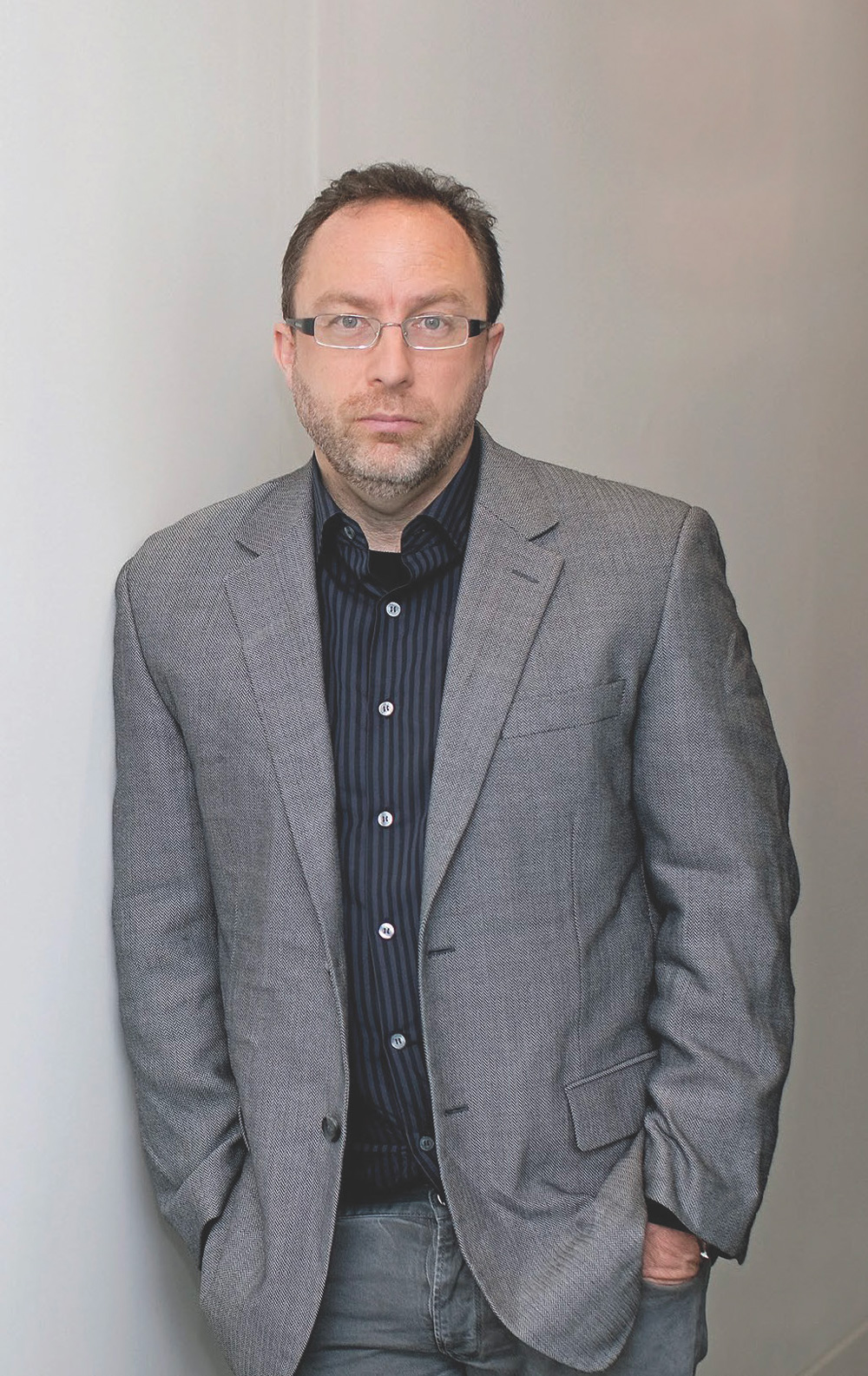 In March 2012, the Bureau of Investigative Journalism, which is based at City University London, revealed that one in six British members of parliament had had their entries edited from within Parliament, with around 10,000 edits to the encyclopaedia made by MPs or their staff – a sharp practice Wales has described as “anti-ethical”. However, he himself has not been immune to scrutiny in this area.

In December 2005, it was reported that Wales had been editing his own entry (fixing a legitimate error, he says): “It’s not perfect – we’re human beings, so it’s a very noisy process but one of the strengths of Wikipedia is the diversity of people working there. So if you try to write a completely favourable article about Donald Trump or Barack Obama, someone will always call you up on it.” And, as he says, one of the best protections against people editing their own entries is that “it is likely to be quite embarrassing if you get caught”.

So does Wales get approached at parties by people wanting him to take details out of their articles? Yes – often. “Normally what I do is I pass it along to our editors to look at, because it’s not always appropriate for me to go in and fix something. If I did, I’d be besieged with requests,” he says. He has though, recused himself from getting involved with articles about people he knows personally. Because besieged he would be, for this is a delicate reminder of the world Wales now inhabits.

In 2012, he married Kate Garvey, an English public relations executive and a former aide to the British Prime Minister, Tony Blair, at an event described as an unusual mix of British politicians, international celebrities and digital royalty. He met Garvey at Davos (where else?) and once described her as “the most connected woman in London”. A valid observation, seeing as she had been Blair’s diary secretary at Number 10 and then a director at Freud Communications, the PR firm set up by Matthew Freud, great-grandson of Sigmund Freud and Rupert Murdoch’s former son-in-law.

But though the couple live in London with their two daughters (he also has a 14- year-old daughter in the States, from his first marriage) and move in high-powered circles, he isn’t a total anglophile. And he certainly doesn’t think much of English politicians, lamenting the “low level of technical literacy among parliamentarians”, which he says has brought about the “hugely problematic” Investigatory Powers Bill – new measures created in the wake of the Edward Snowden revelations which would give online surveillance powers to the government.To Wales, “The idea that we should snoop on 66 million people in order to try and get data on a handful of people is not proven to work and is not likely to work.”

For the boy from the Deep South, whose father ran a grocery store and mother a traditional southern schoolhouse, and whose first wife was the girl from the shop where he worked as a young man, life as an internet entrepreneur in London spending his days lobbying the British government and his nights partying with the elite may once have seemed a little far-fetched.

Despite all of that, he maintains he’s still a “Wikipedian” at heart, even if he has taken a step back from the day-to-day running of the organisation in recent times to go forth and spread the Wikipedia vision around the world. Indeed, he spends around 150 days a year on the road, giving lectures on free speech and lobbying governments about internet freedom, yet he still goes on the site every day, regularly weighing in on debates over the minutiae of entries on the life cycle of a lesser-known plant species or a particularly complicated clause in the American constitution.

Although Wales is rightfully proud of his achievement, he thinks there is still much to be done – and has suitably big plans for the next 15 years. “The growth of Wikipedia in the developing world really remains a personal priority simply because the dream is for every single person on the planet. “So,” he says, “we’ve got a long way to go.