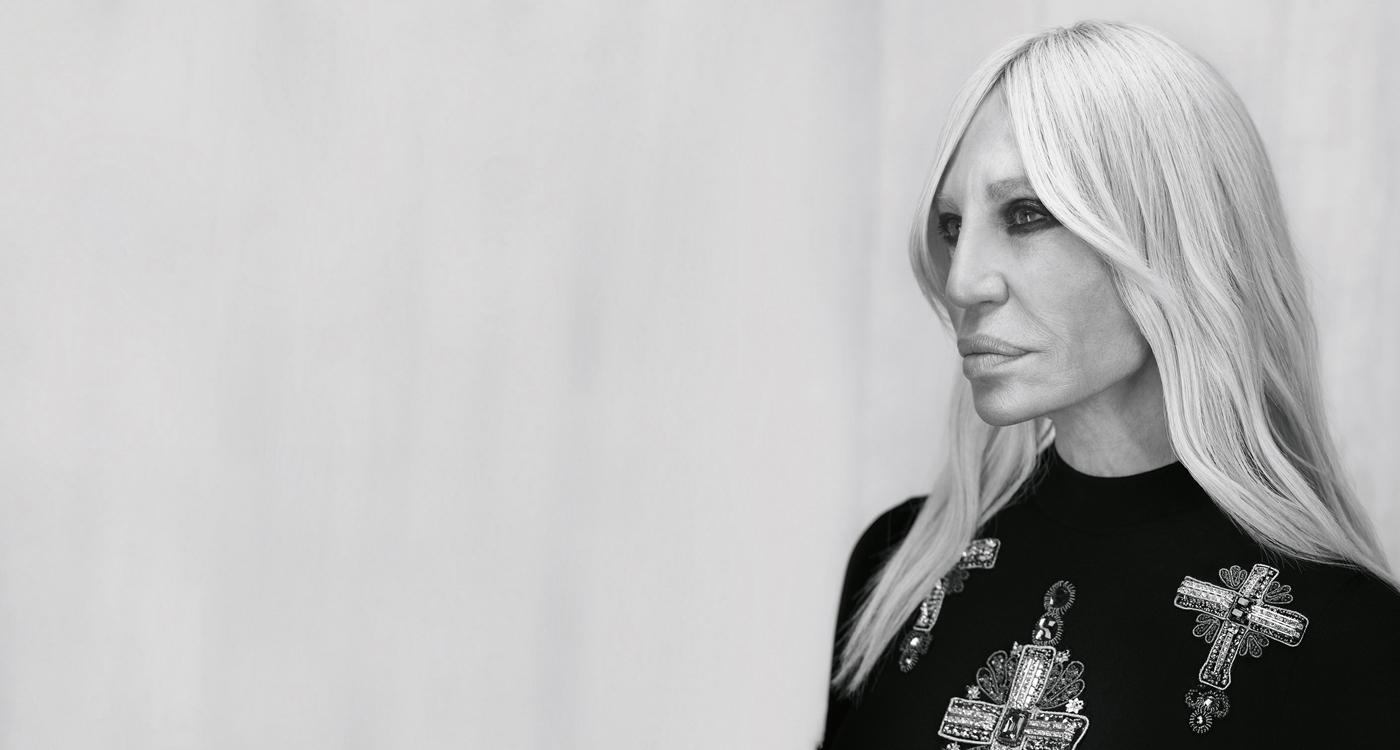 Donatella Versace Reveals Her Deeper Side And It's Not What You'd Expect
April 11, 2016 Tim Blanks

Donatella Versace has confronted death and addiction and come out the other side. Still staying true to the baroque-inspired sexualised and glamorous aesthetic established by her late brother, Gianni, she is staging the ultimate comeback, one that is totally Donatella.

Donatella Versace can be drawn in cartoon strokes: the blinding platinum hair, the tan, the eyes panda’d with mascara, the teensy body in regulation rock-chick gear. It has been an act of mass distraction on her part. I must have been face to face with her dozens of times over the years – but I’ve never really looked into her eyes before; I mean deep into her eyes. Windows of the soul and all that. It’s not just because exposure has always been quick, controlled, limited. Donatella herself has also deflected the gimlet stare by disguising herself as Donatella. Not anymore, however.

Before her haute couture show in Paris a few weeks ago, we sat chatting in a staging area in the basement of Hotel George V and I was transfixed. It was as though a totally different person was staring back at me from a face I thought I knew so well. And it was all down to the eyes.

She has changed. And the change is all over the current Spring/Summer 2016 collection, which she showed in Milan last September. Donatella marched a Versace army down her catwalk, a fiercely militant vision of an empowered woman in khaki and camo, matched to a celebration of Amazonian femininity in draped, slashed, knotted animal patterns. On paper, that reads like a fashion show but with the Portuguese producer and DJ Violet’s update of the old Underground Resistance rave piece, ‘Transition’ on the soundtrack (“There will be people who say you can’t/You will”), the live production surged with the irresistible force of a manifesto. It was a kind of coming out for Donatella. “For so long, I had so many people around me telling me, ‘This is Versace.’ No, this is Versace. They were all hired years ago, so they knew what Versace was. But if you want that, go to the archive – of course, I respect it a lot but that’s ridiculous to me. So, for the first time, it was totally me. I didn’t try to please anybody else. I had the courage to say no, to say to them, ‘You help me to give the message, not what you think, because what you think is you.’”

Change has been a long time coming. “I took too many years already,” Donatella concedes. “There were my problems, which everybody knows, so I was confused. And I was afraid if I didn’t do things like Gianni, people would think I was finished.” So she listened to everyone else until she couldn’t hear it any more. “This thing of ‘print, print, print, print, you’ve got to do print’ – Versace is not print,” she snorts impatiently. “Versace is tailoring. Gianni’s tailoring was impeccable, with the most beautiful jackets.”

In fact, Gianni left her a blueprint for the very same, with the last collection he showed before his murder in July 1997. But the gears really began moving for Versace about five years ago: a new CEO for the company, new people around Donatella and a new partner in the form of New York-based Blackstone Group, which bought a 20 per cent stake in the business – it’s a lot of change, both professionally and personally – and the impact on the business has been obvious. It has expanded to include pre-collections, children’s wear, beachwear and the rebirth of Versus, the second collection that was Donatella’s domain under Gianni. After returning to profitability in 2011, the business posted total revenues in 2014 of 600 million USD, with sales rising 29 per cent in North America, 16 per cent in Asia and 14 per cent in Europe.

MOST MEN ARE FULL OF THEMSELVES. WOMEN ARE NOT ONLY STRONGER, THEY ALSO TAKE NOTHING FOR GRANTED.

Reasons, for sure, to inspire the ass-kicking confidence that radiated from the Versace catwalk in September but it was a particular message Donatella was talking about that gave the collection its spine. “I live in reality, I’m obsessed with the news,” she says. “I listen to everything, read everything. And if I can do something in this world, I’ll try.” What she was being confronted with day after day was discrimination against women – not just the horror show of rape and enslavement that is being played out in parts of the Middle East and Africa – but also in the insidious workplace politics of the West. Equal pay? Wishful thinking. “I’m a strong woman, but many strong women don’t have the opportunity to show what they can do, what they can say,” she says. “I wanted to make a statement that recognised a woman’s power, that said your body is your tool to get what you want.”

Contrary to what some might assume from the popular image of Versace clothes, she is not talking about sexuality but about the way a woman can use her gender to make herself stronger. “Most men are full of themselves. Women are not only stronger, they also take nothing for granted. They’re more ethical,” she says, “I’ll dream a richer dream no matter what.” Her mother has always been her own inspiration. “She was a tailor, with no money, and my father, who was so rich, wouldn’t give her any. So she worked night and day, and became richer than him.”

She says the Versaces were always a political family. “Everybody was fighting for something. My brother Santo was an anarchist when he was at school. My mother had to hide him after demonstrations when the police were looking for him.” And now the state of the planet is equally worrying. The ebola crisis temporarily put paid to an initiative she was about to embark on in Africa with the Bill & Melinda Gates Foundation. She is keen to find a similarly strong body to partner with on a response to the migrant crisis in the Mediterranean. As for the US election, has she met Donald Trump? “Unfortunately, yes. We were doing a shoot with Madonna at his property Mar-a-Lago. He was not supposed to be there… He’s very on you.”

One word that Donatella uses repeatedly is ‘real’. The image may be as alien-iconic as Karl Lagerfeld’s but the experiences of losing her brother and struggling with addiction, colour her as a survivor. And that’s relatable. “I am real,” she insists. “The eyelashes? No. But the rest is real.” In the same way, she feels her clothes represent a particular contemporary reality, the empowerment through dress that she talks about. She calls it ‘aspirational reality.’

Curiously, her daughter, Allegra, and her friends don’t share Donatella’s faith in the idea. “About the politics, yes, but not about the clothes,” she says. “And yet I see women wearing more and more of my day clothes. They don’t wear a whole outfit anymore, it’s more pants and a T-shirt. I like that, too.” She’s surprisingly off-hand about the red-carpet hothouse, where Versace has always thrived. “It’s not reality. If you dress a star, your name is all over the world, but you don’t sell more.”

A recent convert to Instagram, her reality is now tempered by technology as much as everyone else’s. She loves it. At the same time, she appreciates the peculiarity of her jack russell, Audrey, having 5,900 followers of her own. “We come from a world of books and writing with a pen, and I miss it so much. My son, Daniel, wrote me a note and I said, ‘Darling, what the f*** are you writing? I don’t understand.’ They write so badly now. I miss that kind of culture, that way to express myself.”

But now she has The Sunday Times Style to keep her warm. Editing a magazine is a way of preserving tradition. “It’s like reliving my past, my culture where I grew up. I like paper. I like its feeling.” It also gave her an extraordinary opportunity to style collections by other designers, including Christopher Kane (whose brand is now part of Kering) and Riccardo Tisci (the Creative Director of Givenchy, which is part of LVMH), both of whom, in their own ways, have injected new blood into the Versace veins. “I love Riccardo’s way of thinking,” Donatella says. “It’s always so interesting what he tells me about his collections. I want him to explain to me where he came from. One thing that’s very good in fashion now is that designers talk to each other, which never happened before. Can you imagine? Armani and Gianni?” She laughs heartily at the thought.

Donatella turned 61 on May 2nd. I suggest to her that ageing can be liberating for women. “‘I’m so happy I’m ageing, I can’t wait to be old’ – I’ve never seen that in an interview,” she scoffs. On the other hand, she acknowledges, “You edit as you get older.”
Editing a magazine, editing a life, both require and bestow clarity of thought, and that’s what Donatella seems to have now, to focus the Calabrian fierceness.
“The future belongs to women,” she says. “They’re stronger and they’re more willing to fight than men.” And when will this future come to pass? “Before I die, I hope.” Although that’s just about the only thought she gives to the final curtain. “There’s nothing after this,” she declares. “I think life finishes.”

That declaration could be Donatella’s own bequest to the business her brother founded, because it distils the entire history of the house of Versace – its triumphs and tragedies – into one incontrovertibly real dictum: carpe diem. Seize the day. This is her moment, and she’ll be damned if she doesn’t make the most of it.