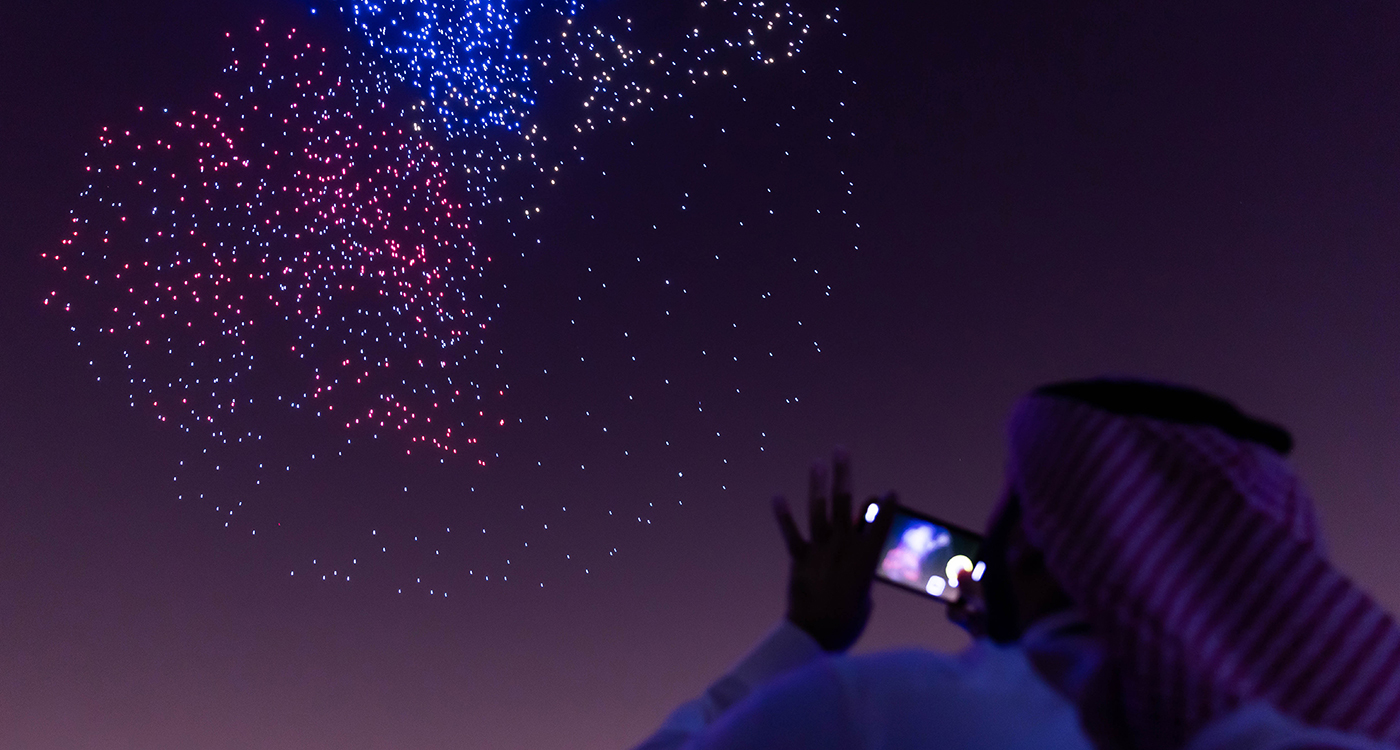 The second edition of Noor Riyadh (part of the Riyadh Art programme), ran from November 3rd to the 19th last year, transforming Saudi Arabia’s capital into a glittering gallery without walls. This festival, which was three times larger than the inaugural one, gathered over 130 artists from more than 40 countries, with 190 installations throughout the city – from deep in the Saudi desert to parks and plazas. The theme this time around was ‘We Dream of New Horizons’ and it showcased a sense of optimism for the future, renewal and transformation. 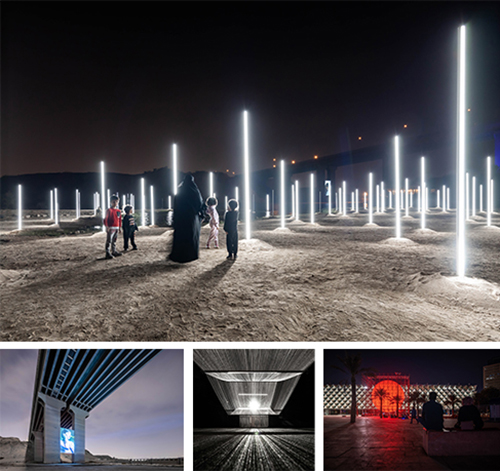 “Noor Riyadh is a big part of plans to creatively transform the Kingdom’s capital into a vibrant and cosmopolitan global city, through arts and culture,” said Riyadh Art’s programme director, Khalid Al-Hazani. “It features public artworks and diverse community activities that provide enriching art experiences, which bring together local communities, from families to artists, students, professionals and more, with international audiences from across the globe.”

Saudi artists Muhannad Shono – who represented Saudi Arabia at the 2022 Venice Biennale – took over Bayt Al-Malaz, a four storey 1980s building-turned-art space, with a large-scale multi-installation named ‘I See You Brightest in The Dark’ involving thousands of white threads that were hung and overlapped like complex looms across pitch black rooms. A soundscape by Somali musician FaceSoul accompanied the experience, adding a soothing soundtrack to the contemplation Shono’s work invoked.

“It’s about coming to terms with loss, the intangible and the tangible,” Shono told us. “It stems from a personal experience of losing someone very dear to me, and them having come to visit in a dream one night, only for me to wake up and realise that they had passed away at that very moment. The installation is an attempt to weave back something that was once tangible in my life,” he added. “I used 300,000 metres of white thread to mimic the visitation of lights and turned it into a library of memories, like spools.”

As visitors would make their way up through the building, they’d ascertain that each room was an attempt to come to terms with loss. But as Shono pointed out, it could also be interpreted as the unbinding of an idea or object that was once a constant in someone’s life. Finally, once they reach the rooftop, they would see the threads arranged like a hanging white sheet – a clean slate of acceptance and the ability to move forward. The thought-provoking work garnered much attention at Noor Riyadh. 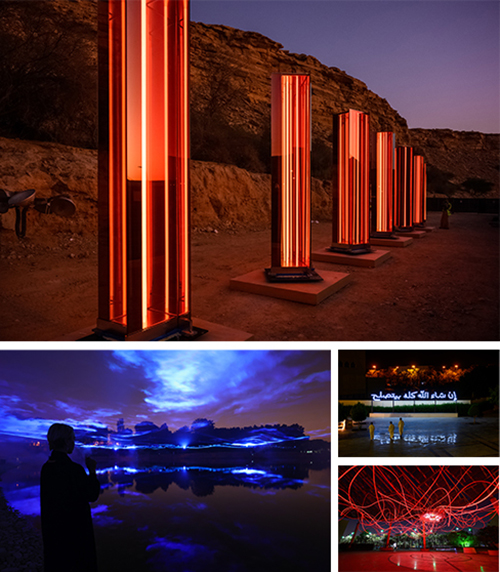 ABOVE TOP: ‘Light Horizon’ by Dutch artist Sabine Marcelis was in Wadi Namar and consisted of neon lights encased in staggered pillars of coloured mirrored glass. BOTTOM LEFT: Another Dutch artist, Daan Roosegaarde, recreated a famous artwork of his called ‘Waterlicht’ at Salam Park involving a captivating and mysterious laser show. MIDDLE RIGHT: ‘God Willing, All Will be Restored’, an artwork by Palestinian-Jordanian artist Ayman Yossri Daydban was placed on the roof of the derelict Irqah Hospital. BOTTOM RIGHT: The impressive ‘Amplexus’ by Grimanesa Amorós encapsulated love, passion and perseverance according to its Peruvian creator.

“It’s about the viewer embracing the architecture and the space around,” Amorós told us. “I spent about three weeks installing this piece, and I witnessed so many sunrises and sunsets that the colouring for the lighting sequence in the middle seamlessly changed. The shapes [of the tubes] were made to allow viewers to feel they are part of the desert. I actually had a strong conceptual idea for the piece but I wanted to allow the viewer to make their own conclusions and inspire them to make changes in their daily lives too,” she added. “I very much enjoyed watching people, especially children, looking up at it, interacting with it and trying to guess what it is.”

Alongside the main festival, an exhibition of light art co-curated by Neville Wakefield and Gaida Almogren and entitled ‘From Spark to Spirit’ was staged at JAX 03, where it will remain until February 2023. The exhibition, gathering 30 artists, traces the role light plays in shaping our relationship to a world for which light itself has become the signal of change.

Saudi artist Lina Gazzaz’s ‘Converting Light into Idea’ tackles both the visual and spiritual representation of light, with a series of hand-sculpted glass objects lit from within. The sculptures try to trap the glowing ember only present when glass is hot and malleable, as an allegory to how fleeting life is and the soul’s common depiction as light.

“It’s about the properties of light according to quantum physics and visual mechanics; how the brain sees light slightly delayed but also about verse of the Quran where it describes physical light and the inner light,” Gazzaz said. “The whole thing is about capturing that fraction of a second where light is transmitted and the beauty of that.”