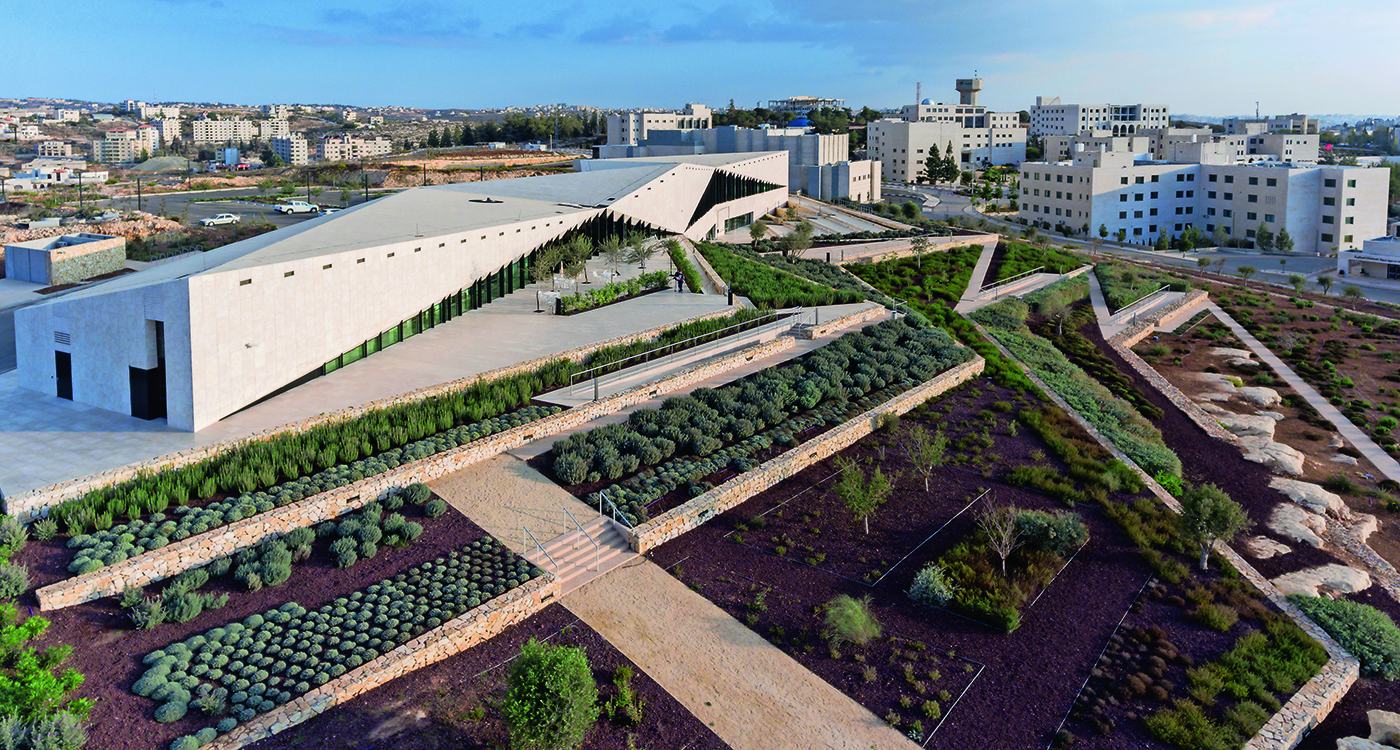 The Palestinian Museum honours the country’s history and represents an optimistic investment into its future. It’s also a remarkable architectural project.

A museum to represent any one people, or nation, seems destined to be a reductive project, all the more so when the nation in question is as fraught and fractured as Palestine. How can a building and its grounds, as well as the exhibits it hosts, represent a nuanced picture of a nation with all its attendant contradictions and grey areas?

The organisers behind the Palestinian Museum, inaugurated in May 2016 on the campus of Birzeit University in the West Bank about 25 kilometres northwest of Jerusalem, had nearly 20 years to ruminate on the answer to that question. The plan, to build a museum dedicated to Palestinian culture, was first made in 1997, but organisers didn’t break ground until 2013. Ensuing (and predictable) political turmoil kept the project in limbo until it was eventually forced to open last year without any actual art hanging on its walls.

Indeed, it was quite amazing that the unexpected postponement of the inaugural exhibition did not stop the museum from opening. This was a testament to the strength of the project and the team behind the 28 million USD project – 95 per cent funded by private Palestinian families and institutions including a foundation started by Abdel Mohsin Al-Qattan and the Shawa family’s Bank of Palestine. Ultimately, the museum debuted in September 2017 with Jerusalem Lives, a collection of works from nearly 50 Palestinian and international artists, focusing on how the ancient Middle Eastern city has developed from the perspective of the Palestinian people, a show that includes personal effects Palestinian refugees took with them when they were forced from their homes in 1948. 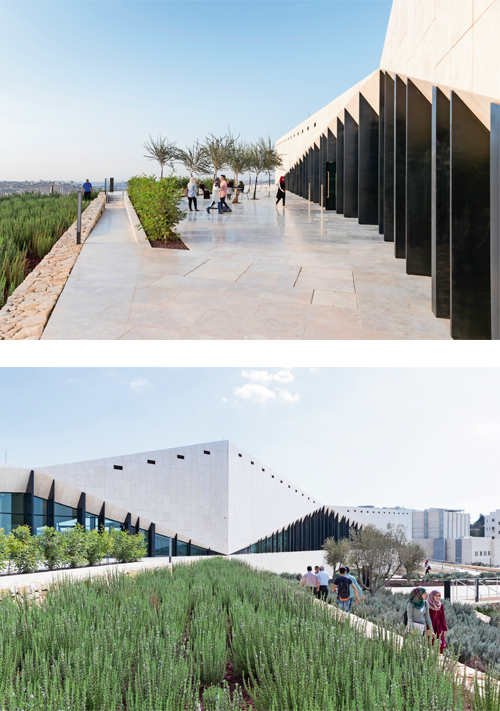 Designed by Dublin-based architecture firm Heneghan Peng, who were the winners of an international design competition in 2011, the museum was conceived to blend into and reflect the grounds it occupies. It’s an angular structure, covered in smooth white local limestone and huge panes of glass. The land covers an area of 3,500 square metres, and comprises exhibition spaces, an open-air amphitheatre, indoor and outdoor cafés, classrooms, offices, and storage areas. The stone roof, walkways, and retaining walls are the same cool white colour as the stone naturally found in the region. This is very intentional. On the phone from her office in Dublin, lead architect Róisín Heneghan said that her firm designed the project to tell a larger story of a diverse culture.

“We tried to make a place that would speak to people in the area for a long time to come,” says the architect. The team was aware of the risk the project faced, namely that the building, meant to showcase Palestinian history, culture, crafts, and lifestyle, could become a symbol for a much broader set of political issues. “If the building were to make a strong statement on Palestinian identity today, it might be applicable to a certain group of people now,” Heneghan says, “but, as time goes on, it would run the risk of becoming dated.”

The team therefore drew inspiration from older, more telluric referents. “The cultural landscape is based on a land cultivated by so many different people coming through it, on trade routes from all directions,” she says. “Even if you look at the cultural artefacts from antiquity, a lot of the art is based on things that grow there. Looking at the land through this lens, you get at a much deeper history and avoid imposing a symbolic meaning that may not remain pertinent.”

Viewed from above, the building and its grounds appear as a zigzag shape akin to a bolt of lightning, but the shape is referencing agricultural terracing and embeds the museum into its immediate site. A trompe l’œil is also used to give the impression that the building and its gardens are emerging organically from the land itself. From certain angles, the lines of the garden and building converge into shared vanishing points, making it appear like they are parts of a single tableau rather than separate entities.

Situated at the top of a hill and covered in white stone, the building from far away could resemble a rocky white outcrop, or “crown,” as Heneghan puts it, that is, if there remained any hills around it that had not already been built on. The Israeli government is notorious for selecting hilltops for its settlements, occupying the physical high ground and, more insidiously, gaining a view of Palestinians living below.

It was important that the museum have a strong identity and be seen at the top of the hill, rather than being more embedded in the ground.

Heneghan denies any intention to subvert this paradigm, but there is a subtle nod to equitability in her explanation of the firm’s reasoning for selecting the hilltop as the site for the building. “The museum itself is on the top of the hill because it’s visible from far away, and you have a view of the Mediterranean, which most Palestinians in the West Bank can’t get to physically, or, for that matter, even see. It was important that the museum have a strong identity and be seen at the top of the hill, rather than being more embedded in the ground.” 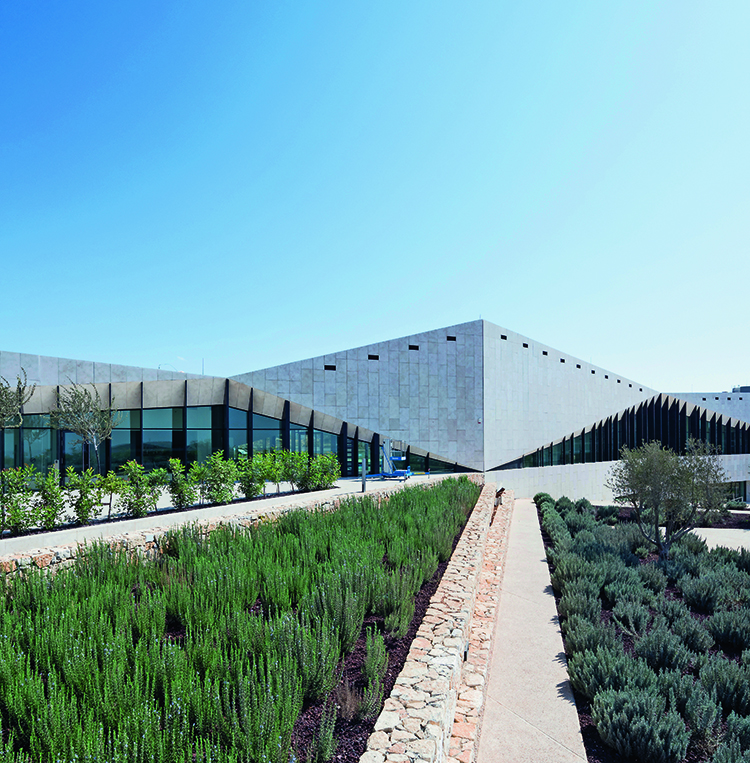 The gardens and their plantings also play a fundamental role in the design of the site, in terms of making the project accessible to people from a wide variety of backgrounds, as well as firmly anchoring it within its physical context. “The gardens expand the available area of the museum, bringing in people who may not be particularly interested in the exhibition. You create the opportunity for visitors to make a day of it, hanging out in the garden and seeing the exhibition if they wish,” she explains. Programming in the gardens will, Heneghan hopes, encourage yet another form of engagement with the space.

The terraces situated close to the building are planted with neat rows of native trees and flowers, while those further away down the hill to the west more closely resemble the wild land beyond the museum’s boundaries, planted with a mix of local and non-native species to indicate the region’s history as a trading hub. Likewise the museum has plans to be a trading hub, for culture, and its first satellite exhibition, exploring traditional Palestinian embroidery, launched in May 2016 at Beirut’s Dar El-Nimer cultural space, with further plans calling for satellite shows in Jerusalem, the Gaza Strip, and other centres of the Palestinian diaspora.

According to Heneghan, fluid interaction with all aspects of the museum will determine whether the museum will become part of the Palestinian social fabric, rather than simply part of today’s zeitgeist. “As architects,” she says, “we have to allow people and artists to come in, inhabit the space, and occupy it for themselves.”