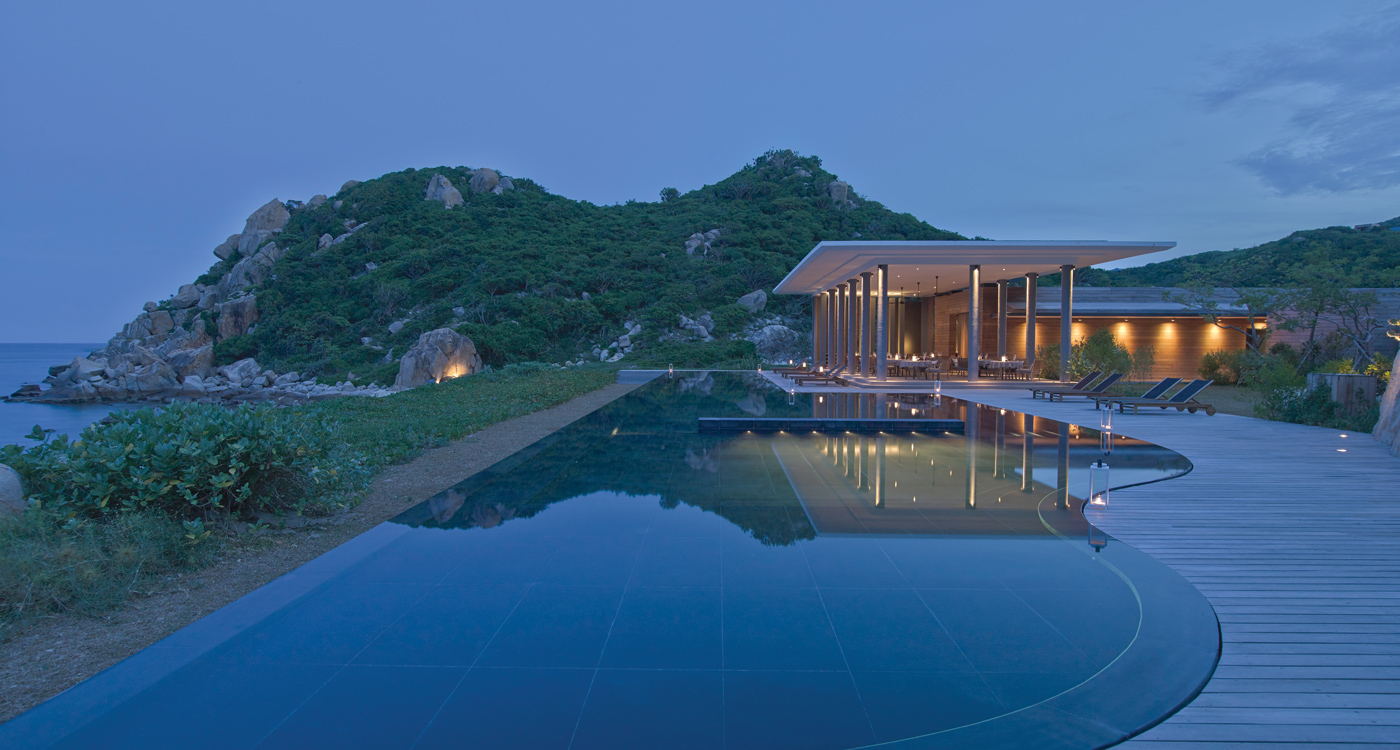 Aman's New Amanoi Hotel is Another Great Reason For Considering Vietnam as the Next Place You Travel To
April 13, 2014 Warren Singh-Bartlett

Nestled in the gently undulating hills overlooking the dramatic coastline of Vinh Hy, the new Amanoi is not just a secluded getaway, it’s another compelling reason why you should visit Vietnam.

I am way ahead of you. When it comes to being an ‘out-there’ travel spot, Vietnam hasn’t genuinely qualified since mid-1975. Off the more beaten path, yes. Not your first Southeast Asian destination of choice? Probably. But does that make it intrepid as a destination? Well, yes. And no.

Let’s start with that ‘no’. Compared to many parts of the world today, ours included, Vietnam is a bastion of stability. Streets are safe, people are peaceful and though some parts of the country are still heavily mined, your average visitor has more to fear from speeding scooters than they do from a toe-popper or a step-and-pull.

Ho Chi Minh City is once again a bastion of effusive Americanophilia. Hanoi has as many artists as it does heritage buildings. Exquisite, almost Michelin-worthy cuisine is to be had for pennies at street corner stalls all over the capital – people here stand in line for an hour before some stalls open, they’re that good – and Vietnam must have one of the highest per capita ratios of cafés this side of Italy. If you think the Romans still have that market cornered, believe me when I say that until you’ve tasted a tasse of tart, treacly black Highlands blend, served with a dollop of condensed milk and coconut milk froth on top, you have no idea what ‘cá phè’, as the Vietnamese call it, is all about. 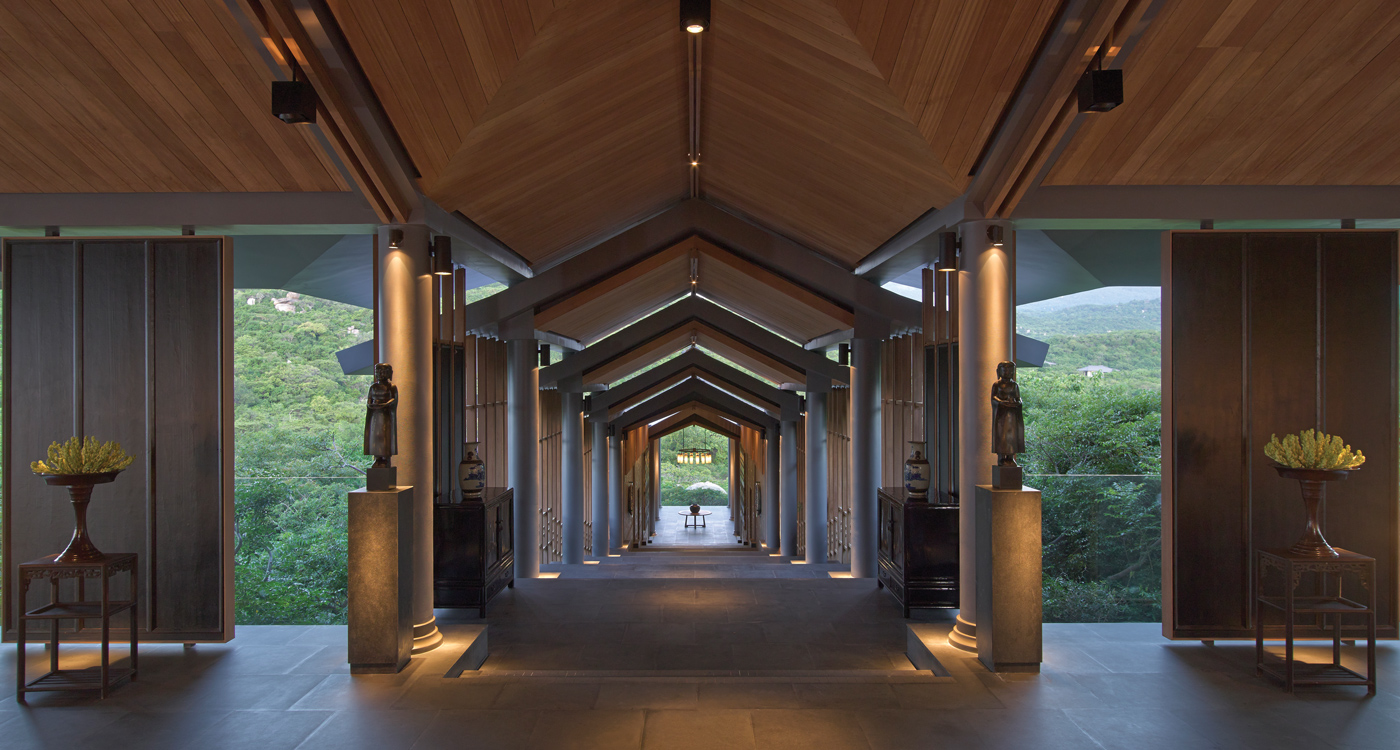 ABOVE: Guests enter the resort via a broad bank of stairs leading to the hilltop central pavilion from where you can enjoy a dramatic view of Vietnam’s gorgeous southern coast, and a bird’s eye perspective of the resort itself.

The ‘yes’ side is comparatively short and boils down to a single factor; development. Or rather, the lack of it. While this makes Vietnam a draw for backpackers, who prefer to get in before the ravening hordes, it hasn’t made the country as appealing to the high-end visitor.

That may be about to change. Deep in the thick coastal forests of southern Vietnam, on the sculptural hills that rise above the crystalline waters of Vinh Hy Bay, one of the world’s most renowned purveyors of out-of-the-way hotel excellence have recently opened their doors.

The purveyor in question being the Aman group, the property in question – the Amanoi – is less hotel and more clutch of stunningly designed individual villas, laid out with enough room between them that you can, if you wish, feel like you have this entire swathe of coastline to yourself. For despite Vinh Hy’s evident attractions – acres of pristine forest bursting with birds and other wildlife and a sea so green and so clear it looks more like liquid emerald than simple saltwater – the Amanoi has the luxury of being the only hotel for miles. Delicately scattered across a 42-hectare site in the heart of the Nui Chua National Park, it is likely to retain that crown for some time to come. 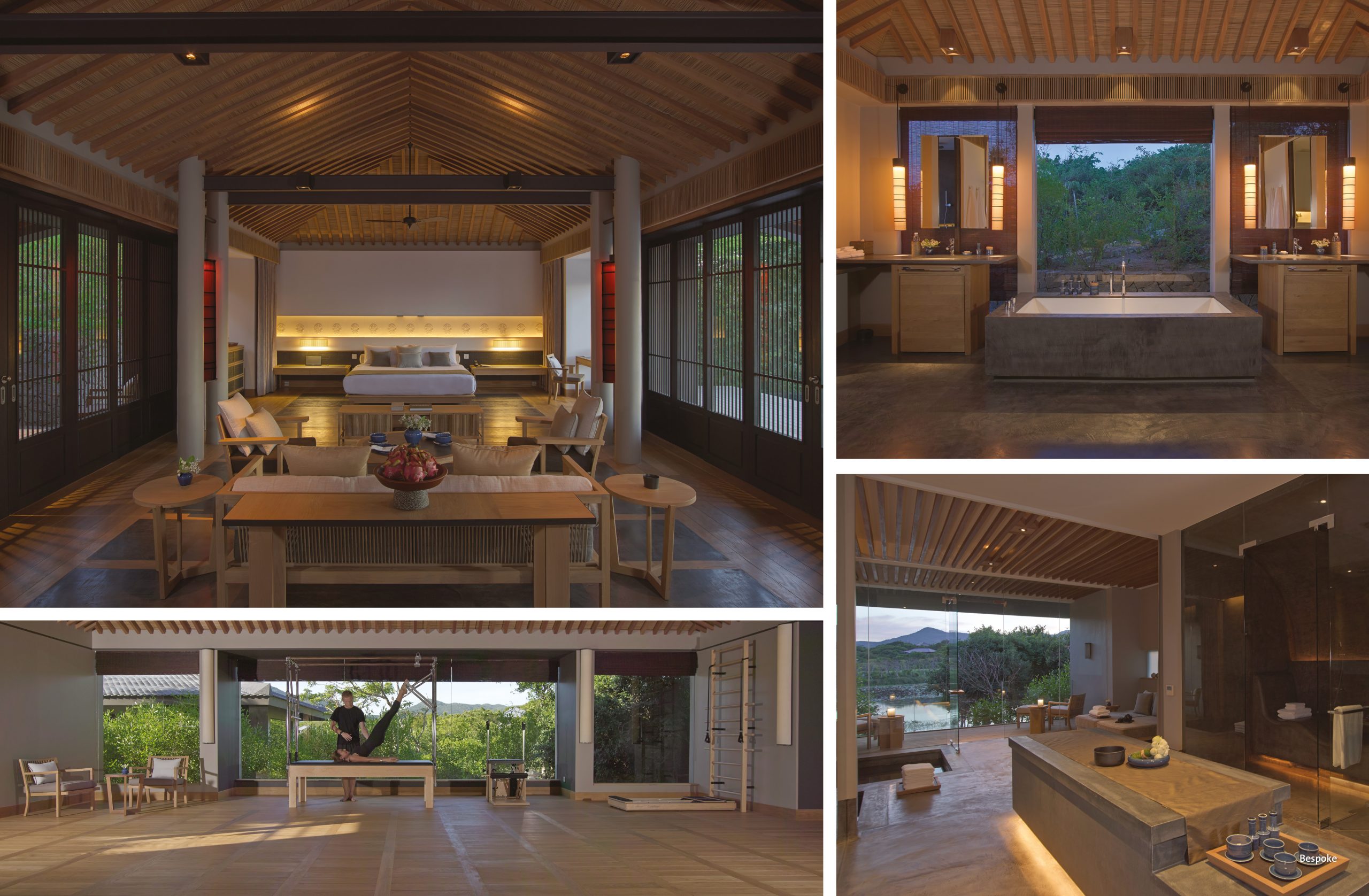 TOP LEFT: The open-plan pavilions feature a bed at one end, bathroom at the other and a beautiful seating area between. Some of the more traditional Vietnamese touches include the general layout, bamboo roofing and of course the cylindrical room lamps covered in local silks as well as the delicate plaster-cast lotus stencil embedded into the headboard. BOTTOM LEFT: Guest amenities include this excellent Pilates studio, a gym, a lakeside yoga pavilion and two outdoor tennis courts. TOP RIGHT: The pavilion bathroom. BOTTOM RIGHT: Set beside a lake, the spa has five double treatment rooms, all with double bathtubs, private dressing areas and showers, two hydrotherapy suites (as shown) as well as hand and foot therapy rooms and a hair and nail salon.

Set in deepest rural Vietnam, getting there is apparently a minor adventure at the best of times. Naturally, I timed my arrival to coincide with what can only be described as ‘not especially good’ times, just a couple of weeks after the devastating floods that accompanied last year’s Typhoon Haiyan, which did so much damage to the Philippines, in fact.

So though it is normally an hour’s drive south of the airport at Nha Trang, slowly subsiding lakes left behind by the floods, as well as missing swathes of mountain road have (temporarily) added another 45 minutes to the drive to the hotel. Not that I care. Sat in the back of the luxuriously upholstered and extremely well-suspended SUV that met me at the airport, the faint perfume of the chilled face cloth still scenting the air, I am barely aware of most of the rollercoaster nature of the ‘road’. Besides, I have plenty of scenery to keep me occupied. As the last traces of Nha Trang slip away, the open rice fields and misty, forested limestone mountains behind them are, in places, straight out of a Chinese shui-mo hua brush painting.

Still, when we finally wind into the hotel, which has been visible on a far off promontory for the last 20 minutes of the drive, looking for all the world like a fleet of dark tile curving roofs sailing on a sea of green, I am mildly relieved.

The main building, an open-sided pavilion, sits at the top of a long flight of stone stairs. Sculptures and other artworks line the way. Up at the top, there is a cocktail bar, a library and a breakfast terrace, as well as the restaurant run by executive chef, Nicola van Heemsbergen, which I later discover also serves a complimentary daily afternoon tea.

LEFT: The hotel’s secluded free-standing structures are a contemporary interpretation of Vietnamese architecture. RIGHT: There are two swimming pools – one cliffside and another at the resort’s beach club.

Check-in takes place in-room. Like the main building, the pavilions (for this is how the 31 villas are known) are airy structures. Beneath the woven bamboo-clad ceilings, seemingly held up by four impossibly slender columns, they are essentially a single open-plan bedroom/living space, separated from the roomy bathrooms by a sliding door.

One surprise, at least to anyone who already knows the Aman, is that rooms are equipped with plasma screens. Generally a no-no – the chain tends to attract those who don’t need CNN or E! on tap – it has been introduced here due to the hotel’s remote location. If this makes finding nearby entertainment somewhat arduous (a 90-minute drive, at the very least), the isolation means that for sea-facing villas anyway, the shower is able to give onto the deck and comes with sliding door, so that you can bathe and enjoy the panorama, safe in the knowledge that even to passing vessels, you will be no more than a distant, bronzed blur.

The layout of the resort adds to the sense of privacy. Each villa is located at the end of a gently winding path, itself linked to the kilometres of paving that wind up, down and around the hills. With everything, pathways included, screened by greenery, the Amanoi reveals itself slowly, in a subtle striptease.

There’s more here than ever completely meets the eye. In addition to the pavilions – sixteen of which come with their own plunging infinity pools – there are five privately-owned villas, a health club and spa on the shores of a small mountain lake, where open-air yoga and Pilates classes are held and a private beach club at the foot of the promontory. Linking all this together is a fleet of electric vehicles, which shuttle quietly along the pathways, carrying guests, staff and room service, emitting a faint whining drone as they pass.

You will see more employees than guests. Designed for a maximum of just 108, your non-Vietnamese name may not trip off every gracious staff member’s tongue but whenever your paths cross, you are guaranteed a smile and an heartfelt ‘xin chào’, the local equivalent of ‘hello’. Reply, if you feel so moved, with a ‘chào’ of your own, though a smile and a gentle inclination of the head will do too.

The Amanoi is designed with escape in mind. The pace sedate, the setting contemplative and the peace deafening. Apart from the wind, the susurration of leaves and the distant crash of wave on rock, the loudest sounds you’ll hear all day are birdsong, the chirruping of geckos and, at breakfast on the central pavillion terrace, an occasional slosh from the breathtaking black infinity pool just beneath. Not that you’ll notice. The view from here over the forest, the sea and a succession of rocky headlands, which appear to recede into purple-coloured infinity, will stop your heart.

Floating in that pool on my last evening, as the first blush of the setting sun colours the cerulean sky, I’m overcome by the unshakeable impression that the rocky outcroppings piercing the canopy of green are deliberate. They seem too perfectly placed, the work of a landscaper, celestial or otherwise. Some resemble figures. I see Kuan Yin, Buddhist goddess of compassion. A broken hand, index finger pointed skywards. A scowling gorilla. Tony the Tiger. The wind ruffles the trees. As my eyes begin to close, a pair of treeswifts chase a woodswallow playfully across the pool, swooping and wheeling. Below me, ships go out, ships come in and down in the forest, the cicadas begin to sing.