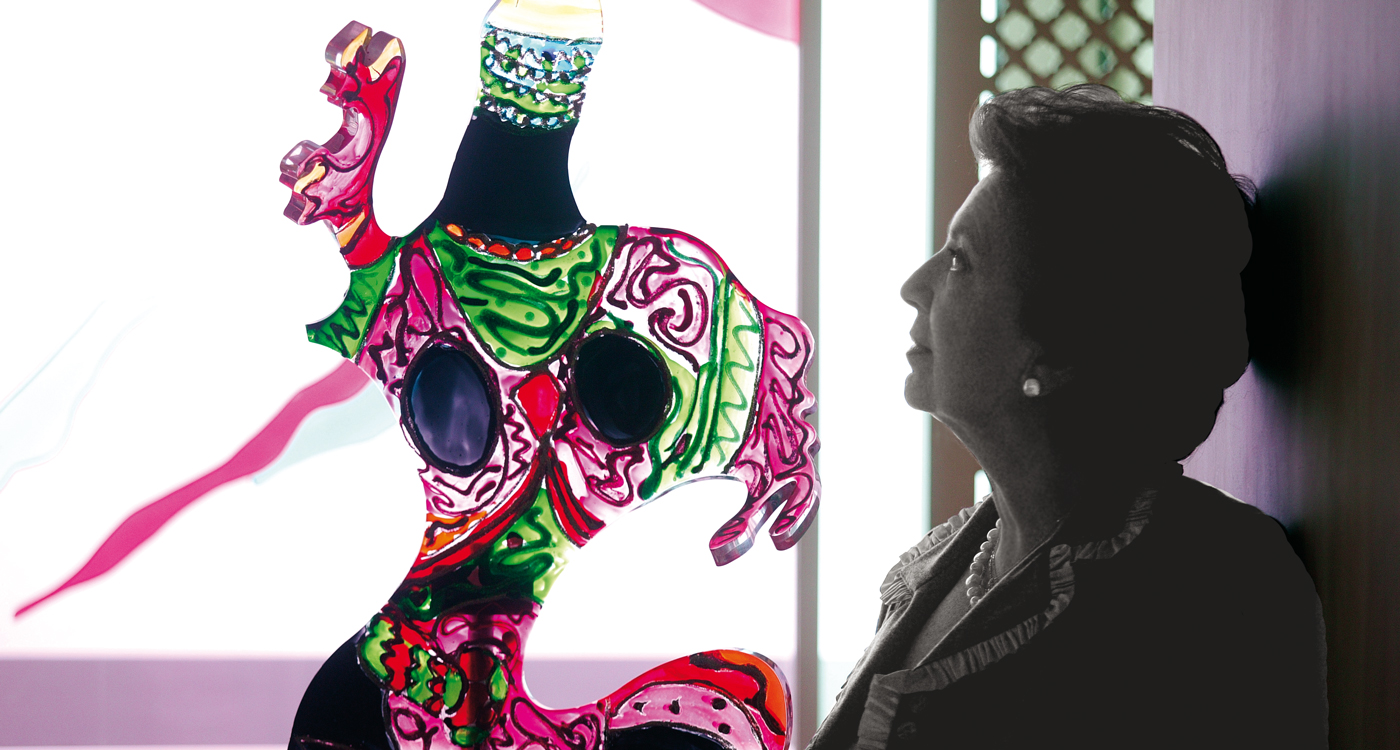 Against All the Odds the Founder of the Al Bustan Festival in Lebanon is Betting on Culture
April 11, 2007 Rana Ballout

Myrna Bustani is not a name that immediately rolls off the tongue when you think of a business leader and a patron of the arts. Much of that has
to do with her reluctance to expose herself and her accomplishments to the public. Yet, her ongoing campaign to bring a new perception of classical music to Lebanon has put her in the spotlight – once a year at least. At her gorgeous Lebanese mountain-top hotel Al Bustan, she shares her thoughts on culture, festivals and why classical music is not for funerals.

Despite her petite frame Myrna Bustani captivates you from the word go. Dressed in a wintry grey and pink ensemble, a powder pink Chanel bag elegantly falling from her shoulder, her short brown hair perfectly set, a hint of rosiness on the cheeks of her dainty face, she is all smiles and courtesy and she greets me with warm familiarity. There is something uniquely grand and strong about this woman. Her words are carefully selected and articulated. She speaks in soft deep tones and her English brogue is a charming mixture of French with a hint of Lebanese – yet managing to sound aristocratic.

Al Bustani was born into affluence thanks to her industrious and dynamic father, Emile Bustani. The MIT and AUB educated businessman had gained his fortune through C.A.T, the contracting and trading construction giant he founded in 1936. The death of the elder Bustani in a plane crash in 1963 brought with it many new responsibilities and as the only heir, Myrna had to fill her father’s shoes. She inherited his positions in various companies he owned and was elected to his seat in parliament – becoming the first woman in Lebanon to hold political power. She now unassumingly waves off, with her delicate hand, the idea that she has a flair for business and politics, putting her achievements down to a curious combination of fate and serendipity.

But just like her father, she has philanthropic blood pumping through her veins. In 1985, she established the Emile Bustani Middle East Seminar at his American alma mater, MIT, to honour his memory and pursue his devotion to higher education and peace in the region. She is also an active member of the AUB Board of Trustees.

However, her greatest calling is the struggle to revitalize and educate her sceptical countrymen about symphonies and sonatas, despite rampant economic instability, political assassinations and general unrest. The Al Bustan Festival she set up in 1994, along with friends, is the only member of the European Festival circuit and is currently in its fourteenth year of production. Despite all the odds and because she loves a challenge, Bustani has managed to make the festival one of the iconic cultural events of the Middle East. 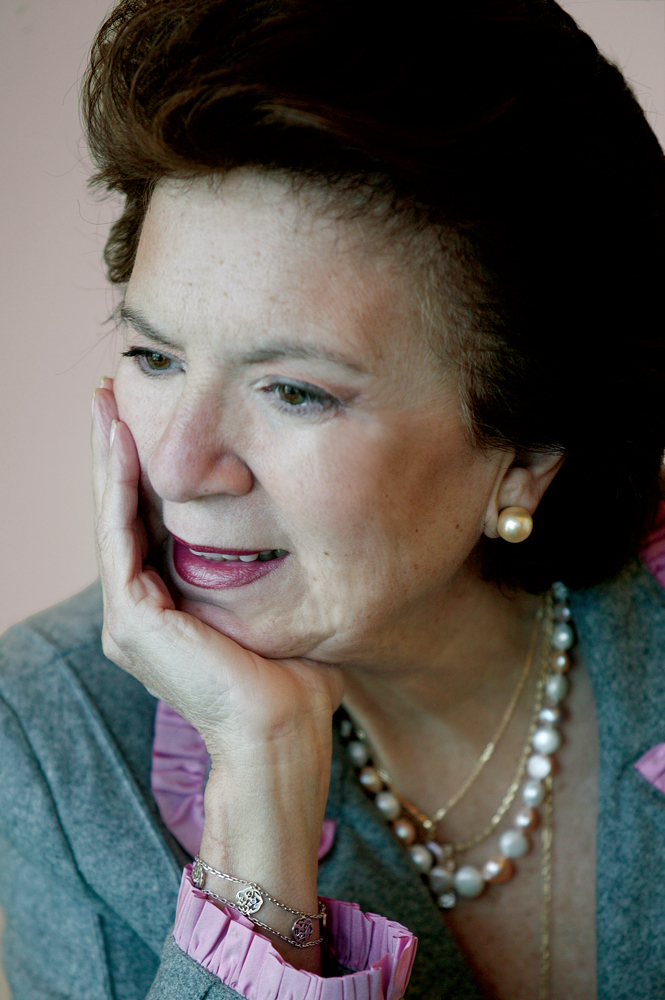 HOW WOULD YOU DEFINE CULTURE?
A Frenchman, I can’t recall who, once said, ‘Culture is what remains after you have forgotten everything’. I find that to be very true. People use the word culture in Arabic in its wrong format. Culture is not what you have read, heard or seen. Rather it is what remains after you have read, seen or heard something. You can forget the name, the dates or the words, but you never forget the poetry or the music. You don’t acquire it very fast but it is passed on through the generations.

WHO WOULD YOU SAY IS AN ARAB CULTURAL ICON?
I don’t know enough of the people that would fit this definition. Sometimes I feel that I am marginal because I would like to know more about what is happening in this domain in the Arab world. But perhaps I would say Mahmoud Darwish who is an extraordinary poet. Maybe also Umm Kalthoum. People hang on to her throughout the Arab world. She was an icon and she was talented. It is very difficult to name just one person because in the whole region you won’t find a single collective memory. There are few things which are part of our collective memory but really what is unifying is religion and that’s why people hang on to it so much. But there should be something else.

WHERE DID THE IDEA FOR THE AL BUSTAN FESTIVAL COME FROM?
It came from an idea I had with [head of the Lebanese Conservatoire] Dr. Walid Gholmieh in 1993. He had just come back from the United States. I was looking for two student musicians who would play at the hotel during tea time. Gholmieh and I had lunch and he started telling me about what happened to the Conservatoire during the war. Pianos were thrown out of the windows; scores were burned and so on. I was appalled to the point I had tears in my eyes. It was unbelievable what he was telling me. But then an idea started germinating in my mind and I asked people who I knew organized concerts in London if they thought it was a good idea for us to use the hall at the hotel which was unused in winter. I talked to a lot of people and we finally formed a committee and that’s how it started.

WHY ARE PEOPLE SCARED OF CLASSICAL MUSIC AND HIGH ART?
They are scared because it moves them despite themselves and they don’t like being moved. What music does have is a cathartic effect on emotions that are already there. Ultimately, music is therapy and it does a lot of good. Unlike the theatre which is based on the visual, music is abstract. I think classical music is catching on. Now it’s even easier to listen to. I have all of Mozart’s works on my iPod. I love it because I can choose any sonata and listen to it, it’s a great facility.

THE FESTIVAL IS NOW IN ITS FOURTEENTH YEAR; HAS IT BEEN DIFFICULT TO CHANGE PEOPLE’S PERCEPTIONS?
We had to start from below scratch. The perceptions of classical music were all wrong. Journalists would often ask me why we were putting on a festival of funerary music. This is because after 17 years of civil war and whenever anyone important was killed, programmes would be interrupted by classical music as a sign of mourning which was actually called ‘funerary music’ on air. And so we had to drastically change matters. I was determined for my country not to be a place where classical music was going to be called funerary music. It was certainly a challenge to change perceptions but I think that we succeeded.

HOW DO YOU SELECT YOUR ACTS AND IS IT DIFFICULT BRINGING THEM OVER?
Well, I can tell you that this year it’s been very difficult bringing them over. Even more difficult than the first year. But the music world is very small and once you open a festival you become known in these circles so artists contact us more often than we contact them. We got so many requests even when the bombs were falling in July [2006], as artists were still interested in coming to Lebanon for the festival. That’s a success but it could also mean that a lot of musicians are out of work [laughs].

HOW DIFFICULT IS IT TO PUT ON A FESTIVAL AND TO KEEP IT GOING, ESPECIALLY IN THE DAYS OF THE POP EXTRAVAGANZAS?
It’s not that difficult. What other festivals do is actually much more difficult. We, for instance, have our own indoor hall so you’re not interrupted by outside noise. At least we have closed acoustics. We also don’t have big shows like the Beiteddine or Baalbeck festivals do, simply because it’s not financially feasible for us and because our stage is too small. We find it more difficult to break even financially because we only have 450 seats and don’t have the space to add more. Another difficulty we’ve had is the current instability in the country. We are really taking a risk every year.

AND WHAT KEEPS YOU GOING?
We have to keep going. So many people are doing wonderful things in this country and we have to continue working for the country.

WHO WOULD BE ON YOU DREAM TICKET?
Difficult to say. Probably [tenor] Placido Domingo but that’s a real dream. At the end of the day, I have to be practical. He would be too expensive. We also try to find new artists whose stars are rising.

WHICH COMPOSER MOST CAPTIVATES YOU?
It really depends on my mood and the country I am in. But if I had to choose one, it would be Beethoven even though I really also love Wagner’s works. I read that some of the greatest pieces that Beethoven wrote were because, being completely deaf, he was listening to the music inside him. It’s pure emotion.

HAVE YOU EVER THOUGHT OF TAKING THE FESTIVAL OUTSIDE OF LEBANON?
No, I did this for Lebanon. The festival was created and set up for the Lebanese so that they have the opportunity to listen to good music and good artists. There was a lack of it and a need for it, so we did it. The festival in Lebanon is made for my countrymen and not for expatriates and that is where the difference lies.

WHAT IS THE MOST IMPORTANT LESSON YOU HAVE LEARNED?
There is nothing more important than life. The priority in life is to be as reconciled with yourself as much as possible, which is not easy.

HOW WOULD YOU DEFINE LUXURY?
Luxury is freedom… can you imagine that?

ONE PHRASE TO DESCRIBE THE FESTIVAL WOULD BE…
Twenty days of happiness.