People | Design | SOMA Architects Create a Stunning, Modern, Glass Home on the Edge of the Mediterranean in Lebanon 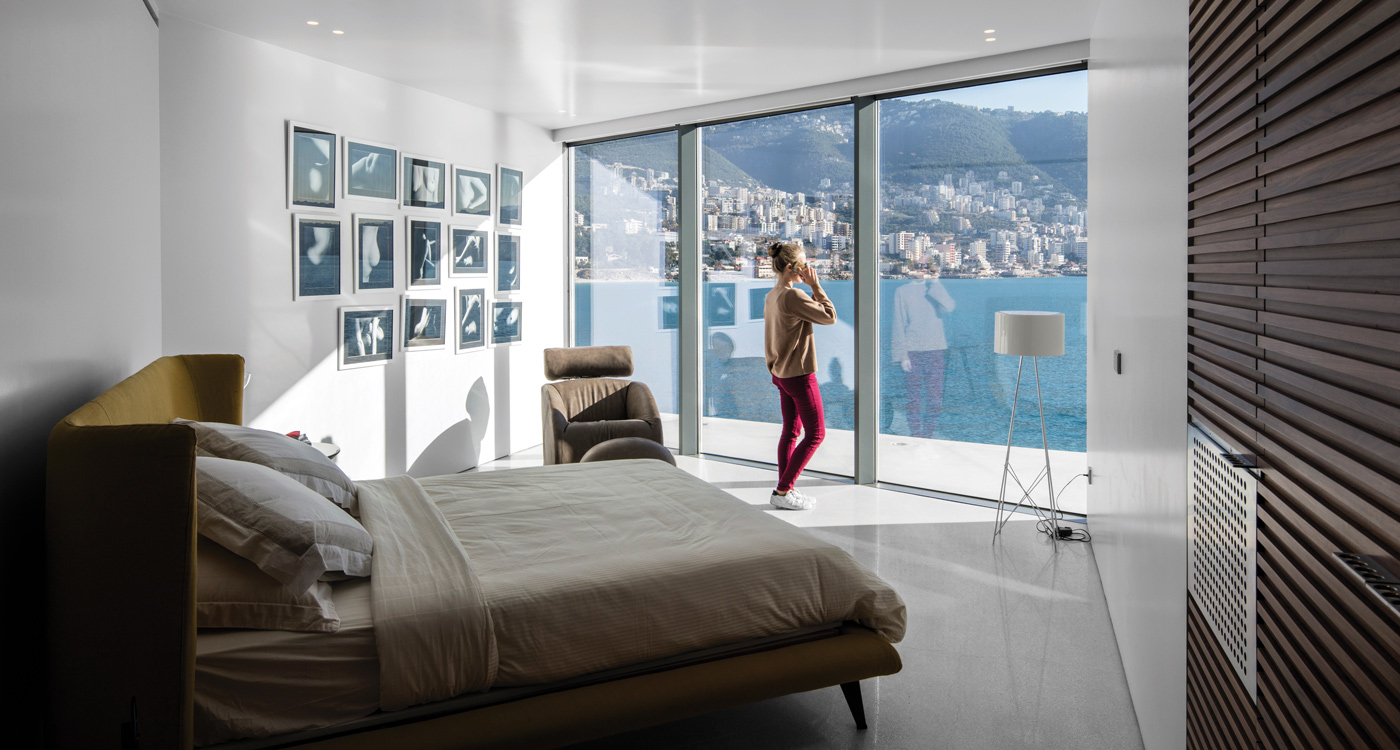 SOMA Architects Create a Stunning, Modern, Glass Home on the Edge of the Mediterranean in Lebanon
January 31, 2020 admin

Few homes in Lebanon are as distinctive as Calypso House. Designed by Michel Abboud, founding principal of SOMA Architects, Calypso House is located in the bay of Jounieh, right below the Casino du Liban. That special setting, over the Mediterranean and on Lebanon’s most beautiful bay, defines the design essence of the home. “The house is built on water, not on land,” says Abboud, “directly over the Mediterranean and literally floating over the shore. A steel structure anchors the house so it doesn’t detach and float away.” 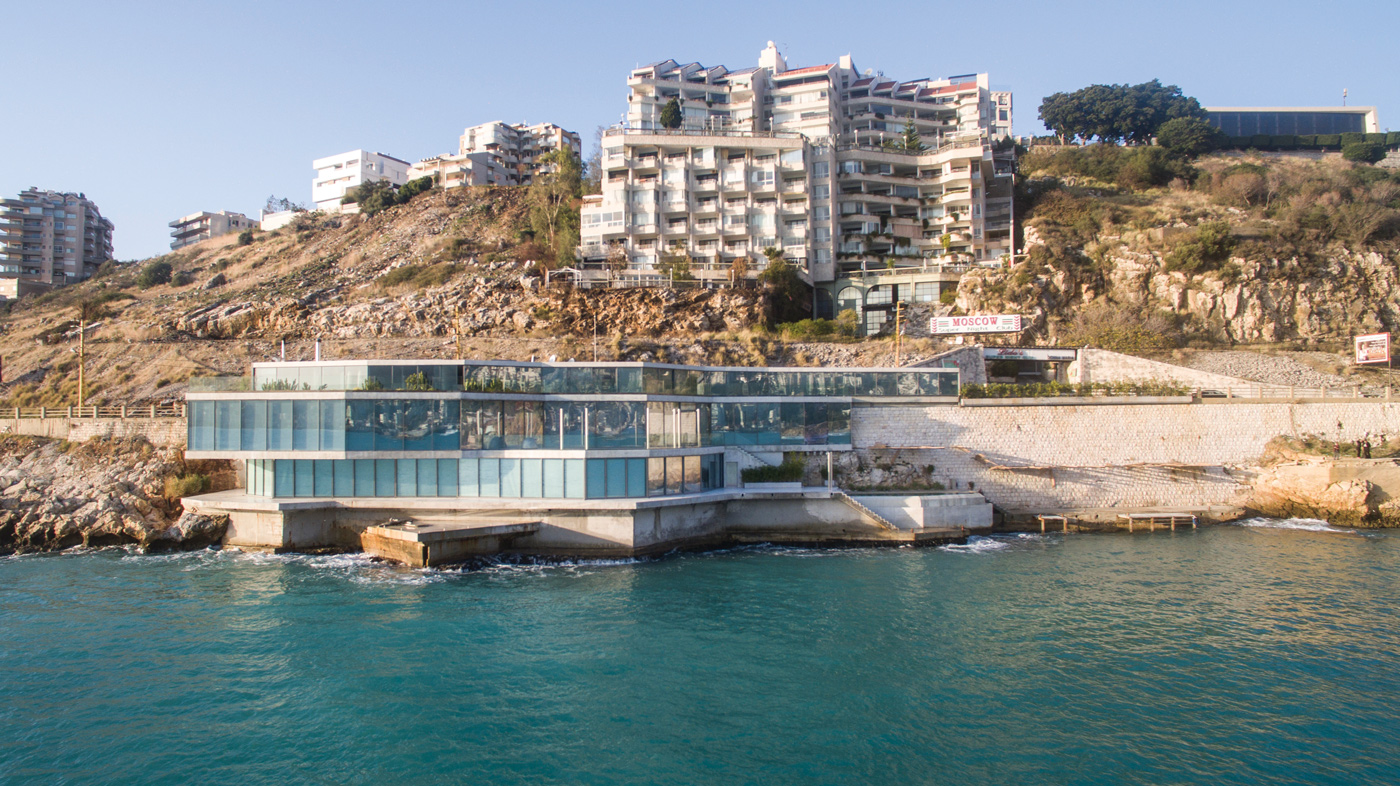 The house features 65 linear metres of Vitrocsa glass with a custom designed reinforced profile system that provides the required rigidity, air and water tightness and a lamination that can withstand wave pressure of up to 40 tonnes per sqm.

With a façade that’s made entirely of glass and mimicking the shape of the adjoining landscape, Calypso House is a sleek structure that appears to have emerged from the water and clung onto the rocks behind it. “We wanted to take full advantage of the pieds dans l’eau positioning,” says Abboud. “The idea was to have no obstructions of any kind, so you feel you’re in the water from wherever you are.”

While living on the seashore is magnificent, building a home that would withstand six-metre waves was a great challenge. “The façade is attacked by waves that explode on the glass,” says Abboud, “so we engineered a system of laminated glass with special structural films – the first wave-proof glass assembly created in the world. And we’ve had no breakage or leakage since the house was completed in 2016. Even the colour of the glass was minutely selected to match the colour of the sea.” 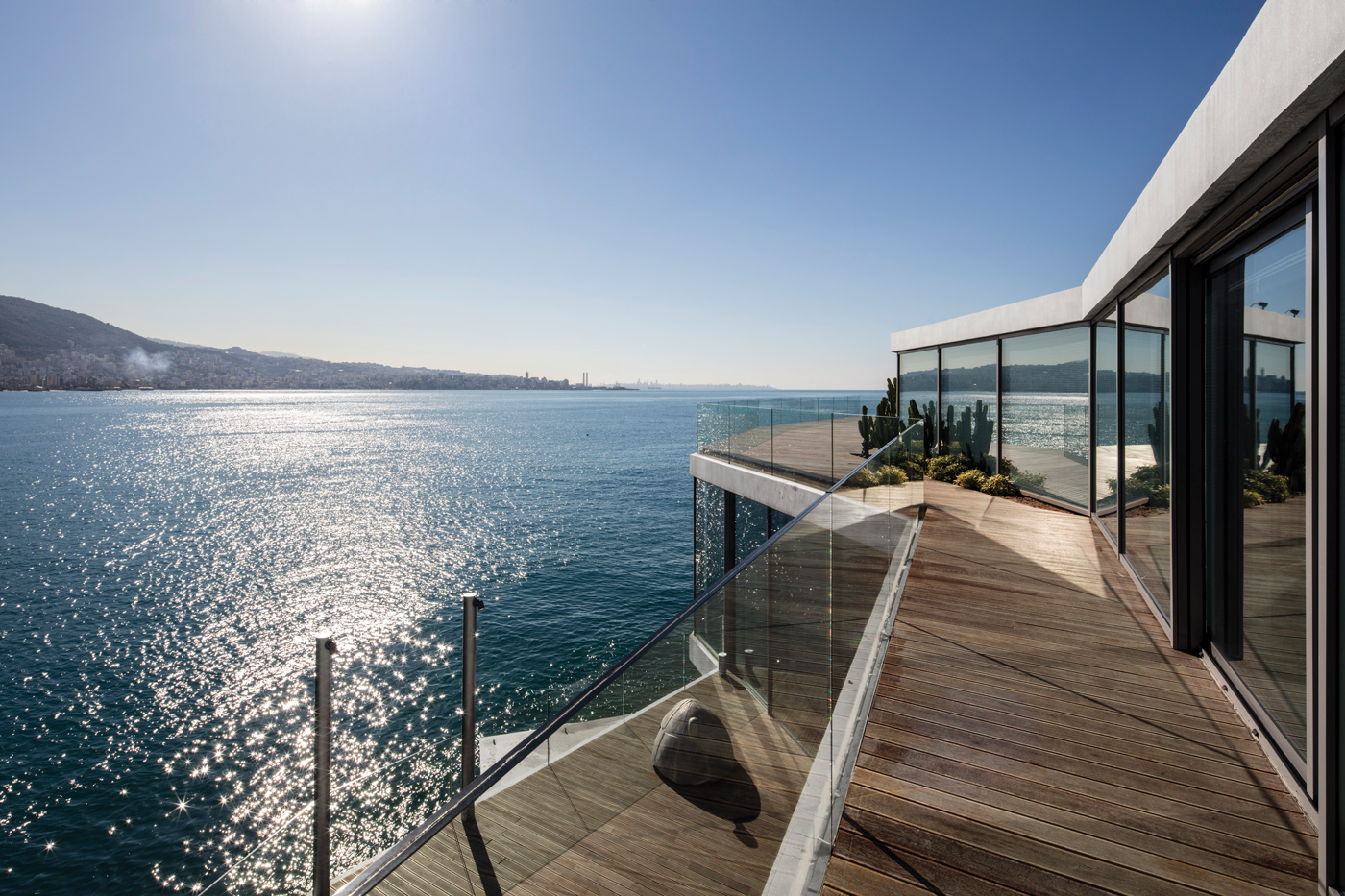 Calypso House covers 1,000 square metres of built up area over three levels, with the top level accessible by car, meaning residents enter the home from the roof on which the covered parking garage is located. There’s also a seafront deck on the same level. A staircase connects the roof to the second level (the middle level), which houses the open-plan living room, kitchen and guest bath. Glass doors slide open onto a splendid terrace overlooking the Mediterranean. “The living room’s ceiling is an inverted shell made out of wood like the hull of a boat,” says Abboud. “It’s a complex triangulated surface, a parametric ceiling made out of horizontal wooden fins.” The living room also boasts a seven-metre-long letterbox, wood-burning fireplace upon its wall. The third and bottom level houses six bedrooms – each with its own bathroom – plus a family room whose glass doors open onto a concrete, sea level terrace that ends with an infinity pool.

ABOVE: Though the exterior was done exclusively by SOMA Architects, the interior of Calypso was designed by Nabil Dada & Associates. Together the two firms helped the home garner a World Architecture Design Award in 2019.

Like other SOMA projects, Calypso House has received its share of acclaim, including the World Architecture & Design Award in the residential category for 2019. In fact, the house shares some common traits with other SOMA designs, including the firm’s second beach house in Batroun, on the northern Lebanese coast. “The house had a similar typology,” says Abboud. “One big open space directly on the water with a purely glazed façade.”

Outside Lebanon, SOMA Architects’ One at Palm in Dubai is a massive residential structure that has redefined luxury living in the Emirate. “Like Calypso House, One at Palm pushed the boundary of structural design and proposed new typologies for residential living.” And with New York’s 45 Park Place, Abboud reinvented the loft lifestyle: “I took the typology of the Tribeca loft and converted it into a modern residential building, revisiting it for the 21st century.”

What’s in store for SOMA Architects in the near future? Abboud says he’s working on a 120-million USD home in Beverly Hills that covers 3,500 square metres. “It’s an exploded house and the most exciting residential project I’m working on.” By the sound of it, the Beverly Hills home is slated to become a winner, much like Calypso House and other projects penned by SOMA Architects. 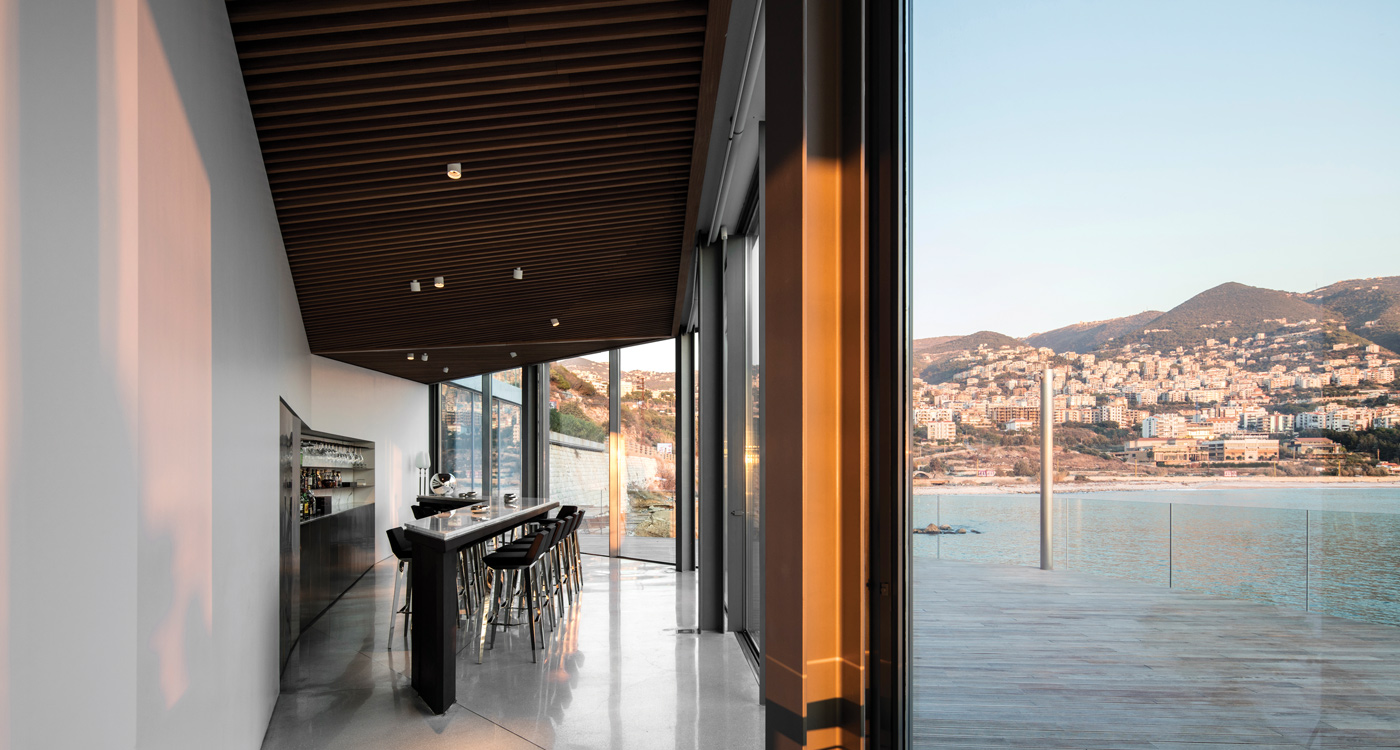