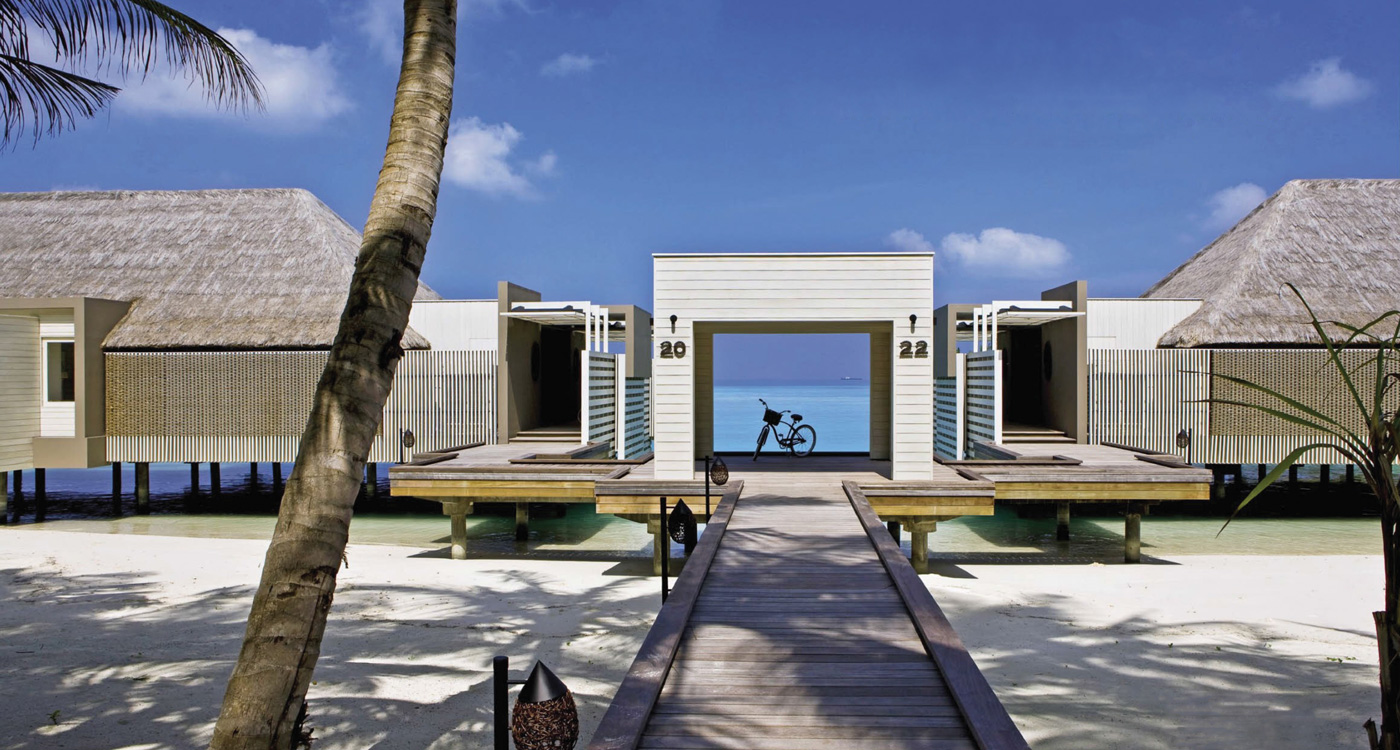 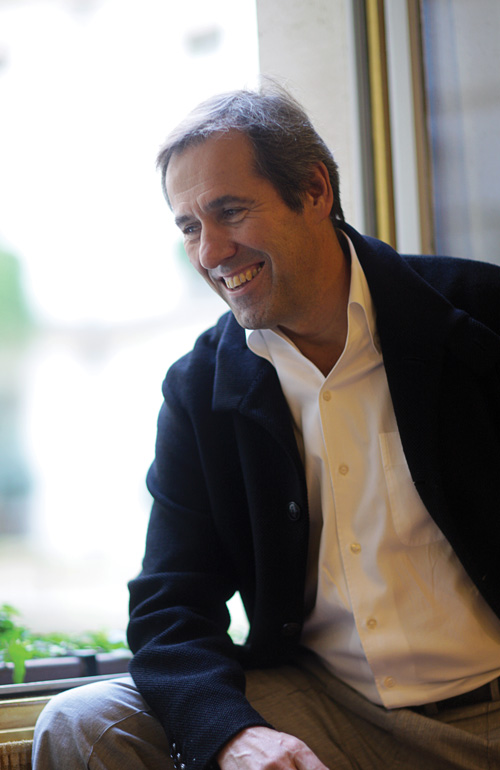 The hotels Jean-Michel Gathy designs for the likes of Aman, One&Only and Cheval Blanc are off the decadence Richter scale. It’s therefore about time we meet the man who pioneered the private plunge pool, ‘naughty bathrooms’ and basking nets.

The name Jean-Michel Gathy may not feature in the panoply of today’s stellar architects but no one else has had so far-reaching an influence on what constitutes a 21st century hotel of the first rank. Since the opening in 1993 of the first of his designs to be built, Amanresorts’ Amanwana on the Indonesian island of Moyo, he has created hotels across the world, from the Viceroy in Colorado to the Hotel Bora Bora in French Polynesia, operated by many of the top-tier hospitality brands, such as Banyan Tree, GHM, Jumeirah, Park Hyatt and Shangri-La.

When you get the chance to speak with Gathy, you’ll soon learn that he hasn’t actually kept a tally of the hotels his Kuala Lumpur-based practice, Denniston International Architects, has designed but nine have opened last year alone, amongst them the Amans in Venice and Vietnam, LVMH’s Cheval Blanc Randheli in the Maldives, Como Resorts’ Point Yamu in Phuket, The Chedi in Andermatt, Nizuc on Mexico’s Yucatan Peninsula. Only one is likely to open this year – the Park Hyatt in the Chinese resort of Sanya on Hainan Island, though six or seven should be ready for guests by 2016.

“No one you will ever meet has designed nine hotels that opened in a single year,” Gathy tells me. Reticence is not one of his defining characteristics. “Because we are so specialised in top luxury hotels, we always get the good ones. In that respect, I am the spoiled kid in this industry. Every time a nice project comes up, it’s for us or at least, we get invited.”

That he is so prolific is partly down to a tireless work ethic. When we meet in London, he has flown in that morning from Singapore, where he has an office and is leaving the next day to see a client about a project in the Exumas, the most idyllic part of the Bahamas. Gathy also has a profound and pragmatic understanding of how hotels function and what wealthy, discerning guests expect. “We’re not just architects,” he continues. “We’re lifestyle product designers. Design is also about daring and challenging rules. I know what people like, what people talk about. It’s actually more important to please the heart than the eye. A lot of architects and designers forget this.”

“I TRY TO REFER TO LOCAL CULTURE BUT NOT TO ICONS. IT’S NOT JUST ABOUT AESTHETICS, I LIKE HOTELS THAT HAVE A SOUL.”

Certainly, Gathy has long been an innovator and a trendsetter. Without him, reflecting pools might never have become a key component of late 20th century tropical resort design. Nor, for that matter, Buddha sculptures as decorative objects and the current fashion for firelight might‘ve never taken off, which he used in The Chedi in Muscat back in 2003 and again last winter at its recently opened sister hotel in the Swiss Alps. Then there’s overwater hammocks, or ‘basking nets’, which he dreamt up for the One&Only Reethi Rah in the Maldives in 2005 and immense spa-like bathrooms with freestanding tubs and places to sit and recline. Naughty bathrooms, he calls them. 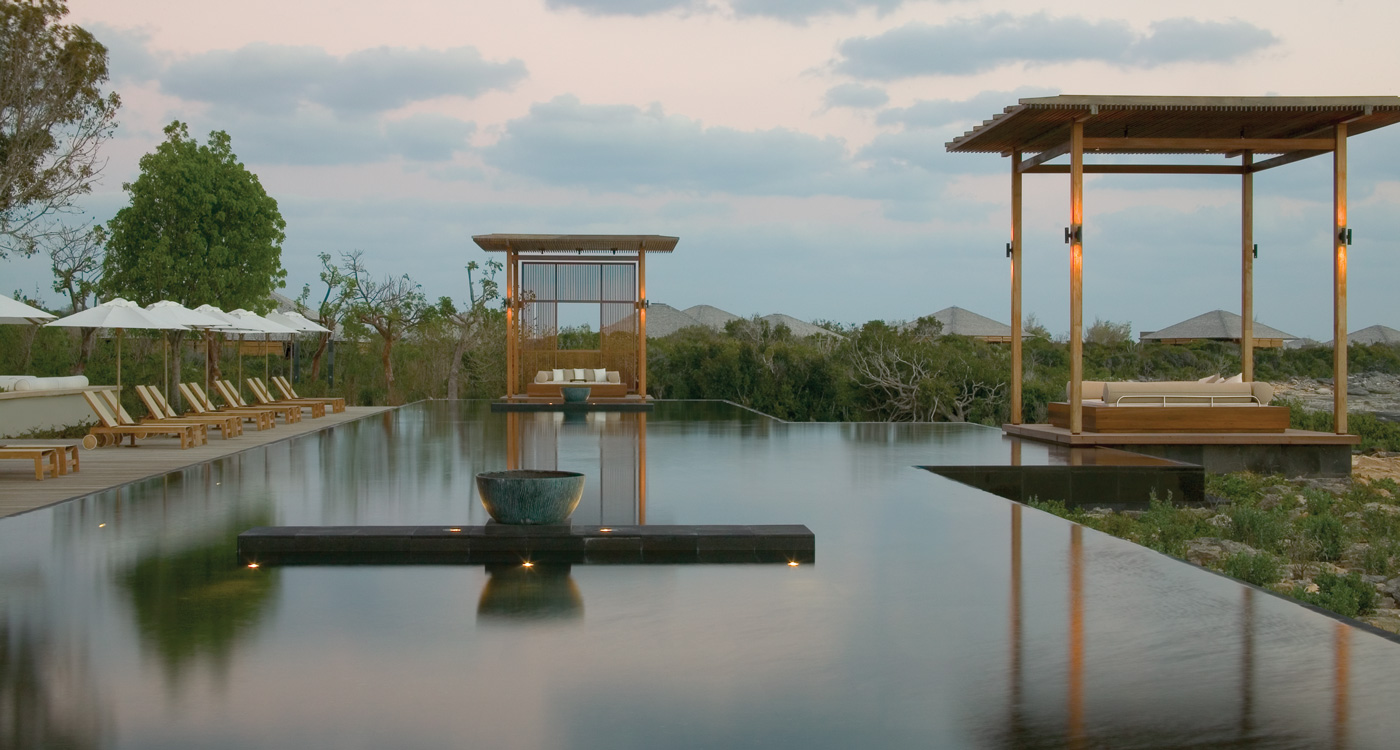 With its dramatic black volcanic rock infinity pool, the Amanyara in Turks & Caicos is a testament to Gathy’s ability to combine two contrasting worlds; sleek Asian design and the natural rugged beauty of one of the Caribbean’s least developed islands.

He pioneered the vogue for private plunge pools and show-stopping swimming pools – witness the pool at the St.Regis Lhasa, lined in glazed gold plate, the black volcanic rock pool at Amanyara in Turks & Caicos, the three parallel 30-metre pools at The Setai, Miami or the 150-metre long curved infinity pool that balances on the roofs of the three towers of the Singapore’s Marina Bay Sands.

Gathy reckons there are three key components to luxury: the freedom to do exactly what you want, privacy and space – hence his propensity for soaring ceilings, long vistas and the ever-increasing size of rooms. Two decades ago, the standalone tents he conceived at Amanwana were a then-decadent 58 square metres. He raised the bar at Reethi Rah with villas of 72 square metres and then blew that out of the water with Cheval Blanc’s Randheli, whose 45 villas each measure 130 square metres.

Size matters to Gathy, which is why he is thrilled to be designing three Amanresorts in Gabon – a property in the capital Libreville (“for when you fly in”), a resort on the coast and a tented camp in the Loango National Park, on what he calls “the hippo beach, the only place in the world where hippos surf.” 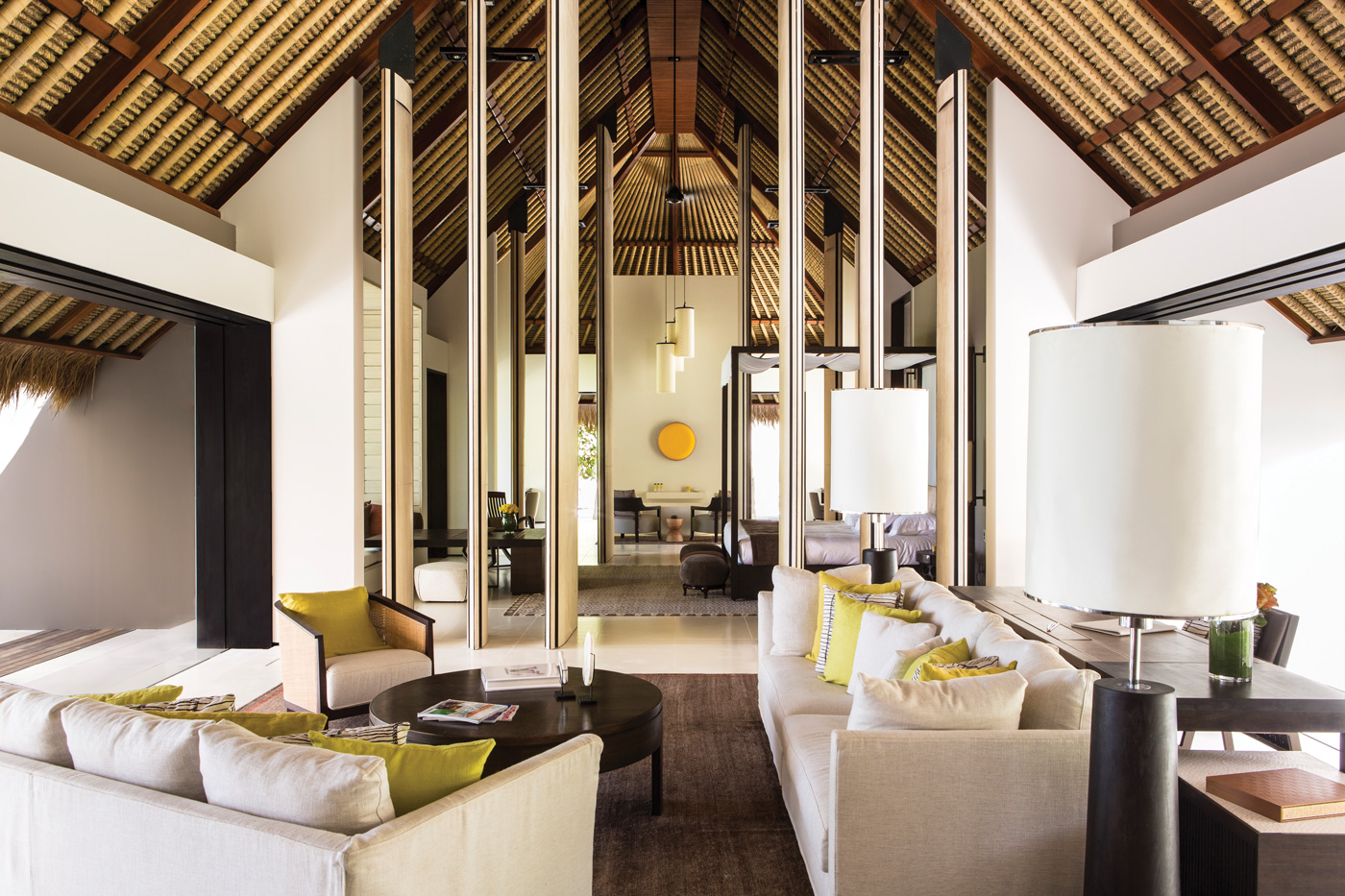 The Cheval Blanc Randheli attracts clients who don’t want to see or be seen. Large glass doors, on both sides, open each villa to the outside but it’s the sheer volume of everything that creates the real wow factor. A blend of textures and materials both from the area and beyond – such as teak, rattan, bamboo, leather, bronze, thatch, coconut and shell – are enhanced by a vivid palette of colours; white, taupe and oyster grey with splashes of pop yellow and green.

Elsewhere in Africa, he has also designed the forthcoming Cheval Blanc hotel in Aswan, idyllically located on an islet in the Nile, when Bernard Arnault (chairman and CEO of LVMH, which owns the Cheval Blanc hotel management company) saw it, Gathy says he exclaimed “It’s marvellous what you’ve done. I love it!”

If there’s a single quality that raises Gathy’s architecture above the rest, it’s that his work tends to speak of its location through the materials and decorative references used. “I try to refer to local culture but not to icons of that culture. It’s not just about aesthetics, it’s more subtle, more human, more charismatic. I like hotels that have a soul.”

In the understated interiors at Aman Canal Grande, which opened in the 16th century Palazzo Papadopoli in Venice last summer, he opted for cool minimalist furniture from B&B Italia that doesn’t compete with the lavish original décor of the Renaissance palazzo. Nevertheless, the muted silk damasks on the walls are Rubelli, the glass is hand-blown Murano and the paintings belong to the current generation of the palazzo’s owners, who live upstairs.

From the shingled shallow-pitched pavilion roofs at Amanyara in the Turks & Caicos to the Slavonian oak furniture at Aman Sveti Stefan and the tree-filled courtyards in Beijing’s Aman at Summer Palace, his hotels leave you in no doubt as to where you are.

By now, it should be clear that Gathy works a lot for Aman, whose hotels are in many people’s eyes the ne-plus-ultra of sophisticated sequestered resorts. It was Aman’s founder, Adrian Zecha, who first built one of his designs and now he’s designed six Aman resorts out of 27 and is currently working on properties in Rio de Janeiro and Portugal’s Herdade de Comporta, as well as in Gabon. 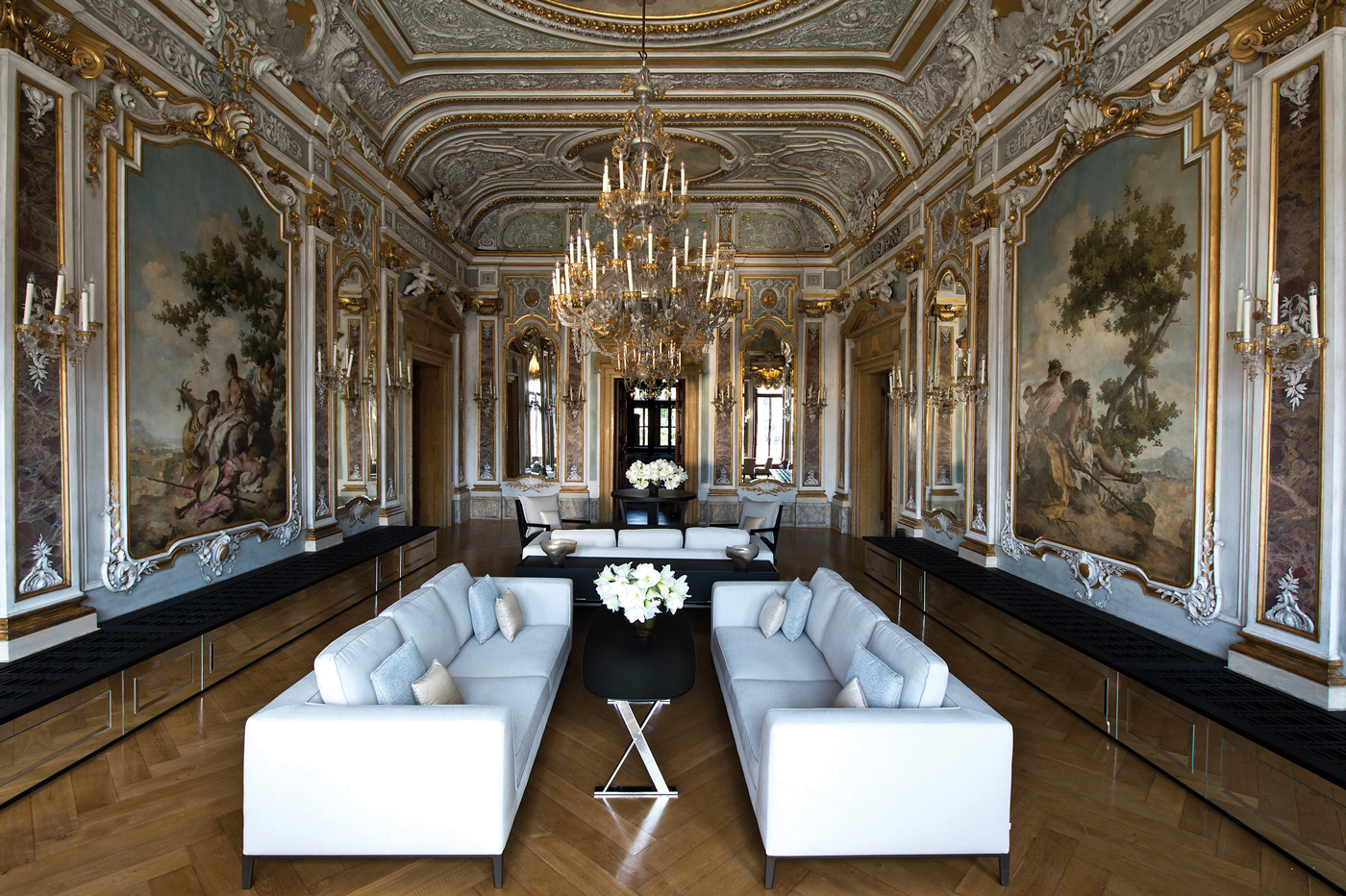 Gathy decided not to try and compete with the splendour of the frescoes, pier glasses and swathes of gilded putti at the Aman Canal Grande, which is one of just eight palazzi monumentali in Venice.

Zecha had been shown some plans Gathy had drawn up for Sonu Shivdasani, the founder of Six Senses and Soneva resorts, who was planning his first hotel in the Maldives. Gathy’s design was never actually realised but it did get him through Zecha’s doors.

That was in 1989 and Zecha had just started Aman the year before. “So I went to see him and he said, ‘Jean-Michel, I want to work with you. I have a project for you. Nobody else wants to do it. So it’s yours.’ And so he just appointed me to design Amanwana.” A barefoot luxury wilderness of 20 ‘tents’, with teak and coral stone podiums and large overhanging canvas canopies, it’s a place Gathy still regularly visits.

Holidays are important to Gathy, especially safaris, and one of the perks of the job. He regularly visits Singita in South Africa’s Kruger Park, for which he designed the masterplan on a barter basis. “Our fees were too big for a project like that, so I said you can take my drawings, have someone else finish [the project], but I want to stay at Singita for the rest of my life for free. I’ve already been four times.”

His favourite country in Africa, however, is Botswana. “This year, I was at Zarafa. It is almost 49,000 hectares and has just four tents. Everyone has their own jeep and guide.” He also loves New Zealand. “It’s one of the most beautiful countries. They have so much space, and the hotels are always in sites you can’t believe. Huka Lodge is the best hotel in the world.”

For what is life without a little R&R, without passions beyond one’s work? He tells the story of a project in China he didn’t want to take on. The client was insistent and quizzed Gathy’s then secretary about his weaknesses. “You can’t buy him,” she said, eventually divulging that her employer loved wine, especially Cabernet Sauvignon and particularly a 1982 Mouton-Rothschild Bordeaux. Gathy was finally prevailed upon to take the meeting and on the table were six bottles of the vintage. The deal was signed and though Gathy refuses to identify the project – “I still hate the location” – it is being built.

An Ode to Tripoli As It Was: When There Was Romance and Beauty in the Libyan Country Life