People | Business | The Real Love Story Behind the Rug Company 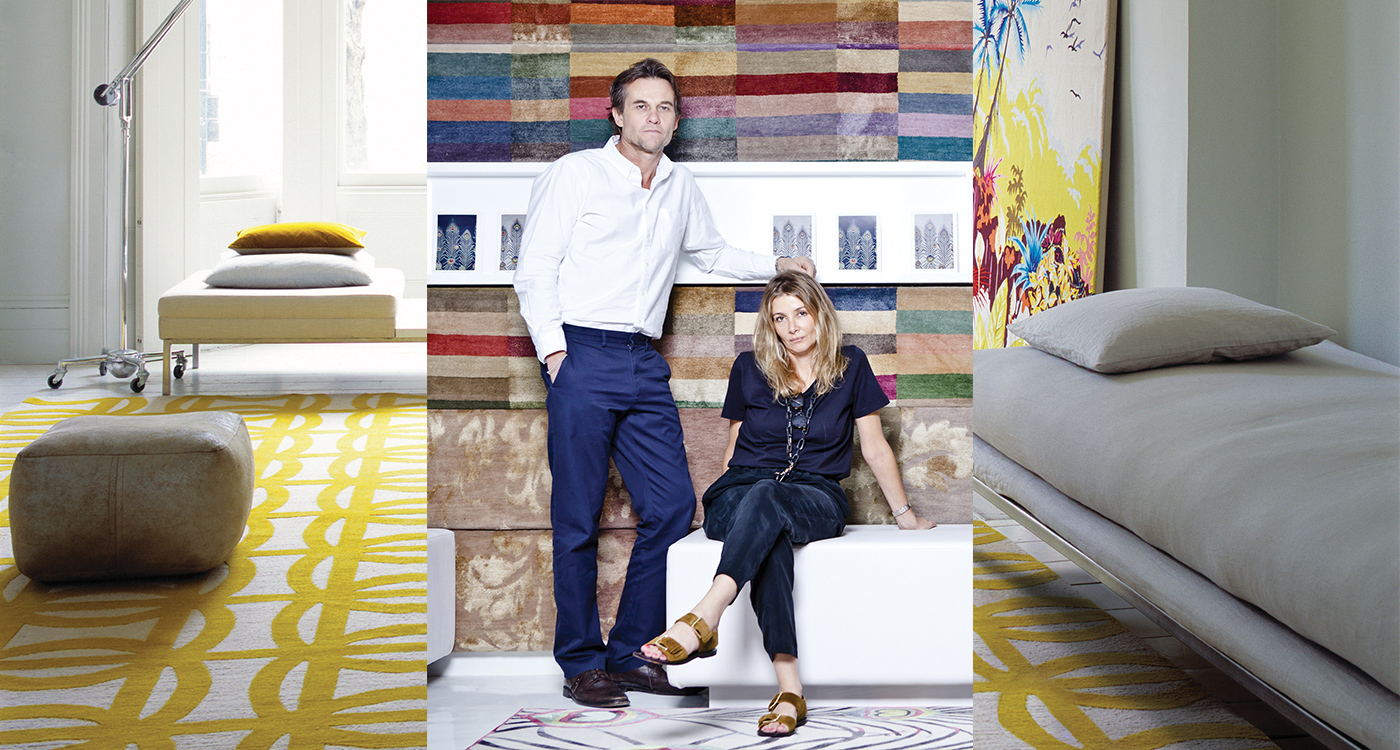 The Real Love Story Behind the Rug Company
June 5, 2015 admin

Collaborating with such designers as Paul Smith, Vivienne Westwood and Alexander McQueen, The Rug Company, spearheaded by Suzanne and Christopher Sharp, do not make modern rugs per se. Rather, they make beautifully handmade traditional ones that embrace a contemporary aesthetic.

It isn’t every day that I get to interview a husband and wife team, so when I’m given the opportunity to speak to the founders of The Rug Company, I’m not sure what’s in store. I certainly wasn’t expecting that, in addition to learning about their rugs, I’d be privy to a charming story of how two people fell for each other.

We meet on the light-filled top floor of a beautifully renovated 19th century Beiruti villa that was converted into the Lebanese restaurant Liza. Think arcades, filigreed window partitions, patterned tiles and elaborate wallpaper that ranges from the country’s old currency to collages of buildings and banana leaves.

“She embraced the space quite bravely,” says Suzanne Sharp, The Rug Company’s Creative Director, referring to interior designer Maria Ousseimi, though she could just as easily have been speaking of the owner, Liza Asseily, for whom this is the second Liza restaurant after her first in Paris. Either way, The Rug Company’s wares look stunning here, hung on the walls like artworks. Most striking is the Climbing Leopard, an emerald green rug designed by Diane von Fürstenberg that features a leopard clawing its way upward. Made from hand knotted silk, it took eight months to make. 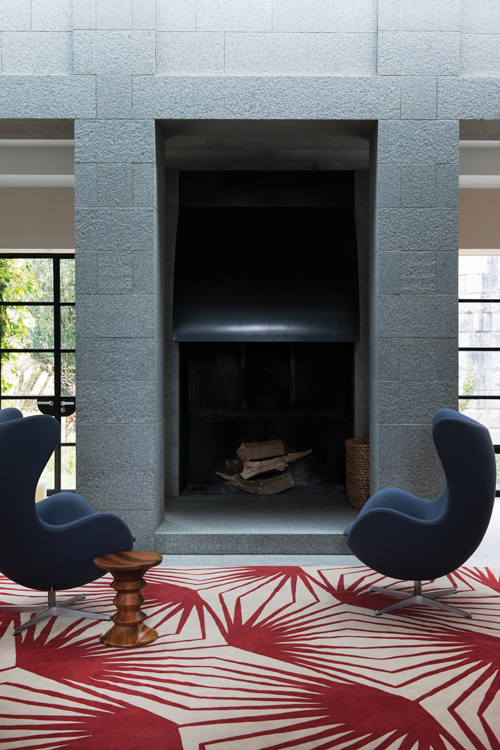 ’Stingray Red’ was designed by the interior design Alexandra Champalimaud.

After exchanging pleasantries, Christopher Sharp, co-founder, CEO, and Suzanne’s life partner, joins us at the table. I ask how it all began. “When we met, I was doing up houses as a decorator,” Suzanne begins, “and Chris was a film editor.”

“We actually met on the train,” Christopher chimes in, “we would get on the same stop, we’d see each other but we never spoke.”

“We would check each other out,” Suzanne adds cheekily. “It was if we had a relationship,” she pauses, “but not a speaking one. It was under the veil, very romantic in a way.”

“Like how you are aware of the other person,” says Christopher.

“But you aren’t sure if they’re aware of you,” continues Suzanne.

“One day, I was invited to a party and Suzanne opened the door.”

“We flirted but we got to know one another first.”

“We were pretty cautious, because we did meet on the tube after all.”

I watch the attractive couple’s smooth exchange, admiring their synergy as they casually complete one another’s sentences. It’s clear, to me at least, that they’re still in love.

“I was working in television at the time, mostly commercials and documentaries,” Christopher says. “One day, we were approached for a job in Saudi through our Lebanese fixer, Tony, to set up a studio there. The backer was Sheikh Waleed Al-Ibrahim. This turned into the very beginning of MBC.”

Interestingly enough, it was during the four years the couple spent in Saudi Arabia that their passion for rugs of all kinds was fostered. “We were in our mid-20’s, there wasn’t much to do for entertainment,” Suzanne explains, “so in the evenings, we would go to the souks – we just stumbled upon them – where the Afghanis, Iranians and Turks were. We sat down with them and got to know them, we knew nothing about these places. And we started collecting.”

“It was our mutual passion,” says Christopher.

“It was where we could go and Chris wouldn’t check his phone messages. But seriously, you know it isn’t just the Bedouins who have their walls wrapped in tapestry, dividing and covering things. Since the 18th century, rugs have served as decorative wall paintings, it’s fascinating,” Suzanne continues.

The Sharps’ rugs today are made just as those ancient models might have been, with 2,000 highly skilled weavers in Nepal, using age-old methods passed down from generation to generation. “We found a manufacturer in Nepal, whose mother was a master weaver,” Suzanne explains, “other places, like Thailand, don’t have this ancient weaving tradition – their rugs are tufted, machine-made.” I ask why they decided to move in this direction. Suzanne responds that it’s because they believe they’re part of a larger historical narrative. “If you look at Ziegler and Ushak rugs for instance, they haven’t changed over time. Craft is very important to us, we wanted to make these rugs in the same way as thousands of years ago,” Christopher says. And they also chose to work with Tibetan wool, which comes from sheep living at high altitudes, because they believe it is the best, especially since it’s rich in lanolin and naturally oily. “Most people buy leftover wool and bleach it different colours,” Suzanne continues, “which weakens the texture, like hair when it’s dyed. But Tibetan wool has a natural protective barrier, if you drop water on it, it won’t get in. And we wanted to be purists. No short cuts. We wanted to have looms of this hand-spun wool in our shop, to show people how well they were made but also have a design element.”

THESE ARE BIG DESIGNERS WHO WANT TO LEAVE A LEGACY BEHIND, THEY WOULDN’T DO IT WITH US IF THE RUGS WERE POORLY MADE.

That’s exactly what they did. Though not right away – after they left Saudi, their next stop was Malta (for another six years), where they opened a second hand furniture shop and started a trade newspaper. Suzanne is Maltese and her parents live there. “We went one Christmas to visit them and thought, why don’t we hang out here for a while?” Chris jokes good-naturedly.

When it was time to return to London (to expand their children’s outlook, they say), they established The Rug Company – this was in 1997. Although initially, they sold traditional-looking handmade rugs, they quickly realised something was missing. This missing factor was a modern aesthetic, which began with Suzanne’s penchant for designs that have symmetry, pattern and balance.

“Rugs structure a room, they are good for defining spaces and order is part of my narrative. But at the same time, we don’t want to repeat ourselves,” Suzanne says. Which is why in 2000, they decided to create the Designer collection. “It was the idea of 10 leading designers” – now, their roster includes almost 50. “At the time, Lucinda Chambers, who was the fashion director of British Vogue, introduced us to Marni [the Italian label].”
“But there was no grand plan, I met Paul Smith, for example, while shopping in his store,” Christopher recounts, “he was the first well-known designer to work for us.”
“The more famous the designers are, the more collaborative and confident they are, the less protective” Suzanne interjects. “I mean, Paul is almost 70, we once got this text from him at night saying, ‘I’m just passing under your house, I have an idea, I’ll drop something off.’”

“Then there was Helen Amy Murray, better known for her textured furniture and Giles Deacon, who has a very urban vocabulary,” says Christopher – Deacon integrated wires and chains into his designs and there was also Vivienne Westwood, who came up with a Union Jack design.

“Her work is very exciting, always with an edge to it, always political,” adds Suzanne.

“We’re always looking for designers who can contribute something different.”

WE WANTED TO BE PURISTS. NO SHORT CUTS. WE WANTED TO HAVE LOOMS OF THIS HAND-SPUN WOOL IN OUR SHOP, TO SHOW PEOPLE HOW WELL THEY WERE MADE BUT ALSO HAVE A DESIGN ELEMENT.

“You cannot look at something and say, ‘I could have done that,’ that’s nonsense, I’ve always been interested in how other minds work. If you take McQueen,” Suzanne says, who made fantastic hummingbird rugs for them, “he fidgeted and was unfocused – you have to imagine him as a creative [person]. We were talking about the quality of wool and he just got up in the middle of it and walked off but then he turned around and said, ‘Let’s do it…’ These are big designers who want to leave a legacy behind, they wouldn’t do it if the rugs were poorly made.” The Sharps even managed to work with 100-something-year-old Hungarian-American ceramicist, Eva Ziesel before she passed away three and a half years ago.

These collaborations, whether high profile or not, are creative encounters, and this is what makes The Rug Company so distinctive. It’s not just that they’re versatile and work with prominent fashion, industrial and furniture designers, most of whom have never designed rugs before but that they still manage to create a coherent, contemporary-yet-classically-based look that can be identified as The Rug Company’s own. It’s all down to their sphere of influence, a strong vision, and an uncanny ability to be instantly recognisable, no matter who the designer is. Suzanne put it best when she told me, “Even when the design’s edgy, it’s not screaming at you.” Their most outlandish designs are matched with poised colour schemes, tempered prints and careful geometries. There’s a constant equilibrium to their compositions, a paring down of the elements.

People also love The Rug Company for the extras, such as their policy of being able to take the rugs home, to ‘live with them for a while,’ before you decide what you’ll keep. And then add to this their bespoke service, which forms a major part of their business, where the size, colour and shape of any design can be customised, or commissioned from scratch.
Christopher tells this story of how a customer once walked into their shop in London – they now have 24 branches, mostly in the US and Europe, but also South Africa, Asia, and the Middle East, namely, Lebanon and Dubai – and asked for a rug the colour of the saleswoman’s eyes.

As we speak of their future projects, which involve a new Vivienne Westwood collection and an exciting collaboration with Elie Saab, I dare to ask, again, what it’s like to live, work, and raise a family together. “Oh, we don’t cross over at work,” Suzanne says, with a twinkle in her eye, “Chris deals more with the designers and the business side of things, and looks after the staff. I’m on the photo shoots and I design a lot of the collections.” And suddenly, just like that, the couple’s energy, the way they look at each other, it all makes perfect sense.