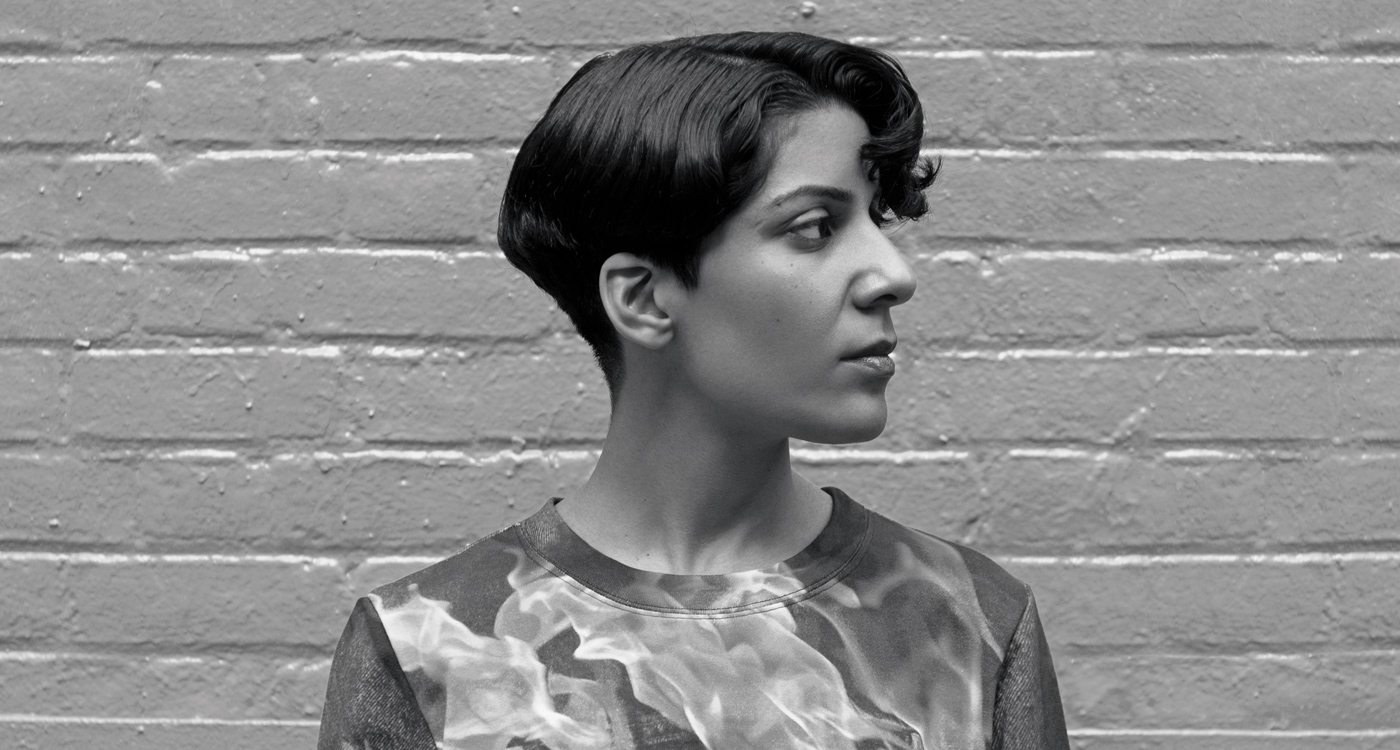 Fatima Al Qadiri is a Kuwaiti Musician and Conceptual Artist Who Is Unafraid of Tackling Delicate Issues Head On
August 13, 2014 Sukhdev Sandhu

Born in Dakar and raised in Kuwait City, Fatima Al Qadiri is a genre-mixing phenomenon in the world of electronica. The New York-based visual artist and composer’s works pivot around the politicised axes of gender, consumerism, military action and cultural stereotypes.

“I believe in djinns,” says Fatima Al Qadiri. “I believe in evil spirits that haunt the earth. I don’t smell or see them but I feel them, especially in Kuwait. It’s one of the most haunted places on earth. Even with all the concrete and highways and esplanades. It’s very creepy. We have Greek ruins in Kuwait. Alexander the Great built sacrificial temples on one of our islands. I always feel some kind of dread there. Even inside my house, it takes me hours to get to sleep. And music is a kind of ghost too, it’s about conjuring memories, apparitions, something that reminds you of your past.”

It’s odd to be talking about ghosts and revenants with Al Qadiri. After all, we’re sitting inside PS1, MoMA’s contemporary art hub in Long Island City, New York, that’s meant to be an incubator for newness. And born in Senegal in 1981, Al Qadiri is herself often seen as an icon of newness. She makes and curates conceptually inclined, drily satiric art. She’s written for influential art and fashion journals Bidoun, Frieze and DIS. She’s one of a growing band of producers – among them Holly Herndon, Laurel Halo, Maria Minerva – who have made waves in what often seems like the Boys Own world of international electronica. 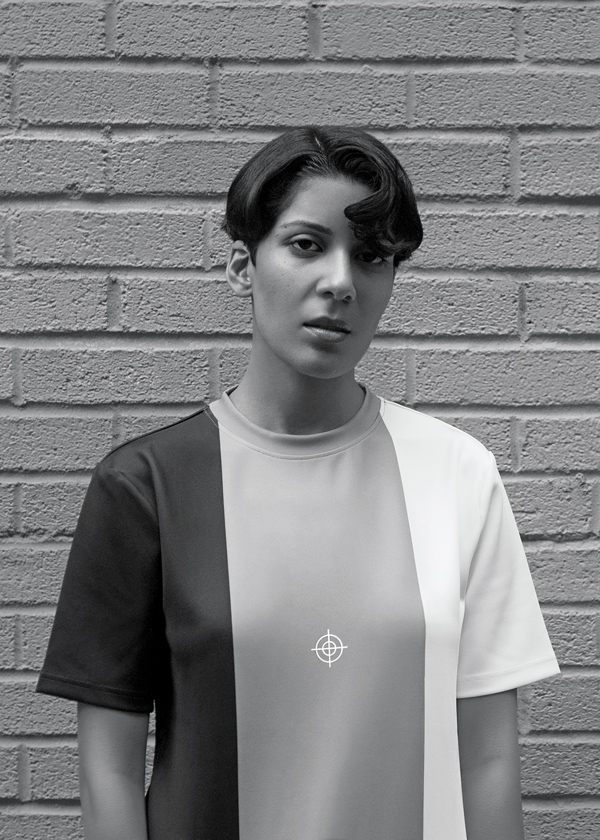 Yet it’s hard to talk to Al Qadiri for any length of time without the spectres and demons of old Kuwait leaking into the conversation. “Kuwait in the 1980s was a utopia. It was extremely comfortable and sheltered. I constantly had a feeling of it as sublime. The country is very flat, the sky is huge and the buildings are very low, so you’re always looking up into this expanse. And like the majority of middle-class Kuwaitis, I’d go to London every summer to escape the 50-degree heat. I’d go to Woolworths to buy sweets and comics. Andy Capp!”

Everything changed on the 2nd of August 1990. “I woke to watch a Japanese cartoon dubbed into Arabic and suddenly a black-and-white film kicked in. Some guy I’d never heard of – Saddam. I remember thinking, ‘Who is this guy?’ I didn’t even know the word occupation.” Iraq had just begun its invasion and over the next seven months, more than 1,000 Kuwaitis were killed and 300,000 fled the country.

Al Qadiri’s parents stayed and at great risk to their lives, joined the resistance. “My mother would distribute forbidden newsletters by wearing an abaya – which she would never normally do – and pretending to be pregnant, so she could conceal the leaflets on her body. On one occasion, she was stopped at a checkpoint where one of the soldiers told her, ‘There is an occupation, but you Kuwaitis are still fucking like rabbits.’ If she’d been detected, she’d have been shot dead on the spot.”

“All the phone lines were monitored by the Iraqi police. My father was once half an hour late to a meeting and when he arrived, everybody at the safe house had already been murdered. Our family was moving from house to house almost every week but still my father was eventually a prisoner of war. He was taken from our house to a concentration camp in Basra for a month.”

Al Qadiri says it was this period of conflict and chaos, of everyday extremism, that helped give birth to the music – icy, machine-like, almost post-human – that she currently makes. “Kuwait was burned to the ground. It was an ashtray nation. In that alien landscape, I’d wake up and see the illuminated darkness that was the daytime burning of the oil wells. The black sky was lit by the sun. I felt I was living in a sci-fi movie, as if I was in Blade Runner. You’d hear machine gun fire, air-raid sirens. After I moved to America, it took me years to get over my fears about fireworks on the Fourth of July. They sounded like bombs falling.”

For Al Qadiri, not yet a teenager and increasingly unable to leave bed or attend school, video games became a lifeline. “Me and my young sister played them during and after the war. Even Desert Strike: Return to the Gulf! We were lords of the universe in video games. We had power. They were an alternative universe where we could react against traumatic adult reality. We could escape. And the music was so hypnotic! Little 8-bit melodies that lulled you into a waking sleep while playing the games.”

Living in a ravaged nation about which few Westerners cared – French philosopher Jean Baudrillard, critiquing postmodern society’s cult of the spectacle, said it was as if the Gulf war had not actually taken place; most TV footage focused on the Allied bombing of Baghdad rather than daily reality for Kuwaitis – and often retreating into the virtual and electronic worlds of gaming, Al Qadiri felt increasingly out of time and place.

She felt equally out of place when she moved to America. “I thought the country would be like Saved By the Bell or The Fresh Prince of Bel-Air and that everybody had bleached teeth, good hair and smelled of Gio Armani. I landed at Penn State University, which is right next to the state penitentiary and has the largest fraternity system in the world. I had a millimetre of orange hair, blue contact lenses and a giant orange fake-fur coat. I really looked like an alien. When I told people I came from Kuwait, they’d reply, ‘What state is that?’ I lasted one semester.” 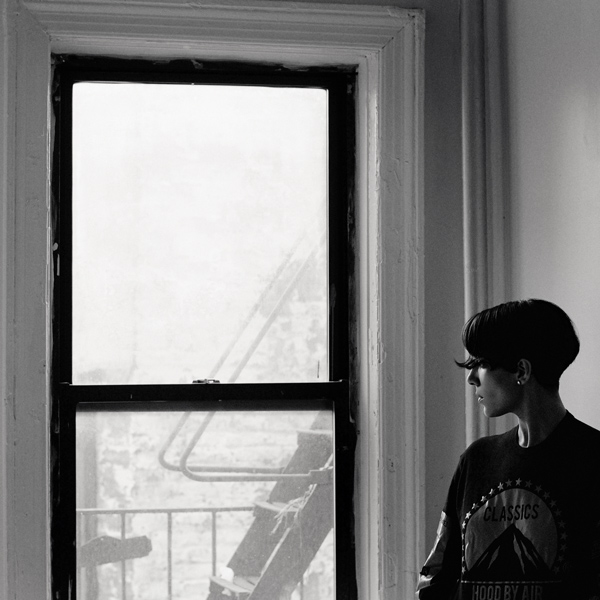 Nations as mythologies, as fantasies, as erratic aggregations of commerce, junk-media, fabricated fictions – all these feed into Al Qadiri’s debut album Asiatisch. Its title is derived from the German word for Asia but it’s actually about the concept of China. Song titles such as Shanghai Freeway, Hainan Island and Szechuan may reference real places, but the use of synthesised voices and digital snares alongside “traditional” gongs and bells, the toggling between classical poetry and nonsensical Mandarin and the creation of a moodscape that moves seamlessly between cheesy, eerie and darkly erotic suggest that Al Qadiri is more interested in Chinas of the mind.

“I’ve never been there,” she says unapologetically. “The record is trying to posit a notion of an imagined China. This imagined China is, for me, something that has been brewing for centuries. It started with the opium wars. It’s like a garbage tapestry. You don’t know what the fabric is, it’s not something that’s easily identifiable or quantifiable, there’s a catalogue of films and cartoons and comic books within it but one that many authors have contributed to. The Asia in Asiatisch is a nexus of stereotypes that have been perpetrated, elaborated, embellished and weaved, each time further and further dislocated from the original misrepresentation.”

This sounds rather like Edward Said’s concept of Orientalism, which in his celebrated 1978 study he characterised as a “cultural apparatus that is all aggression”. But where Said saw himself as a debunker and exposer of those phoney versions of the East peddled by novelists, historians and diplomats, there’s little sense of protest in Asiatisch. Al Qadiri doesn’t claim – or perhaps even seek – to stand outside of that “nexus of stereotypes”. “I don’t know the real China,” she says. “Only the China the West has been feeding me, this elaborate, simulated roadtrip through virtual China that has been developed over centuries.”

The China that Al Qadiri creates isn’t a source of ancient wisdoms. It is thrilling, hyper-sleek, as glistening, eager to delight and designed to ensnare as a shopping mall or the duty-free concourses of a modern airport. It’s an Emerald City, a sci-fi wonderland, a theme park simulation of China – a utopia that, like all utopias, doesn’t exist. Or should that be a replicant China? “I always think in architecture,” says Al Qadiri. “The China on this record would be Brutalist architecture, made of jade. There’s something very dainty and delicate about my melodic compositions but they are made by digital tools, which also render them clunky, cold.”

The record bears the imprint of grime, especially a fleeting micro-genre of it, christened “sinogrime”, which circulated as a mix CD put together by Steve Goodman, aka Kode9, the boss at Al Qadiri’s label, Hyperdub. “Grime immediately hit me in the gut,” she recalls. “I felt it was the most futuristic music I’d ever heard. The most macho genre of Western music. It was martial! The most apocalyptic and the most childlike music! And as a child who’d lived through the apocalypse, it resonated with me. As a videogame fan, I knew some of the earliest grime tracks were recorded using PlayStations.”

What’s striking about a lot of art currently coming out of the Middle East and the Gulf states in particular, is its relative lack of interest in tradition, reverence, continuity. In her 2012 memoir, ‘The Girl Who Fell To Earth’, Qatar-born film-maker Sophia Al Maria, who has collaborated with Al Qadiri in the past, elaborates on her “Gulf futurism” theory. “If you think of history as something defined by the laws of physics and the discovery of gas and oil wealth as a sort of event horizon from which there is no going back… what’s happened is a wormhole stargate mindfuck.”

The scale and intensity of the warp-speed modernisation programmes in so many Gulf states – their steel-and-glass citadels under baking hot suns, their labour camps full of imported labourers from Asia – are perhaps better chronicled by science fiction, video games and HD entertainment than by more traditional forms of journalism or sociology. “There’s been a generational quantum leap in Kuwait,” says Al Qadiri. “The houses are not made of mud anymore but of concrete. People don’t sleep on the roofs of their houses. There’s AC.”

“My grandmother would get water from the well, waking up at 5am so that nobody would see her and so that her honour wouldn’t be in question. Then she’d come back before anyone else had woken up. She was illiterate, like most women of her generation. The idea of going to a university in America, as I did, was alien. She thought white people were demons, blue-eyed devils, thought they were djinns and evil spirits. Then my parents saw the transformation from a medieval lifestyle to a nation-state. My generation went one step further, many of us studied or moved abroad. Now the majority of the Gulf population is under 24. It’s a very youthful area.”

Navigating the circuits of the international art world, making formally bold, genre-splicing, electronic music, being part of a two-man, two-woman production unit suggestively titled Future Brown (named after a metallic version of that colour that doesn’t exist naturally), Al Qadiri might seem to be an ambassador for future-lust amnesia. But certain memories can’t be wished away. Memories of arrests and disappearances, of dystopias and ashtray nations, blood in the desert, lingering apparitions. They lie, seething and barely suppressed, beneath the super-flat surfaces of her music.