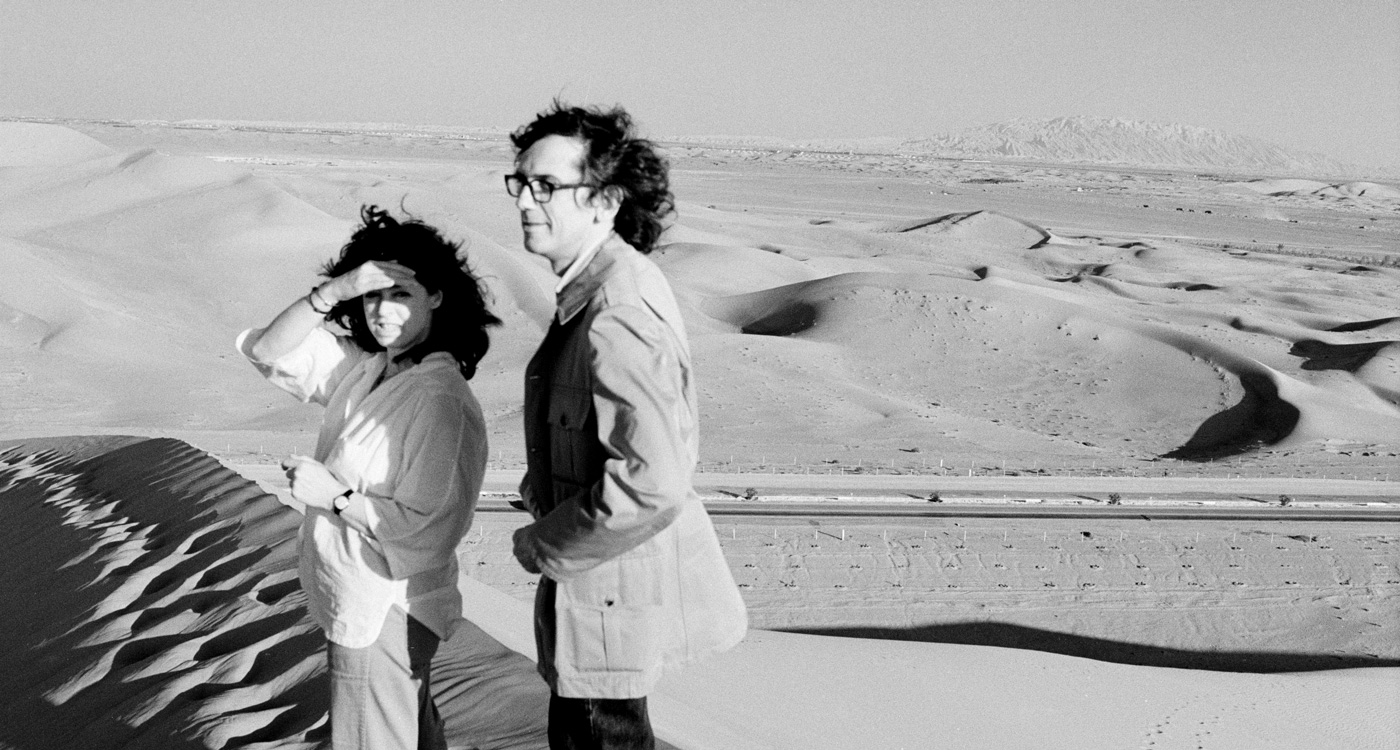 Christo and Jeanne-Claude Have Been Involved in Some Monumental Art Installations But There's One That Got Away
November 30, 2013 Raya Jalabi 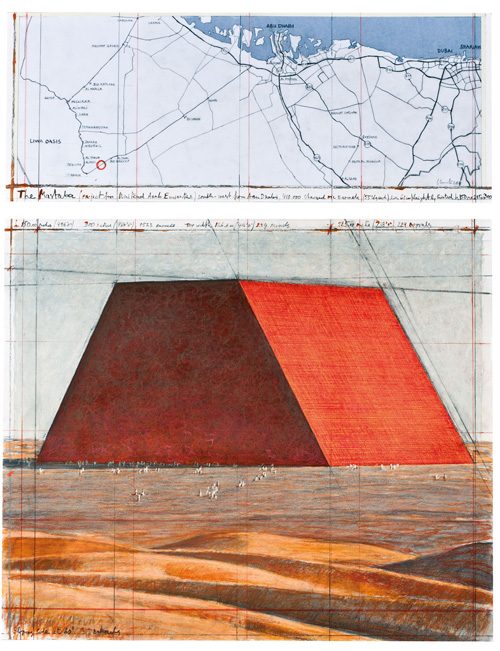 Taller than the Great Pyramid of Giza and built from thousands of petrol barrels, the towering structure in Abu Dhabi’s open desert will be visible from kilometres away.

If ever it is completed, Abu Dhabi’s Mastaba Project would be the world’s largest public sculpture. First developed by the celebrated art duo Christo & Jeanne-Claude back in 1977, a new book by Taschen documents the process of the monument’s construction.

The craft of the builder was regarded as a gift in ancient Iraq, one taught to men by their gods. Mesopotamian mythology exalted construction and architecture, considering both pivotal to civilised society. The builders of Babylon are credited with inventing urban planning and ziggurats but it is a mere bench that has inspired the first Middle Eastern project undertaken by legendary art duo, Christo & Jeanne-Claude.

“The mastaba is a mud bench, that would be found in front of houses in the oldest cities in the world,” Christo Vladimiroff Javacheff, the artist famous for wrapping public buildings in vivid fabrics, tells me. “It’s a simple geometric form.”

In this case, though, that ‘simple geometric form’ is a multi-million dollar sculpture to be built in the Abu Dhabi desert. Entitled ‘The Mastaba: Project for the United Arab Emirates’, it will become the biggest art sculpture in the world, if ever it is finished.

Christo sits on the edge of his grey sofa in the building he has lived and worked in since 1964. He is wildly energetic for his 77 years, fidgeting constantly, his body trying to catch up with how quickly his mind gallops forward. Born in Bulgaria on the exact same day as his future wife, Christo fled his homeland and Communist rule. While living in exile in Paris, he met Jeanne-Claude, the woman who was to become his wife and artistic collaborator. They arrived in New York in 1964 and set up shop in a building downtown – the same building Christo lives in today, now alone after the unexpected death of Jeanne-Claude in 2009.

The duo is famous for their temporary public art works, large in scale and imagination, though they’ve also created many smaller permanent sculptures too. Their ‘wrapped’ installations, in which the pair covered parliaments, trees and even coastlines in polyester fabric, are widely celebrated. Their most recent wrapping, ‘The Gates’ (2005), was a series of 7,053 gates made of saffron-coloured fabric, scattered along the paths of New York’s Central Park.

Because of their scale and public nature, many of the duo’s projects take years, if not decades, to achieve. When they happen at all. “In the last fifty years,” Christo continues, “we realised 22 projects and failed to get permission for 37.” 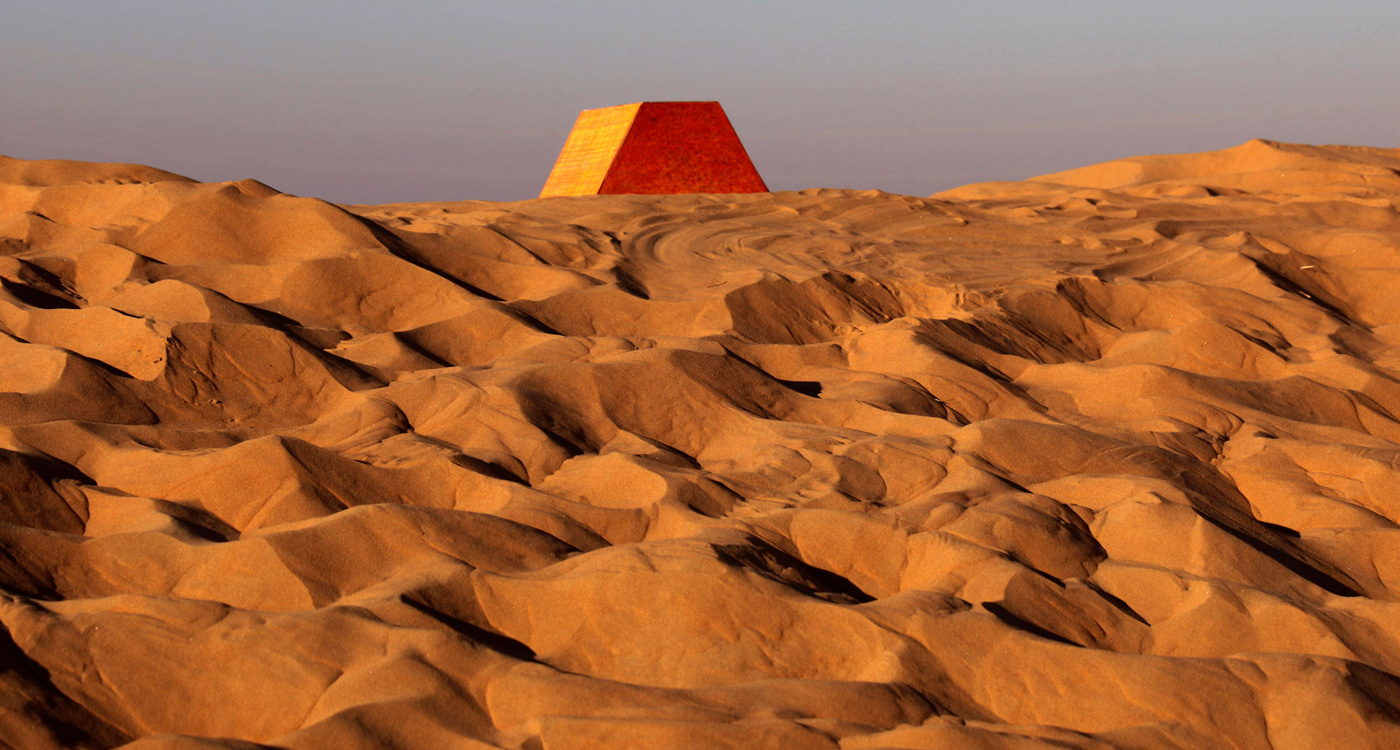 Unsurprisingly then, the Mastaba project has a history dating back to 1977. When built, it will be composed of 410,000 multi-coloured oil barrels, stacked 150 metres high and 225 metres deep at the 60 degree slanted walls and 300 metres wide at the vertical walls. It will be the pyramid of the petroleum age.

Christo & Jeanne-Claude have long used oil barrels in their works. In 1962, they unveiled ‘Wall of Oil Barrels: The Iron Curtain’, in which they blocked off Rue Visconti in Paris with a wall of 89 barrels. “We barricaded the street with barrels, like a poetic response to the Berlin Wall,” says Christo, whose opposition to Communist systems has informed all of his work to some degree.

“We refuse to take money from anyone,” he continues, explaining the rather complex financial structures that have ingeniously sustained the duo’s oeuvre and afforded them artistic independence. “We used the capitalist system to the end!” 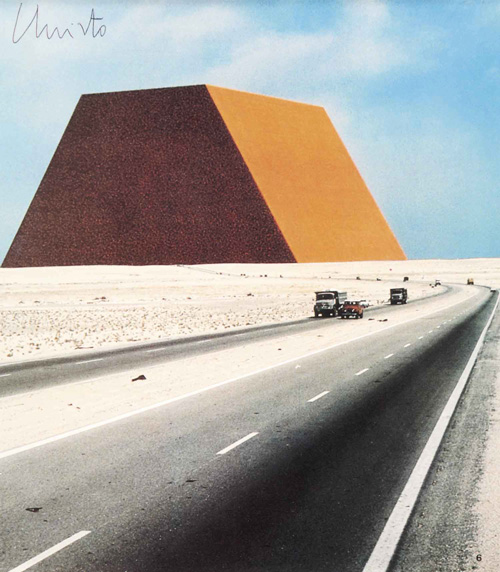 The Mastaba has gone through many different incarnations since its inception in the late 1960s. It was originally designed on a smaller scale for sites in Texas and Holland. When both of these early projects failed to get off the ground – “the chemistry just wasn’t right,” Christo explains – a French diplomat suggested they transport The Mastaba to the newly-independent and then little-known nation of the United Arab Emirates.

“The country was very young, the atmosphere was so fresh,” the artist recalls of his first visit to the UAE. The couple travelled with their long-time photographer, Wolfgang Volz, who is now the project’s director.

After scouring the country, they settled on a site in the Al Gharbia region, working for several years to secure the land from the royal family. “The Mastaba was always conceived to be a part of the desert’s landscape. There are unmoving dunes and their colour is spectacular because there is so much iron in the sand,” Christo says of the site’s beauty. “The colour for The Mastaba comes from this warm landscape.”

The choice of location has, however, left many wondering if the sculpture is intended as a political statement. “Of course, it has links, this is something you cannot ignore,” he continues, alluding to the barrels’ connotations. “Oil is profoundly part of local heritage. But our work has no messages. All of our projects are totally irrational, totally useless.”

Over the years, the couple worked hard to generate interest in the project in Abu Dhabi, something Wolfgang Volz tells me is one of his most challenging roles. To sustain excitement and generate new interest, the duo worked on a book about the project. Published before the installation’s actual completion, ‘The Mastaba: Project for Abu Dhabi’ is a collection of sketches, documents and photographs of the project in the making and was published this November by Taschen, the publishing house they’ve collaborated with since 1994.

THE MASTABA WAS ALWAYS CONCEIVED TO BE A PART OF THE DESERT’S LANDSCAPE. THERE ARE UNMOVING DUNES AND THEIR COLOUR IS SPECTACULAR BECAUSE THERE IS SO MUCH IRON IN THE SAND,” CHRISTO SAYS OF THE AL GHARBIA SITE’S BEAUTY. “THE COLOUR FOR THE MASTABA COMES FROM THIS WARM LANDSCAPE.

“The book helps Christo convince politicians and the public to give permits and support his idea of realising The Mastaba,” Simone Phillippi, Taschen’s Managing Editor explains. The artist designed the book himself, coming up with the idea to publish it in both English and Arabic, the first time Taschen issues an Arabic-language book.

When asked what his biggest hopes for the Mastaba are, Wolfgang Volz simply responded, “its being built.” As with so many of the artists’ works, the journey has been rife with challenges and Volz anticipates many more to come. But Christo and Volz are hopeful that the project will be finished.

In a way, Mastaba will cap the duo’s career. With Jeanne-Claude no longer alive to see the project for which she and her husband have fought for so long, Christo’s determination to see it built can be read as his farewell to his partner, a monument to love, like the one Shah Jehan once built in Agra for his wife.