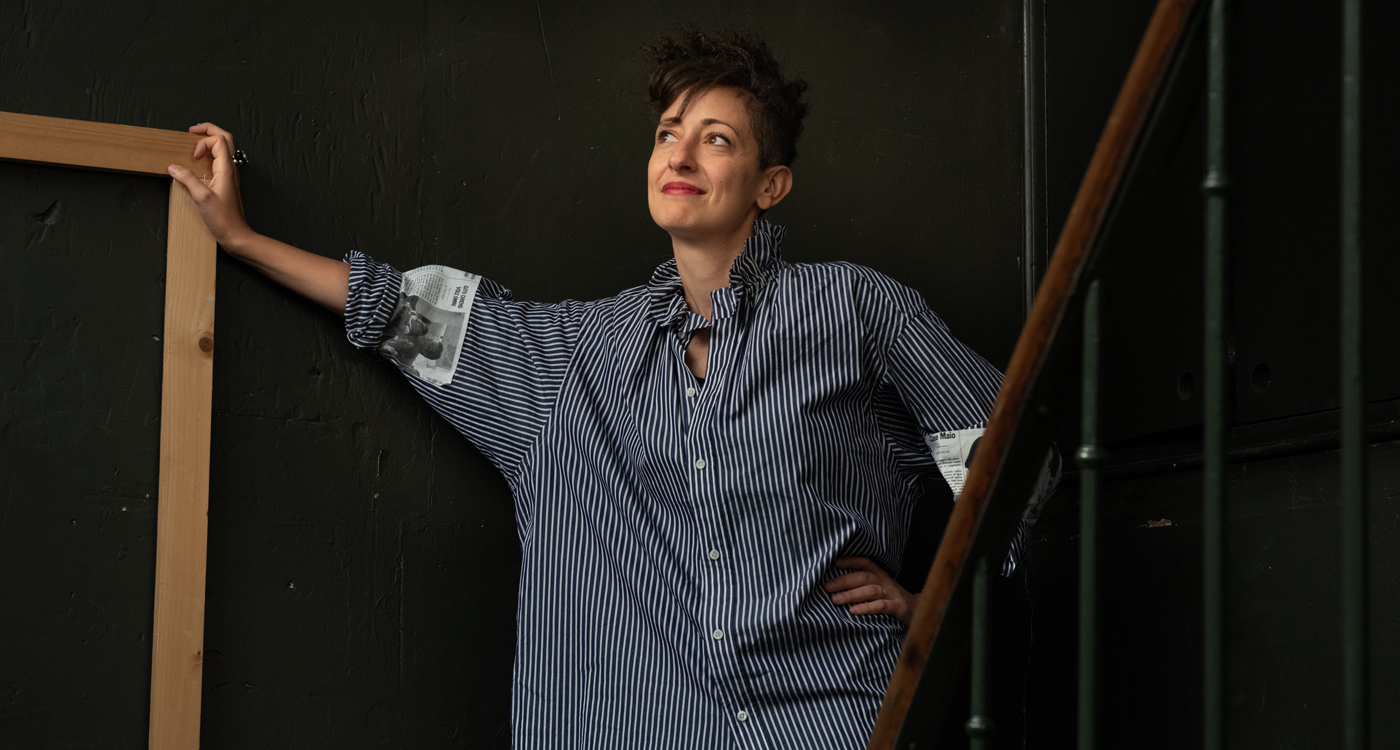 The Talented Franco-Lebanese Architect Lina Ghotmeh Pulls the Safety Nets Back on Her First Design in Beirut
March 3, 2020 Marwan Naaman

Architect Lina Ghotmeh digs into Lebanon’s heritage to create a contemporary landmark that’s as innovative as it is nostalgic.

The urban landscape across from the Port of Beirut has undergone a small but significant change. At the edge of Saifi and just beyond Downtown Beirut’s eastern boundary now stands Stone Garden, Lebanese architect Lina Ghotmeh’s visually arresting new building and her first in the nation’s capital. Slated for completion sometime in early 2020, the structure is described by Ghotmeh as a manifestation of her relationship with Beirut. “Stone Garden represents our relationship to the ground and to our roots, going back to memories of the city,” she says. “It’s my reflection on architecture, on how we can make buildings that go into the sky be lovable.”

The first thing that passers-by notice when they see Stone Garden is most probably its façade: the earth-covered concrete is cream-coloured, much like many of Beirut’s traditional homes, but it’s jagged, rough, post-modern, in a nod perhaps to the city’s imperfect beauty or maybe as an architectural reference to Lebanon’s violent 1970s and ‘80s civil conflict. “The whole façade is like laboured earth,” says Ghotmeh, “it’s chiselled like the ground would be before you plant it.”

The windows are also quite distinctive – asymmetrical and sized differently. “The windows were an important step,” says Ghotmeh. “They’re openings reminiscent of bullets on a façade, of a torn texture, and they become places where you can plant, creating a new experience. There are also inward balconies that become planters and frame Beirut.”

While the building isn’t quite complete yet, the Mina Image Centre already operates on the ground floor. Having a photography museum within the building is significant: Stone Garden is a joint venture between Fouad Elkoury, the Lebanese photographer known for his iconic photos of the Lebanese war, and Lebanon’s RED Development. “The project started after my encounter with Fouad Elkoury, who photographed the city during the war,” says Ghotmeh, adding that she sought to “transform a negative memory into something positive and a new way of living.”

The buildings next to Stone Garden are much older, many of them representing the fast-disappearing architecture that characterises Beirut’s bygone Golden Years. In contrast, Ghotmeh’s 13-storey structure is brand-new and significantly larger in size. “When I was confronted with this land, I had to build a tower – the exploitation of land in Beirut allows towers to emerge,” she says. “This was a big challenge. How can you build a tower without destroying the old urban fabric? I decided to face the challenge and do what the urban fabric did in the past: stick to your neighbour and occupy the whole plot. Although the building appears as a new way of expressing, it also solicits our memory; we want to touch it and feel it. It’s not obstructive to its context, but a place that has a story to tell.”

Inside, Ghotmeh created a collection of apartments in which no two are the same. “This is a critique of the apartments that we see multiplying in Beirut,” she says. “Our living has to be different from one another, so you have unique experience and unique apartments on each level.” Having distinctive homes allows each resident to have a deeply personal living experience. “Some apartments have very large windows, while others have more framed windows,” Ghotmeh adds. “The quality of the space changes from one floor to another. The windows are acting as gardens, and these gardens act as natural dividers between the living area and the bedrooms. You cannot partition the space in a conventional way.”

Stone Garden is Ghotmeh’s first project in Beirut. The architect has been running her own Paris-based practice since 2016, shortly after leaving Libano-Italiano-Japanese DGT Architects, the firm she co-founded with partners Tsuyoshi Tane and Dan Dorell in 2006. “I started my first partnership very young to realise the Estonian National Museum. My own view of architecture and the way to deal with the environment took shape clearly, and I decided to lead my own vision with my international team of 25 architects in Paris. It’s a natural evolution in our creative field.” Prior to this she worked at Ateliers Jean Nouvel and Foster + Partners. Over the years, Ghotmeh has prioritised projects that challenge her, pushing her boundaries as an architect. “I like to work with people who have vision, who want to do things and change things and enjoy what they’re doing,” she says.

Some of Ghotmeh’s current projects include the Centre Chorégraphique National in Tours. “It’s all about urban dance, and how to make dance part of the urban environment,” she says. “I’m also working on a tower in the 13th arrondissement in Paris. It’s a tower built around sustainable feeding, a place where people learn how to eat more sustainably, raising awareness about climate change and our impact on the planet.”

Most recently, in October 2019, Ghotmeh received the prestigious Pierre Cardin Architecture Award in recognition of her impressive body of work. “It is a great honour to receive this prize from the French Academy of Fine Arts upon their members’ recommendation and without any prior application on my behalf,” she says. “It makes one feel that the world is connected, and when one thrives for good work it reaches others naturally. Our environment very much needs positive, optimistic, sensitive and ecological architecture.”

Reflecting on her career and the singular structures she’s created over the years, Ghotmeh believes that her strength comes from the attention she gives to each project’s immediate environment. “When you respect the context,” she says, “something exquisite emerges from the place.”