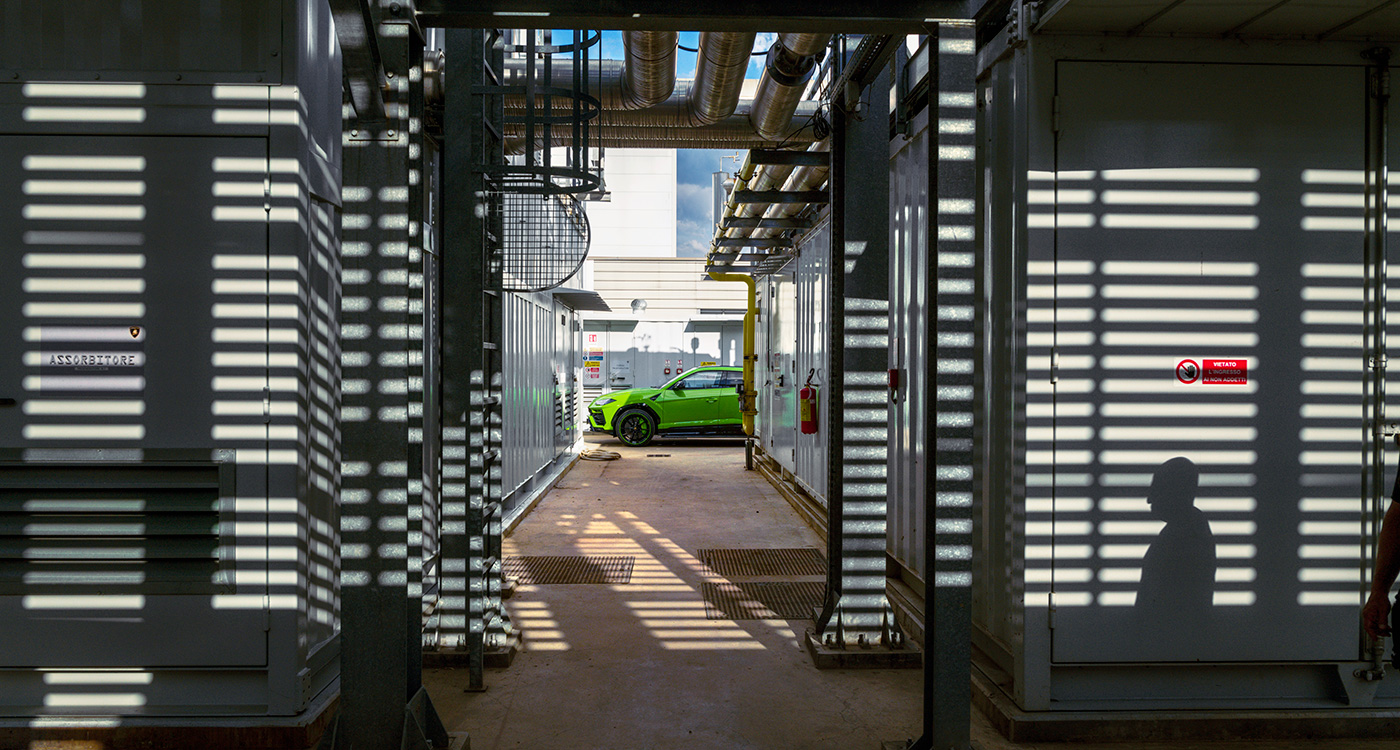 In an age of disruption, businesses live and die by their ability to adapt. That’s because, for global enterprises, innovation and change are the twin engines of growth, competitive advantage, and success. Yet, instigating change is so much easier said than done, and companies often struggle in their pursuit of change, not just because they don’t do a good enough job at inspiring their staff to embrace the concept of transformation, but more so because they fail to help them develop those innovative ideas. Given such a backdrop then, one has to give major kudos to Lamborghini for the work it is doing in order to drive change. Not only did it become a carbon neutral company in 2015 (a status it has conscientiously maintained despite doubling in size since the launch of their Urus SUV in 2017), it also just announced that 1.5 billion Euros – the biggest single investment in the company’s history – will plough into the business over the next three years in order to electrify its line-up. Effectively, by 2024, every single vehicle it produces will be a hybrid. And, by doing so it’ll reduce its fleet emissions by 50 per cent. But that’s not all, it’s also going full steam ahead with the first fully electric Lamborghini, which should debut in 2026 or 2027, becoming the company’s fourth model line, alongside the V12 hybrids, V10 hybrids and V8 hybrids. 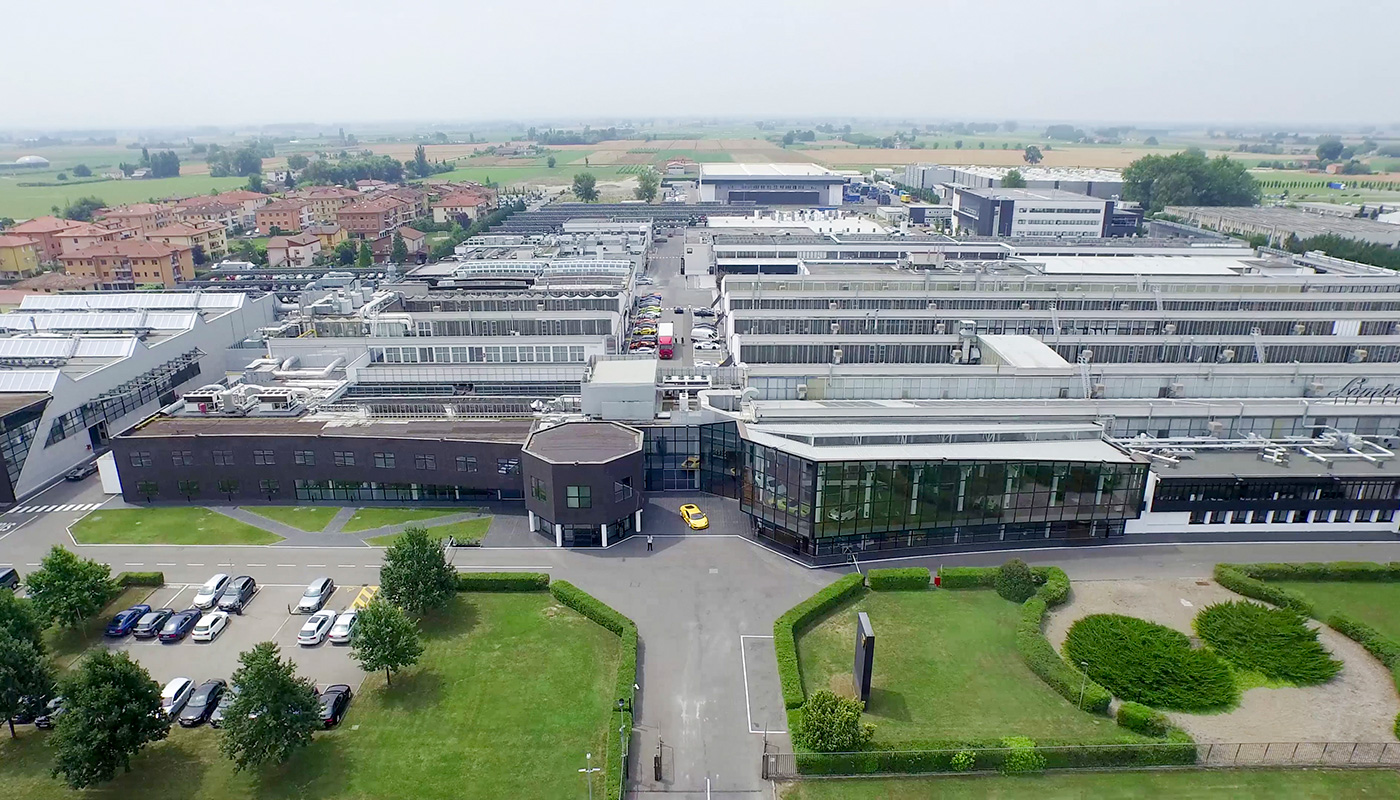 ABOVE: The site of the firm’s Bolognese headquarters has doubled in size, to 80,000 sqm. While the photovoltaic system there covers an area of around 15,000 square metres, making it one of the largest private industrial solar systems in Italy.

“For us, it’s not important to be the first into electrified cars but to be the best,” revealed Stephan Winkelmann, the CEO of Automobili Lamborghini during our recent trip to their headquarters. Naturally, the prospect of a Lamborghini EV raises all sorts of questions: What would it sound like, how will it deal with all the extra weight of its batteries, what kind of balance will it strike between weight and power, and how will it achieve the right kind of dynamics? Clearly, we won’t know the answer to any of those questions until the EV is unveiled, but for now the company execs are keen to showcase the changes they’ve already undertaken and this is why they invited 40 members of the world’s press. But that they invited us to stay in tents – yes tents – pitched in their very own park, clearly indicates there’s an intriguing story to be told here.

ABOVE: The land that was assigned to the Lamborghini Park used to be regular farm land but since it was acquired by Lambo it has been re-zoned as a protected site.

It turns out that Lamborghini acquired this 6-hectare plot of farmland back in 2005. It’s located just a ten-minute walk up the road from the factory and apart from planting 10,000 oak trees on this land – some of which now measure 9 metres in height – Lamborghini also turned it into a biodiversity research facility in collaboration with the municipality of Sant’Agata Bolognese and the universities of Bologna, Bolzano and Munich. But why? “The most important reason was of course to offset the greenhouse gases emitted by the factory,” says Massimo Scarpenti, the company’s head of safety, energy and environment, who explains that researchers are continually measuring the height of the trees, the width of their trunks and the carbon content of the soil in order to calculate exactly how much carbon the park is offsetting. (Oh, and by the way, when compared to similar parks that fall within the Audi Environmental Foundation, Lamborghini’s trees are, as Scarpenti proudly points out, the fastest growing of all). There’s even an apiary in the park, comprising thirteen hives and 600,000 bees. “Analysis of honey, wax and the bees themselves allows detection of environmental pollutants and it’s probably the most accurate method of controlling pollution in the environment surrounding our production plant and the inhabited area of Sant’Agata Bolognese,” says Scarpenti. 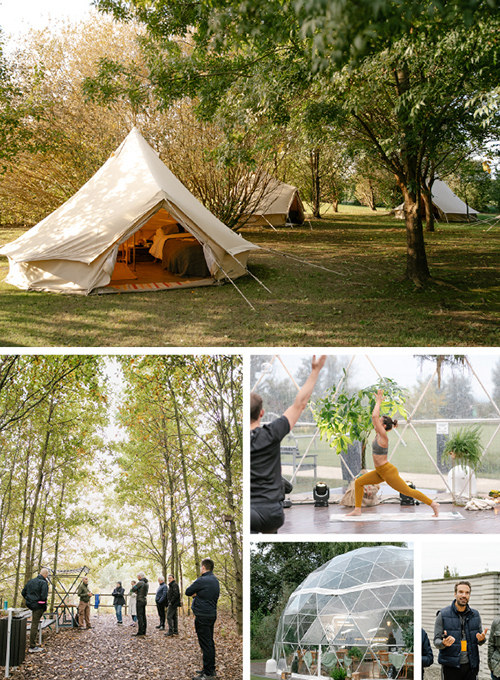 TOP: Glamping in Lamborghini’s backyard, in beds with mattresses and pillows. BOTTOM LEFT: A tour of the fast growing oak trees at the Lamborghini Park. Opposite, bottom centre: A geodesic dome was erected for our dinner with Lamborghini’s CEO. CENTRE RIGHT: The dome was also where we got to enjoy a sunrise yoga session to kick off the ‘s activities. BOTTOM RIGHT: “Where exactly are the camp’s bathrooms?” We can only imagine what Official Bespoke’s Editor-in-Chief was discussing here.

Back at the plant, Lamborghini’s expansive photovoltaic system has enabled a reduction of 2,000 tonnes of CO2 per year. It covers an area of 14,600 square metres, which makes it the largest integrated photovoltaic system in the industrial sector in in all of Emilia-Romagna. Furthermore, with 2.2 MW of power, it produces an average of 2,500,000 kWh of electricity per year, which is equivalent to the annual consumption of 530 apartments.

Now, this is all of course impressive stuff but we discovered Lamborghini has one other major piece of artillery in its sustainability arsenal and that’s district heating – and it’s the first car company in all of Italy to harness this technology. The way it works is that Lamborghini has an off-take agreement with a biogas plant near their factory that allows it to utilise the plant’s wasted thermal energy. So, they take that energy and heat water to 85 degrees before then pumping it through a closed underground pipeline loop between the San Lorenzo Biogas plant and the Lamborghini plant. District heating helps save Lamborghini around 2,500,000 kWh of thermal energy, which is equivalent to the annual energy requirements to heat 156 apartments. And the thermal energy doesn’t just help them keep their production departments and offices hot in winter, in summer it is converted into cooling energy by two absorption chillers designed for air conditioning applications.

As a result of these diverse initiatives, 40 per cent of Lamborghini’s electricity usage can now be classified as renewable, with the remaining 60 per cent offset by the acquisition of green energy credits. The next step apparently, targeted for the end of 2023, is to reduce total electricity usage by 80 per cent thanks to a new biogas plant (that they’re setting up in collaboration with San Lorenzo once again).

The nuts and bolts of all of this is that Lamborghini is determined to remain at the forefront of automotive supersports segment. And with the cash to splash – thanks to the Urus, which has propelled the company to record production and profitability figures in both 2020 and 2021 – it is confident its bases are covered no matter what the future holds. “The most important thing is that we want to foster the future and have wonderful results, to be able to face the challenges of future technology and to be able to reinvest for what’s needed and whatever else might come up,” concludes Winkelmann.