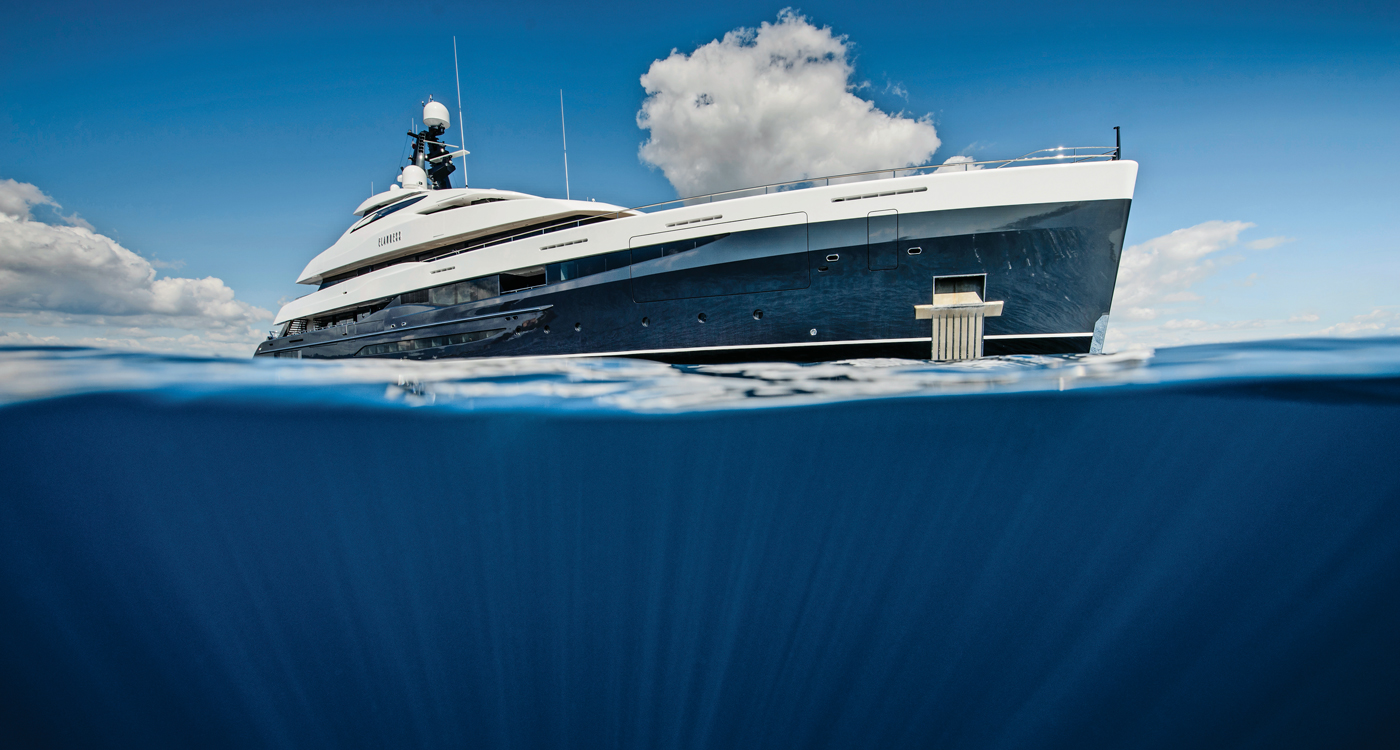 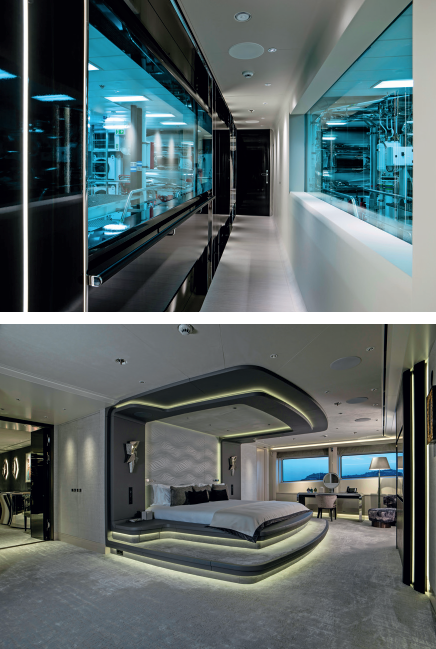 Stretching a lengthy 74.5 metres and comprising 2,065 gross tonnes of steel and aluminium, superyacht Elandess appeared more than comfortable alongside the myriad vessels anchored at Port Hercules at the latest Monaco Yacht Show. Far from meek in the mild waters, she is the owner’s third yacht, and second built by German yard Abeking & Rasmussen. Most pick out her almost vertical Atlantic-bow, gunmetal metallic grey hull and low-slung superstructure to be her key defining features (all of which were designed for ocean-crossing cruising in comfort), but while her sleek exterior design is a masterpiece by London-based studio Harrison Eidsgaard, it is not the usual yachting tropes that cause Elandess to elegantly rise from the pack.

Her owner is no stranger to knowing what he wants. The previous Elandess (now Elysian) came close to perfection, but lacked the fluid open-plan spaces that allow for uninhibited family time. Intent on rectifying this he gave a simple yet unusual design brief: he called for “a sun deck with a boat underneath”, and Harrison Eidsgaard’s genius interpretation is what really elevates Elandess.

Many owners request modern and spacious areas that are equally suited for relaxed family time or entertaining, but Elandess certainly achieves this in ways other yachts simply don’t. Her masterful sun deck sprawls from bow to stern in a yawning expanse of teak. An 8 by 2.5-metre swimming pool with a fully glazed aft end and a glass-bottomed skylight is what first greets guests when they ascend to the sundeck via the yacht’s central spiral staircase, allowing “flickering water-filtered light to cascade all the way down to the lower deck”, says Peder Eidsgaard. Life is made easy with a well-stocked bar, dayhead and shower all neatly integrated into the free-flowing design, as well as a retractable sun screen for those hotter days on board. But it’s the design elements that aren’t instantly noticeable that make life not just easy, but comfortable.

When you sit at the bar, you’ll find there is just the right distance between your stool and the seating area poolside furniture to prop up your feet if required. Whether relaxing by the pool or lounging on the sun pads facing forwards, sight lines to an unforgettable horizon have been guaranteed every time. In fact, this rule applies throughout the yacht, from the raised bed in the master suite, to the private owner’s deck, to the large floor-to-ceiling panoramic windows in the flexible living areas; it has all been devised to ensure optimum vistas. 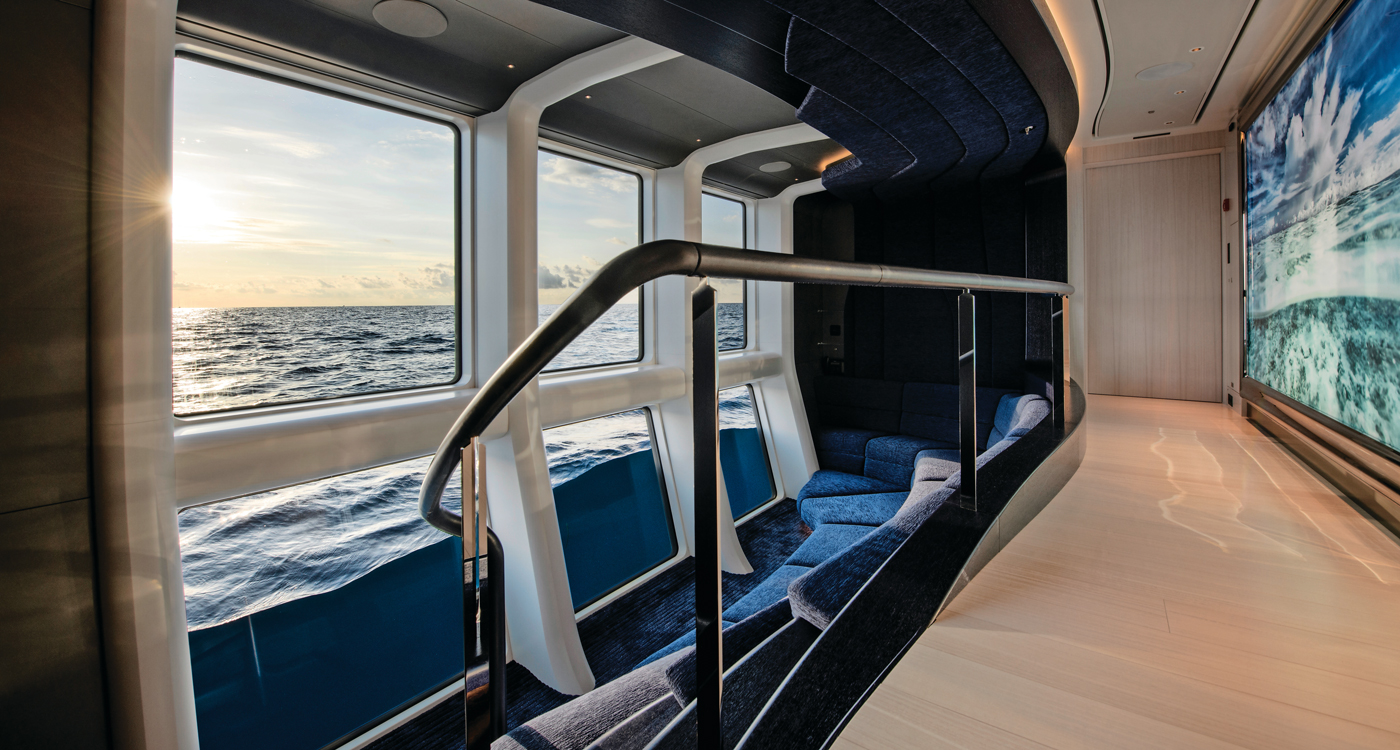 There’s little question as to the best view on board, though. Elandess’s sub-waterline Neptune Lounge – only the second in existence – gives spectacular access to life above and below the waterline. Dark blue double-tiered seating allows for an underwater theatre display through the huge 3-metre tall and 100 millimetre thick glass windows. When underway the views are dramatic, and special underwater lighting heighten the seascape experience at night.

Working closely alongside Harrison Eidsgaard, who also designed the interior, the experienced owner’s ideas (such as a 10 metre drive-in tender garage) and design preferences have been artfully integrated into her contemporary and flexible layout. Guest accommodations are split across six staterooms, with the rare option to be converted into three larger suites. The owner’s cabin on the main deck is equipped with a large office, en suite with central bath, private deck area and his and hers wardrobes. The use of Cipollini verde marble in the master bathroom showers is beautifully complemented by the addition of a custom dressing table by Nature Squared, inlaid with mother of pearl.

The family’s personality is reflected in the bold and colourful artwork that abounds, from Murano glass sculptures to mother-of-pearl and plaster walls by DKT Artworks to hand-laid straw marquetry. The owner’s vision was detailed from the start, and incorporated into each room. Unusually, Elandess incorporates no less than four lounges. The 2.8-metre high sky lounge, where the family spend most of their time, has a relaxed New England feel to it. The observation lounge features richer materials, to give it a more “clubby” feel, while the Neptune lounge is an engaging area. The main lounge provides a more formal space for entertaining.

“No two spaces are the same,” says Nicholas Houghton of Harrison Eidsgaard. “It’s not a copy and paste throughout the yacht, every space has a slight quirk, a slight difference. That’s one of the key qualities of Elandess, and I think it adds a lot of drama and unexpected joy.”

Elandess’s unique naval architecture was developed by Abeking & Rasmussen’s in-house team, while Burgess Technical Services acted as the owner’s representatives. “The clients gave us clear direction, but they also challenged us and asked us to be bold with our design, colours and textures,” says Houghton. “Elandess is not for charter, it’s a very personal yacht, and they wanted their personality to shine through.”

Now you Can Design Your Own Orlebar Brown Swim Shorts