People | Design | Did You Know that the Lebanese Jewellery Brand Tabbah Was Founded in 1862, Making it Only 15 Years Younger than Cartier? 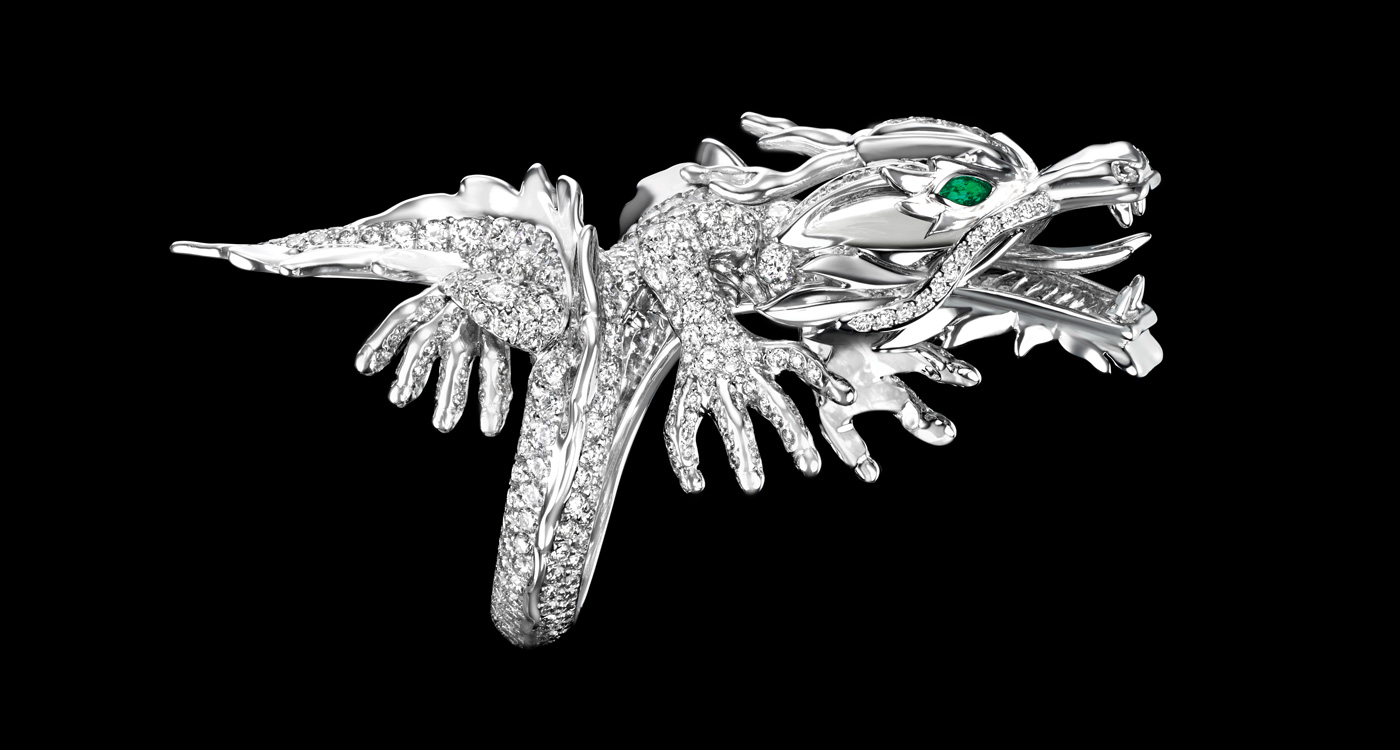 Did You Know that the Lebanese Jewellery Brand Tabbah Was Founded in 1862, Making it Only 15 Years Younger than Cartier?
March 1, 2015 Nadine Khalil 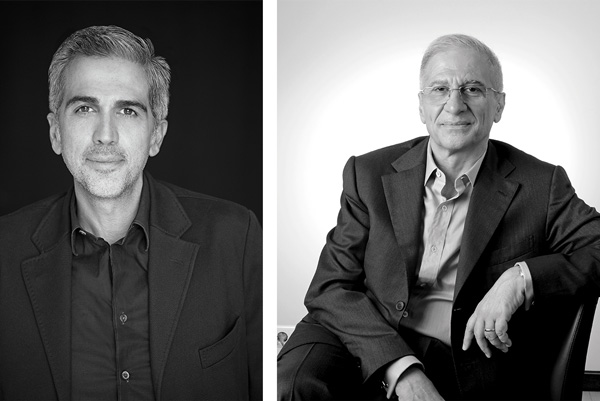 Considering it’s only fifteen years younger than Cartier, it’s amazing that the Lebanese, family-owned jewellery house of Tabbah is not more widely recognised. Of course, this has much to do with the nature of their business – quietly creating one-off haute joaillerie, often for international royalty.

If you were a silent observer next to me, you might think Nagib Tabbah is a composer. The way he expresses himself animatedly, with his long, nimble fingers, it’s as if he were creating a symphony. But what he’s actually doing, is drawing jewellery designs in the air.

A lean man with salt and pepper hair, he is dressed smartly in a charcoal grey suit, which helps keep the focus on the matter at hand. Tabbah is explaining how a particular one-off came about. “Most of our work is bespoke,” he says, “which is exciting because it’s like a blank page every time.” Due to client confidentiality, he cannot show me many of these designs, so instead, he describes a few using precise gestures.

“Sometimes, I’ll create a piece of jewellery without even seeing the person it’s aimed for. There was a friend of my wife’s – I didn’t know her – who’s a sportswoman and wanted a necklace for a celebration on her competitive sailing boat. I told my wife that I wouldn’t know where to start without seeing a picture of her first.” 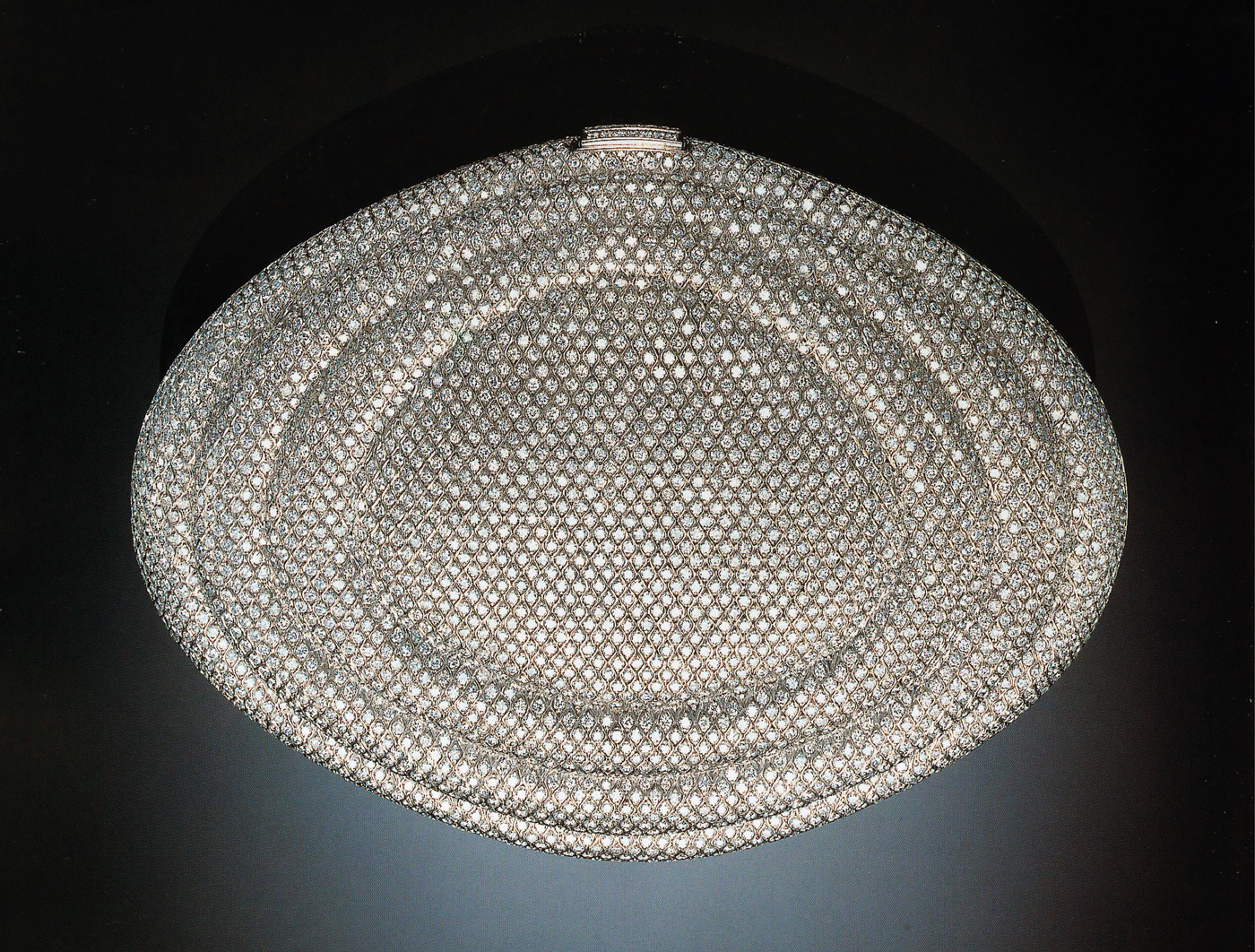 Set with 5,873 pavé diamonds, this 18-karat white gold evening clutch, made for Mona Ayoub, has a ribbed oval form and a diamond push-piece opening that reveals a grey suede interior, complete with a mirror.

So she sent one. “You know the internet was very slow in those days, the picture appeared in layers, first the chandelier, then her hair, eyes, and so on. I drew a single wave around her neck, and held the ends together with a diamond in a shape of a boat, at the base.” Both exquisite and clean in structure, this necklace was designed with just a couple of strokes of his pen.

There was another wave motif that gave Tabbah a lot of international exposure and that was the Infinite Cascade, which he made for Princess Charlene when she married Prince Albert of Monaco three years ago. Worn during the evening concert reception following their civil service, it is a stunning piece featuring six waves of 18 karat gold, set with 1,237 round and baguette-shaped white diamonds, at the end of which are six pear-shaped white pearls. It totalled 56.67 carats in diamonds and 143.76 carats in pearls. The inspiration came from the fact that the princess is an Olympic swimmer from South Africa.

“She’s from a place where two oceans meet and she loves the sea,” Nagib tells me, “I grew up in Monaco in the 1980s, you know. There was a lot of glamour around me, this was at a time where the only foreigners were Americans and Italians. I remember feeling that this must be what beauty is all about. Since then, I have always been able to close my eyes and go back in time so as to inject that sense of beauty into my pieces. It’s my personal time warp.” Nagib adds that he designed the piece to convey what Monaco represents as well as to flatter the princess’ prominent collarbone. “The way I see women is probably similar to that of a couturier,” he admits.

I HAVE A BOX FILLED WITH 20 YEARS’ WORTH OF WAX MODELS THAT NEVER MATERIALISED. LIKE GOOD WINE, JEWELLERY NEEDS SOME TIME TO MATURE.

Nagib’s dark eyes shine beneath his glasses as he waxes lyrical about his creative process. “Every piece begins with a story, with a strand of hair, with an image. The story dictates the form, though I don’t think I can put words to the creative process. I absorb everything and it is a mystery when it comes out. You just don’t know where it comes from, when you make something that hasn’t been done before. But I can say that I don’t think creation is a painful process, as people say. It’s purely emotional and when you start to be rational, you lose the soul. You see, once the piece is born, you have to give it soul, and that’s everything you’ve got.” 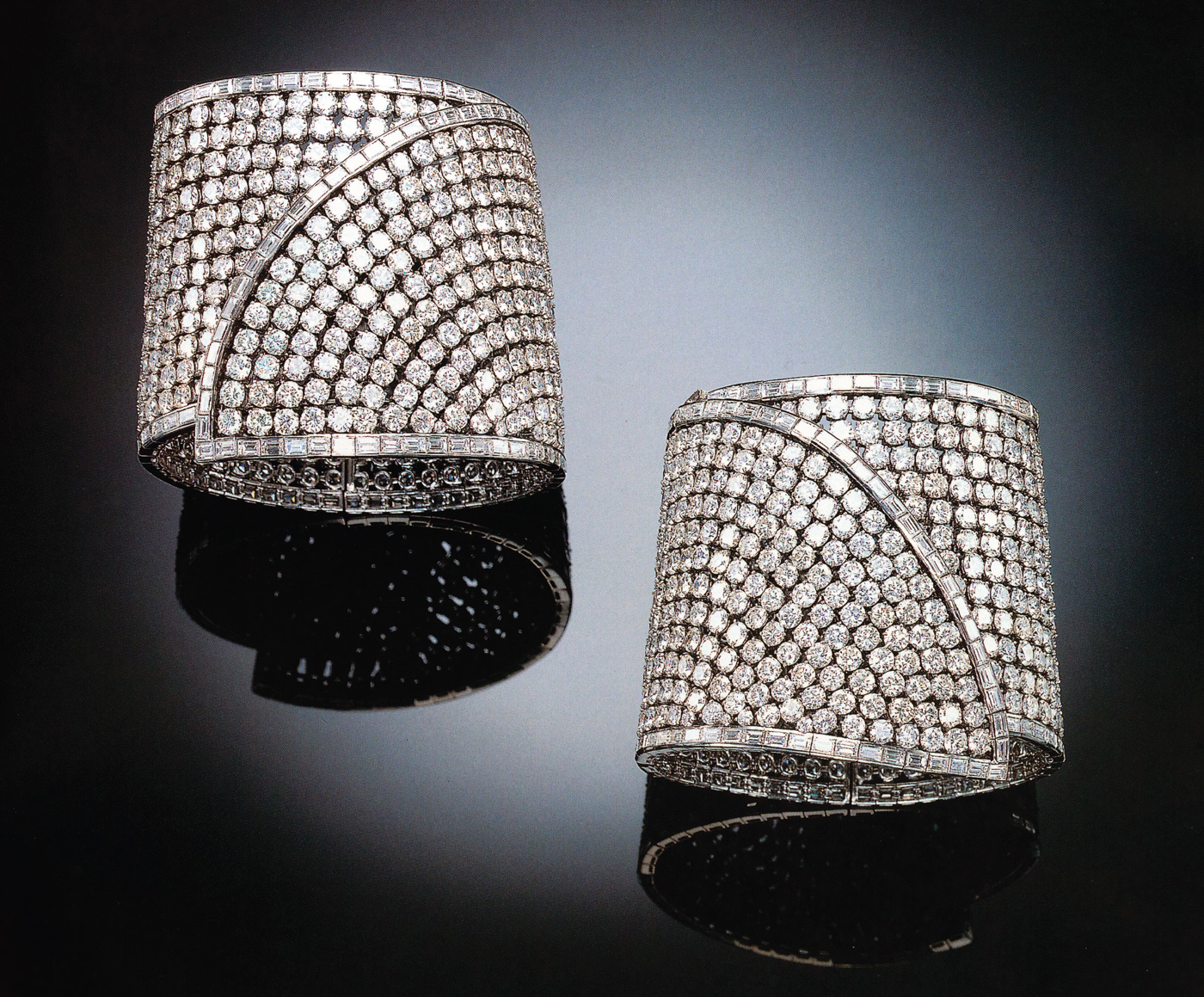 A vibrant homage to the Art-Deco period, these twin cuffs were made for Dr. Nasser Al Rashid, as a gift for his wife. Nabil Tabbah’s intent was a sculpture-like piece, inspired by diamonds, with a timeless appeal that would represent fine art as much as fine jewellery

Impassioned and charismatic, Nagib is one of those artists whose presence is overwhelming, in a good way. “I don’t think I ever woke up one day and said this is what I want to do,” he reflects candidly, “it’s a bit like falling in love, you are slowly drawn into it. You start by loving the stones.” And truth be told, Nagib grew up around stones.

“I remember the first time I held a 250 carat cabochon (a gemstone that is shaped and polished as opposed to faceted) in my hands, when my father took me to Geneva. I must have been 13,” he says. “I also remember my first encounter with melting gold, it was so profound. Or watching artisans working on a piece, have you seen that? Their focus is remarkable, it’s like nothing else exists. I also remember sitting on my grandfather’s lap as he would show me his drawings.”

The Tabbahs have been in the business of making jewellery for five generations, since 1862, when Nagib’s great-great-grandfather, Joseph, founded the business. “Our ancestors in Zahleh were at the crossroads of the northern silk route, at the cultural intersections of merchants, pilgrims and warriors. At first, they engraved wood for silk printing. They engraved the kinds of geometric and floral patterns you see here,” Nagib says, pointing to the wooden screen decorating the window of his office.

His lofty office draws much from the 19th century with its marble columns, elegant Murano chandeliers, antique fireplace and Louis XV-style gilded mirror. Set to the side of the brand’s brand new flagship store in downtown Beirut, it’s also thoroughly modern. Nagib explains that they tried to recreate the look and feel of his family’s original boutique that once existed in Bab Idriss before the Lebanese civil war (which forced him and his family to move to Monaco and then Switzerland).

“You know it’s funny, our family name, Tabbah, which means printer, came with our trade,” Nagib continues, “There was a shift from working with wood to silver as silk began to be imported and then it was a logical progression to move to gold. The French and Belgian nobility would come to Lebanon by boat to get their signets from us – we became their goldsmiths. Then, we started setting the stones and became jewellers.”

I ask Nagib how Tabbah’s standing with European royalty expanded to Middle Eastern royalty since it is well known that they are private jewellers for the Al Saud family. “In the 1940s, there were no jewellers in this region and when the Al Sauds asked who were the best, they were told about us.” In 1957, HRH Abdul Aziz Al Saud gave then-US president Eisenhower a Tabbah sword set with precious stones. It’s now on display at the Washington museum. “It’s funny my grandfather didn’t even know that it ended up in a museum until he saw it by chance.”

After graduating from the Gemological Institute of America in New York, Nagib returned to Beirut to share responsibilities in the family business with his father Nabil. “My father is more sculptural in the way he builds his pieces, it is more mathematical. You could say he is the architect while I am the storyteller,” he says. “ There is synergy though as we complement one another very well.” 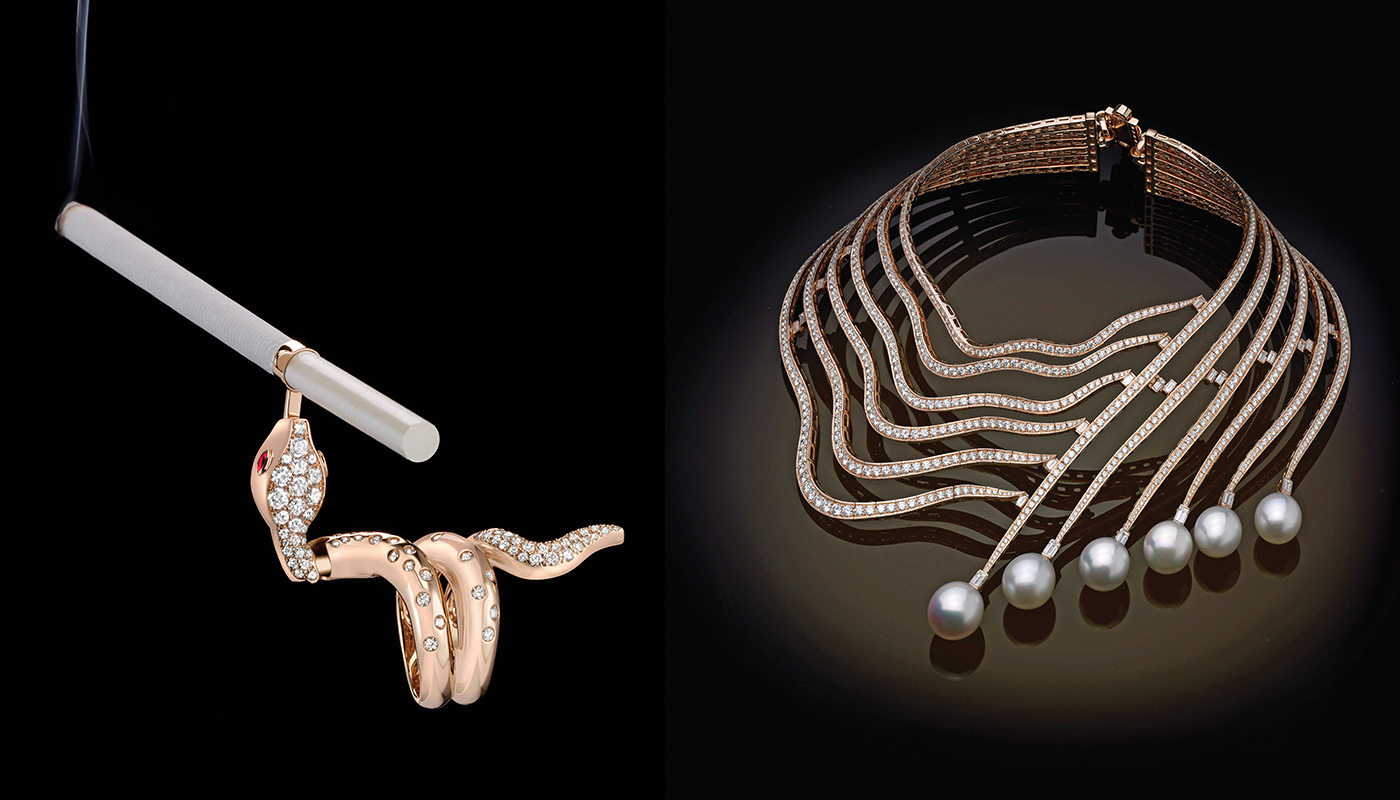 LEFT: Smoking Naked is a stunning revival of the dandy smoking ring, but with a contemporary twist: it is transformable. So while it might be able to hold a cigarette in the ideal position for smoking, it’s also wonderful in its own right as a serpent ring. RIGHT: The ‘Infinite Cascade’ necklace designed for Princess Charlene of Monaco.

Nowadays, Tabbah’s workshop has over a hundred artisans, and the entire production process, from designing to setting, cutting to polishing, is done in-house. “This is the only way in which we can guarantee the utmost secrecy and exclusivity for our clients since everything is done under one roof, we set the stones in our workshop, so we can verify their source and apply the same exacting standards to cutting – we have a secret rule of proportions at Tabbah, it’s like a formula.”

“As for the stones, I travel the world to choose them by hand – diamonds, rubies and sapphires – and often, I’ll say a hundred no’s for a single yes,” says Nagib. “I have to feel a connection with the stones I buy. It’s actually easier for me to express what I don’t like than what I do. For example, I don’t like black diamonds, as they don’t shine – they’re glorified carbon. What I look for more than anything, is colour and beauty.”

As Nagib begins to show me some pieces they created that were auctioned off by Christie’s in 1997, his father, Nabil, enters the room. “These were for Mona Ayoub,” explains Nabil, “who was married to Dr. Nasser Al Rashid, one of the richest men in Saudi Arabia. She had asked the wife of the late King Abdallah about where she could have jewellery made and was referred to us. They are almost baroque in style, with a lot of pearls and this clutch we designed is quite unusual, it’s completely covered with diamonds. Her husband later came looking to get her a bracelet. I said why not two?” The twin cuffs, lined with diamonds, turned out to be highly sculptural, just as Nagib described. Art Deco-like, they curve in a geometric double bind around the wrist. Nabil frowns slightly at the images he is showing me, “The pictures here are very flat in comparison to the real thing.”

I ask Nagib if that is why he draws, to render a dimensionality to a design before it comes into being. “I actually learned how to sketch for another reason, out of frustration of not being able to express things in words for our designers to understand,” Nagib responds. “We don’t use computers, it is all hands-on. And I travel the world with just this sketchbook and a pen.” He shows them to me, adding that not all of his sketches become jewellery designs in the end.

“I have a box filled with 20 years’ worth of wax models that never materialised. But if you are a proper jeweller, time is on your side,” he says, laughing heartily. “Like good wine, jewellery needs some time to mature.”