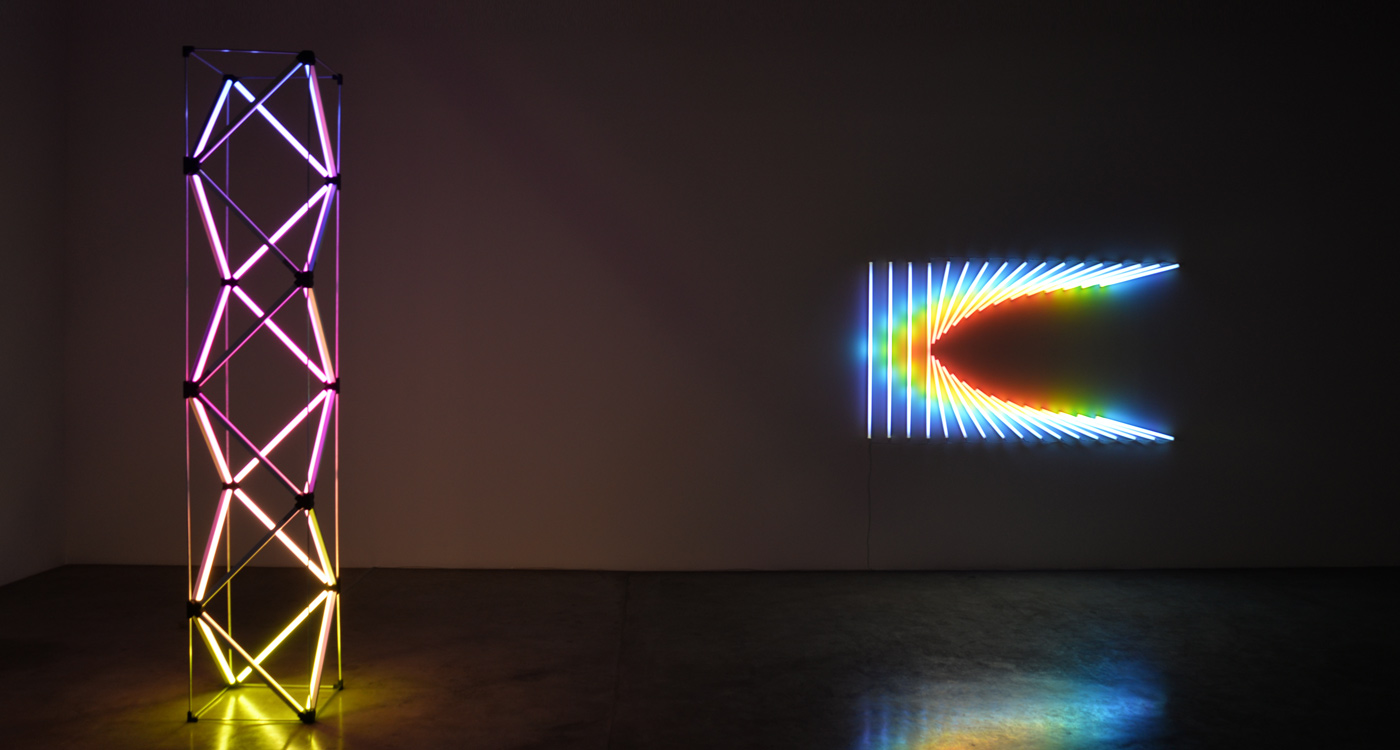 James Clar emerged in Dubai as a prominent figure in the contemporary art scene, building his reputation as a creative master of neon light and technology. Now based in Brooklyn, New York, the artists’ star is rising as he capitalises on a generalised hunger for conceptual works that meld art with design. 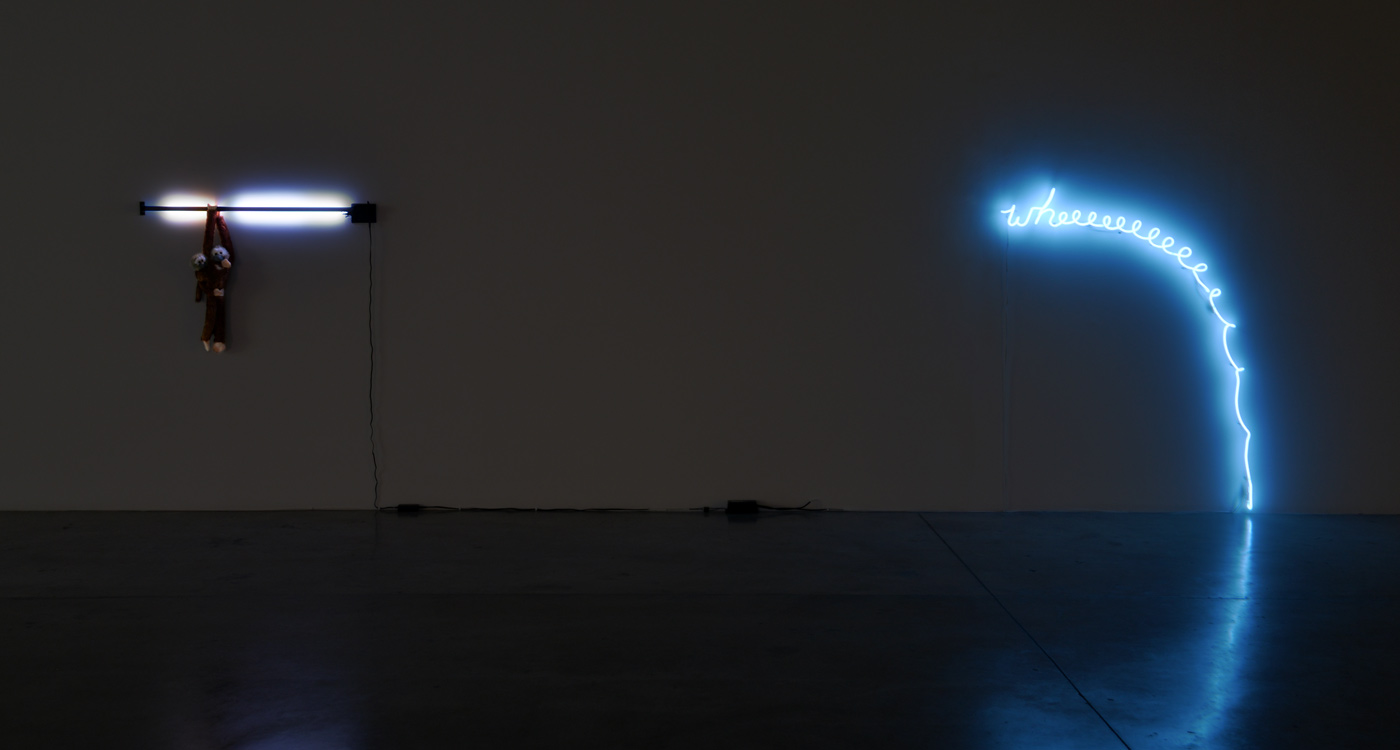 At first glance, it’s not immediately apparent where James Clar’s work abandons design for art. Often attributed the gangly label of ‘new media art’, Clar’s wall-mounted installations offer thin, neon symmetries and silhouettes of static or pulsing fluorescence. His credentials as an artist are further challenged by the fact that Clar segued from light designer to artist in Dubai – a city known more for its architectural orgasm of glib aesthetics than any seismic contribution to the global art discussion. The 37-year old calls foul on such charges. “You cannot compare Dubai to cities like Paris and New York,” he says. “They have been around for centuries. In Dubai, it was great to have a blank palette to start from.”

On sight, Clar’s expositions on science (‘Space is a Hologram’, 2014), dreaming (‘One Minute Dreamstate’, 2012) or nature (‘Waves with Sunset’, 2012) feel like they’ve been designed in California and assembled in Dubai, but with a twist. Short of a bitten apple decal, his tie-dye, neon geometry is too clean at times, and like the comparison’s products, amenable to fuzzy talk on just how pleasing it all is to the eye. With all the funky luminescence on stark white walls, and even a disco ball in one work (‘Dance Therapy’, 2012), there’s a ‘lounge by Daft Punk’ sensibility to his exhibitions. Appositely, you wouldn’t be surprised to find the electro DJs lounging on a bleach white sofa, filming Clar, filming them. Looping video, sound and film is a method favoured by the artist, evincing more dimension to Clar than all the visceral pizzazz lets on. “It’s about how information systems skew or alter our views of reality,” says Clar from his light-filled studio in Brooklyn. “I think of the lights I use as pixels that I can manipulate in three dimensions so they become sculptural.”

A central contemplation for the artist is how we consume artificial light sources from screens for information, interaction or entertainment. He distills these signals across film, tubelights, acrylic boards, Raspberry Pi, credit-card sized computers and video. The consolidation of man, machine and consciousness, is a signature pre-millennial film buffs will also recognise in ‘Existenz is Paused’ (2014) and ‘The Lawnmower Man’ (1992). In ‘SEEK (2014)’ we see a microphone attached to a computer hard-drive birthing new technicolour visuals and sound through a screen. ‘Teleported, Pixelated, Digitized’ (‘The Vanishing’, 2015) ostensibly demonstrates a person assimilating into the light and digital world, represented finally by the colour swatches on his Nikes, at the top of a ladder. “The aesthetic is relayed back into the concept,” says Clar. “Everything is about computerized reality – pixels, natural phenomena and lighting from an aesthetic point of view. Painters have their own visual systems; I’m applying my own to light sculpture.” Clar has also skirted politics in a country that sidesteps open controversy. His work ‘Little Boy in the Desert’ (2010) as a play on the mirage that was the goose chase for nuclear weapons in Iran, is wonderfully artsy with its twisted, reflected metal on sand. At other times, his works feel somewhat literal. ‘The Difference Between You & Me’ (2010) shows Al Jazeera and Fox TV newscasts bump uglies and make a light baby through a piece of acrylic. Diptych (2012) – a Bible and Koran with interlocking pages, and Oil and Water (2012) also leave little to the imagination. I ask him about critique during his Dubai days. He suggests critique wasn’t so explicit. Now back in New York, where he grew up, Clar hopes to immerse himself in “a new environment”. 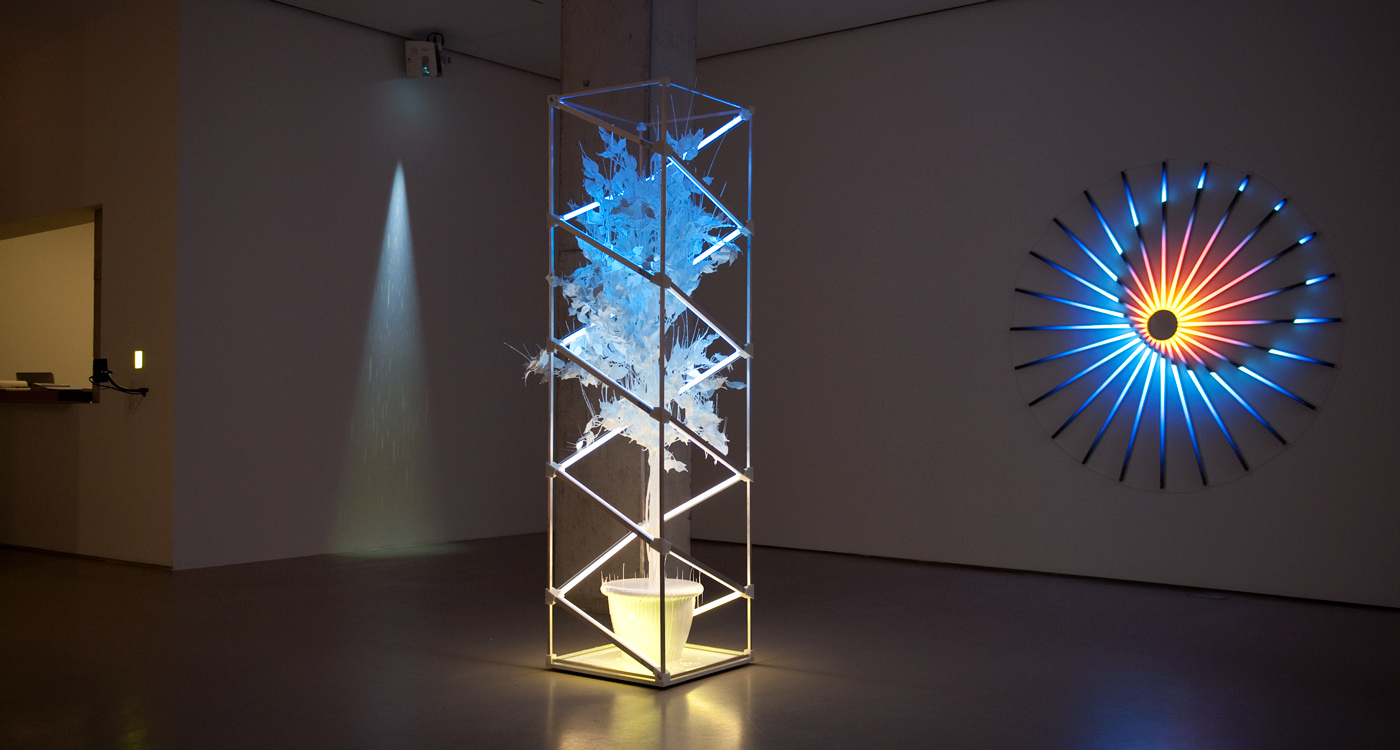 Tree (2016) is a freestanding sculptural work representing nature as a holographic simulation. Two Times One Sun (2013) is the sun as seen from two different points on Earth

In a career spanning just over a decade, Clar has exhibited with MoMA PS1/ Honolulu Biennial “Rockaway”; created an over eight-storey high permanent installation at Frankfurt airport (‘Synesthetic Timeline’ 2013); and apparently had one of his works – ‘You & Me’ (2006) – ripped off by popstar Rihanna in her video, ‘Rockstar’. He’s now suing her for over 4 million USD. Not bad for a kid who got his start in Dubai’s maligned renaissance at the turn of the century. Presently, the artist is booked up with commissions till the end of the year, not least with a permanent installation at a suitably hipster, museum-themed hotel which was once a Ford Model T assembly plant. As inspiration, Clar mentions two towering figures in the world of light and multi-media art: Dan Flavin and Olafur Eliasson. While the first was a complex man, arguably imbuing deep symbolism to his light art, he ultimately said of his oeuvre, “It is what it is and it ain’t nothin’ else,” eschewing any other meaning hacks tried to attribute to them. Eliasson has also demonstrated a whimsical side, but to understand him is to attempt abstraction on a scale
sometimes as monumental as his towering installations. What James Clar has on his side is time, and the enviable advantage of interest from collectors and galleries around the world. What he does with it, and what will ultimately set him apart from his contemporaries, remains to be seen.