People | Culture | Musician Faris Badwan is Provocative, Unconventional and Marches to the Beat of His Own Drum 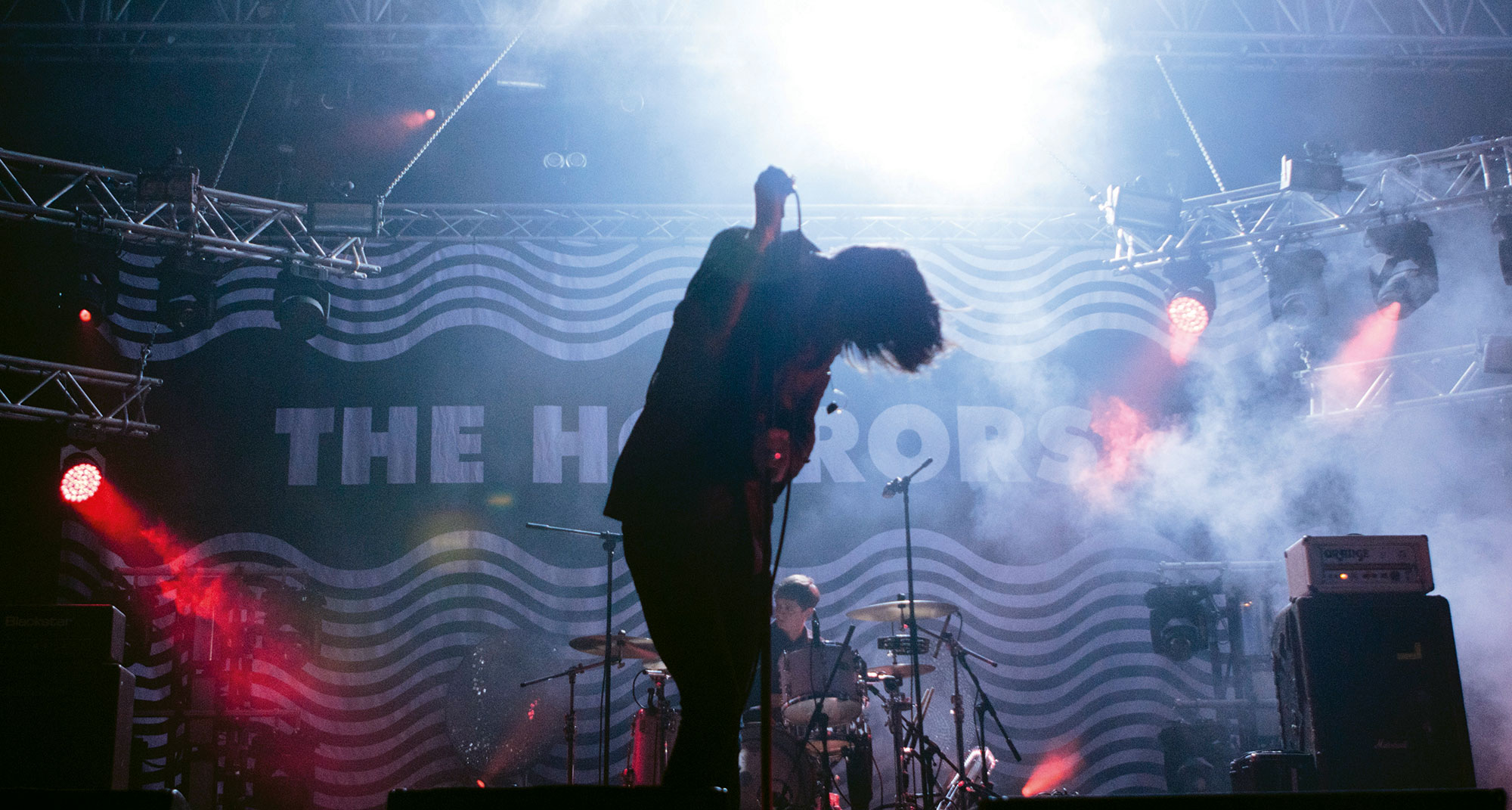 Musician Faris Badwan is Provocative, Unconventional and Marches to the Beat of His Own Drum
December 1, 2017 Ramsay Short

If you happened to be looking for a rock archetype you’d be hard pressed to find a better specimen than Faris Badwan. The lead singer of hard-to-describe British five-piece The Horrors, is a sort of Gothic Mick Jagger with more swagger – tall, thin, a big mop of black hair framing his boxer’s nose and wide intense eyes.

“An interviewer recently described me as a 2-metre Marjane Satrapi illustration come to life, but last time I checked I am skin and hair rather than ink and paper… but who knows, I don’t want to rule anything out in the future,” he tells Official Bespoke over the phone from Slovenia where The Horrors are currently on tour. “Right now I am sat in a shower stall by the way because it’s the only quiet place in the building.”

Born in the very English Kent town of Bexley to a Palestinian father and English mother, Badwan’s childhood dream was to play football in goal for Blackburn Rovers because he just wanted to be like all the other kids. He’s a still a big fan today: “A quick glance at the League One table will tell you that times are hard for Blackburn unfortunately. But I’ll support them for my whole life.” By his late teens it was all about the music though. His original stage name when the band launched their 2006 debut ‘Strange House’ out of Southend-on-Sea was Faris Rotter, and he would roam and still roams around the stage, a towering stick-like figure, stage-diving and commanding the crowd’s attention. 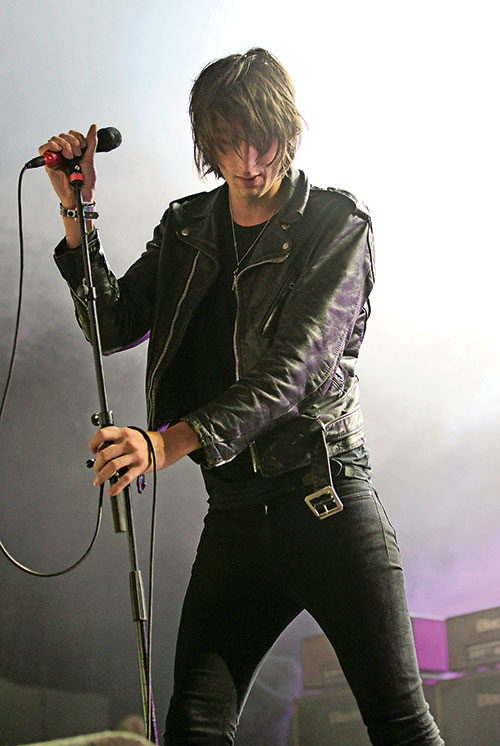 Following the release of his band’s fifth album, Badwan’s on his way to becoming a household name.

Back then, he says, “We couldn’t play but that’s why we enjoyed it,” – the music under the banner ‘Psychotic Sounds for Freaks and Weirdos’ was a chaotic fusion of 1980s Gothabilly and Sixties Garage rock, all violent energy and famous 15-minute gigs.

“When we began it was so instinctive and there was no thought beyond our next show. It was a raw release of energy and it was a while before we discovered subtlety,” he says. “I didn’t really have any preconceived ideas of what being in a band might be. I was thrown into it with no preparation. When I was a kid I thought people in bands had to be total masters of their instrument in a conventional way and that they had to have had lessons all their lives. And then I started listening to garage and the Mc5, and all the New York punk bands. At 19 I read the Simon Reynolds book ‘Rip It Up and Start Again’, which gave me loads of ideas.”

Introspective Krautrock and what’s been described as neo-psychedelic shoegaze was the marker of their second album ‘Primary Colours’, a move away from their more furious, fast and punky noise. Two more albums – ‘Skying’ and ‘Luminous’ – were to follow, and now comes ‘V’, a record Badwan sees as the culmination of their musical journey so far, The Horrors’ darkest yet most accessible record to date. “I thought the V [of the album title] was a fuck-you,” Badwan says. “A bit of a ‘fuck-you, we’re back’.”

It’s a powerful, soaring and quite different album produced by Grammy and Oscar-winning man behind million-sellers Adele and Coldplay, Paul Epworth, an album likely to push 30-year-old Badwan’s public profile into the big time.

“V is a risk but life isn’t much fun without risk. It’s the antithesis of being creative if you know what you’re going to be doing every time,” he says. “I feel as if the more records we make the more possibilities there are.”

It’s no doubt a reason why Badwan formed his other band, Cat’s Eyes, with girlfriend, multi-instrumentalist and opera singer Rachel Zeffira. Their blend of drone-rock is something entirely unique and some of the band’s videos are eerie in the extreme – 2016’s clip for ‘Drag’ for one, shows the pair violently and bloodily beating the crap out of each other and makes for uncomfortable watching. The song, naturally, is about a bad relationship. “We’re currently working on a soundtrack to a new film.”

Badwan has always been alternative – quite removed from his brain surgeon father and nurse mother though he says they were always supportive of his music career. He paints as well as makes music and his lyrics and song-writing are equally unconventional.

“For me and probably a lot of people who write or paint, it really feels as if there’s no option. I write without intending to a lot of the time – random ideas come into my head that I note down and develop later. I think it’s crazy how sometimes the starting points for your most useful ideas can come from nowhere, just a throwaway thought you wrote in your book while half-concentrating.”

His two acclaimed bands and a dizzying output of painting and drawing – Badwan studied illustration at Central St Martins – suggest he’s being a little modest. As for the life touring, it’s something he savours.

“The best place we’ve played? I don’t really think there’s any point in having a huge leader board of countries, but I always love going to Mexico and recently I really enjoyed our time in Gothenburg. We went to a techno club after the show and they let us use the lasers and strobe lights for three hours,” he says. “We’ve never played in Palestine. I’ve visited many times but most of my close relatives have left. I guess if there was the opportunity then I’d love to play there.” 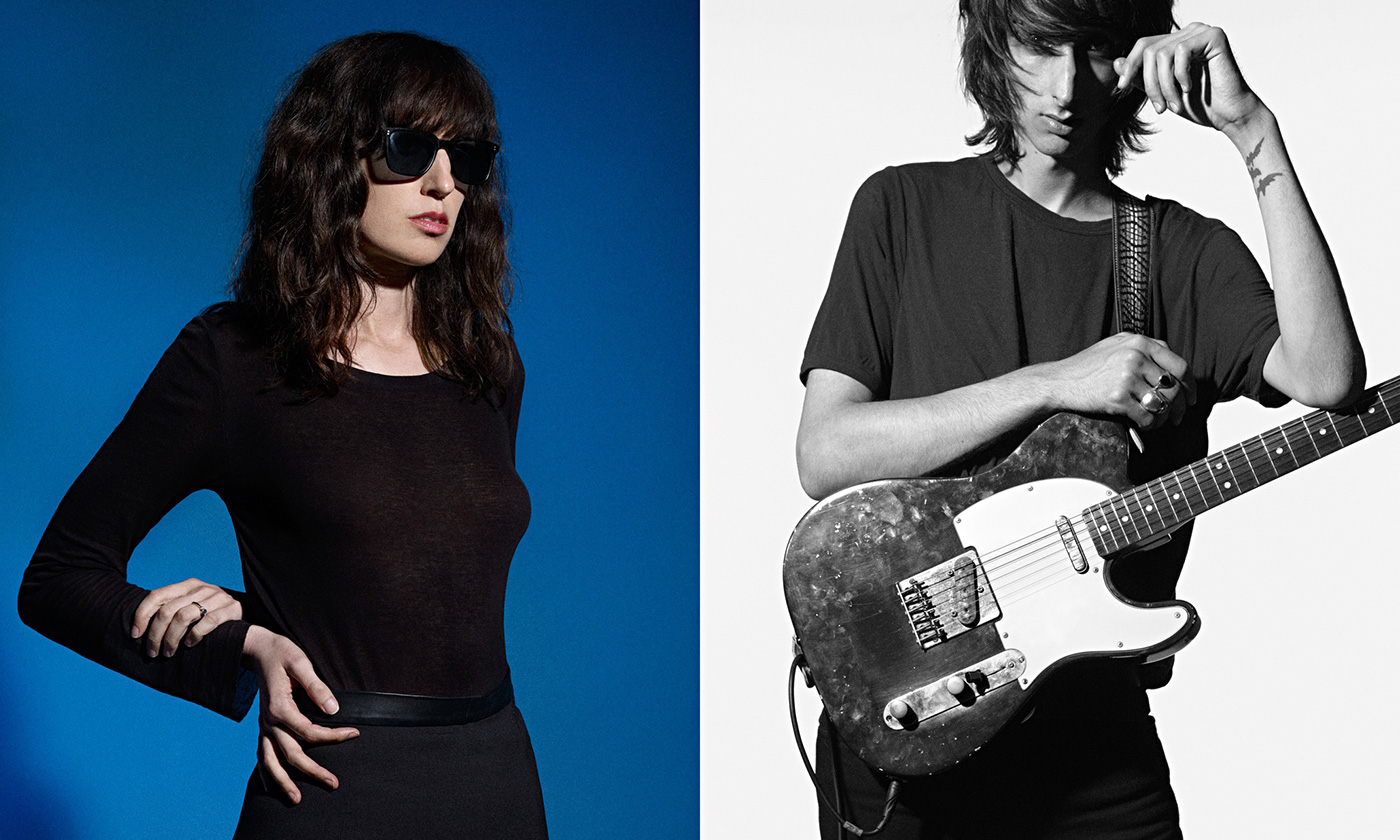 Formed in early 2011 by Badwan and his Italian-Canadian soprano girlfriend Rachel Zeffira, Cat’s Eyes is a verydifferent (and much more compellingly pop) outfit to The Horrors.

As for how his Middle Eastern background has affected who he is, Badwan is circumspect: “Everything affects what you make or makes up who you are. It’s something I think about a lot but it’s not for me to say. Maybe a question for a psychologist.”

As well as music and art, he’s got a passion for leather jackets acquired while watching Marlon Brando in ‘On The Waterfront’ and 1983’s ‘The Outsiders’: “I was always into gang imagery and nothing symbolises that more than leather jackets. I own about 15.”

But ultimately it’s the music and the urge to get better that drives him. “I’m driven by the desire to improve. If I’m constantly improving then I’m happy,” he says. “I think chasing success and comparing yourself to others is the easiest way to send yourself mad.”

With ‘V’, the conventional limits of the three-minute pop song are rarely respected. On many of the tracks, just when they feel like they are coming to an end an epic and grandiose coda kicks in prolonging the song further. ‘Two Way Mirror’ is a good example.

“I always find it satisfying,” says Badwan, “in a slightly sadistic way, when we’re playing live, and a song drops down and the audience claps and little do they know there’s actually still seven minutes left.” We’re sure they don’t mind, Faris.