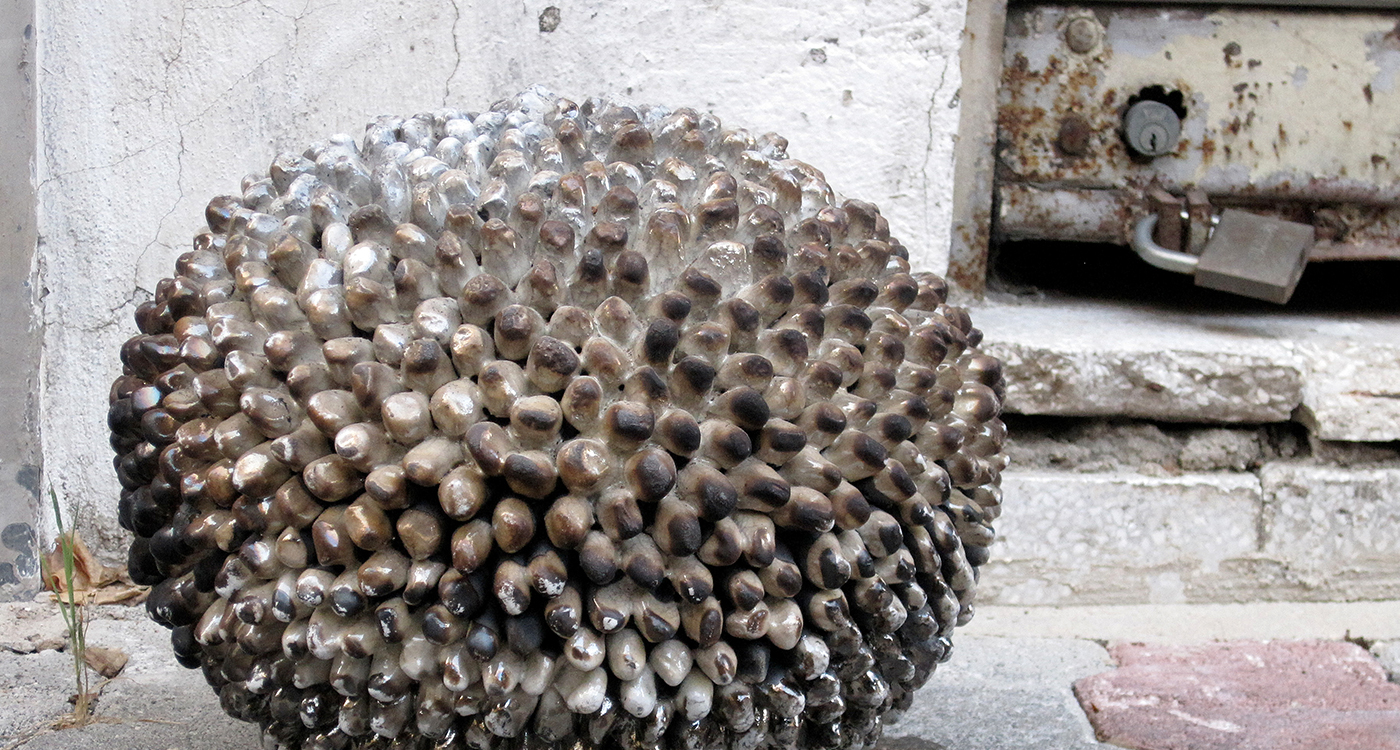 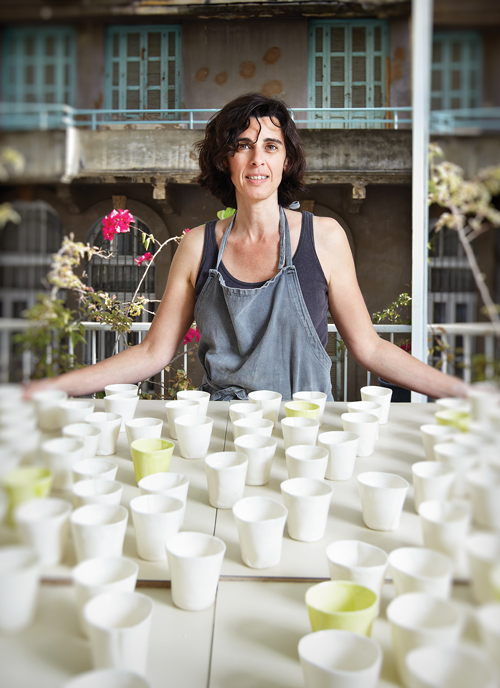 Nathalie Khayat’s studio isn’t especially quiet. Just down the road from the post office on Sassine Square in Beirut’s Ashrafieh, it opens onto the city’s soundscape; the dull roar of traffic, squealing tyres, honking horns, the drill of construction, passing conversations, the cries of street vendors, all the ambient sounds, in other words, of contemporary Levantine urban life.

In October 2012, it was also open onto a less palatable contemporary Levantine reality – the massive car bomb that claimed the lives of nine people, amongst them the target of the attack, Internal Security Forces Brigadier General Wissam Al-Hassan. In a flash, literally, Khayat’s workspace – and less replaceably, her personal collection of ceramics built up over several decades – was pulverised. It was only thanks to the fact that the potter and her son were sat with their backs to the windows that they weren’t more seriously hurt.

Two years later, her studio completely rebuilt, the only reminders of that horrific afternoon are the blast splatter pattern on the wall of a facing building and the now absent row of venerable Ficus trees that previously dominated the view.

Khayat greets me at the door with a sparkle in her eyes and the faint sheen of dried clay ghosting her fingers. We walk into her light-filled studio, which is a repurposed flat in a 1960s apartment block. To the left, neatly labelled shelves of as yet unfired work made by her students, run along the wall. Once a week, in a concession to community, Khayat and her studio partner Neville, teach three classes, back-to-back. To the right, in the second room of what would have been the living room, two rows of Japanese electric potter’s wheels sit. Protectively bagged and expectant, their stools balanced on top, they wait silently for the next class.

In the rear bedroom down the hall, the electric kilns that Khayat uses while she’s in the city sit in triptych by the window. In the second bedroom next door are tools and equipment, as well as bags of heavily-perspiring silvery brown clay imported from Canada. There are also a number of Khayat’s post-explosion pieces.

I AM MUCH MORE INTERESTED BY WHAT HAPPENS BETWEEN THE PORCELAIN, THE WHEEL AND ME, JUST PUSHING THE CLAY TO ITS LIMITS, TRYING TO SEE WHERE IT WILL GO. 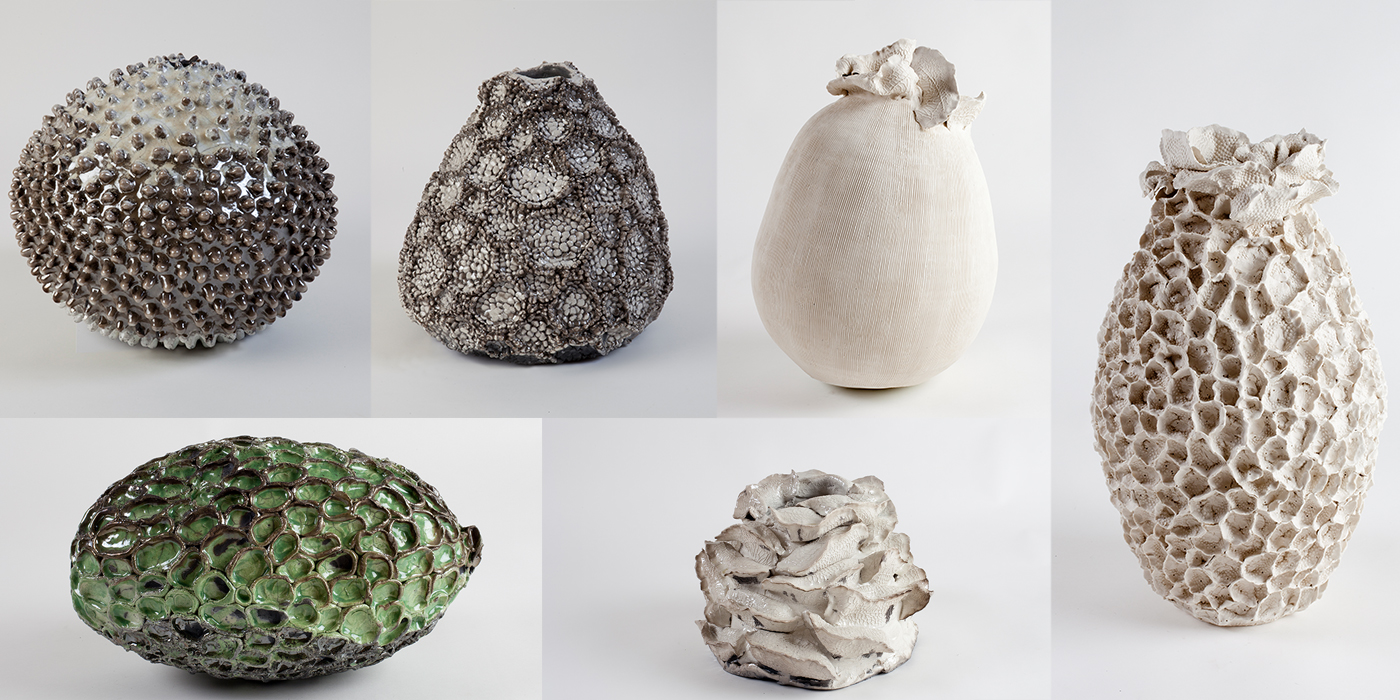 This is a collection of bowls, serving dishes and vases, spiky, bulbous items that are as much sculpture as they are vessel, some glazed, most not but all delicately and sensuously misshapen, here a ragged, unfinished edge or a lopsided lip, there a constellation of burn marks or a hint of baked clay peeking through the sugary glaze. 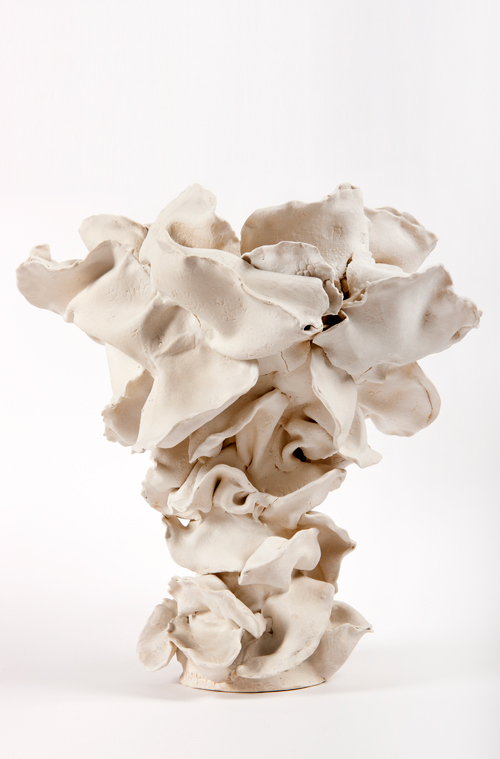 “I like to leave the accidents,” she tells me, as we leaf through photos of her work a little later, “I am interested by that, by asymmetry, irregularity.”At this point, it will come as no surprise to learn that when it comes to inspiration, Khayat’s eyes are upon Japan, the country that has turned irregularity and asymmetry into an art form. What is surprising, though, is that she chooses to express her earthy aesthetic in a rarefied medium better known for a pursuit of perfection bordering on the prissy; porcelain.

Think Delftware. Ming vases. Jeff Koons. Those hideous figurines of shepherdesses and cupids, so beloved of the middle, Middle Class. Tightly painted. Overly smooth. Impermeable. Aloof. Cold.
In Khayat’s hands, this stiff material becomes spirited and for all its immobility, lithe. Warped and imperfect, it exudes a warmth, a personality that is entirely unexpected. For the most part her pieces are raw and white. Unconvinced by the glazes produced in electric kilns, she has largely eschewed colour, though the recent acquisition of a custom-designed gas-fired kiln, lodged up in her mountain hideaway since last December, means that she will soon start using it again. They are also sophisticated and arresting, imbued with a fragile brutality.

“I like to work on function, plates and bowls we use every day and at the same time, I don’t know how to qualify myself,” she continues, saying she isn’t sure whether she is potter, ceramicist or artist. “I don’t do big production. I’m happy to work directly with the client. I always work in limited series and when I make a bowl or a dish, it’s important I think of the function. My work has to give value to what will be served in it but also efface itself, at the same time.”

Recalling the way an austere white glazed dinner set of hers, embellished with a single gold line that I once ate off at a dinner party seemed so alive, it did everything except shimmy across the table, I laugh. Khayat smiles. “Well,” she concedes, “they should at least create a dialogue with what’s served in them.”

Whether it is one of those singular dinner sets or one of her larger, more sculptural pieces, all begin life in the same way, on the wheel. Khayat keeps her use of tools to a minimum, preferring to breathe life and motion into her work through her fingers, pinching, rolling and smoothing pieces into shape. Here too, the ceramicist likes to let fate play a part.

“I am much more interested by what happens between the porcelain, the wheel and me,” she says, talking of her process, “just pushing, pushing the clay to its limits, trying to see where it will go. At one point it will tear, or fall apart, perhaps in a nice movement that I will keep, that I freeze, by firing it.”

It isn’t entirely accurate to say that Khayat’s close call two years ago has been forgotten. Her recent work, a series she calls the Mushrooms, shown at PAD in London in 2013, are her first non-functional pieces (in that they do not have any openings and so are not true vessels) and reflect the powerful emotion and turmoil that resulted from the trauma.

However, it is fair to say that she has not allowed that experience to define or to deform her. Khayat’s response to the tragedy has been a turning inwards, not in passive negation but in active examination. For all the upheaval and destruction, or more accurately, precisely because of it, there is something profoundly contemplative about both the artist and her creations.

“For me, my work is inspired by landscapes, I can feel that in them. They are silent, very quiet,” Khayat continues, pausing as her phone, which has been anything but quiet, buzzing busily throughout our conversation, momentarily distracts her. “Their whiteness, there’s something very silent about it. I needed to find a place where I could find silence. This is why I say my pieces are landscapes. But they are inner landscapes. Simple shapes, very quiet. I would even say meditative.”