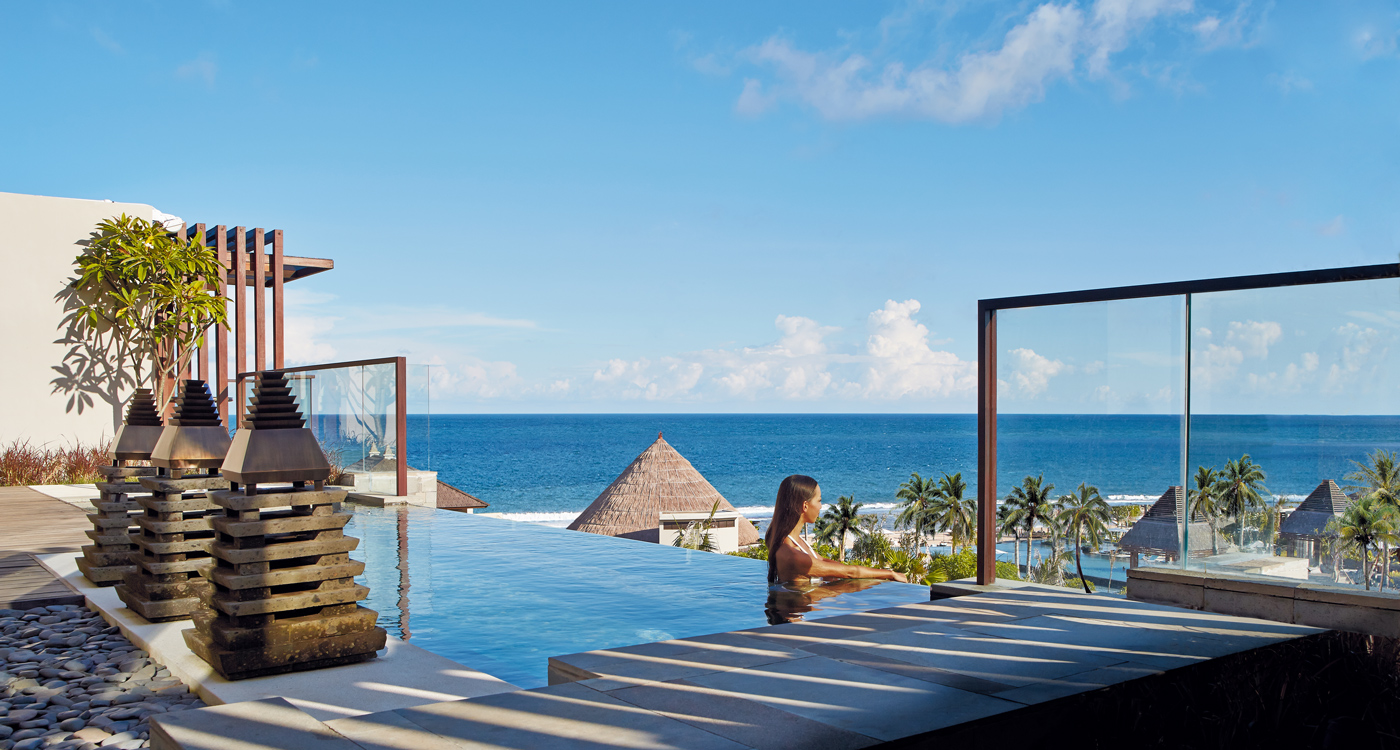 Indonesia is Ranked Among the World’s Happiest Places and Here's Why
June 3, 2017 admin

Indonesians are happy. In 2016, the Happy Planet Index declared Indonesia the 16th happiest country in the world. By February 2017, a report from the Varkey Foundation noted Indonesian youths were actually the happiest in the world. So there’s clearly a joie de vivre in this archipelago of islands but where does it stem from? And how is it possible that having so little can amount to so much? We needed to go to Indonesia and find out. 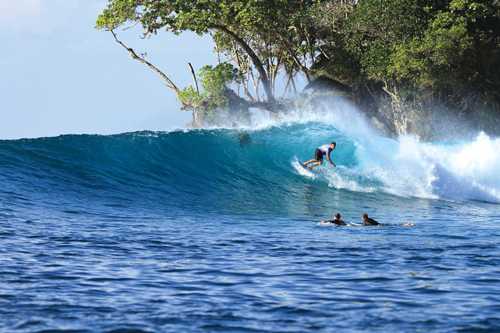 Kandui Villas is a luxury surf resort of 12 bungalows that caters to enthusiasts of all levels.

LIFE AT SEA
Our trip begins at sea. Indonesia has around 17,000 islands, so I hop on a boat with SeaTrek Sailing Adventures that will take me from Flores to Bali. En route we stop at villages and volcanoes, islands filled with Komodo dragons and fringed with red or black sand.

Occasionally boats of Indonesia’s nomadic sea people slide alongside our own, unfurling pouches of knick-knacks along the side. It’s a kind of maritime equivalent to trading at a land-based market.

“Westerners think of the sea as this empty thing,” says Peter Lape, Professor of Archeology at the University of Washington, one night over some cold beers. “But for Indonesia’s sea people, it’s the space they know. It’s their land.”

We arrive at Moyo Island. The day is hot and humid and mosquitos fly in on the scent of mud. Houses are made from timber, bamboo, thatch and fibre and put together with wooden pegs. (“They’re easy to take apart and load on a boat,” Eva Villagrasa, the SeaTrek tour leader, says.) Locals line the path, waving, and occasionally chatting. We hike up to a waterfall with a swing and we watch village boys fling themselves up, flip, dive, bodies small and strong. One grabs the rope and holds it out.

“They seem happy with very little,” adds Villagrasa. “I don’t know if it is a simple life, probably it is a difficult life, but they have nothing. And they don’t worry about what they don’t have. You see them smiling, playing, there’s a strong sense of family and community.”

Later in Lombok, a young woman walks us through rolling rice plantations and dense jungle filled with cocoa and coconuts. At one point she stops, grabs a leaf and breaks the stem. “Watch,” her eyes glint and she leans in, blowing gently. Three bubbles pop out and float in the sky. We laugh and she laughs and we try to follow suit, failing, but it doesn’t matter.

“There’s a simplicity in Indonesia of living in harmony with the tides and the seasons,” says Michael Travers, marketing and communications consultant with SeaTrek. “You just have to get among it and see that life doesn’t necessarily need to be complicated.” 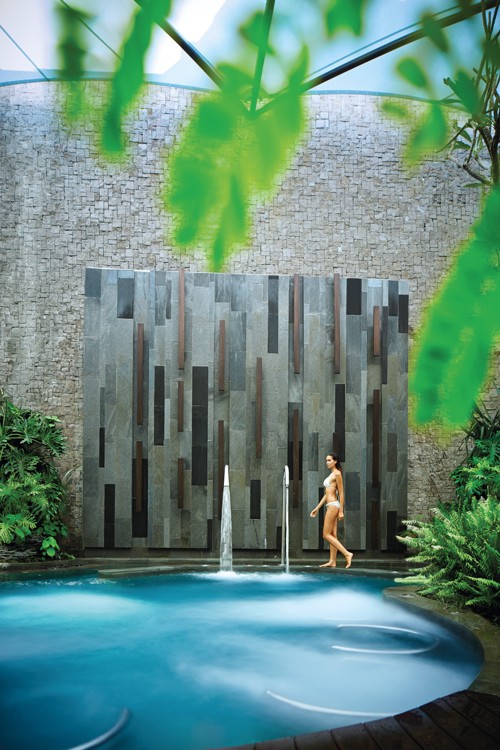 All spa treatments at the Ritz-Carlton Bali start with a unique water ritual in the exotic multi-station Hydro-Vital Pool.

THE BIG CITY
While Indonesia’s smaller, more isolated islands are cocooned in silence, elegant with simplicity, Bali buzzes with energy. This popular tourist haunt offers everything from temples on the hill (Uluwatu) to trendy oceanfront stops (Potato Head Beach Club) and five-star resorts (far too many to name) to surfer-shack hostels.
“In a way, yes, Bali has changed,” admits Lina Suryati, marketing communications manager for Katamama. We’re seated in a bar lined with the house brew, infused arak (the local spirit), while chicly dressed staff serve plates of Spanish-Balinese fusion food next door. Everything about the venue drips cool — and new.

“Sometimes if people forget, they put parts of their food aside before eating. It’s for the spirits of their ancestors.” It all comes back to harmony, Suryati adds. “Harmony with nature, with humanity and with god. It’s how they keep balance in their life.”

We try to find our own balance at a traditional soul purification. It’s hosted by The Ritz-Carlton Bali, a sprawling property in Nusa Dua that wraps massive villas around private pools. At 7am on the beach, a shaman sits beside us, chanting. He flicks water. He dabs our foreheads in rice, smears paste behind our ears, ties a rope around our wrists and drapes one on our toes for protection, flicks more water.

We find ourselves thinking of something Professor Lape had said days before: “I feel like such a neophyte here. Almost every day there’s something surprising or fascinating or weird. At the same time, it’s easy to connect with people instantly. There’s a real tradition of caring for strangers, of opening up.”

The shaman tells us to sip the water. We tip our heads and drink.

Later that week, we ask Ringga Salim, a Bali-based Java-born Indonesian, about the happiness studies.

“Indonesians are happy,” he concedes. Salim is showing me around the Four Seasons Resort Bali Sayan, one of two Four Seasons in Bali, this one in the jungle. Rice paddies line a river and everything, being inland, is green.

“Think of the philosophy of Indonesia,” adds Salim. “It’s eat or don’t eat, as long as we’re together, we’re happy. When they gather, they just chat through the meal. Even if they don’t have a meal, they can chat for days. We don’t complain a lot about life.” We visit a local market with a chef from the other Four Seasons, the Four Seasons Resort Bali at Jimbaran Bay, stepping over puddles while fish glint from many tables. The space is dark, roofed, and incense mixes with the salty scent of the sea. Then, back at the beachfront hotel, I help him cook. The fish is served beside heaps of rice and a coconut-infused dessert and we chat with other guests and the chef.

Katamama is a striking 57-suite resort built in the Seminyak region, adjacent to and belonging to Bali’s most famous beach club, Potato Head. From the outside you’ll find a red brick Brutalist edifice punctuated with light and shadow, but the inside is something else, encompassing lofty spaces lined with denim rugs, brightly coloured weaves, edgy Indonesian artworks and retro low-slung furniture.

A CHARITABLE FOCUS
Yet there’s another side to the beauty of Indonesia, one tied to poverty and scarcity.

“It’s not always an easy place to be,” says Professor Lape, who has been studying Indonesia for some 22 years. “People live very simply. But there’s a complexity to that too, managing fishing, farming, family, survival, indeed they have a good tolerance for dealing with tragedy.”

On the beautiful Sumba Island, luxury surfer-meets-honeymoon resort Nihiwatu is trying to help via the Sumba Foundation. The charity arm of the exclusive resort, Sumba Foundation is working to provide better water access through wells and pumps, better nutrition through school lunches, malaria prevention through a clinic and education, and assistance for pregnant mothers.

We walk through one of the traditional villages. Children stand beside stilted homes, giggling when we look at them. Four men play a game of cards, one with an animal jawbone dangling from his ear. Is there any electricity? we ask. There’s some. But no phones, no radio and no TV.

“With malaria, an important element of what we do is teaching locals they don’t have to accept the existing cycle of getting sick, then death,” says Kenny Knickerbocker, General Manager of the Sumba Foundation. “It can be treated quite easily.”

As we walk, two children follow us down the path. We clamber into the Jeep and they laugh, beaming, waving, offering a slow “Daa! Daa!” in goodbye. 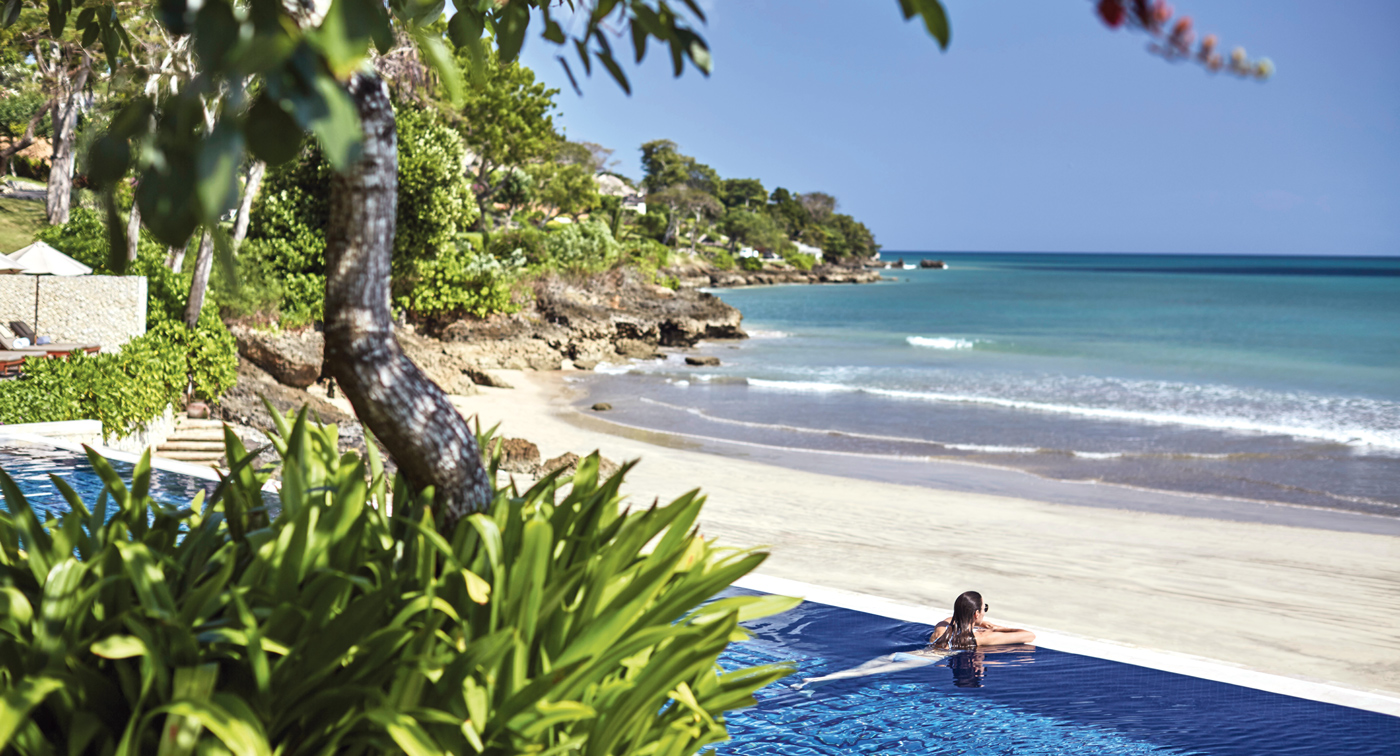 Designed in the style of a traditional Balinese village, the Four Seasons Resort at Jimbaran Bay offers guests a choice of 147 recently renovated villas and nine residences, all of which come with complimentary yoga classes, kayaking and catamaran sailing.

OFF THE GRID
More isolated than Sumba is surfer heaven Mentawai. We take two flights, a seven-hour ferry and a two-hour boat to reach Kandui Villas. Mangroves spill into the ocean, while crabs weave between coral on the beach.

“Some of the happiest people I’ve ever seen are in the jungle here,” says Jordan Heuer, marketing manager for Kandui Villas. He’s brown from the surf and his words mix with the sound of waves.

“The natives, the shaman in the middle of Suburu [a nearby inhabited island], they really don’t have anything except the jungle, but I haven’t seen anyone happier in my life.” Maybe, he muses, it’s because they have no need for money. They live simply. “The jungle is their supermarket. They hunt and gather and smile and laugh.” Family is crucial. Money isn’t.

“We live our whole lives worrying about money, stressing about money. But that’s not what makes them happy. They’re simply happy with life.”

Here, for the first time during our trip, we have no phone signal. Wifi is frustratingly slow. And we feel ourselves relaxing, unfurling into the easy island vibe we’d heard so much about. We might not have captured the joy of the Indonesians for ourselves — but surrounded by palm trees and silence, it’s not hard to imagine how we might.