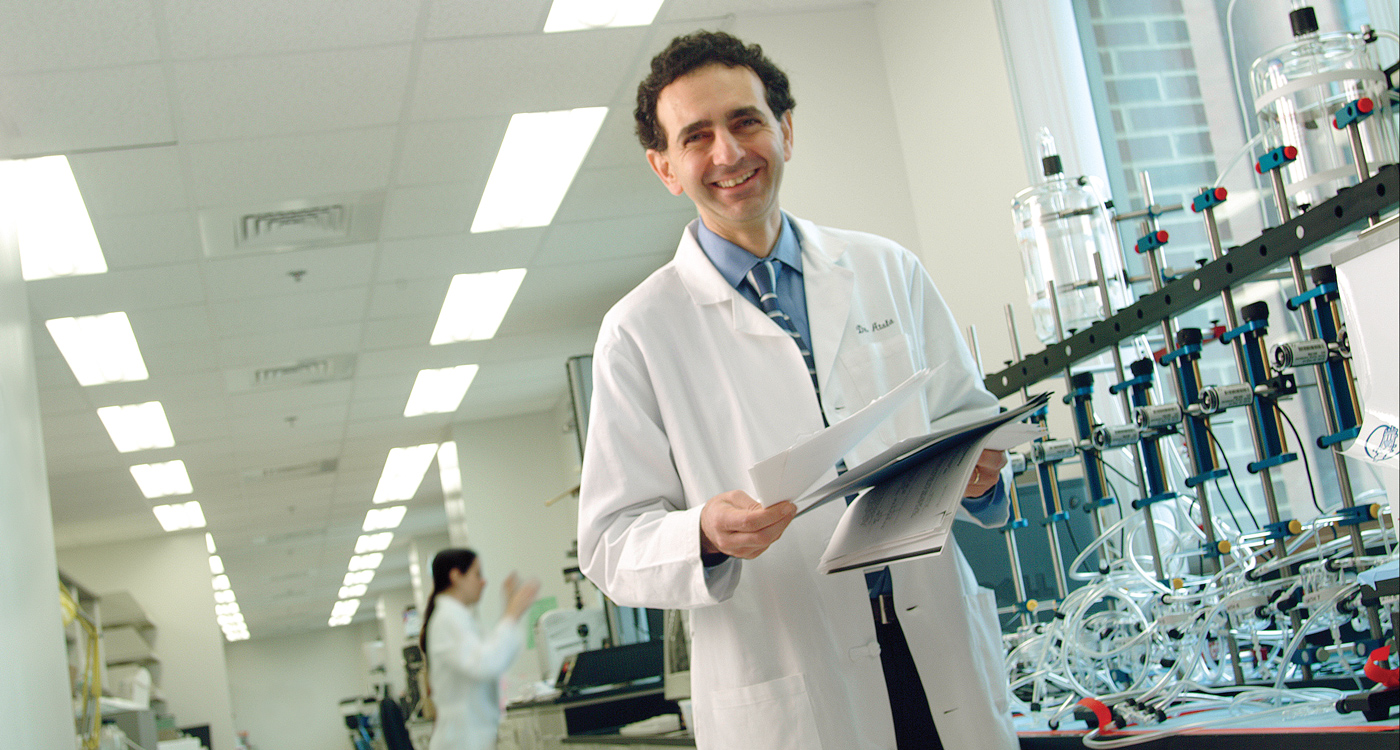 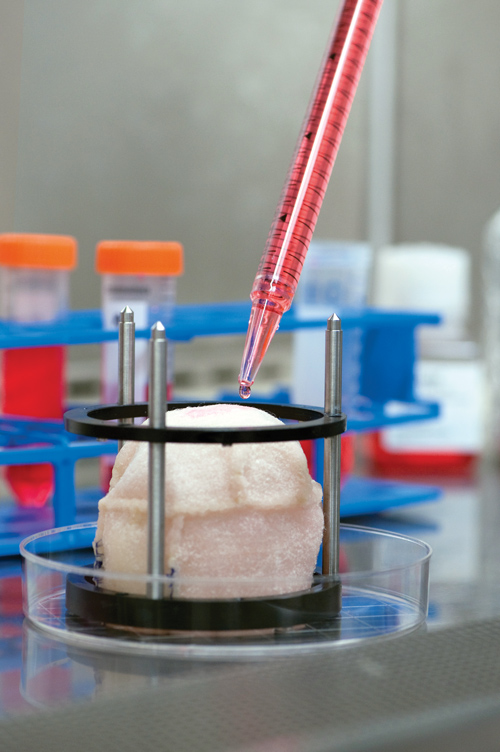 Dr. Anthony Atala is at the forefront of regenerative medicine. Along with his team at the Wake Forest Institute in North Carolina, he’s using 3D printing techniques to produce human organs in the lab, a technique that promises to revolutionise our ability to heal ourselves.

In 2011, Dr. Anthony Atala took to the stage at TED. The audience was gathered to hear his talk on the extraordinary possibility of growing ordinary organs. To drive the scientific information home, the doctor brought in a small visual aid. The object of intrigue, which fit delicately inside his palm, was a human kidney.

Though it had the appearance of a functioning organ, shockingly, the kidney had just been made backstage using a 3D printer.

At the heart of a global revolution in manufacturing, 3D printing is the process of creating solid objects with a specially formulated machine that uses plastics, ceramics, glass or metal to ‘print’ objects layer by layer. From Nike footwear to a house, to a dress which debuted on Dutch designer Iris Van Herpen’s Paris runway in January, 3D printing is clearly hot on everybody’s radar. Suitably sci-fi, 3D printing has even been used by NASA to design rocket parts for its Mars expedition. Now, thanks to the pioneering efforts of Dr. Anthony Atala, the fledgling technology is taking on a whole new challenge: the ‘printing’ of vital organs.

Dr. Atala has been developing 3D printing techniques as part of his groundbreaking work in regenerative medicine, the medical field dedicated to replacing – or regenerating – human cells, tissues and organs, restoring them to normal functionality.

Some animals have the ability to regenerate naturally. The salamander, for example, is able to self-sever body parts to escape predators. Rather than remain permanently crippled however, salamanders can regenerate complex tissues, including parts of the eyes and limbs, within a few weeks.

Humans can’t regenerate like their amphibian friends but for over twenty years at North Carolina’s Wake Forest Institute for Regenerative Medicine, the Peruvian-Lebanese doctor has been exploring the body’s self-healing capabilities.

“Humans are able to regenerate in some capacity,” he explains in a recent telephone interview with us. “We are constantly regenerating. For example, your skin regenerates every couple of weeks. But real problems occur when there’s disease or an injury to more complex organs.”

When tissues or organs are damaged, whether by disease (like hypertension or diabetes) or sudden traumatic injury (like a car accident), the body responds by creating scar tissue. This actually prevents the body from properly healing, causing potential organ damage and failure.

Tissue and organs can be “regenerated” using several methods, all of which have been honed under Dr. Atala’s guidance, while damaged tissues and organs can be stimulated to heal themselves, by injecting them with certain molecules and proteins that induce the damaged part to fix itself.

Beyond repair, regenerative medicine extends to the growing of organs in laboratories for implant. This is where 3D printing comes in.

The field is relatively nascent. A paediatric urologist who describes himself as a naturally curious man, Dr. Atala first grew interested in regenerative medicine in the early 1990s. He was performing procedures on infants who needed replacement organs, which then meant using tissue from other organs or synthetic materials like plastic or metal. Understanding how this had the potential to lead to future health complications, Dr. Atala began searching for better alternatives. 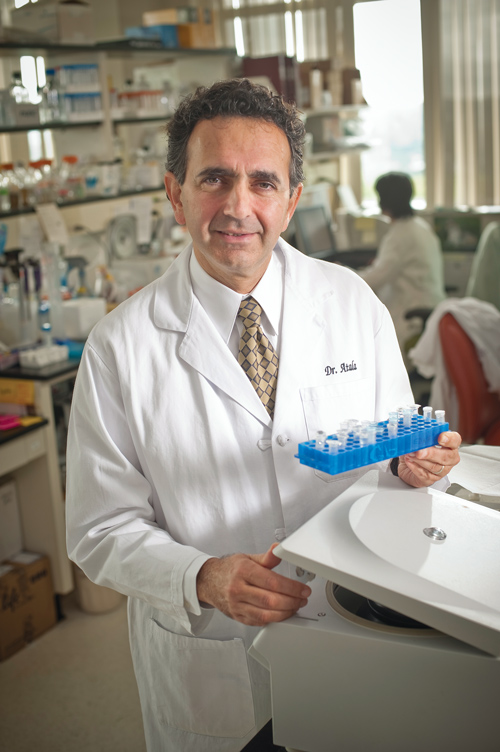 Dr. Atala was born in Peru in 1958, grew up in Florida and has a degree in Psychology. He went to medical school at the University of Louisville where he also completed his residency in urology before serving as Director of the Laboratory for Tissue Engineering and Cellular Therapeutics at Children’s Hospital Boston.

“[My team and I] started look at how to create tissue,” he continues. “Back then, it was still considered science fiction but the concept was based on solid facts.”

The doctor and his team began experimenting with different organs and techniques, to see if they could grow human tissue in a laboratory. Their eventual goal was to be able to transplant this tissue into patients who needed replacement organs.

Explaining that the science was tentative at the time, several years and many experiments after he first began, the team succeeded in growing cells and tissues outside the body.

Here’s how it works today. Typically, a patient needing new organ tissue will be admitted to the hospital 6 to 8 weeks before surgery. Dr. Atala and team then extract a small tissue sample and begin growing the cells outside the body until they have sufficient quantities to begin ‘building’. They then apply the cells to a degradable ‘scaffold’ that mimics the desired organ shape and then “bake it like a layered cake” by placing it in an oven-like device that simulates the human body. Once it has ‘cooked’ for a few weeks, the organ is ready to be inserted.

Because the cells are the patient’s, this process eliminates the possibility of tissue rejection – the body recognises the lab-grown tissue as its own. Given the number of transplant recipients that reject donated organs and suffer organ failure, this represents a major step forwards for current procedures.

According to the latest WHO data from 2005, 66,000 kidney transplants, 21,000 liver and 6,000 heart transplants were performed globally in that year, which represents a mere fraction of the actual number of patients awaiting transplants.

In America, the national waiting list for organ donations has 117,294 candidates but only 28,051 transplants were performed in 2012. The result is that almost 18 patients die each day because of a lack of available organs. This problem is worse in the Middle East, where organ donors are scarce, possibly due to prevailing religious interpretations, which prohibit transplantation. Meanwhile, the limited number of organs worldwide has created a black market. Regenerative medicine has the potential to end this scarcity – and the ensuing complications – forever.

Flat organs (like skin) or tubular organs (like blood vessels) are the easiest to recreate – Dr. Atala’s team has had the most success in creating lab-grown urethras. But it is solid organs, like the heart or kidney that are in greatest demand and which, incidentally, are the hardest to make. Due to the complex network of blood vessels needed to sustain them, lab-grown hearts and kidneys remain out of reach for the moment.

But only just. While the doctor wasn’t prepared to give a specific time frame – caution in this case being sensible – he said that he’s hopeful the science will get there soon.

Given their success to date, the doctor’s optimism seems reasonable. After all, his is the team that thought up 3D printing for organs, long before it came in vogue. “We’ve been working on this for over 10 years,” Atala says. “We’ve designed all of our own printers by adapting and tinkering around with existing 2D printers.”

The new world of custom organs beckons. This February, a man in the U.S. had 75 per cent of his skull replaced with a custom-made implant, produced by a 3D printer. Match the endless possibilities technology is affording the medical field with the creativity and determination of Dr. Atala and his team, and it may only be a matter of time until custom-made kidneys come to a transplant near you.