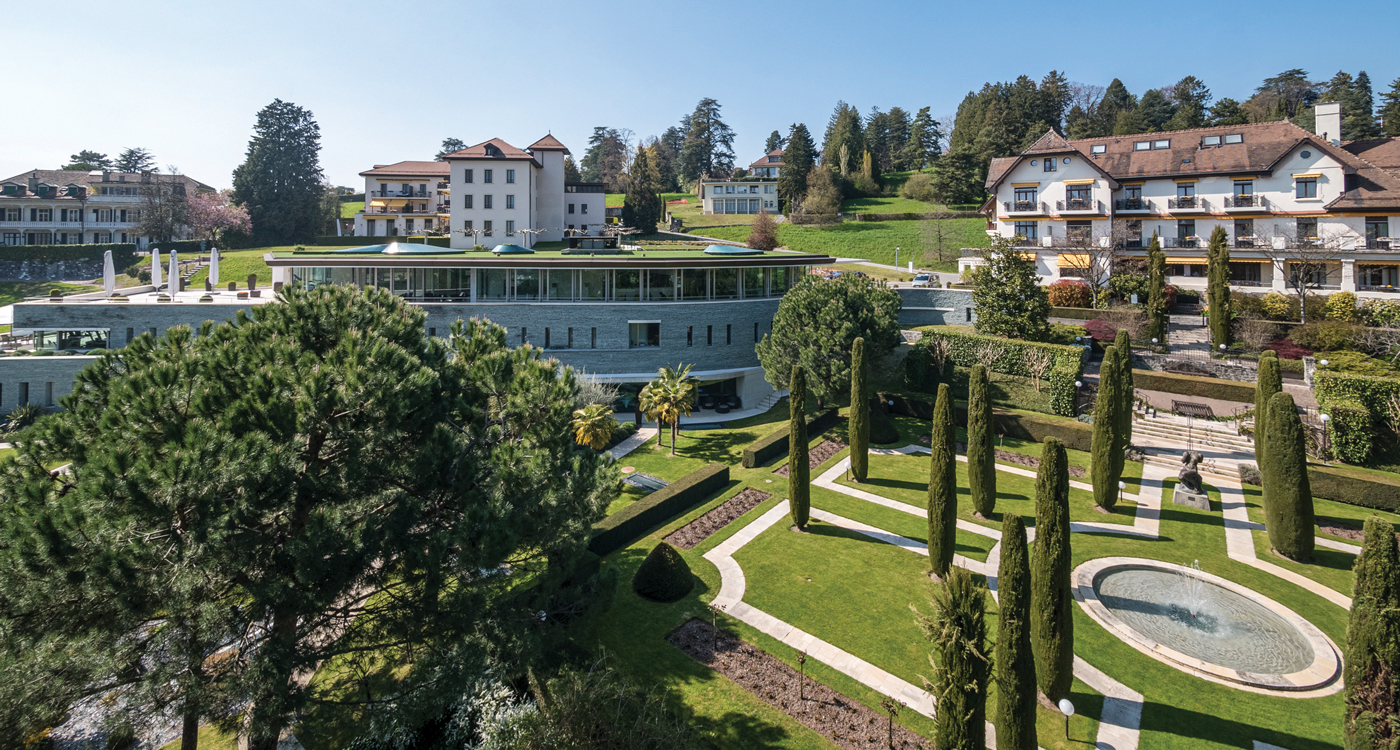 An Escape to Switzerland's Extraordinary Clinique La Prairie is An Indulgence You Owe Yourself
January 30, 2020 Nicolas Shammas

Why do so many of the world’s ultra high net worth individuals continue to visit Clinique La Prairie? Because it’s quite simply one of most sophisticated and advanced medical centres in the world.

We have become addicted to the concept of buying stuff. Indeed, consumerism isn’t just universal and classless now, it is also a core tenet of 21st century life. In many ways, with the advancement of social media we’ve been led to believe that happiness is a matter of buying the perfect house, driving the best car, wearing the trendiest clothes and posting status updates on the latest high tech devices. The sad reality though, is that FOMO and unrealistic expectations are having a detrimental impact on our health and wellbeing, and it’s perhaps a consequence of all the effort we put into impressing others (rather than tending to our own inner needs) that we now require something far more profound than a mere holiday to get us back on the straight and narrow.

The luxury medical suites, which are set in the top floors of the medical centre, have just been totally renovated with a very modern new aesthetic. The rest of the guest accommodations will follow suit over the coming year or so.

Luckily salvation does exist in the form of a relatively new phenomenon – the medispa. This is a state-of-the-art wellbeing-focussed health farm with a roster of highly qualified medical, nutritional and sports experts who aid you to achieve your goals of improving fitness, looking younger, losing weight or even tending to a more serious health issue that you have probably been putting off for way too long. There are a number of such options, including the Lanserhof in Tegernsee (Germany), Villa Stéphanie in Baden-Baden (Germany), SHA Wellness Clinic in Alicante (Spain), or even Canyon Ranch in Arizona, Massachusetts, as well as California (USA). But it’s the oldest – Clinique La Prairie in Clarens (Switzerland), which has been receiving countless luminaries since 1931 – that remains the best. Why?
Because it has become as much an exclusive high-end hospital as it is a spa.

Okay so it is expensive (it can cost as much as 150,000 USD for a couple in a suite) but what you get for your money is a rigorous medical examination of almost everything from your blood to your bones as well as pampering, gourmet meals, exercise classes and some of the clearest, cleanest air in the world. Not only will you leave feeling physically better, you’ll appreciate the psychological benefits too. And, unlike that holiday in which you got almost no R&R (and instead got your nerves frazzled by the kids), you’ll return from Clinique La Prairie looking, and feeling better, brighter and bouncier too. In short, there’s undeniable value in their proposition.

The clinic was founded almost 90 years ago by a Swiss surgeon, Dr. Paul Niehans, a pioneer in animal-based cellular therapy whose research led to the treatment of various conditions. Yet, despite his groundbreaking work, especially in regards to arresting the ageing process, the clinic only really became famous in a global sense when, in 1953, he managed to revive Pope Pius XII by injecting him with a secret substance he had developed based on cells taken from the foetus of unborn lambs.

RIGHT: The indoor pool doesn’t just have a sky light, it’s enclosed by floor-to-ceiling windows so you can enjoy views of the surrounding trees, lake and even sunsets behind the nearby mountains. LEFT: Most days are taken up with light exercise and heavy massages.

In the late 1970s, just a few years after Niehans died, a Swiss banker called Armin Mattli acquired the facility and almost immediately set the laboratory to work, applying their know-how in cellular revitalization to a pioneering line of skincare products – La Prairie Cosmetics. Yup, the same one you know. But, Mattli never intended to hold on to the brand and he subsequently sold it a mere four years later – for a reportedly huge sum of money – using the funds to finance new buildings and medical programmes at the clinic. In many ways it’s disappointing that the world famous skincare brand and the clinic are no longer associated with one another but then again, as Eloïse Martiner Bot, the clinic’s current public relations manager puts it: “The clinic would not be what it is today had he not sold off the cosmetics business”. Whatever the case, Clinique La Prairie remains privately owned by the Mattli family, with Gregor Mattli, Armin’s son, now serving as chairman.

Amazingly, despite approaching 90 years of age, the clinic has managed to remain on the cutting edge. Now incorporating three main buildings – the original Residence (where Dr. Niehans’ clinic was born), a modern glass and steel medical facility (where they now have 55 doctors on call), and finally a 19th century chateau onto which they have added a beautiful extension that blends into the clinic’s park while housing the main reception, dining room, kitchen, spa (which has 18 treatment rooms), light filled indoor swimming pool, as well as an excellent health club. Similarly, the packages they offer have also stayed up with the times with programmes like Better Sleep, Better Mobility and Rebalance (from burnout or anxiety) adding diversity to some more usual offerings like Weight Loss and general check ups. The Revitalisation Programme though (which costs between 25,000 and 40,000 USD a week) is still the clinic’s biggest draw, especially among Asians, who now constitute as much as a third of their customer base. Its appeal is based on the fact it boosts your cell immune system to enhance and lengthen your life. “Anti-ageing on a cellular level doesn’t yet exist,” Dr. Violette Parzin, the clinic’s head of aesthetic medicine tells me one afternoon. “So the Revitalisation Programme is more about slowing the ageing process. For those looking to turn back the clock, we do have a number of other solutions.”

Following close behind Revitalisation however is the Master Detox and that’s the programme we got to experience first-hand – although not in its entirety. You see, the programme (which costs 15,000 USD a week) normally requires a 6-night stay but we could only squeeze in four. That’s still plenty of time to get a lot done, though.

LEFT: The restaurant is part of an ultra-modern extension completed in 2005. RIGHT: Going animal-free doesn’t mean having to endure boring food, although this was one of the better dishes involving gluten-free pasta filled with hummus on a bed of delicious tomato sauce.

The fascinating thing about Clinique La Prairie is how personalised their programmes are. In other words, your entire regime is designed specifically for you, under the careful supervision of the medical team with a holistic and scientific approach based on genetic tests in addition to a handful of examinations including a heavy metal and mineral screening, blood tests and a body composition test – they even throw in some more vanity-related assessments just for the fun of it, like Visio, a machine that examines way under the surface of your face and lets you know how well you’ve been looking after your skin.

But onto the food. Full disclosure: I am a big meat eater, I love dairy and I have never gone a day without an animal product in my life. Yet, amazingly, I managed to stick to a vegan, gluten-free, caffeine-free, juice-free, and almost sugarless diet throughout my stay and that was really thanks to Chef Sara Busseti and her 30-strong team. Dr. Magali Flot, who heads up the Detox Programme explained that the USP of Clinique La Prairie is that everything is based on medical evidence, and for that reason they do not prescribe colonics or fasting and instead believe that a more natural, probiotic and balanced approach provides longer term benefits.

The days are also busier than you’d think. Every evening a schedule is delivered to your room for the following day but there’s a dedicated concierge ready to make any changes should you feel so inclined. In general, there’s a little bit of sport (like yogalates, aerial pilates as well as walking and cycling by the lake, in either the direction of Montreux or Vevey) and a lot of massages (including the ones you know, like Thai and Swedish, but also medical ones you don’t, like a visceral massage, which rebalances the nervous and respiratory systems, and a lymphatic massage, which stimulates your self-healing potential).

Honestly, it’s incredible to think there are only 35 rooms and suites here, especially when you take into account the 55 doctors and 120 staff they have on their permanent payroll, but as Simone Gibertoni, the CEO of Clinic La Prairie explained to me before I left, it’s possible thanks to their unusual approach. “Running such a hospital and being able to buy such expensive equipment necessitated we open up the hospital of the clinic to the local community, and it’s thanks to the 60,000 or so local visits we get every year that we are able to cover those huge costs.”

However they manage to do it, they need to keep it up because an annual visit to this clinic is a sure-fire way of getting back on track, and keeping it that way for the long haul.