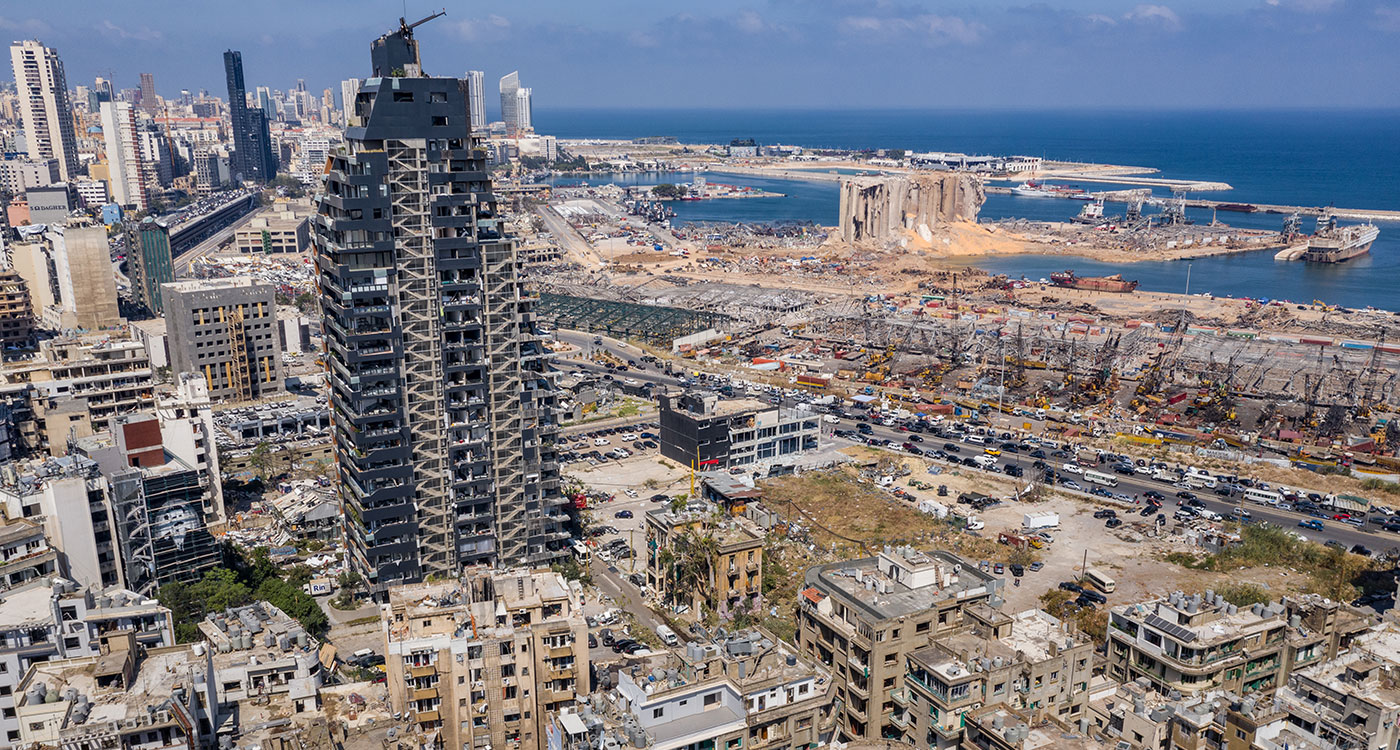 Bernard Khoury and the Aftermath of the Horrific Explosion that Ripped Through Beirut Last Summer
December 14, 2020 admin

No single architect has done more to change the landscape of Beirut’s port district than Bernard Khoury. Having first broken ground in the early 1990s with his landmark BO18 club, he has since added three major residential towers as well as his own studio to the area, but on August 4th, 2020, tragedy struck. 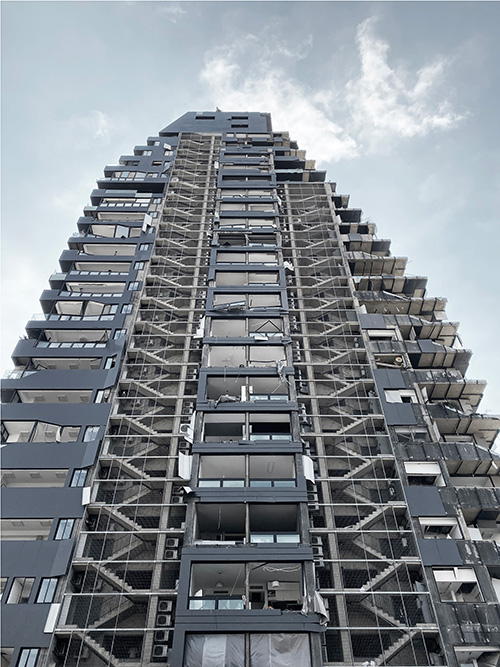 ABOVE: Built by Al Mawarid Real Estate, Plot #1072, better known as Skyline, is located right next to LIV in Beirut’s Mar Mikhael neighbourhood and, in terms of damage, there is perhaps no building in all of Lebanon that suffered more than Skyline on August 4th.

ARCHITECTURE HAS THE POWER TO CHANGE THE WAY WE LIVE. WHEN YOU CAME BACK TO LEBANON TO PRACTICE ARCHITECTURE, ARMED WITH DEGREES FROM BOTH RISD AND HARVARD, WHAT WAS YOUR DREAM, YOUR VISION EVEN, FOR BEIRUT?
[Bernard Khoury] I came out of the academic cocoon in 1993. Harvard and all those big schools are densely populated by pretentious idiots and I had the chance to meet so many of them. I always say: beware of the academics because they’re armed with an incommensurable pretension and can be dangerously naïve. Once out of school, I attempted to start my own practice. That came with a lot of difficulties, innumerable punches in the face and a great number of aborted projects. At the time, I saw myself as an idealistic committed soldier, engaging in noble and worthy battles, convinced that I would have the chance to be part of a great reconstruction project. By reconstruction, I don’t just mean buildings, more important to us was the rebuilding of a nation and its institutions. I thought that architecture, in the so-called post-war context, would be considered a political act. I thought that my practice would help heal the wounds that were left by more than 15 years of conflict. Things turned out to be quite different. The state was absent, its bankrupt institutions turned out to be incompetent and corrupt. It took years for the young and inexperienced soldier that I was to understand that I had to take on those battles on my own. In order to survive in such rough and toxic territories, you have to let go of the theoretical and abstract strategies that academia feeds you. You have to develop more specific tactics that transcend the conventional limits of architecture.
The devastation to buildings caused by the explosion is just so enormous. Where to begin with reconstruction?
Yes, the devastation is enormous but I would not qualify our coming tasks as reconstruction missions. Rather, I would talk about stitching, operating, healing and hopefully a convalescence period. At the end of the day, reconstruction means that at some point there was something and that something vanishes for you to come and rebuild something else. Some people think that the perfect reconstruction is the one that replicates what was once there. I don’t. I think of the city and the built environment as a lively organism. It can get severely hit but, in most cases, given the right treatment, it can recover. If the organism doesn’t lose its mind along the way, it should not suffer from complete amnesia. And just like sane organisms, buildings and cities should have a pertinent memory and with that comes the proud acknowledgement of their past experiences. In 1991, I worked on a project that I titled ‘Evolving Scars’. This was almost 30 years ago. Back then, I was already interested in this notion of scarring, the architectural dimension of war damage and demolition. These issues will certainly come back to haunt me as I address the rehabilitation of my three projects, which were severely hit by the August 4th blast.

HOW EXACTLY HAVE THOSE PROJECTS, AND PERHAPS OTHERS, BEEN AFFECTED BY THE EXPLOSION?
Three of my recently completed towers were on the front line. Two of them were the closest residential towers to the blast. The damage is enormous. We are still in the process of evaluating the losses. This involves a very thorough survey of all the surfaces and components of the buildings. Just like prior to any surgical or medical intervention, you have to fully scan and understand the trauma of a patient.
Has the international architectural community reached out to you?
I have a great number of friends and colleagues who established contact right after the explosion but those people were reaching out on a personal level. I don’t think that the “international architectural community” is very much concerned about this specific tragic event. The few signs I see are very much superficial as the architectural world is, in general, very disconnected from politics and these kinds of realities that, in my opinion, are too complex for architects to grasp or discuss in any meaningful way. 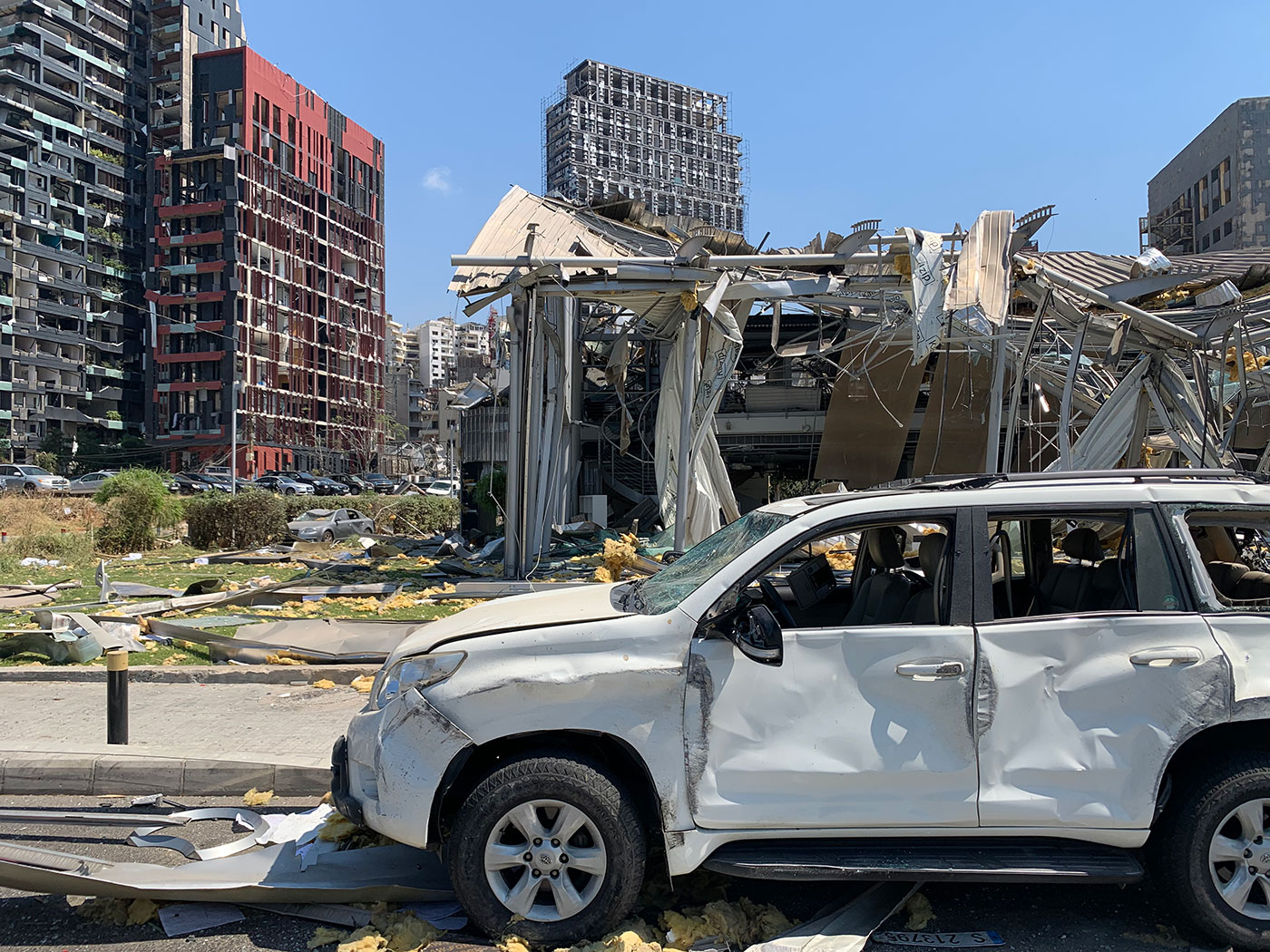 A car stranded in front of what used to be the Audi showroom. In the back left of the image, you can make out the damaged remains of both the black-clad Skyline and red-clad LIV Apartments & Lofts. The latter, was a project being developed by Premium Projects, and it suffered a terribly heart-breaking story, as not only was it destroyed on August 4th, having only just been finished but, the developer of the project, Houssam Batal, also lost his life that day.

CAN BEIRUT EVER BE THE SAME AGAIN?
I hope not.

GIVEN THAT THE CIVIL WAR IN LEBANON INFLUENCED YOUR APPROACH TO DESIGN DRAMATICALLY, WILL THE AUGUST 4TH DISASTER CHANGE YOUR OVERALL DESIGN VISION?
The August 4th disaster falls in the tragic continuity of the contradictory histories I have brought forward through my architectural interventions here in Beirut for almost 30 years now. In fact, the three buildings I built on the front line, which were severely damaged by the blast did address the port in their initial architectural expression. All three buildings had a clearly defensive posture that addressed the complex fabric on which they stand as well as the painful realities of the recent past.

WHAT ARE YOUR HOPES FOR THE ARCHITECTURAL LANDSCAPE OF BEIRUT?
I hope Beirut will never get tamed and that it remains this schizophrenic, complex, lively, engaging, sometimes decadent city.

WHAT ARE THE NEXT PROJECTS YOU’RE SLATED TO WORK ON?
Besides the rehabilitation missions we don’t have anything planned on the local front. Otherwise, we have been busy on the international front. There, we are waiting for the COVID-19 crisis to get over in order to get back to work. This past year has been really tough on us.

AND, WHAT DO YOU HOPE TO ACCOMPLISH IN THE NEXT DECADE?
I was never too good at predicting the future with certitude. As far as I am concerned, the future should be bursting with questions. Questions keep you alive and alert.