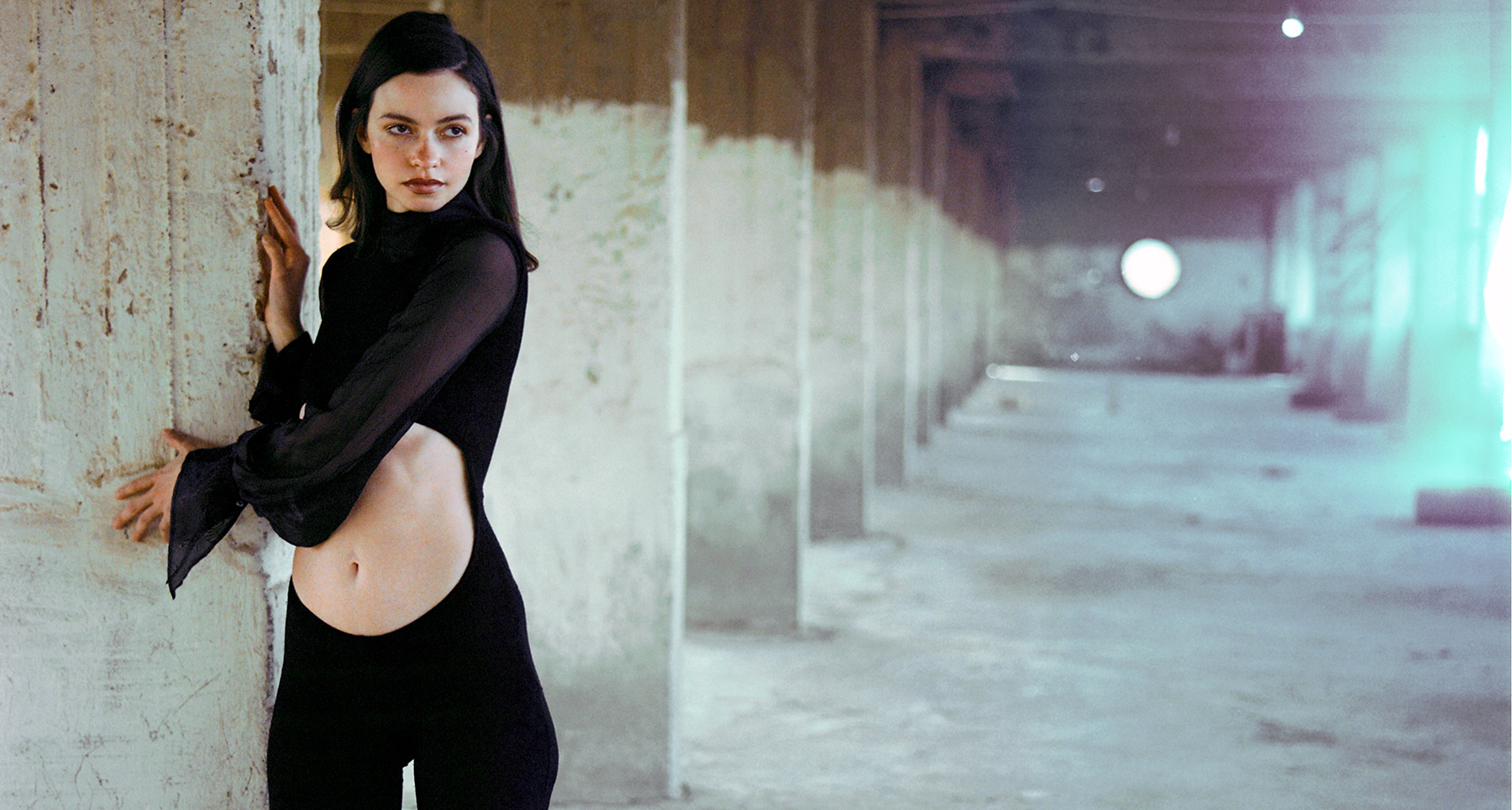 From the moment I start talking to Heba El-Dessouky, it’s evident that she’s one of a kind. We’re on a Zoom call and the 27-year-old model-turned-actress is at home in Cairo’s leafy Maadi suburbs. She sits wrapped up in snug black faux fur against the cool, cloudy morning, her hair scraped back from her beautiful, fresh face. 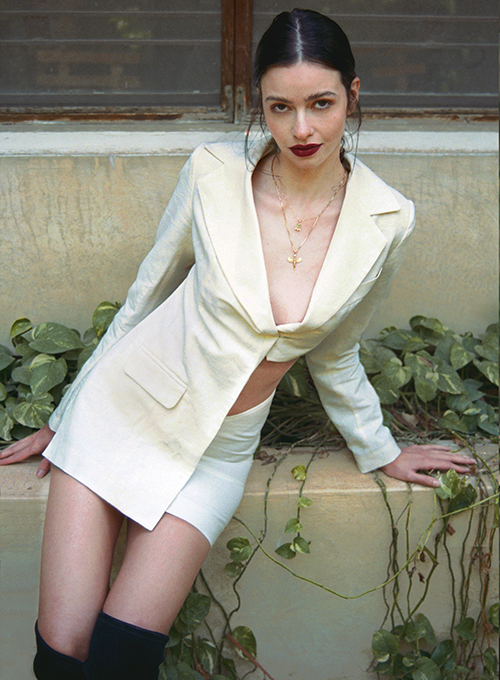 El-Dessouky is clearly happy in her own skin, preferring to cook dinner, watch TV, or read a Russian classic novel, over heading out to Cairo’s bustling downtown. Today, she tells me she has been awake since 5am, worked out and practised her daily 20-minute meditation. “These days are very challenging with the increase in mental health problems and everyone trying to stay sane, it’s very important to stay grounded and connect with your inner self,” she says in a gentle voice.

She’s hit the ground running since her role in the mystery-suspense drama ‘Paranormal’ in 2020, Netflix’s first ever Egyptian production. She originally auditioned for the role of Maggie – played by Razane Jammal – but the show creator, Amr Salama, felt she was up to the job of playing two roles, that of Naiad and her twin sister. “I was very lucky to be part of the cast for this TV series, because the idea and the concept was so different from anything that’s been done before,” she explains. “The process of preparing for the character was very exciting because it was complex with both roles being so different. I must say that Netflix chose people that really fit the characters, and I feel that this was one of the most important factors that made this show a hit.”

El-Dessouky is understandably excited about the show’s popularity. “It was a transition for people to see different ideas, to have open minds, because the issues discussed in TV shows or movies are usually limited. But Amr Salama opened the way for different topics, for more creativity, and the audience loved it. We have a great audience that really appreciates work, so it is very important that we deliver something that is of value to them.”

For El-Dessouky, acting is about the process and the journey rather than fame or fortune. “If you’re not genuine, people can feel it,” she explains. “Being authentic is really important because it affects you as a person – your acting, interviews, even your posts on Instagram. It’s important that you create your own path, your own unique journey. Everyone has their own background, culture and upbringing, so use that to empower yourself and create something that’s unique,” she advises.

This authenticity came into play in her other role as Rania in the TV show ‘Except Me’ (Iilaa Ana), which explores contemporary women’s issues, heralded by director Mariam Ahmady. “I loved working with Mariam,” she says, “She is very humble, compassionate and understanding and she can help bring out the best performance in an actor.” 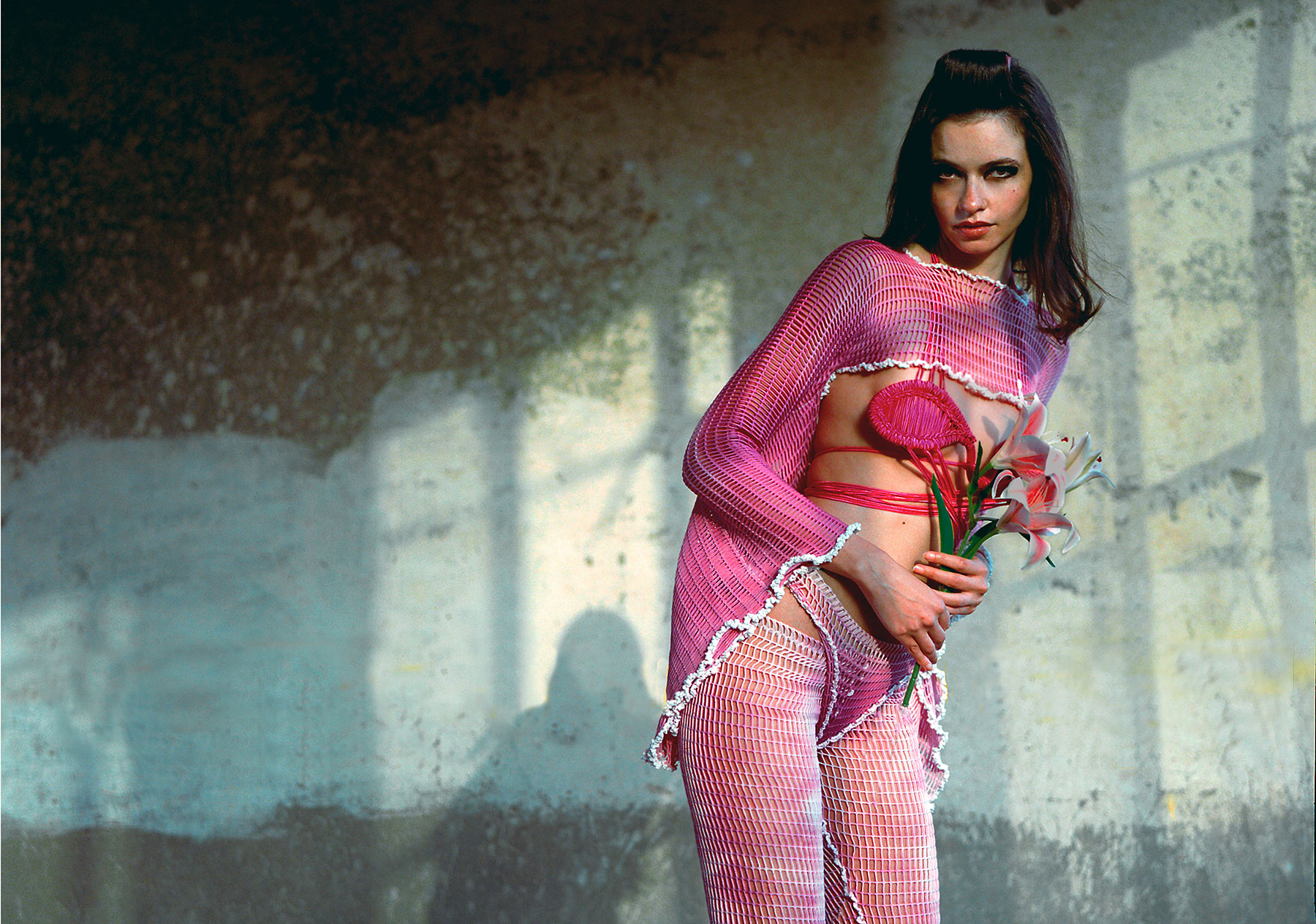 ABOVE: El-Dessouky finds modelling to be an interesting way to express herself but has never wanted to be a model per se. She reveals her first shoot wasn’t until after she gained a degree in business administration, and even now she maintains it won’t ever be a full-time thing. “Being a doll or a pretty face isn’t good enough for anyone. I think you have to work on different sides of yourself and explore your potential.”

The good news is we’re going to see much more of El-Dessouky on screen in 2022. She takes the co-lead in the new short film, ‘Have a Nice Day’, created by American-Egyptian, Tribeca-winning filmmaker, Sharine Atif, which is due to be aired on Egyptian TV sometime in May.

“It’s about an Egyptian girl who lives in New York and she’s has an argument with her Palestinian boyfriend over some hummus. The whole short is quite intense but funny at the same time, looking at a serious topic in a light way,” she enthuses. “We did two months of preparation with Sharine for the character and she was very specific about certain things that she wanted in the movie. I enjoyed the rehearsals for it, as well as the shooting, and it’s a very cool story,” she adds.

Her very latest project, which she describes as a “murder-mystery-kinda show,” is still very hush-hush at the time of writing. She teases us with a mention of her co-star, the top Egyptian actress, Enjy Kiwan. “I can’t really tell you the details now, but all I can say is that it’s about five girlfriends from a modelling background.” El-Dessouky will also play Brigitte Bardot in a new TV series, ‘Ahlam Saeeda’, directed by Amr Arafa, which will also star the celebrated actor Youssra this year. 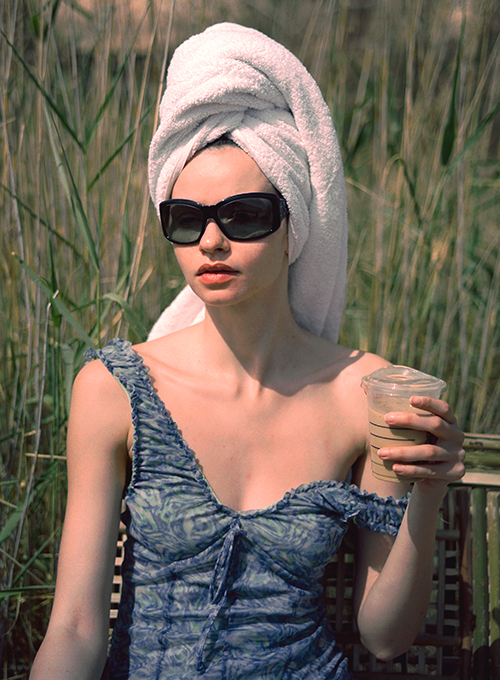 ABOVE: Watch out for El-Dessouky in the upcoming TV show ‘Tahqeeq’ (Investigation), directed by Shank with Ahmed Malek and Karim Fahmy, ‘Have a Nice Day’, which is a short directed by Sharine Atif, and a much-hyped upcoming show about four girlfriends, who are all ex-models, but each is leading a very different life path.

As the call to prayer rises on the tannoy in the background, she tells me how she made her serious break into acting. “I started by taking workshops and, when lots of my friends from the modelling and fashion industry shifted to acting, I used their advice, knowledge and experience. It’s very competitive here. Egypt is the mother of cinema. So, I had to work on myself and my craft. You never reach a point where this is enough.”

El-Dessouky also forges her own way as an Instagram influencer, a position she doesn’t take lightly. “You can get easily distracted in the industry by social media and all of its noise, so it’s very important that you have a strong core belief system, as well as, more importantly, a goal, and keep focused on that. I like to stay natural and be myself, even if it’s not the most popular thing on Instagram.”

Ultimately, she says she wants to empower her young female followers. “Things have become very challenging with social media bullying and double standards. It can be very conflictual to see things through a lens of Middle Eastern culture and observe everything that is happening alongside traditional Arabic culture. I generally try to balance things out and not offend anyone, but at the same time call for a change and for people to be more open and accepting.”

She explains that she is very grateful for her own Qatari-Egyptian upbringing, having moved from Doha to Cairo at the age of eleven. “This helped me have an open mind and enabled me to read different cultures and accept different backgrounds,” she adds.

El-Dessouky says she doesn’t believe you can be a role model in every aspect of life, but when I challenge her to pick her own ‘influencer’, she chooses the Egyptian national and Liverpool footballing icon Mo Salah, “He’s very dedicated and is not distracted by any of the noise that’s happening around him. I love his commitment and devotion to his talent and craft,” she says.

El-Dessouky has used her fashion industry experience to launch her ‘As Good As New’ fashion resale app and website (www.asgoodasnew.app), recycling luxury and pre-loved fashion brands. “It’s a business that’s focused more on sustainability. We take clothes from people, designers or businesses that want to give their inventory another chance.” And it’s something she is clearly passionate about. “I’ve seen all the waste that’s created in the fashion industry and I feel Egyptians are heavy consumers and my idea was to change that. You don’t have to wear something once and then throw it away. You can reuse it, sell it, or repair it. Everyone can enjoy having high-end designer clothes.”