People | Design | This Weekend Home in Amchit, Lebanon is the Perfect Holiday Getaway 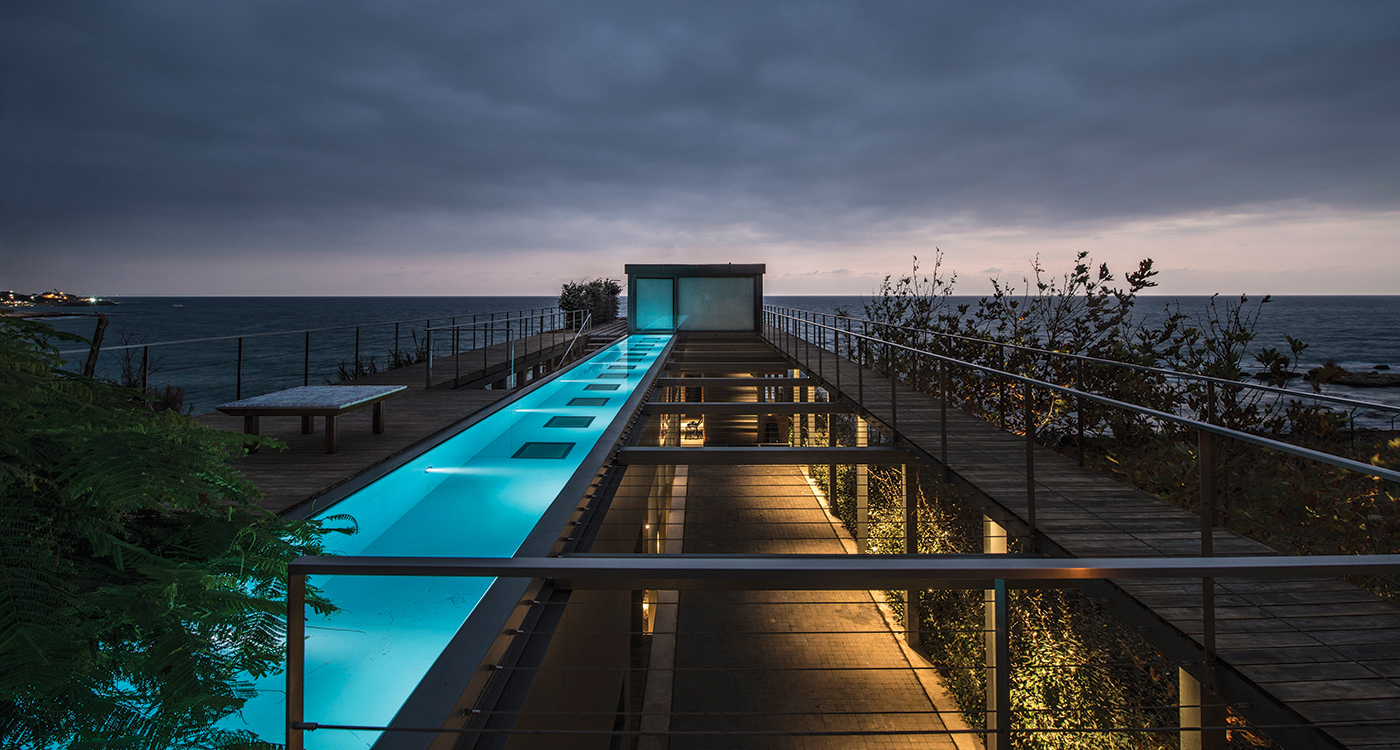 My interview with Blankpage gets off to an unsettling start. Sat in their black-walled meeting room, sparsely furnished with Barcelona chairs and large, aesthetic lumps of wood and stone that function as sculpture and furniture, I find myself ranged against the practice’s four principal members at the same time. Facing me, from left to right are Jemma Chidiac, Karim Nader, Patrick Mezher and Walid Ghantous.

Though they are cheerful and polite, I cannot help feeling at times as though I am sitting in front of a board of examiners. Shades of university thesis-defending days.

If this isn’t proving to be my standard interview, that’s to be expected. Blankpage are not your standard architects. Not because, while they have worked together since 2000, they didn’t formally establish an office until 2008. Not because in their lexicon, ordinary words like ‘renovation’ take on completely new meanings, in this case – and when applied to a house that originally occupied one of their sites – it appears to mean knocking it down and replacing it with something new. Nor is it because they play with art and furniture design as part of their practice – the architect/designer has a long and storied tradition – or even because perusing their website reveals a plethora of different approaches and styles. 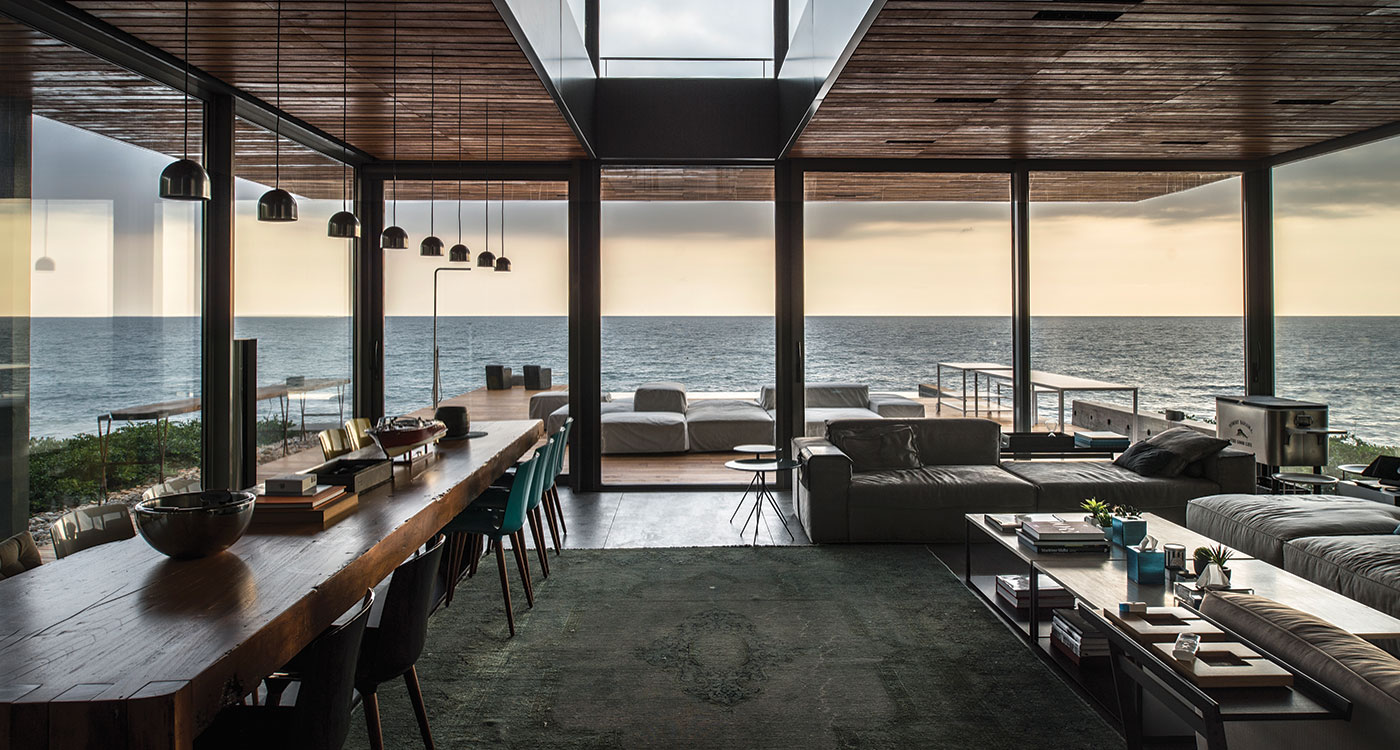 I’m not saying that they have no identity. Blankpage are contemporary and while they may make allusions to tradition – a moucharabiya here, an internal courtyard there – you’ll find that any stucco tiles or screens used bear little resemblance to anything you may have in mind.

“We deal with every project without preconception, without bias or prejudice, in order to come up with solutions that are bespoke,” Patrick Mezher tells me with a knowing smile, “and also relevant to whatever is under study.”

“We don’t want to be recognised for a particular style,” Karim Nader adds. “We don’t want people to think of Blankpage as ‘minimalism’, or as ‘whiteness’. The idea of the blank page is more of an attitude and an approach, which can be reflected in complex forms and a complex mix of materials as much as it can in simple forms and minimal palettes of material. It all depends on what’s at stake.”

As approaches go, this one is both ballsy and interesting, especially for a practice that’s still in the process of establishing itself and especially in these you-are-your-brand days, when we are all – architect, writer, musician, banker, blogger, dog-walker – encouraged to create an identity which will permit people to more easily understand and therefore, ‘consume,’ us.

“Plus,” Nader adds, with refreshing honesty, “it’s not interesting for us to do the same thing over and over again.” So it is this that sets them apart. Fluidity, a willingness to give things a go, to take the road less travelled, in short, to approach each of their projects as though, well, it were a blank page and to do what makes most sense.

Take the building that has brought me to them. Completed last year, the Amchit house is a beach chalet occupying a narrow strip of land on Lebanon’s northern coast. Part ship, part pier, all lighthouse (at least at night), the structure Blankpage ended up building bears no resemblance to any of its neighbours. Slender, see-through and improbably slight, it seems to barely occupy its site, lightly anchored to the earth by a series of super-slender metal pillars, whose delicacy belies their strength.

“The Amchit residence is about lightness, horizontality, flotation and nature.”

My first impression of the house though, was one of generosity – of design, of spirit, of presence, of its owners. Here is a building which, unlike its brethren, manages to make the most of its location – for its owners, without ruining the view – for others, and so the beach, the sea, the horizon are not obscured, as is too often the case.

Emblematic of the practice’s willingness to try new solutions – an approach that Mezher says is easier in a country where a rich tradition of craftsmanship and relatively relaxed building regulations encourage experimentation – is the rooftop lap pool. Ringed by a deck, it runs the whole length of the pergola-like structure that links the house to the road.

The only two options readily available – a double-lined stainless steel shell or good old-fashioned concrete and tiles – were either too expensive (the former) or too heavy (the latter). So Blankpage decided to take this part of the project away from the contractors, and into their own hands. 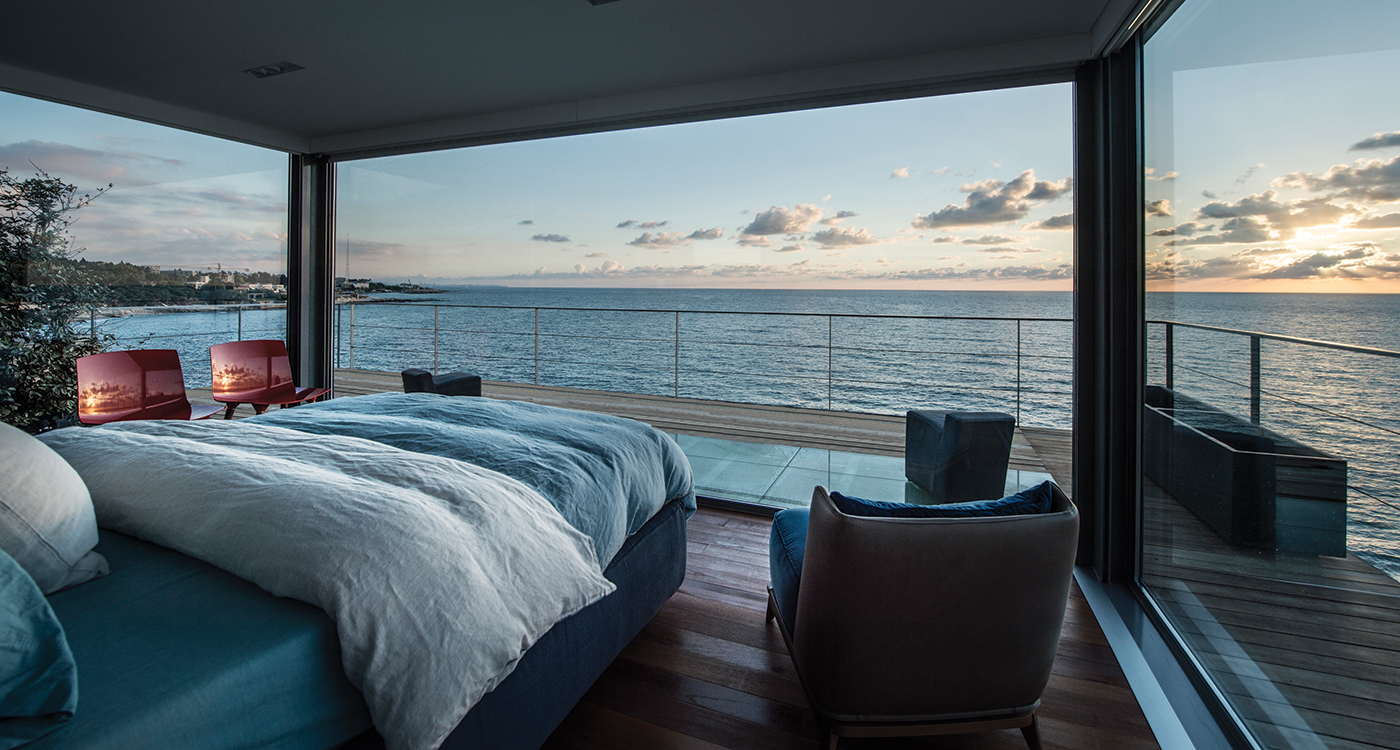 “We thought, why not try to make it out of fibreglass?” Jemma Chidiac tells me, as I ogle at an image of the result, a long, brightly lit turquoise-blue pool picture stretching into the wine-dark sea under a canopy of gunmetal grey clouds at dusk. “We went to search for a boat-builder, they’re used to working with these kinds of things. We told him what we wanted and he said, ‘sure, I’ll build a mould for the pool’. This tells you that you can experiment, you just have to try.”

Fortunately, the experiment was successful and at 24 metres, the result was what might just be the world’s longest single piece fibreglass tub, albeit one whose underside is studded with glass portals. Driven to the site along the winding coastal road on the back of an articulated lorry and then winched into place, the day the pool ‘landed’ must have made for an impressive sight.

Conceived as a weekend getaway, a place to enjoy the Mediterranean and all it has to offer, the house itself is surprisingly unobtrusive, given that it contains three bedrooms – the glass and steel box that is the master bedroom occupies the upper level and opens directly onto the pool on one side and looks over the sea on the other – a spacious living/dining area, kitchen, gym and lounge. There’s a ground level deck fringed with an infinity pool, designed less as an extension of the sea than as a mirror to reflect the dramatic Amchit skies and a drive-in open-sided garage, which is sandwiched between the two layers of decking, underneath and to one side of the lap pool. 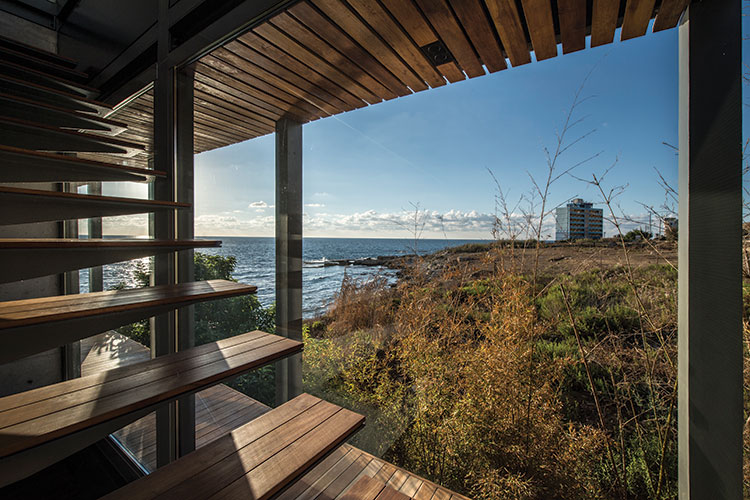 The main entrance is at road level but floating staircases leading up and down permit entry to the house to be – as Chidiac puts it, “a play on different levels of access”. The owners can directly access the rooftop and guests do not need to traipse through private family areas to get to the lounge and seafront deck.

Already inconspicuous, the sheets of glass serving both as refractors and mirrors, most of the house, with the exception of the three-level glass box at the end of the ‘pier’ is located behind greenery, which encourages its absorption into the site. “The whole landscape interlocks with the building,” she continues, “and it’s placed in a way that the house ‘settles’ and extends from the road to the seafront.”

The palette of materials is simple; wood, concrete, glass, steel. The finishes are meticulous though, and the necessary infrastructure is so deeply absorbed that even the grills for the air-conditioning vents are hidden within the design. The result is an uncluttered sophistication that melds the best of Japanese and Levantine design and the deliberate eschewal of the kind of ‘noble’ materials frequently employed to connote ‘luxury.’ The emphasis of the location and the views focuses the mind on the real luxury of this project – uninterrupted views of your own private slice of the Mediterranean.