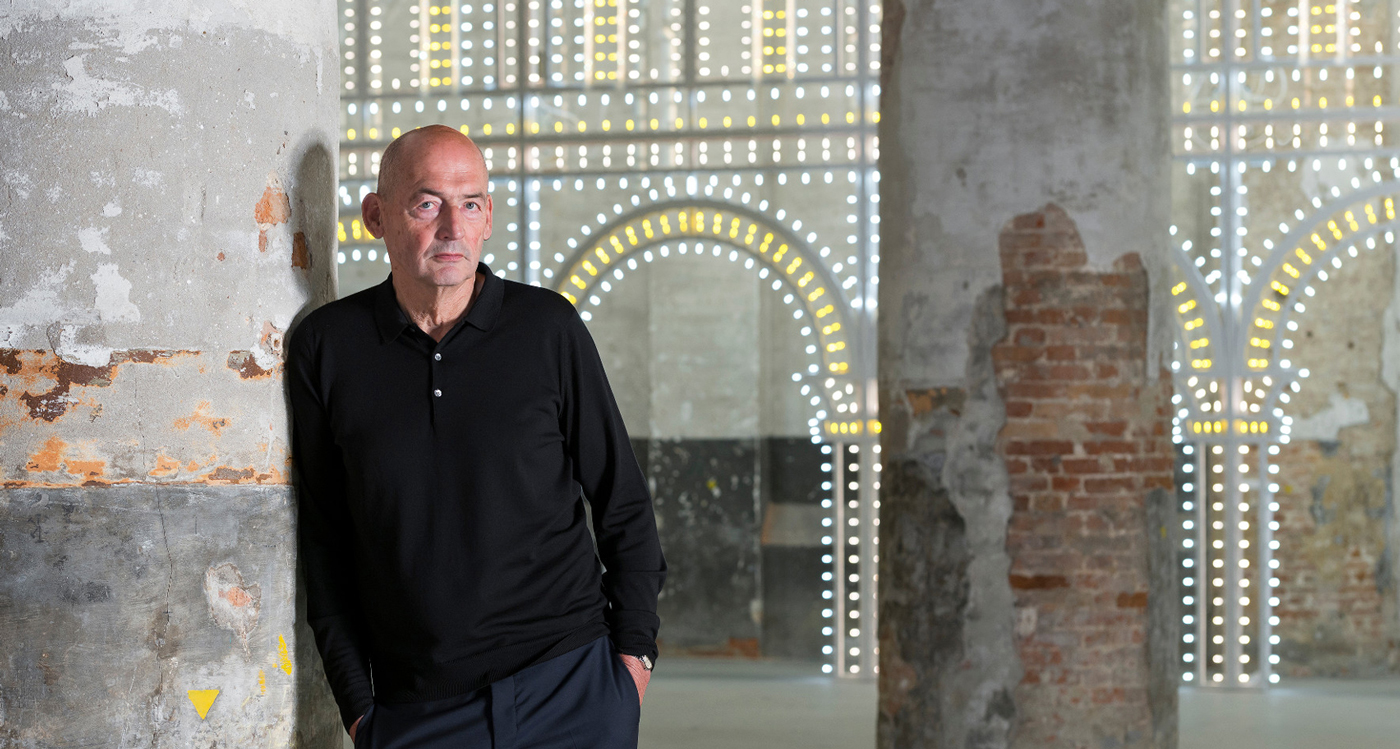 OMA is in the Midst of Bringing The Koolhaas Effect to the Middle East
December 7, 2015 Govind Dhar

OMA (Office for Metropolitan Architecture), co-founded by Dutch architectural titan and theorist, Rem Koolhaas, has produced as many world-famous architects as it has world-famous buildings. The latest to join the fray is Syrian-born, Iyad Alsaka, partner in charge of the Middle East.

Iyad Alsaka’s voice is hoarse this morning during our Skype interview. “Too many intense meetings chasing payments,” he explains. It comes as a surprise, and a gratifying one, to learn that even one of the world’s greatest architectural firms isn’t exempt from the banal torments of chasing clients for money. “It’s not the fun part of what we do.”

It’s been a busy year for OMA and Rem Koolhaas. Not only did the Dutch ‘starchitect’ direct this year’s Venice Architecture Biennale but his firm was also shortlisted for no less than four international prizes. Despite his mission against skyscrapers, OMA won the ‘Best Tall Building in Europe’ Award for ‘De Rotterdam’ – a mixed-use, a triple-stacked 44-storey mammoth conceived as a ‘vertical city’ on the river Maas in Rotterdam, Koolhaas’ hometown.

Koolhaas is no stranger to contradiction though. When OMA was awarded the prize for ‘Best Tall Building Worldwide’ for the China Central Television building in 2013, he said, “The fact that I am standing on this stage now, means that my declaration of war went completely unnoted, and that my campaign was completely unsuccessful.” Despite his modest acceptance speech, the CCTV building is as abstract as skyscrapers get.

OMA has spanned the globe with its stark constructions and is often spoken of in the same breath as the world’s other architectural powerhouses: Foster+Partners, Studio Daniel Libeskind, Zaha Hadid Architects and Renzo Piano Building Workshop. When you behold OMA’s works, they will strike you as the others’ do: eager to stand out. But there’s still something more brutal about Koolhaas’ lines and the way his buildings almost embarrass their surroundings for being too conformist.

WE THINK THERE IS HUGE POTENTIAL FOR THE REGION. WE’RE WAITING FOR THE DUST TO SETTLE IN IRAQ, SYRIA, LIBYA AND LEBANON.

Beneath the surface of Koolhaas’ whip-smart intellectual repartee, you’ll find that the Dutchman is both a rebel and a thinker, with the soft power needed to bring his visions to fruition. He has spoken of his innate distaste of traditionalism or sentimentality towards historic architecture. So what might OMA have in store for us in the Middle East?

Waterfront City in Dubai is a masterplan of enormous scale and ambition, aiming to generate a critical mass of density and diversity in a city that has seen explosive growth in recent years but little cultivation of the street-level urban activity that most metropolises thrive on.

“OMA does not have a specific style in my opinion,” says Alsaka. “We respond to the region, the city, the client. We try to rationalise it as much as we can, in a programmatic way, making it as efficient as possible for the developer. If you want iconic architecture, OMA is one of the firms you’ll approach. So we constantly get invited to compete for international designs.” 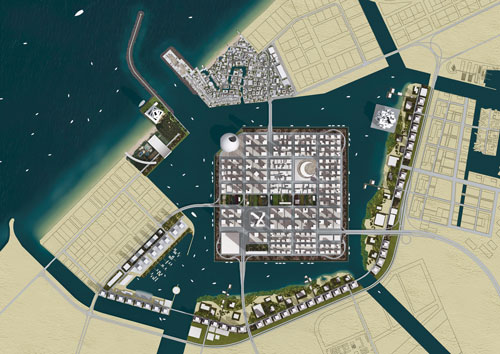 The Waterfront City development comprises an artificial island linked to four distinct neighbourhoods – Madinat Al Soor, the Boulevard, the Marina, and the Resorts, which together, are twice the size of Hong Kong Island and yield a total floor space of 1,180 hectares.

Funnily enough, Alsaka was one of those people who invited OMA to compete in an international competition – this one for the still unbuilt centre of Dubai’s Business Bay – when he was director of design with the real estate developer Dubai Properties. As a graduate from the University of Aleppo in Syria, Alsaka’s first stint in the UAE was managing operations on hospitals and shopping malls during the frenzied boom of Dubai’s mushrooming skyscrapers in 1999. In 2007, Alsaka was ready for a change, when fate intervened. “Rem Koolhaas discovered I was interested in moving and so he appointed me the head of the MENA region,” Alsaka tells me. “I moved to Rotterdam and spent every weekend either in Doha, Dubai, Saudi, Morocco or Egypt, and it became unsustainable. So I moved to Dubai. We had to bring 20 staff to the Middle East from around the world, in order to service all our clients in the region. From here, I will be managing projects across North Africa, Middle East and even India, which is opening up now under the new government.”

Although it is ironic that Koolhaas has often compounded globalisation with the homogeneity of cities, leading to more skyscrapers and a society that forever wants to shop, these towers and malls are precisely the claims-to-fame of the city in which OMA will establish its Middle Eastern headquarters this year. “Dubai has a completely different mentality,” says Alsaka. “Here, they are more hard-core commercial, with a commercial aesthetic. And a star architect means more money in fees and sometimes more building costs. However, in the last few years I’ve seen a few projects emerge in Dubai that I never thought would happen. There’s now an appetite to engage with better designers.”

As a tonic for the unavoidable malaise of the generic metropolitan city, Koolhaas is a fan of ‘cross-programming’, a situation where a space intended for one purpose might serve several others. To wit, OMA’s ongoing mega-project for Doha’s Aviation City is a myriad of form and function spread over 1,000 hectares with office, retail, education and residential spaces adjacent to Doha Bay Marina, as well as separate cargo and aviation sections. But they all share the same space and are linked by a vital green spine of garden landscape. The City will house the new Hamad

The Hamad International Airport City will be home to 200,000 people and links the new Doha airport with the city itself. OMA’s masterplan is a series of four circular districts along a spine parallel to the airport’s runway. It has a strong visual language and creates districts with their own unique identities. Phase one of the 30-year plan will be mostly complete in time for Qatar’s 2022 World Cup.

International Airport and will become a hub for the ambitious GCC-wide rail transport system (due in 2017) as well as a metro line to the city of Doha. “It’s a unique facility with a capacity of 20 million people, so it will be a rail and transport hub where you can check-in your luggage in Manama and it will be put on the plane when you arrive at HIA station to board your flight. But it’s not a vision anymore. We’ve started putting in the station boxes and utilities,” explains Alsaka. The first phase of the project is expected to be completed by 2022 in time for the FIFA World Cup that will be hosted by the city. OMA has also designed the Qatar National Library and the Qatar Foundation headquarters in Doha’s Education City, which is almost finished.

According to Alsaka, OMA has some sixteen ongoing projects in the Middle East. Unfortunately, due to the political unrest of recent years, several have been stalled in Syria, Egypt and Libya. And a mega-project in Dubai, Waterfront City, was wound down due to the global recession. But Alsaka remains buoyant. “Part of trying to establish an office in Dubai is that we think there is huge potential for the region. We’re waiting for the dust to settle in Iraq, Syria, Libya and Lebanon, we have secured a few projects in these places but they remain confidential at this time. Something we’re proud of is that we have repeat clients here. It means we’re doing something right. The fact that you’re Rem Koolhaas is not enough anymore. You have to be on your toes the whole time.”

At present, OMA’s website suggests they have some 350-odd projects in progress worldwide. Can one man, at the age of 70 still be intimately involved with the firm’s design process? “Rem is very active,” says Alsaka. “He’s always on a plane moving between the offices, meeting the teams or presenting to clients. He is involved in everything that we do. One of the best things about OMA is the collective effort. No one person sketches an idea and it gets a green light. It’s collective. In that sense, Rem’s like a movie director. He looks over the entire project but everyone contributes to it.”

When you see the designs OMA have come up with for their Middle Eastern projects, you begin to sense a signature style that’s synonymous with what we see in contemporary architecture in the Arab world. There are skyscrapers but Doha Airport City’s undulating roofs are reminiscent of the nomadic tent or flowing sails. Waterfront City bears a floating globe on the shore opposite a twisted angular tower, reaching for the sky. Perhaps Koolhaas hasn’t killed the skyscraper just yet but I’m guessing it’s the evolution of that thought you’re meant to look out for.