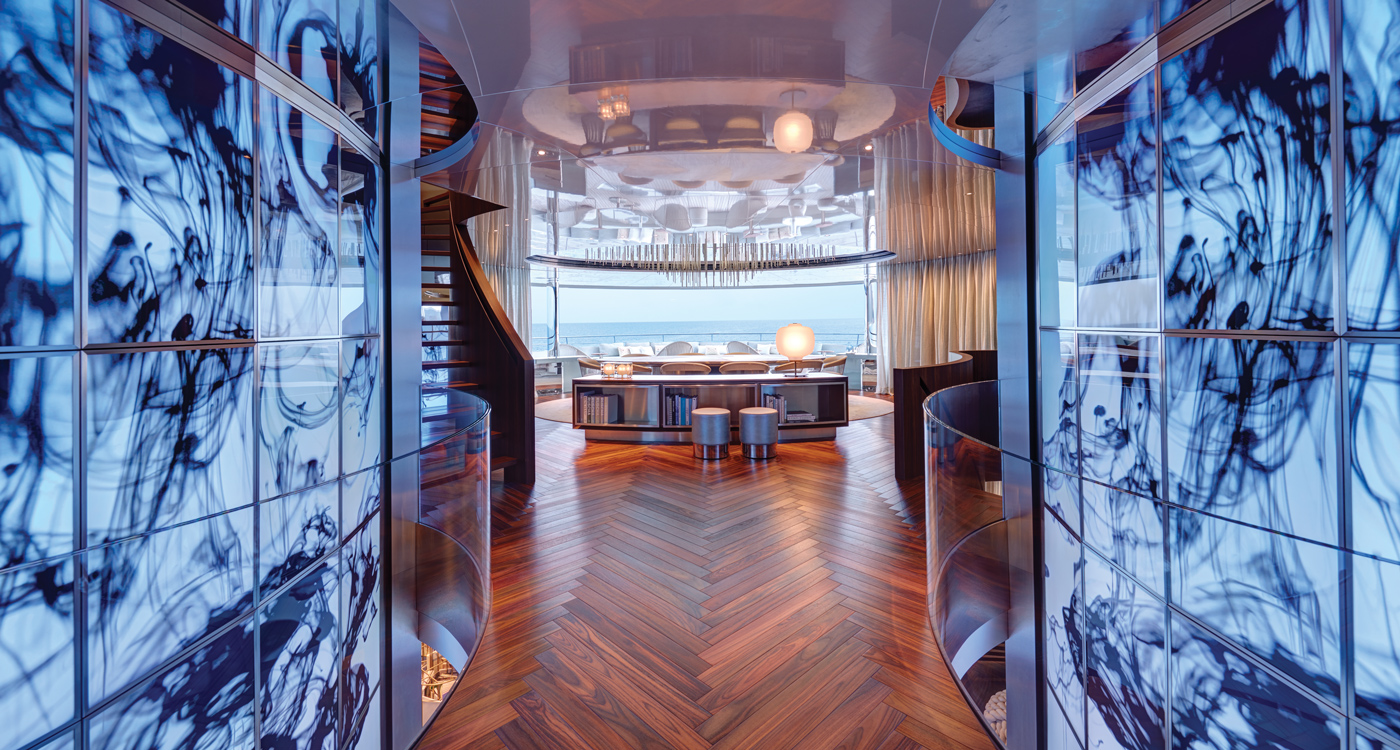 When launched in 2015, Savannah was a yacht of firsts. Now four years on, Feadship’s groundbreaking hybrid 83.5m continues to not only stand the test of time but lead from the front.

The Dutch shipyard Feadship is renowned for its full-custom deliveries, but it surpassed even its own high standards when it unveiled the world’s first hybrid superyacht. Today, hybrid propulsion is a constant topic of debate as we battle to protect the oceans from the very real threat of climate change. But in 2015, Savannah’s eco-friendly blend of single diesel engine, three gensets, batteries, propeller and azimuting thruster had never been seen before. The pioneering electro-mechanical propulsion platform placed Feadship firmly ahead of the pack, and shipyards the world over rallied as best they could in a bid to catch up. 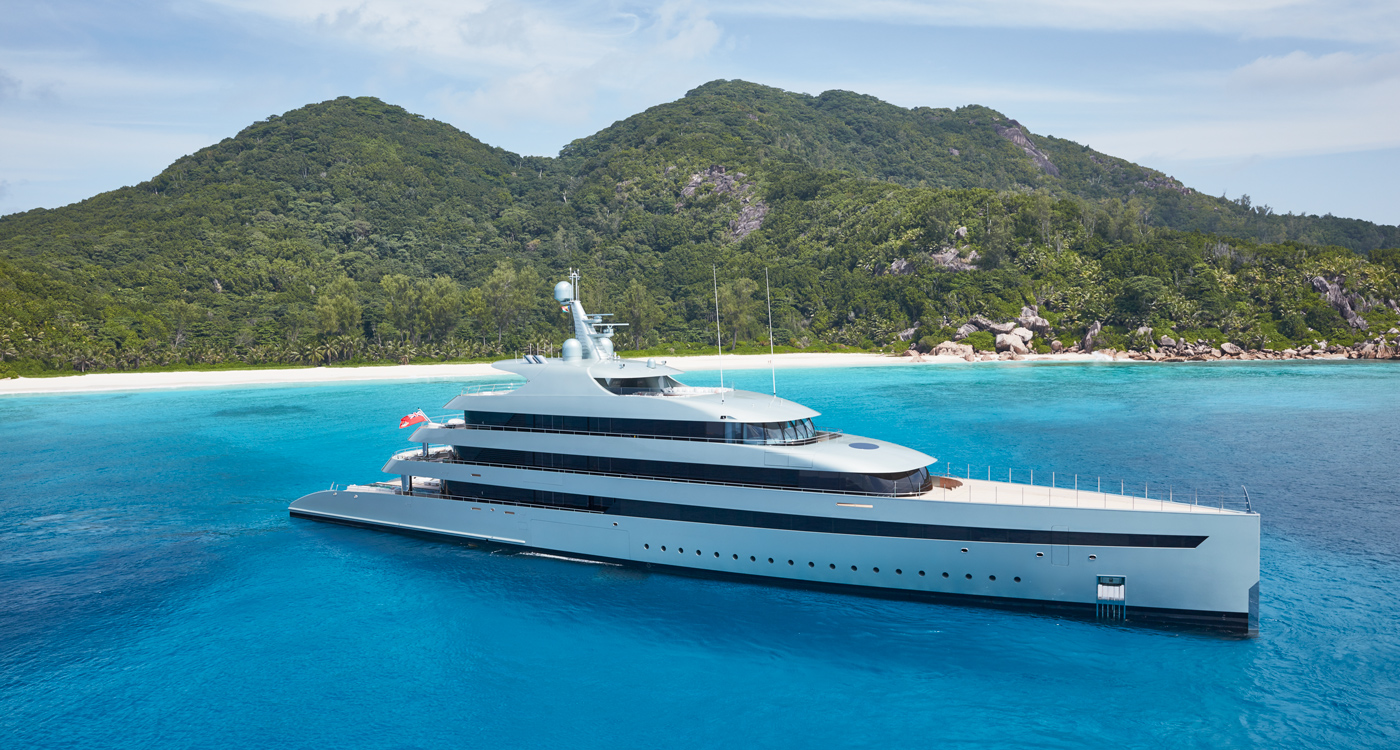 Finished in metallic sea-foam-green paint from the top of her superstructure to her waterline, including her outdoor ceilings and fixed deck furniture, Feadship calls it a “full metal jacket”.

Aided by a dynamic steel displacement hull, Savannah’s five-mode propulsion system (manoeuvring, diesel-electrical, range, high speed and boost) uses one efficient medium-speed Wärtsilä main engine instead of two higher-rev diesel motors, a single central propeller shaft installation on the centreline and three gensets. Redundancy is ensured by fitting a large contra-rotating and azimuting sternthruster just aft of the main propeller (which itself is 40 per cent larger than the norm), all of which results in fuel economies of 30 per cent, fewer vibrations and excellent manoeuvrability.

“It is not the individual technologies used on Savannah that are new in the yachting world – it is the way they have been combined,” commented the owner’s project manager, Ted McCumber at the time of delivery. “The possibility to choose between diesel, diesel-electric or fully electric is truly exceptional. Moreover, Savannah is the first yacht in the world to be running with an azipull and a variable pitch propeller.”

“Another major innovation is the batteries, which were suggested by the owner,” adds Feadship director Henk de Vries. “These provide extra speed at the top end, allow proper loading of the generators at any speed and facilitate super-quiet cruising at slow speeds without any engines turning.” 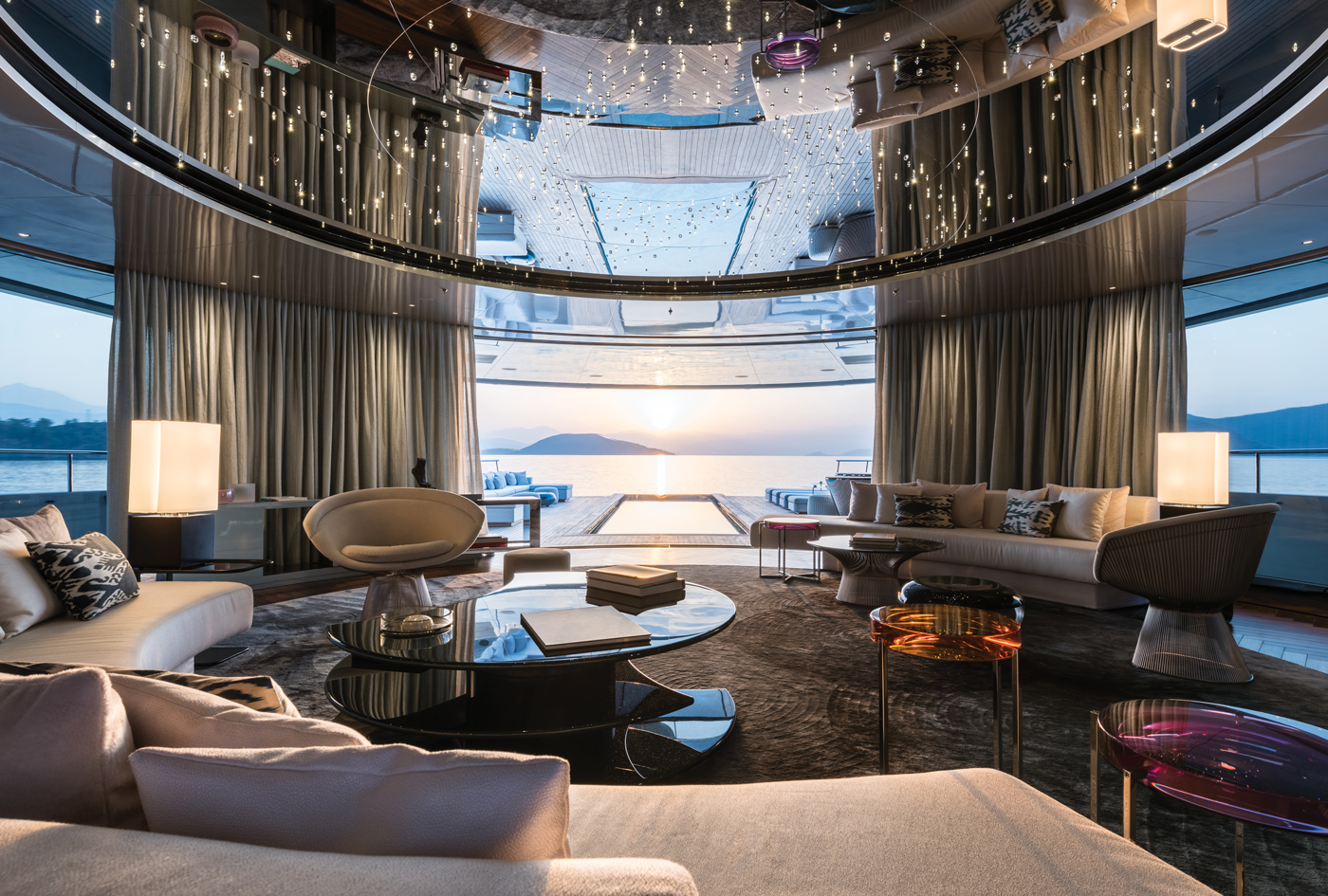 But Savannah’s technical innovations don’t stop at hybrid propulsion. A floating superstructure, underwater lounge and full metallic paint job catapulted the yacht into the record books, accumulating world firsts as though they were going out of fashion. Designed by CG Design in partnership with Feadship’s in-house team, Savannah’s exterior dark glass and composite panels appear to make the superstructure float without any support. This gives the yacht a highly striking and paired back profile, whereby the sleek design elongates the yacht’s already considerable proportions. 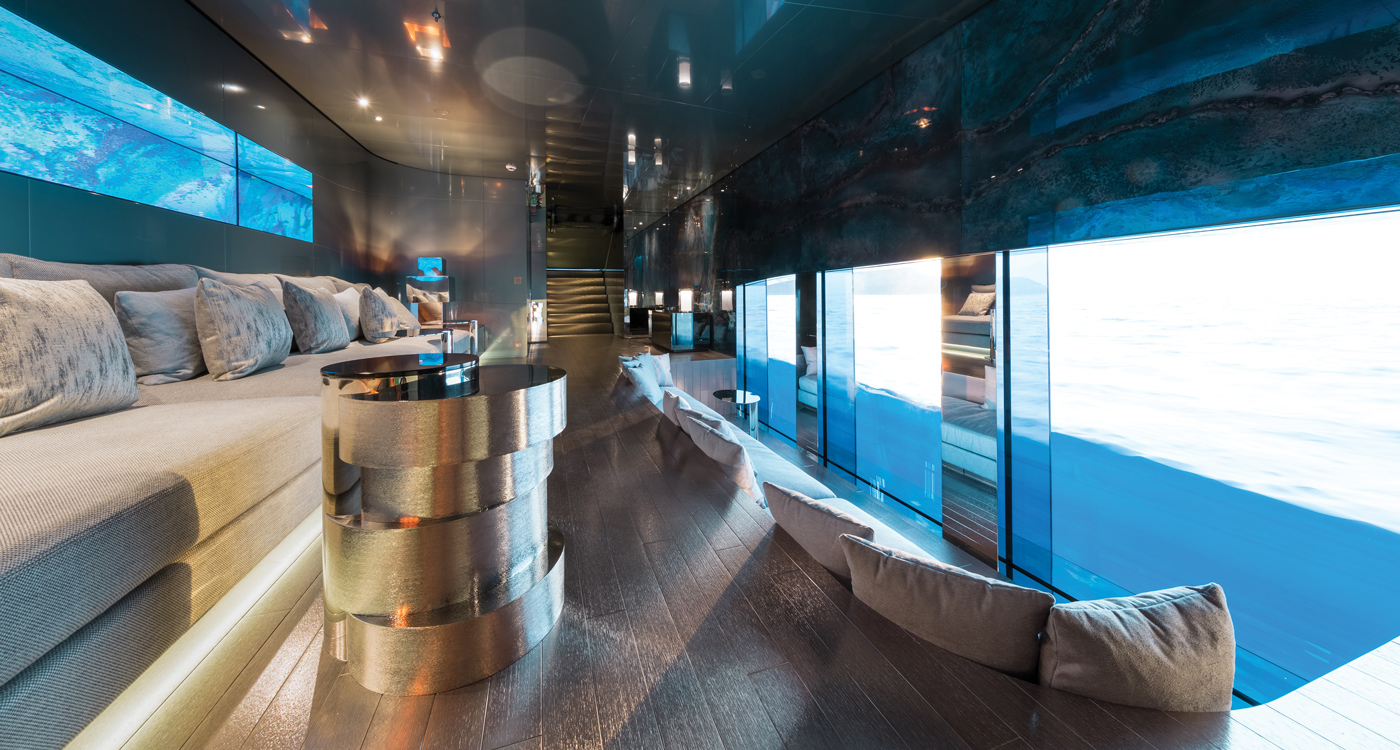 No boring white hull or superstructure. No external staircases. No dining table in the main deck salon. No glass lift dominating the central foyer. No long, straight hotel corridors leading to guest suites. And the superyacht industry’s first underwater lounge. Cristina Gherardi Design (headed by the former lead designer of the Armani/Casa Studio) had a field day redefining superyacht design with Savannah, the world’s largest hybrid-powered motoryacht, even four years on.

“The impression that the glass and composite panels of the superstructure seem to float on the decks is complex visual trickery involving polished stainless-steel strips, aluminium supports and teak,” says Cristina Gherardi Benardeau, founder of CG Design. “We pushed Feadship quite hard to keep the simplest of lines and people rarely realise just what a challenge that is for a yard.”

Designed around the owner’s love of the water, both the aft owner’s deck and main deck can be opened up to reveal large inside/outside spaces, sealed off when needs be by sliding doors; the entire space from the swimming pool to the salon serves as a comprehensive al fresco zone. “This phenomenal design allows him [the owner] to run from the main salon and dive straight into the sea,” explains McCumber.

The connection to the ocean is further enhanced by way of an underwater lounge, where guests can view tropical marine life on one side or turn around and observe the fun and games in the nine-metre swimming pool on the other.

“Technology and functionality come together with comfort and glamour throughout the interior,” says Gherardi Benardeau, who was also tasked with designing Savannah’s delicate interior. “The main inspiration is cinematography and contemporary design, with select pieces of furniture chosen to complement the owner’s art collection.”
This nod to an appreciation for art even relates to the Sea Foam metallic green exterior paint job. Savannah is the first superyacht to have ever been entirely metallic painted. Feadship is renowned for its flawless paintwork, but in order to avoid any colour discrepancy Savannah’s all-metallic look had to be achieved in one sweep. This was made possible by using a special electrically-charged spray nozzle devised by the yard that ensured all the metallic paint flakes were applied in the same direction. Savannah remains the largest metallic-painted object to date.

Since Savannah’s delivery, Feadship has delivered and is currently building several yachts with hybrid propulsion systems. “An electric drive on the gearbox for slow speed sailing and batteries for peak shaving is now almost standard,” says Feadship’s Head of Design, Ronno Schouten. “We have also built complete diesel electric yachts, which we see as the most logical choice for the near future. Diesel electric enables the choice for alternative energy supplies, such as batteries and hydrogen, and we expect that in the future we will be able to completely omit diesel engines in favour of more sustainable sources of energy. Having said that, the hybrid system setup on Savannah still offers increased efficiency because of the hydrodynamic advantages.” 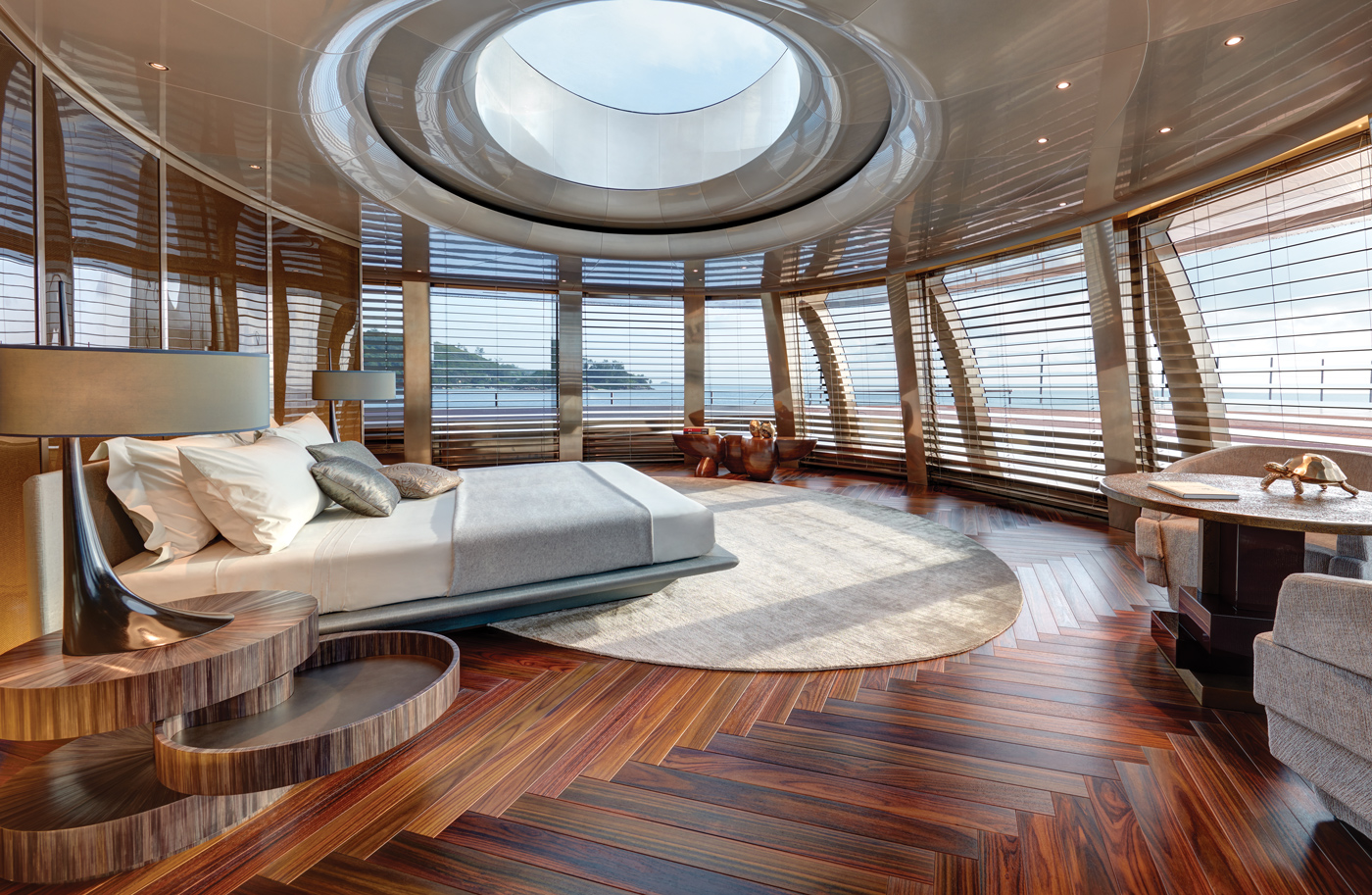 With its palette of white, beige, taupe and browns, Antonio Santella, vice president of sales and marketing at Sanlorenzo describes Seven Sins’ interior as “a good reflection of the modern aspect of the m to the upper deck so as to make way for a cinema and an owner’s suite at the bow.