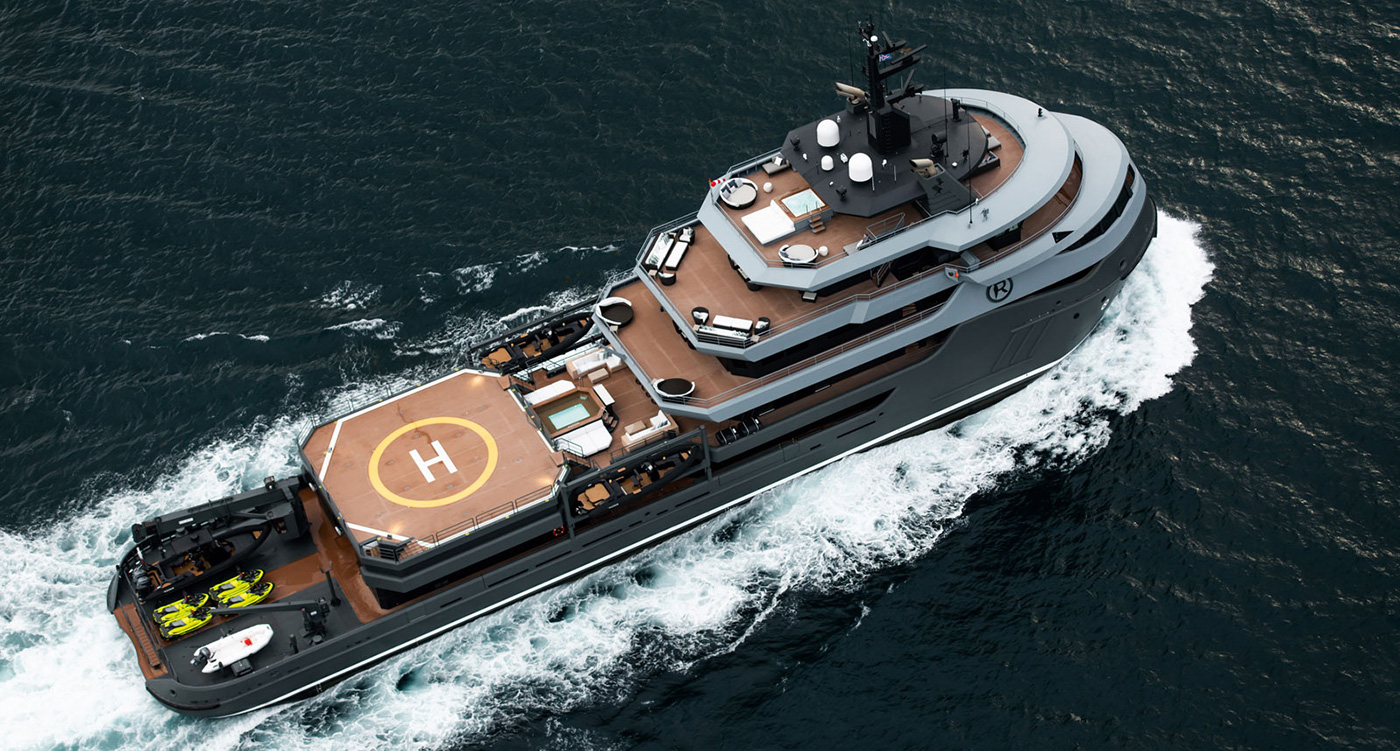 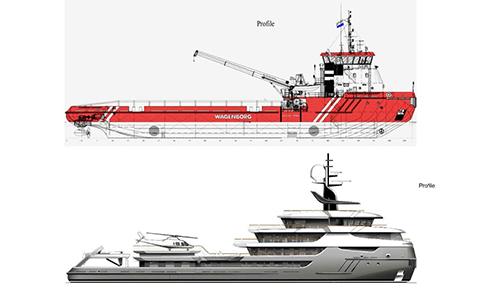 ABOVE: Ragnar’s transformation was carried out by Icon, which made a name for itself in refits after converting the 73-metre Giant into the 77-metre Legend in 2016.

Some yachts are bought to look pretty on the Med. Others are born to sail the Caribbean trade winds. And then there’s Ragnar; half yacht, half commercial vessel. A beautiful mongrel designed for exploration and built to last. In her former life, she was a 68-metre icebreaking support vessel named Sanaborg, launched in 2012 but then cast to one side. On a serendipitous trip to Icon Yachts, an owner on the hunt for an Arctic explorer conversion project spotted the decommissioned vessel languishing outside the Dutch shipyard. And the rest, as they say, is history.

Using Sanaborg as a platform, the owner drafted in British design firm RWD (Redman Whiteley Dixon) and quickly set about sketching an exterior that closely resembles Ragnar as she is today: a celebration of medieval war craftsmanship and her namesake Norse warrior king. “But why go to the trouble of converting a vessel?” I hear you ask. “Why not start a new build from scratch?”

“This owner was on the hunt for a real Arctic vessel, and that’s what he found,” says Leon de Haas, Project manager at Icon Yachts. “Sanaborg was a work horse, built to be self-supporting. She had ice class and was capable of sailing through real Arctic areas. She was a rugged commercial vessel, and that provides a completely different starting point to adopting a luxury yacht into an Arctic vessel.” 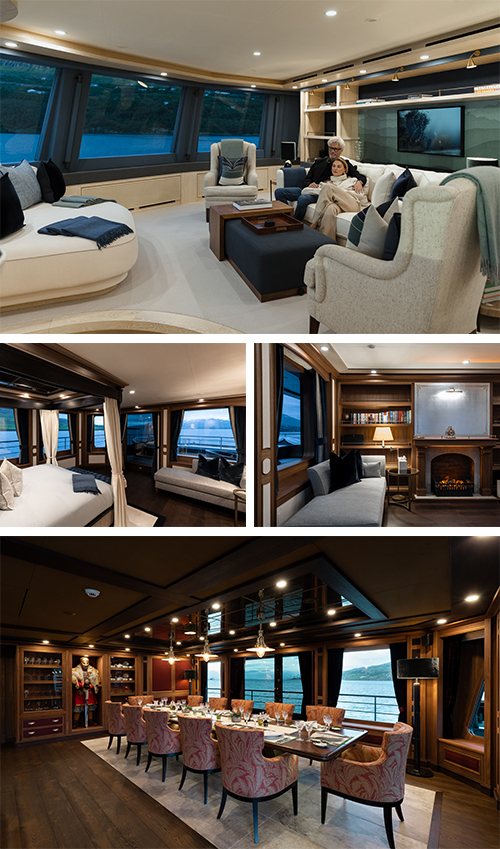 TOP: Ragnar’s observation lounge, and its open-air terrace, are built right into the nose of the yacht. You’ll notice that this area – as well as that of the guest cabins – is finished with bleached oak and light, neutral colours. CENTRE: Conversely, the two identical master suites (located on the same deck as the observation lounge) feature dark-stained walnut, just like the common areas. BOTTOM: The plan had been to find an artwork for the niche at the end of the dining table. Instead, the owner opted for some full-size Ragnar armour.

Commercial vessels are generally built from thicker steel, from the hull to the galvanized exterior railings that allow the captain to hammer off ice. There are no shiny finishes on a boat built to work hard. That said, there is more to a conversion project of this magnitude than sketching a sleek yacht profile onto a commercial platform. Ragnar, as she exists today, is a beast of a boat.

A total of 900GT were added to the 68m conversion during the rebuild, now totalling at 2,450GT. The previously empty aft deck now contains Scandi-chic guest areas, including two symmetrical owner cabins (and total accommodation for 16), a 14-seater dining area equipped with its own gentleman’s bar, and a large toys and tender garage. On the previously flat superstructure forward, a glass-fronted observation lounge enabling guests to drink in the floating glaciers and frigid fjords now takes centre stage. A sundeck jacuzzi sits waiting to warm up guests who have taken the obligatory polar plunge. And let’s not forget the fully equipped spa, with massage room, sauna and steam room.

Arctic explorer capability gives the LY3-classed vessel the power to handle temperatures as low as -35°C and maintain a speed of four knots in ice over half a metre thick. Her full ice breaking functionality even includes two electric thruster pods with ice churning propellers, two original 1750 kW electric engines and newly fitted generators. “If you turn the vessel around with her aft towards the ice and then start rotating the propellers in reverse, you really can churn the ice,” says de Haas. “It’s incredible what these thick and sturdy propellers can do.”

The enlarged technical areas now accommodate necessities like additional black water treatment and HVAC systems, and the crew area has been upgraded. But the overall layout remains largely the same, save for the wheelhouse which has sacrificed its rear-view sight line in favour of a luxurious panoramic upper saloon with space for outdoor dining.

“We invited the original captain of Sanaborg on board for the sea trials and he knew his way around so was able to sail the yacht immediately, although he was really excited to see what we have done with the boat,” says de Haas.

Ragnar’s 6,000nm range gives her the necessary autonomy required for her owner’s progressive itinerary. She carries an Airbus EC145 helicopter (with a maximum take-off weight of 3.5 tonnes) for heliskiing as well as a three-passenger submarine to explore below depths. Supporting the mothership is an 8.9m Marell ice condition tender, two 7.5m Castoldi jet tenders, four jetskis, four snowmobiles and four quadbikes. Unsurprisingly, Ragnar has already proven to be a popular charter option since her delivery in September this year, despite having not even been originally conceived with charter in mind.

“In the beginning, the owner’s intention was to keep Ragnar as a private vessel that he could sail on to the Arctic with his family,” explains de Haas, “but the idea to charter has gradually evolved.” 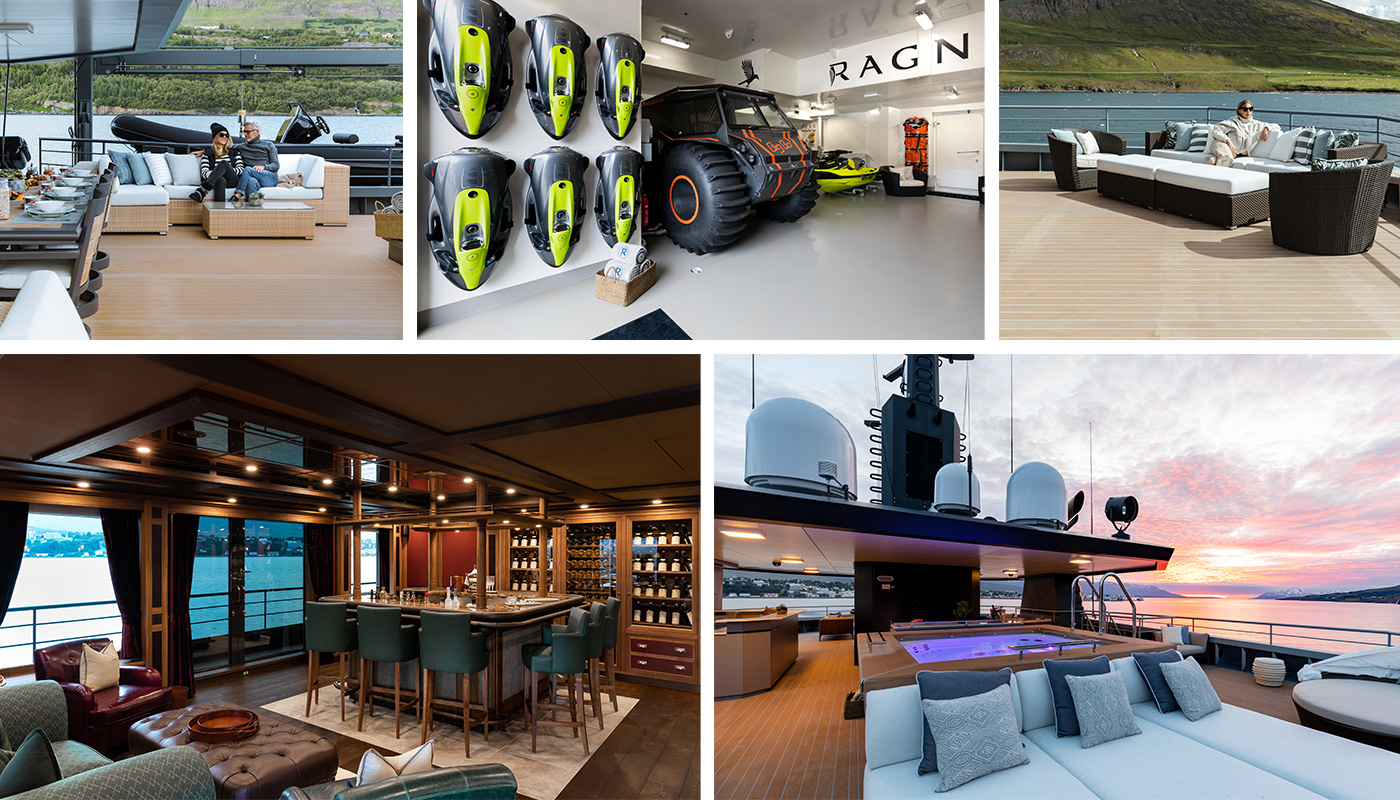 TOP: Under the helideck is a hangar for a three-seater submarine, a BigBo amphibious vehicle, four snowmobiles, four quad bikes, four jetskis, two hydrofoil boards and six Seabobs. There’s even a heli-skiing changing room there, with space for skis, boards and bootwarmers. BOTTOM LEFT: An English pub-style bar can be found next to the dining room. BOTTOM RIGHT: The hot-tub in on the top deck but the outdoor pool is three decks lower.

It tuns out that the biggest impact that the decision to charter had on the boat is in terms of the types of toys it now carries. And the owner’s original practical approach to fixing toys on the aft deck evolved into a toy garage large enough to even accommodate an amphibious BigBo 4×4 SUV for craggy shore excursions. But for de Haas and the team at Icon, that challenge pales in comparison when confronted with the project’s optimistic build timeline. Completed from start to finish in a rapid two and a half years, Ragnar, which was delivered in June 2020, has been a force of nature from the very outset.

“From the moment I began on this project, I loved it,” enthuses de Haas. “It’s a unique project that hasn’t been done before, designed like a castle on water. It’s not your typical yacht and that is what makes it so special.”