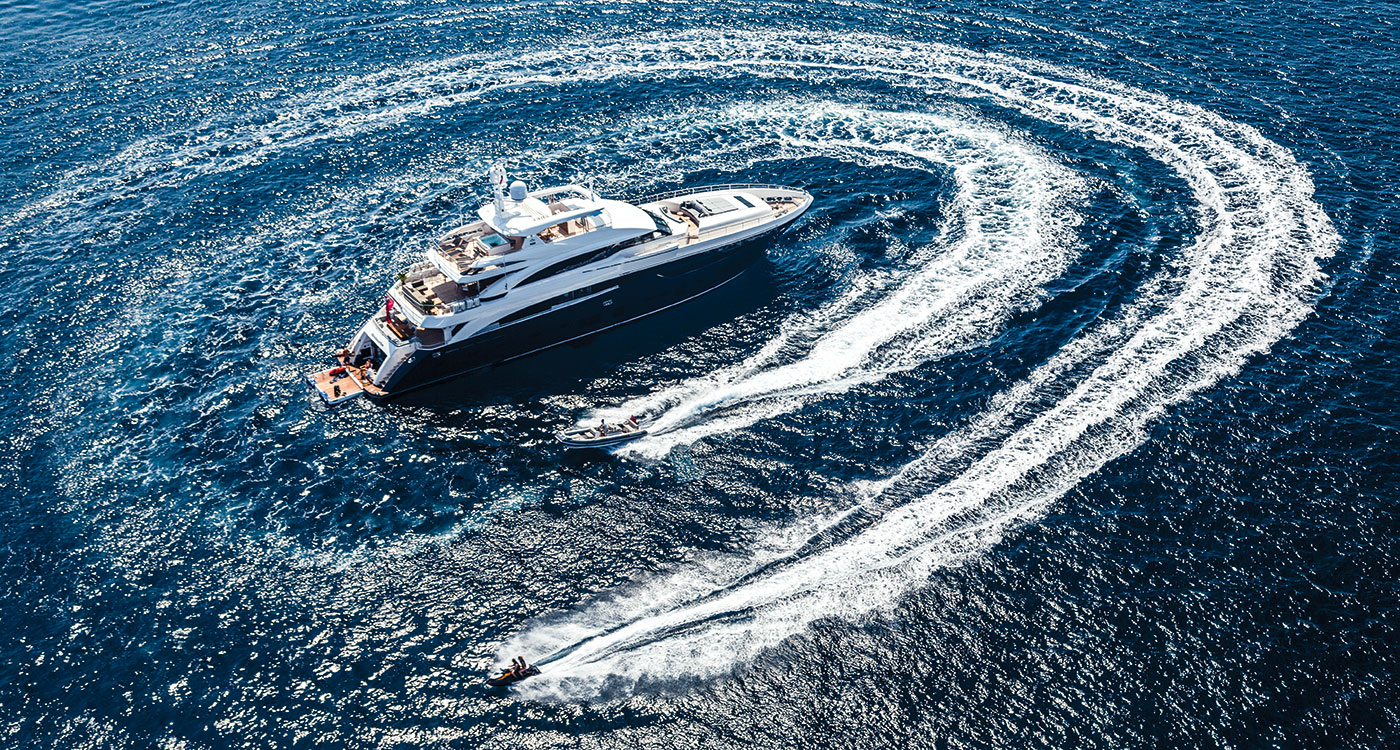 Behind the Scenes at Princess Yachts’ Growing Shipyard Lies the Secret to their Success
October 2, 2016 Sabi Phagura 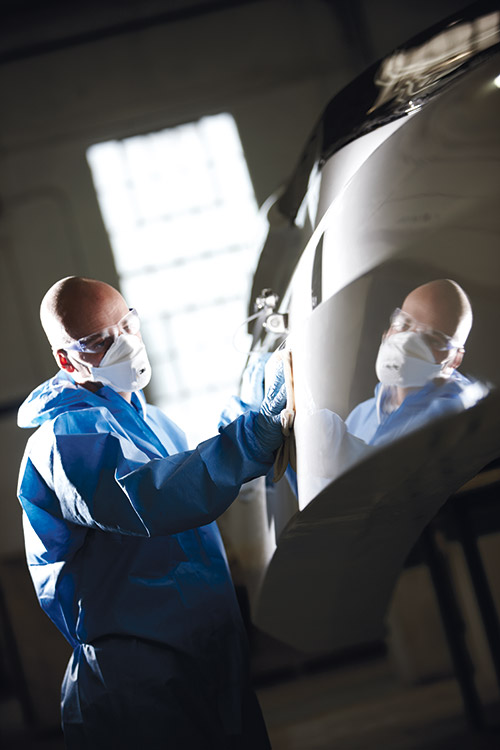 Founded in 1965, Princess Yachts now operates in 119 countries, employs over 3,000 people worldwide and boasts LVMH as its controlling majority shareholder

This may be an age of austerity but boat manufacturers that had previously plied their trade in the pleasure craft segment are now moving higher up the ladder, making semi-custom yachts in ever-larger sizes. And with Sunseeker, Riva and now Princess all entering this rarefied end of the market, it’s an opportune time to see how the most low-key of the trio – Princess, previously known for its solid and top-quality production boats – has managed to expand and become a maker of customisable little ships built to a standard that puts a number of tier-one yards to shame.

Princess Yachts is based, as it has been for the last 51 years, in Plymouth, a city in Devon on the south coast of England. Plymouth boasts one of the largest harbours in Europe, the largest fishing port in England, is home to the largest naval base in Western Europe and happens to be the place that 16 million Americans trace their roots back to, given that this was where the Mayflower famously set sail from in 1620. It also has a more glamorous side. Perched on the edge of the English Channel, this former trading post for the Roman Empire happens to be where Victoria’s Secret model Rosie Huntington-Whiteley was born and, for our purposes, it’s also where one of England’s finest shipyards continues to centre its entire production (entire being the key word).

Princess is a global brand – with over 46 distributors in more than 75 countries, a majority ownership acquired in 2008 by L Capital 2 FCPR, an investment fund created by LVMH and Groupe Arnault, but it’s also still proudly English. During a recent visit to the shipyard, we discovered a close-knit community of workers who are as passionate about their work as the buyers who order these yachts. There are over 2,000 employees here now, with an average length of service of 11 years, working on virtually every component used for the vessels in the loom, metal, mould and machine departments. Three of those employees are from three generations of the same family, a testament to the company’s heritage and its value in the Plymouth community.

To give you some idea of the sheer volume of work involved in building yachts, Princess uses 2.5 million metres of wiring annually. All the looms and harnesses are made for every boat within the factory, and some of the bigger boats contain over 59 kilometres of wiring, each. Moreover, Princess proudly uses an advanced engineering and manufacturing technique of resin infusion to make all of its hulls in-house, the size of which currently range from around 10 to 40 metres. 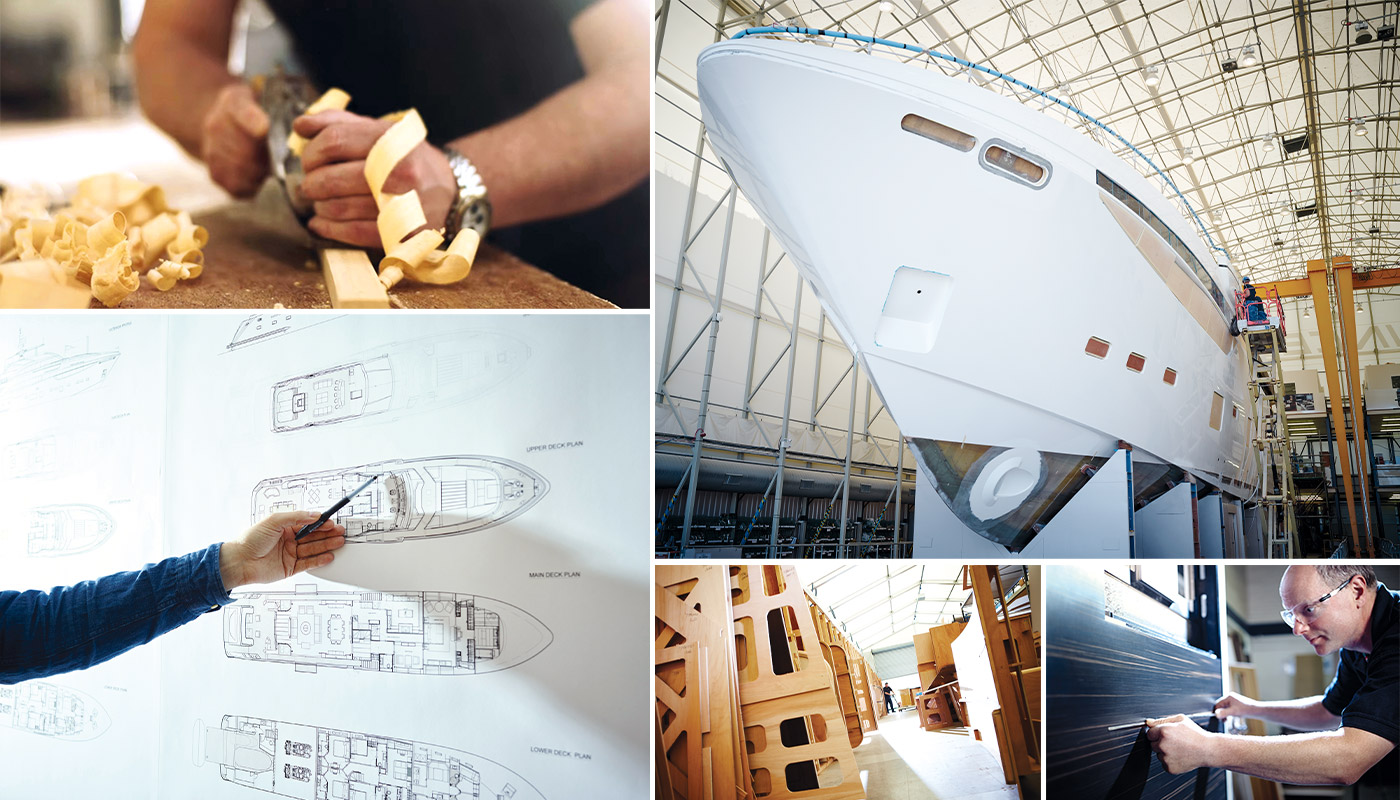 Across its seven manufacturing plants, Princess yachts has managed to raise production from 230 boats a year to more than 300

Princess’ newfound ability to build in the larger category of semi-custom yachts was formalised in 2011 by a 35 million GBP (50 million USD at the time) investment from its French private equity house owners, which was backed by a 4 million GBP grant by the British government’s regional growth fund. These funds allowed for a new construction facility at the company’s South Yard site, a former naval yard dating back to the 17th century.

Kiran Jay Haslam, Marketing Director at Princess Yachts, emphasised the importance of this expansion and how it allowed them to continue producing everything on site. “Every beautiful detail is crafted and finished within our Plymouth shipyards so that each step can be consistently monitored. From naval architecture through to the smallest components, we are able to fuse together two extremes – performance and luxury. We are unique not only in the yacht industry, but in manufacturing as a whole, because we create our products entirely in the UK.”

But before such products are ultimately handed over to their owners, the hands behind the creation get to enjoy a trip aboard, not only to ensure they leave the shipyard without a glitch but also to promote a sense of satisfaction after all the hard work that has been made.

Every beautiful detail is crafted and finished within our Plymouth shipyards so that each step can be consistently monitored. We are unique not only in the yacht industry, but in manufacturing as a whole, because we create our products entirely in the UK

During our visit, we were invited to join one such mission aboard a 75M’s maiden voyage. This flybridge is a fine demonstration of a highly practical and spatially balanced vessel. Her modified deep V-hull enables planing and control at lower speeds, and her twin engines allow respectable top speeds of up to 36 knots. Her overall length is just over 24 metres, but an efficient use of space makes her seem much bigger. Having taken the wheel and given her a good runaround, we found her to be strong, solid and exciting, and although the weather conditions were mild, we were assured she was more than capable of handling the roughest of conditions.

After this, we were taken over to see the handsome and somewhat timeless Princess 40M, the company’s largest yacht to date, and one that can claim to have the largest ultra-light resin-infused hull ever moulded on a yacht. Interestingly, the 40-metre project began at about the same time as the old 32-metre, which was launched at the London Boat Show in 2011 to wide acclaim. But given it was the marque’s first tri-deck yacht, the processes, the systems, build methodology, layout and regulations were all much more complex and therefore time consuming. As a result, the first model was only revealed last year but it didn’t take long to gain attention, taking home the 2016 World Superyacht Award in the Three Deck Semi-Displacement or Planing Motor Yachts category. As expected, her housing is sleek and sumptuous throughout, with a five-cabin layout, which comfortably accommodates 12 guests. There is also additional space for up to seven crewmembers. 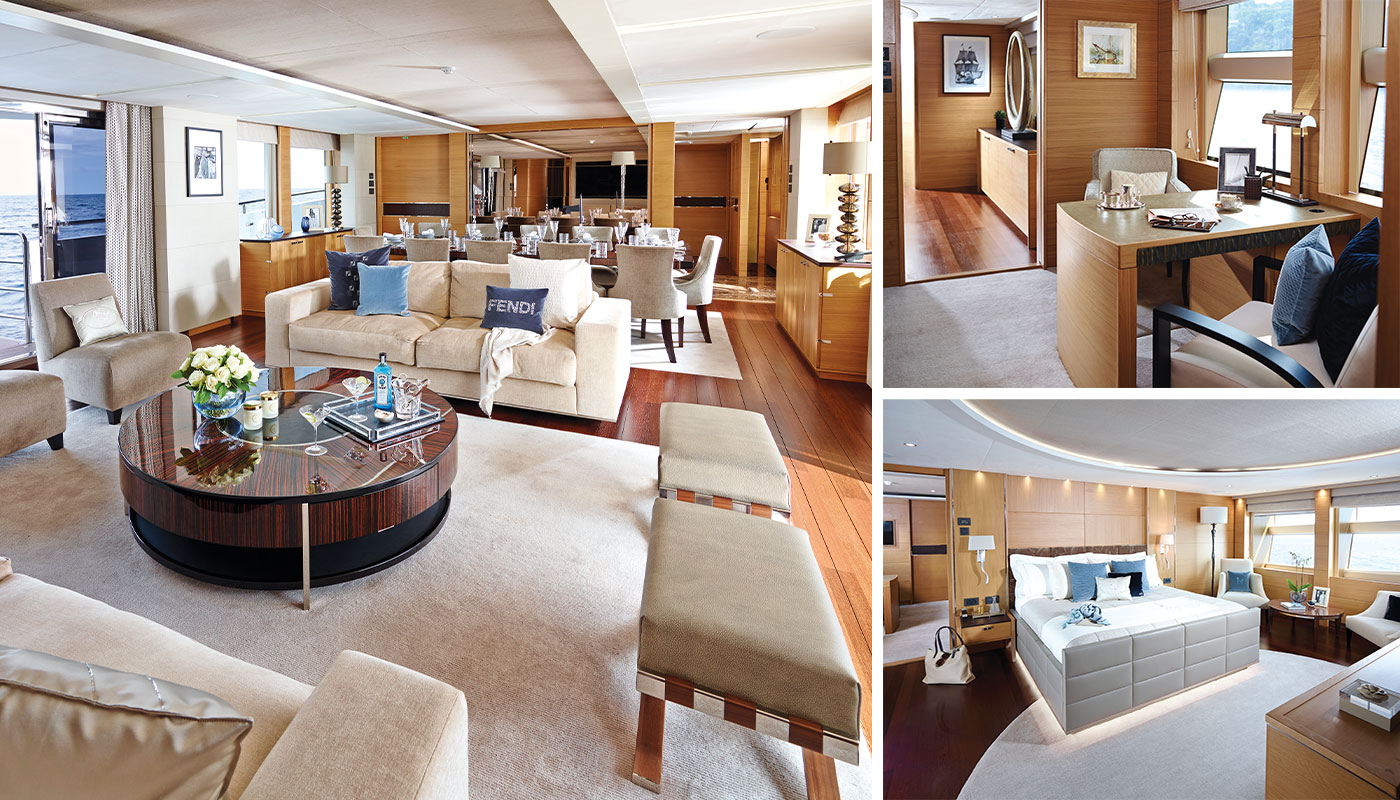 Princess had a long track record for producing semi-custom yachts before breaking into the custom market with its M Class range, including this 40M, which set the record for the largest resin-infused hull ever moulded

The 40M epitomises the brand’s high level of quality, luxury, performance and space. Deck spaces are well insulated and thoughtfully configured. The large main deck galley and the expansive views afforded by the newly designed hull windows show attention to detail. Furthermore, the aft garage (which can house a Jet Ski and a custom designed 6.5-metre RIB, while also offering a perfect relaxation spot over the water) has proven to be a big crowd pleaser at the various shows she has been presented at. Indeed, the 40M is a semi-custom yacht built with a number of features that are more commonly found on 50-plus metre custom yachts. One such highlight is the sound and vibration levels, which have been kept impressively low. Power comes from twin MTUs that muster a top speed of 23 knots. The cruising speed hovers around 12 to 14 knots, which gives the boat a fuel consumption rate of approximately 300 litres per hour and a range of 1,500 miles. The ultra-light high-tech resin infused construction, his-and-hers en-suites and the master cabin all make it stand out as the ultimate state of Princess’ art.

Of course, accolades speak louder than words and the company’s subsequent Princess 35M also managed to win a 2016 World Superyacht award, this time in the Semi-Displacement and Planing Two Deck Motor Yacht category. This particular M-Class semi-custom motor yacht is capable of long-range, low-speed cruising as well as light-speed port hopping. The 35M offers a choice of internal layouts to the prospective owner, in addition to three outdoor social areas.

The success of Princess’ 16 million USD 40M and 11 million USD 35M demonstrates the company’s ability to build some of the most technologically advanced semi-custom yachts around and it has proven just why they’re a force to be reckoned with when it comes to design and detail, both inside and out.

It’s amazing to think that the passion, drive, enthusiasm and success of Princess Yachts started as far back as 1965, when David King and two friends fitted out and chartered their first boat. An instant success, the boat was quickly sold. Over 130 units were subsequently produced of that model between 1966 and 1969, marking the beginning of what is today one of the world’s leading shipyards. David’s enthusiasm for boats has never waivered over the years and he is still deeply involved in new product development. To mark the shipyard’s 50th anniversary, the original boat took centre stage last year, when it was lovingly restored and displayed as a reminder of Princess Yachts’ past, as it navigates into the future.

Why the 171-Year-Old English Cobbler John Lobb is in Safe Hands With its First Ever Artistic Director, Paula Gerbase