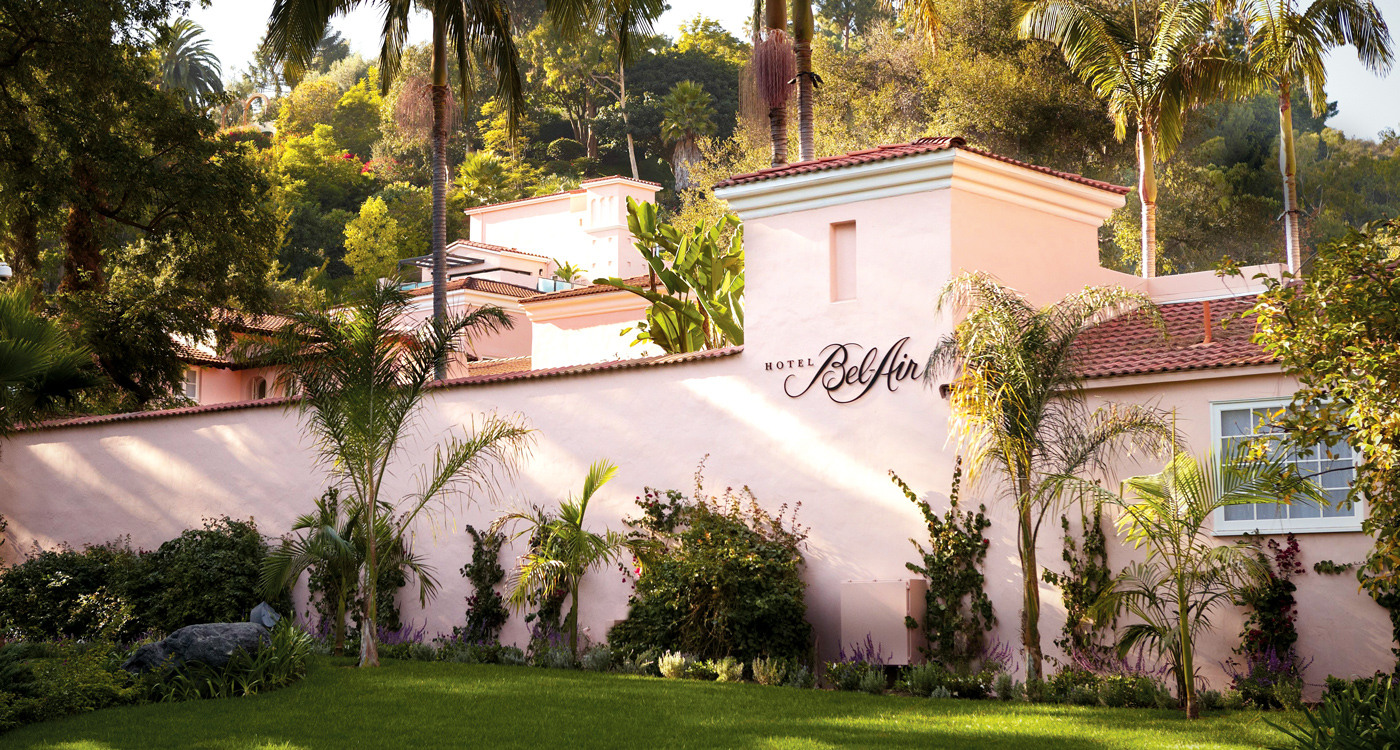 The Hotel Bel-Air is Probably the Most Elite Oasis Los Angeles Has to Offer and We Love it
May 9, 2013 Nicolas Shammas

Nestled in the canyons of Los Angeles, the Hotel Bel-Air has been a hideaway for moneyed world travellers for more than half a century. In American terms, that’s a heck of a long time. Thanks should go to Alphonso E. Bell of course because without him, there would be no Bel-Air, let alone a Hotel Bel-Air. 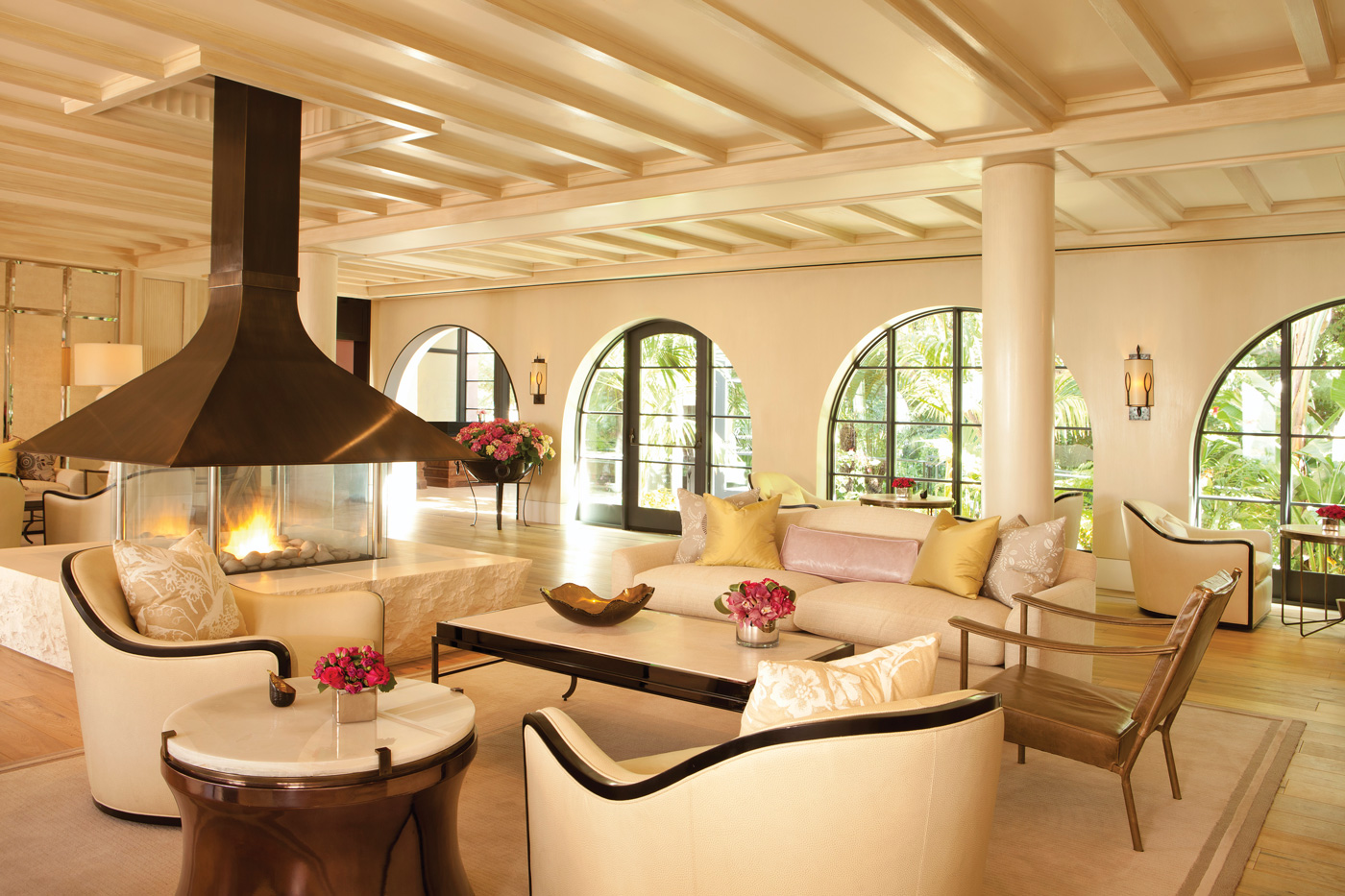 Born in 1875 in Southern California, the former rancher struck oil in the early 1920s and with his newfound wealth, decided to diversify into real estate. With uncanny prescience, Bell anticipated the emergence of a Hollywood elite along with an influx of wealthy residents lured by the burgeoning film industry and to that end, concentrated on developing upscale real estate communities. Apart from his contributions to large parts of Westwood, Beverly Hills and the Pacific Palisades, it is for his most ambitious project that Bell will forever be remembered.

After buying a 240-hectare plot west of Los Angeles, he set about building the most exclusive and upscale neighbourhood of all. Bell (modestly) named it Bel-Air and even went so far as to enhance the surrounding area with new roads, utilities and a country club, all set in lush, exotic vegetation. 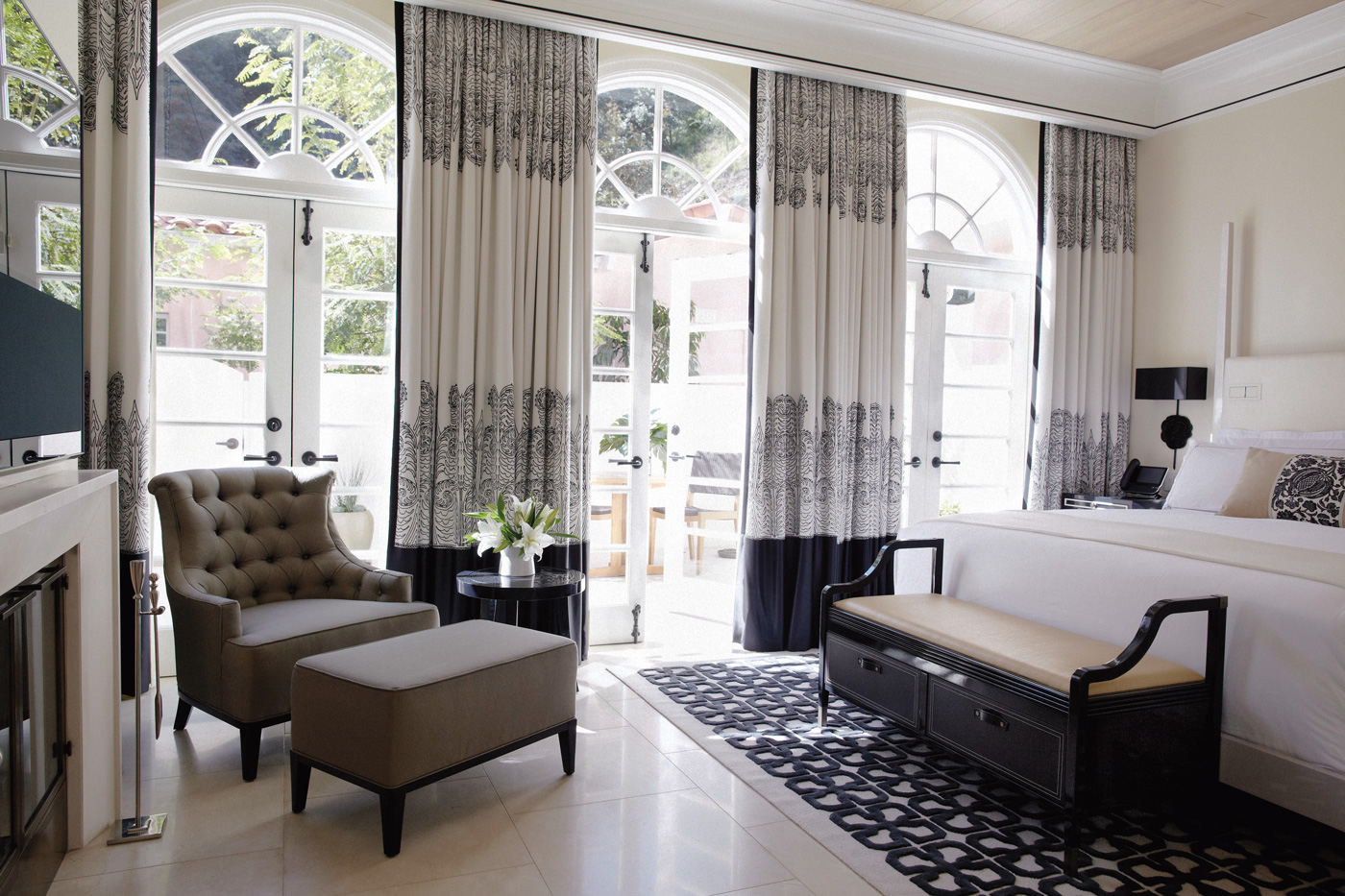 Funnily enough, he did not envision building a hotel and what is now the Bel-Air’s main Mission-style building was originally the community’s estate planning and sales offices, which were located next to the Bel-Air Stables, from where residents set out to enjoy the miles of equestrian trails winding through the canyons.

For the next few decades, Bell’s dream flourished. People rushed to buy land in his community. In 1946, a hotel entrepreneur from Texas by the name of Joseph Drown, purchased 18 acres (including the sales office) and began his plan to create an elegant, pastoral hotel hideaway. Drown hired architect Burton Schutt to convert the buildings and construct the 62 rooms of what was to become Hotel Bel-Air. Schutt closed the stables, converted them into rooms, dug up the riding ring to create a swimming pool and transformed the grounds into verdant, beautiful gardens, adding the now-famous swan lake to the picturesque front lawn. It was, as it remains, a Californian oasis of palms, ficus trees and acres of flowers.

The hotel opened in August 1946, instantly becoming a favourite of the rich and famous, drawing the likes of Bette Davis, Humphrey Bogart and Marlene Dietrich. It has remained that way ever since. Grace Kelly lived at the hotel before she married Prince Rainier of Monaco. Marilyn Monroe posed by the swimming pool for photographer Bert Stern just six weeks before her death and later, Tony Curtis would live here, going on to describe the place as the “best wife” he’d ever had. “If I could, I would marry Hotel Bel-Air tomorrow,” the legendary rake once said. “She doesn’t ask me where I’ve been all night. She doesn’t mind if I bring a girl home. She makes my bed every day, feeds me regularly, takes my messages faithfully and puts my laundry in the little boxes tied up with ribbon.”

Because of the hotel’s unique draw, its devoted clientele feared the worst when at the end of 2009 its current owners, the Sultan of Brunei’s Dorchester Group, closed the property for a two year, 100 million USD renovation. They need not have feared. It was money well spent. The distinctive clay-tiled, pink stucco, Mission-style architecture emerged unscathed, belying the changes that went on within.

LEFT: To enter the property you must cross an arching stone bridge over a small lake, home to several generations of Polish Mute swans. RIGHT: The rooms are connected by brick paths lined with sycamore trees, bougainvillea, and flowering gardens

Hospitality specialist Alexandra Champalimaud transformed the lobby and the guest lodgings while architect David Rockwell took responsibility for the dining and entertainment spaces. Gone is the traditional style décor, replaced by Rockwell and Champilaud’s more contemporary interpretation of Hollywood majesty and glamour. LA’s most sought after chef, Wolfgang Puck – who is famously the chef to the Oscars – was brought in to revitalise the restaurant, which has a new expanded outdoor seating area, that can be covered and heated in winter, making it usable year round.

Other changes include a new hillside annexe containing 12 new suites with canyon views and a 1,100-square-metre La Prairie spa facility with three loft-style guest rooms installed on the floor above. Each of the 58 rooms and 45 suites is decorated slightly differently but all follow a general aesthetic of neutral tones and rich fabrics with sleek marble floors and high-end modern furniture. This being one of the world’s entertainment capitals, they also come tricked-out with the latest gadgets, including Bang & Olufsen entertainment centres combined with a dedicated iPad from which you can control the temperature, draw the curtains and order room service.

While some of the hotel’s more mature guests have complained that the technology is a bit tricky to master, in all honesty it’s pretty straightforward. Apparently, 75 per cent of room service orders are now done via iPad rather than phone, so evidently it’s working for the vast majority of people.

For all of its changes, the Hotel Bel-Air still stands for all the same things it always did. Exclusive and tranquil, it was recently described by an aging aspirant to the British throne as being a bit “like staying at a rich friend’s home”. See why we felt compelled to let this little secret out? 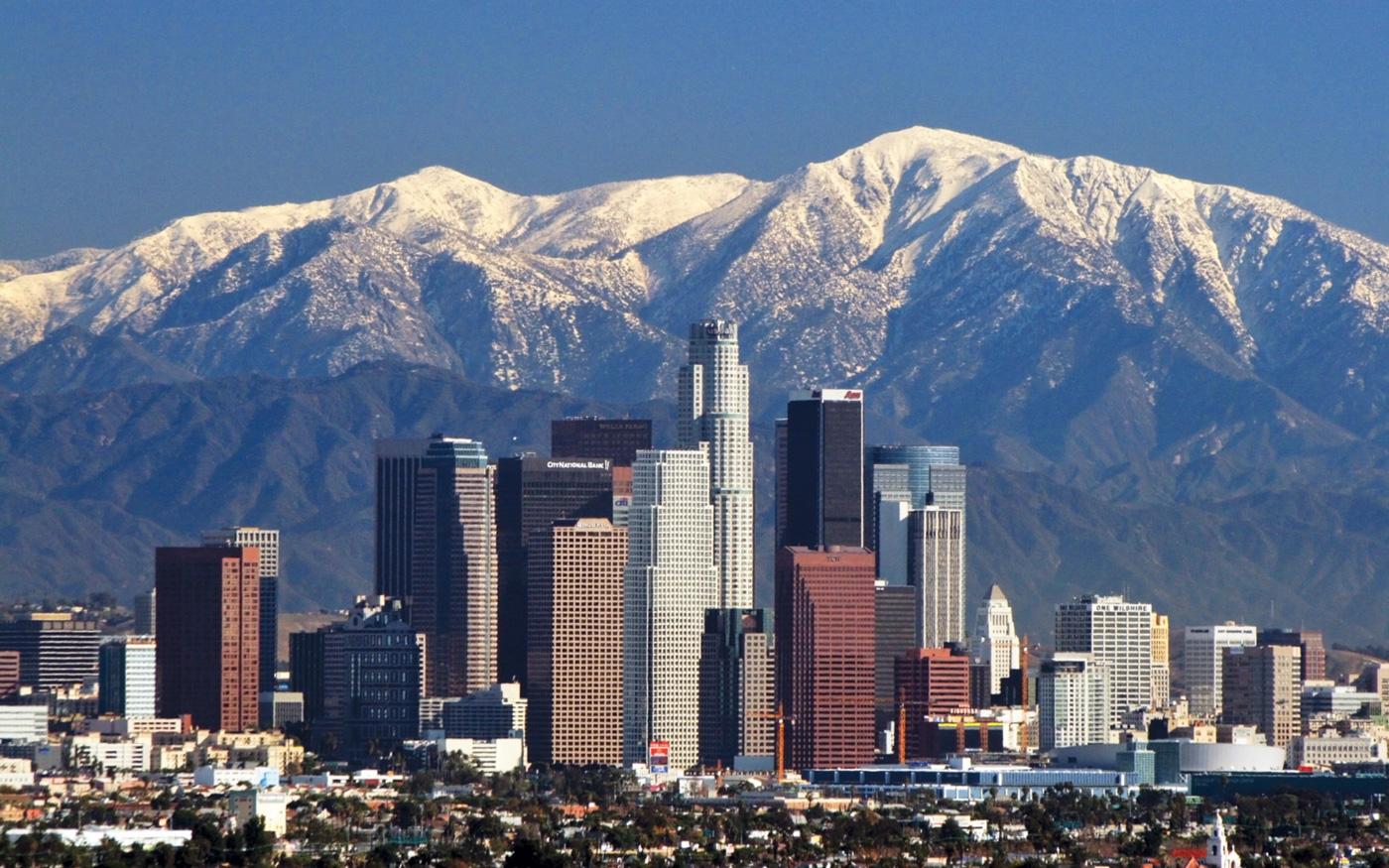 Day One – Venice
Eat Lunch at Gjelina
An incredibly popular Venice hipster hangout that (rather unusually) serves small portions. The idea is to order a wide array of dishes to share amongst friends.

Shop at Abbot Kinney
Some say this boulevard is the coolest block in America. All we know is that we love this concentrated stretch of forward-thinking indie retailers.

Down a few at High
Located on the roof of the Hotel Erwin with stunning views of the Pacific, this is the perfect sunset watering hole. Afterwards? Head to the Bungalow at the Fairmont and thank us later.

Day Two – Hollywood
Take a gander about LACMA
Conveniently located on Wilshire Boulevard, this museum has over 150,000 works of art in addition to one of the best restaurants in the city – Ray’s.

Drinks at Chateau Marmont
If you’re looking for a cool spot to people-watch, drink and eat delicious food, this is it. The burger is a crowd favourite but we’d recommend the grilled chicken, which is out of this world.

Party at Sound Nightclub
In a city of capricious partygoers, Sound has a novel way of staying fresh. Its walls are covered in video screens that display ever-changing content so your experience is never the same twice.

Day Three – Downtown
Tour the MOCA
Los Angeles’ only contemporary museum, MOCA specialises in art created since 1940. There are two other locations (one on North Central Avenue – which is reopening in April – and the other on Melrose) but Downtown is the main branch.

Dinner at Bäco Mercat
With a deliciously inventive menu, smart urban setting and late-night hours, this restaurant is currently the number one hotspot for trendy Angelenos.

Drinks at Perch
Boasting an impressive cocktail menu, panoramic views, live music and a palpable lack of pretension, Perch is a rooftop bar where you can relax in style.