Places | Categories | Hotels | We Stay at Franco Zeffirelli’s Old Holiday Home, Which is Now One of Positano’s Most Exclusive Boutique Hotels
PLACES | Hotels 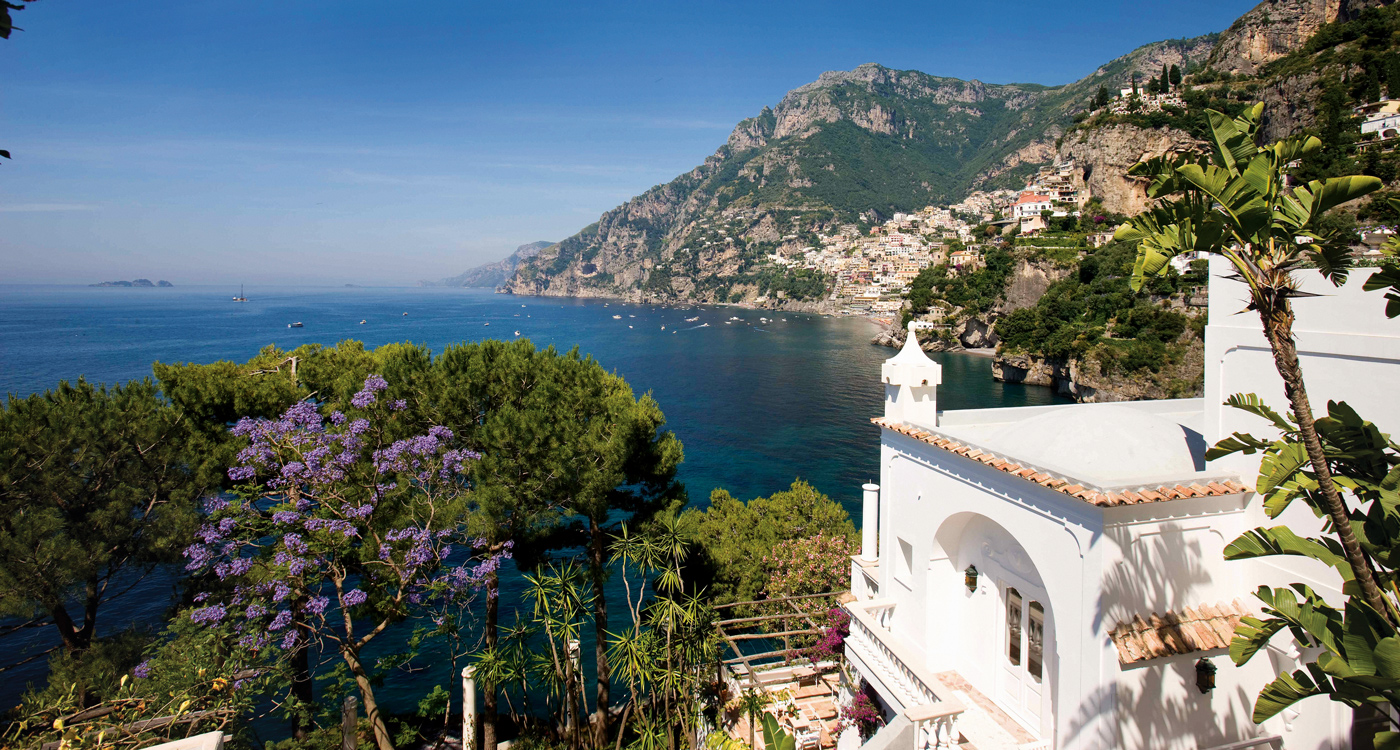 We Stay at Franco Zeffirelli's Old Holiday Home, Which is Now One of Positano's Most Exclusive Boutique Hotels
June 3, 2013 Nadine Khalil 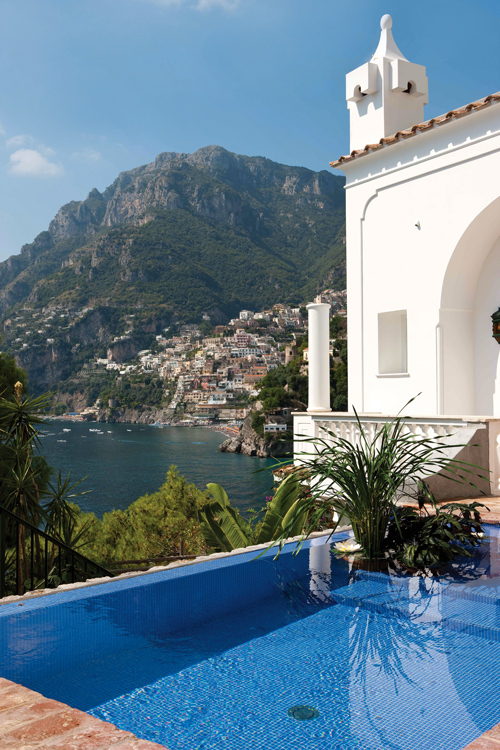 Sheltered bays, steeply terraced gardens and tiny, stucco houses that seem to ascend straight from the deep blue sea, the Amalfi coast is a startlingly beautiful place. A visit to Franco Zeffirelli’s former private estate-turned boutique hotel, Villa Tre Ville, casts it in the light of its splendid past.

I am alone. From my vantage point on a precipice on the Amalfi coast, the sunset-streaked houses of Positano appear dramatically in shades of rose and yellow.

Even before getting here, as you turn each hairpin bend, another pastel-coloured village appears, like a secret enclave clinging to the cliffs. It’s like a captivating game of hide-and-seek.

I am alone here because Official Bespoke was granted the opportunity to enjoy Villa Tre Ville before it officially opened this year but it’s not as lonely as it sounds.

On the misty morning I arrive, clouds touched mountaintops along the sinuous road from Napoli. The air is still a bit chilly as I step out onto the veranda, shaded by the grapevine pergolas. I can hear household chatter and clinking in the kitchen as I admire the fountain’s hand-painted Vietri tiles. Breathtaking views surround me.

It’s quite a scene, one that plays out on the different levels that make up the Tre Ville’s four villas and 15 suites. “I challenge you to tell me how many ‘floors’ there are,” hotel manager Ferdinando Alfano says jokingly when I ask him exactly that.

Each of the (now four) villas – Rosa, Azzurra, Bianca, Tre Pini – are located on different platforms. I count about nine levels as we walk the connecting trails, but it really depends on which path you take. A winding stone passageway takes you to a garden of jasmine and cascading bougainvillea and then descends to the sea. A lift cut into the cliff takes you from the reception 33 metres down to the main living and dining areas. The gilded frames of the reception present the magnificent outside as if it were a still-life painting rather than merely windows.

Tre Ville is, in essence, still the impressive home celebrated director Franco Zeffirelli left behind. You’ll find his porcelain collection, his books and reminders of the stars, from the worlds of ballet, opera and film, who stayed here.

I’m put in a marine and cream-coloured room named after Sergei Diaghilev, the impresario who founded Les Ballets Russes. He was a frequent guest in the 1920s, when Tre Ville was owned by the Russian writer Mikhail Semenov – Zeffirelli bought it four decades later. From the start, the Tre Ville has been an enchanting hideaway that has drawn intellectuals, artists, dancers, musicians and actors. 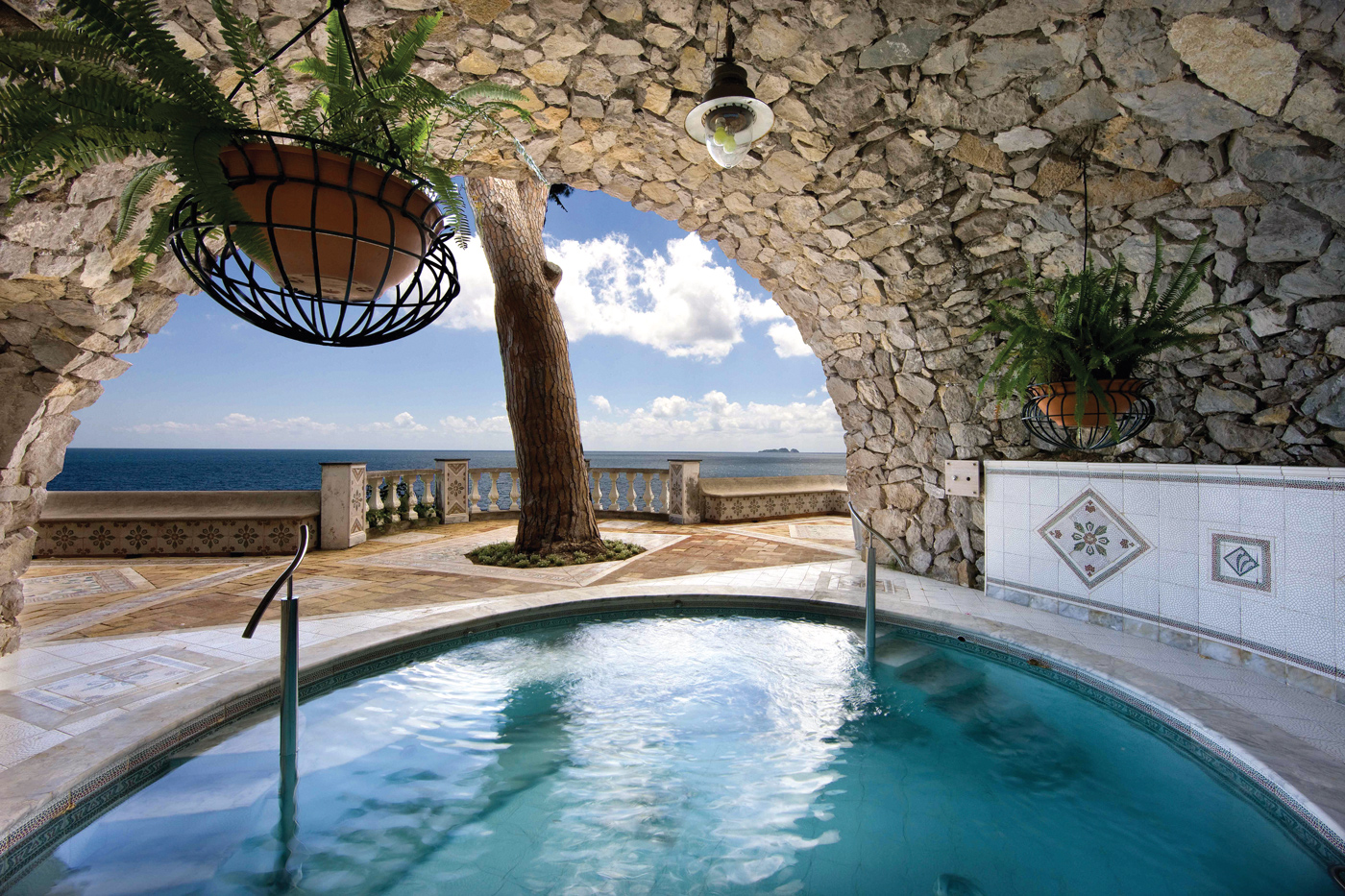 After achieving fame as an opera and film director, Zeffirelli bought the property and threw himself into realising its potential. “Now I could start creating my dream world out of the three villas,” he wrote. “I added terraces and verandas, stepped gardens and little secret walkways with hanging plants. I constantly add to it: a grotto, a new bathing place, a vegetable garden.”

“Vaslav Nijinsky used to dance right here,” Alfano tells me, pointing to the terrace I’m standing on. A suite is named after him, others after legendary soprano Maria Callas and composer Leonard Bernstein. Tre Ville is where Bernstein wrote the soundtrack for the film ‘Brother Sun, Sister Moon’ and where some of Zeffirelli’s major theatrical masterpieces were conceived. “The Maestro brought many people here. Elizabeth Taylor, Elton John, Lawrence Olivier,” Alfano continues, “but after 35 years of living and working here, he left and never came back.” The now 90-year-old sold the property to hotelier Giovanni Russo in 2007 when the stairways became too difficult to climb.

After a three-year renovation by Fausta Gaetani, the Tre Ville was re-opened, its old-world glamour combined with lavish, high-tech modern amenities, especially the new bathrooms. Some are bedroom-size and most come with expansive views of the rugged coastline. Each room also comes with a set of binoculars, a private motorboat on call and a bar with full-sized bottles, rather than those silly minis that are standard at most hotels. 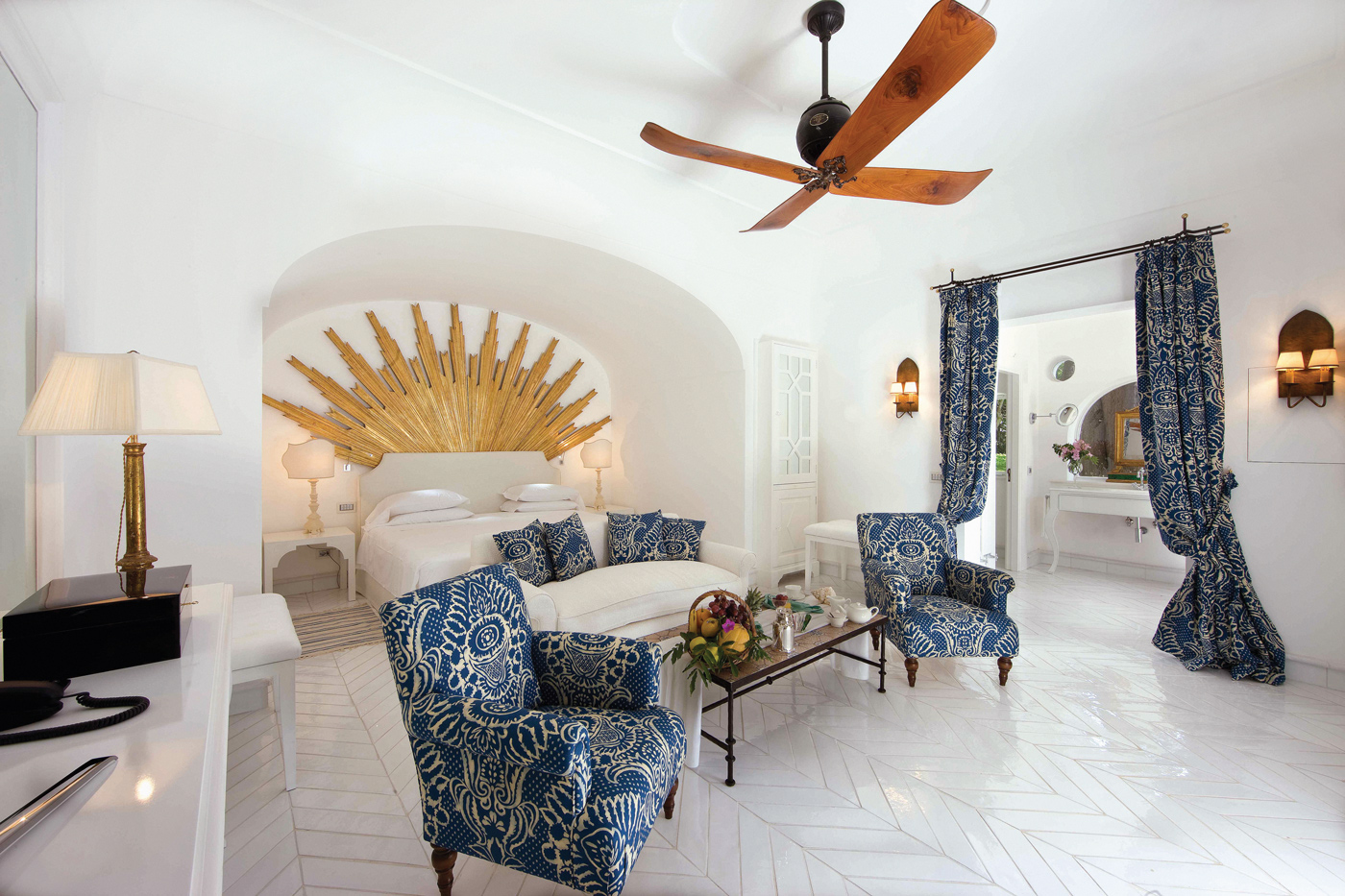 In Gaetani’s work, you’ll find the decorative elements you’d expect in Italy – Murano chandeliers and colourful hand-painted tiles – but there are unexpected ones, too.

“We found this round room with a fantastic old brick ceiling,” Gaetani tells me, adding that it was an old bread oven. “So we built a huge marble shower in it, leaving the original ceiling.”

Much of the interior of Zeffirelli’s suite, the most spacious at the Villa, with three separate bedroom suites, was also left as it was with the odd contemporary addition, like Orsina Sforza’s amorphous lamps. “We kept the Syrian furniture,” Gaetani continues, referring to the mother-of-pearl inlaid headboard, chairs and chest of drawers. “It’s a beautiful memory of 1970s decoration.”

I wander through the rooms and terraces, noticing the mix of pottery by local craftsmen, Louis XVI furniture, the abundant maritime motifs and, in Villa Tre Pini, tributes to opera in the form of the Aida, Turandot, Carmen, Norma and Romeo & Juliet suites. 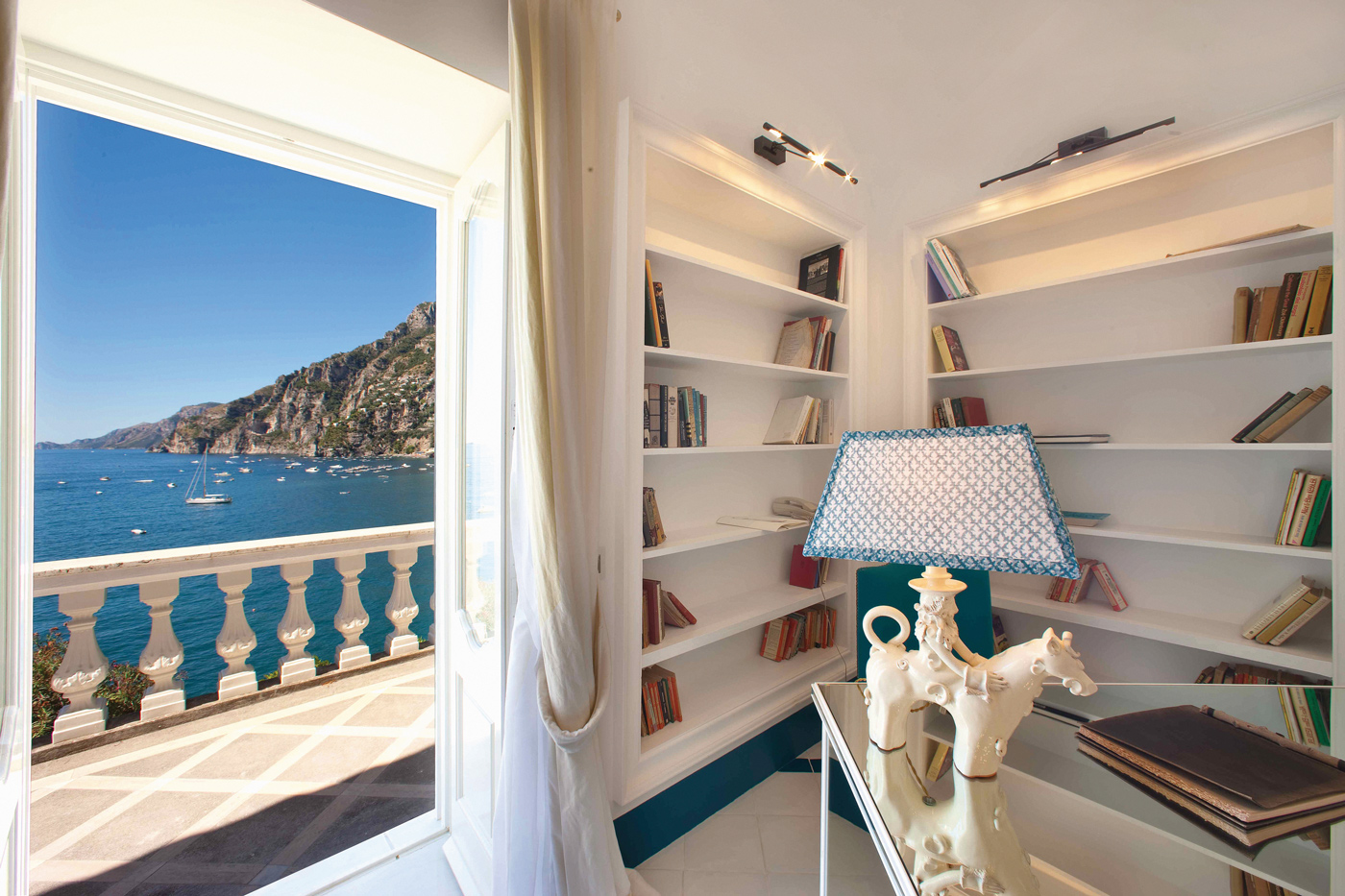 I also wander alone, exploring the secret nooks and pathways to private pools and libraries. All the doors are unlocked and although guests are given keys, I’m told few visitors use them. Myself included. There’s this lingering sense of being in a country house that has been private home to many without losing its exclusivity and priviled sense of seclusion. Even the staff of 30 (two for each room) are like invisible helpers.

You hardly see them except during meals and only hear them in the familiar, hushed tones of kitchen activity.

As a guest, you can walk into the kitchen anytime. You’re served home-cooked food with fresh local ingredients, many of which are plucked from the garden. On my first morning, Alfano graciously asks me what I would like to eat. There’s no fixed menu. 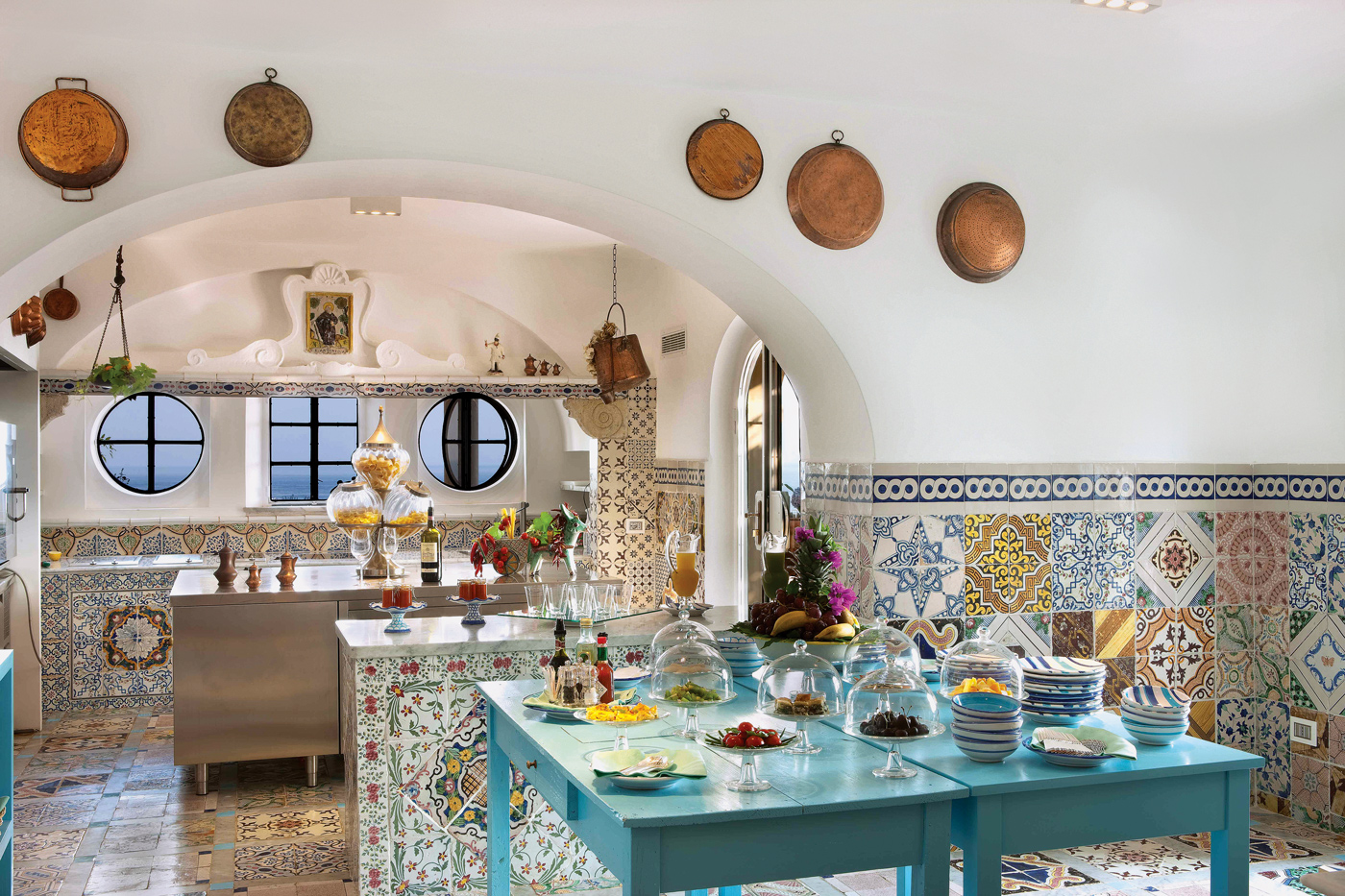 Depending on whether your preference is meat, fish or pasta, a suggestion is made, he tells me there’s spaghetti vongole available when I opt for the latter. The chef, 35-year-old Francesco Iaccarino, is a master of combining basic ingredients, of slow cooking and of the perfect, simple seasoning – generally garlic, lemon, olive oil and fresh herbs. The day after, I’m told that there’s ravioli stuffed with ricotta, a Capri classic known for being soft and paper-thin. As I savour my meal, I suddenly realise that neither pasta or caprese will taste the same, ever again.

It’s been cloudy but on my last day, the sky is clear, heralding the start of summer. Giovanni Russo saunters in, beaming. He owns the Li Galli, a small chain of nearby islands and often brings fish caught there with him. I’m given the choice of the local pezzogna (blue-spotted bream) or sea bass, either served with vegetables in a balsamic and red wine sauce or with lemon on a bed of greens, tomato salsa and endives. I choose both.

As Russo welcomes me and then plays backgammon in the living room with a friend, I couldn’t feel more at home. Or for that matter, more isolated as I lounge on a sun bed later. I’m now at the Villa’s lowest level, by a ledge that juts out over the sea. There’s gym equipment as well and a Jacuzzi carved into a small grotto. Someone in a boat waves to me, interrupting my reverie.

The first guests arrive tonight from Russia and I finish my last meal, inside this time, while listening to Alfano and the crackling fire. He tells me the story of the room’s large mural, which features the words ‘Humanity Asleep’. It is a tribute painted on the spot by Julian Schnabel after he learned that his artist-friend, Vito Gargiulo had just died.

I leave Positano at dawn, the lights of the cottages built into the cliffs flicker, appearing and disappearing, like those in a theatre at curtain call. It makes me think of the Humanity Asleep painting but also of what Steinbeck wrote in the 1950s. “Positano bites deep. It is a dream place that isn’t quite real when you are there and becomes beckoningly real after you have gone.”