Places | Categories | Hotels | Set 2,000m Above Sea Level at the Edge of a Canyon, Alila Jabal Akhdar is a Hotel That Feel Like It’s on Top of the World
PLACES | Hotels 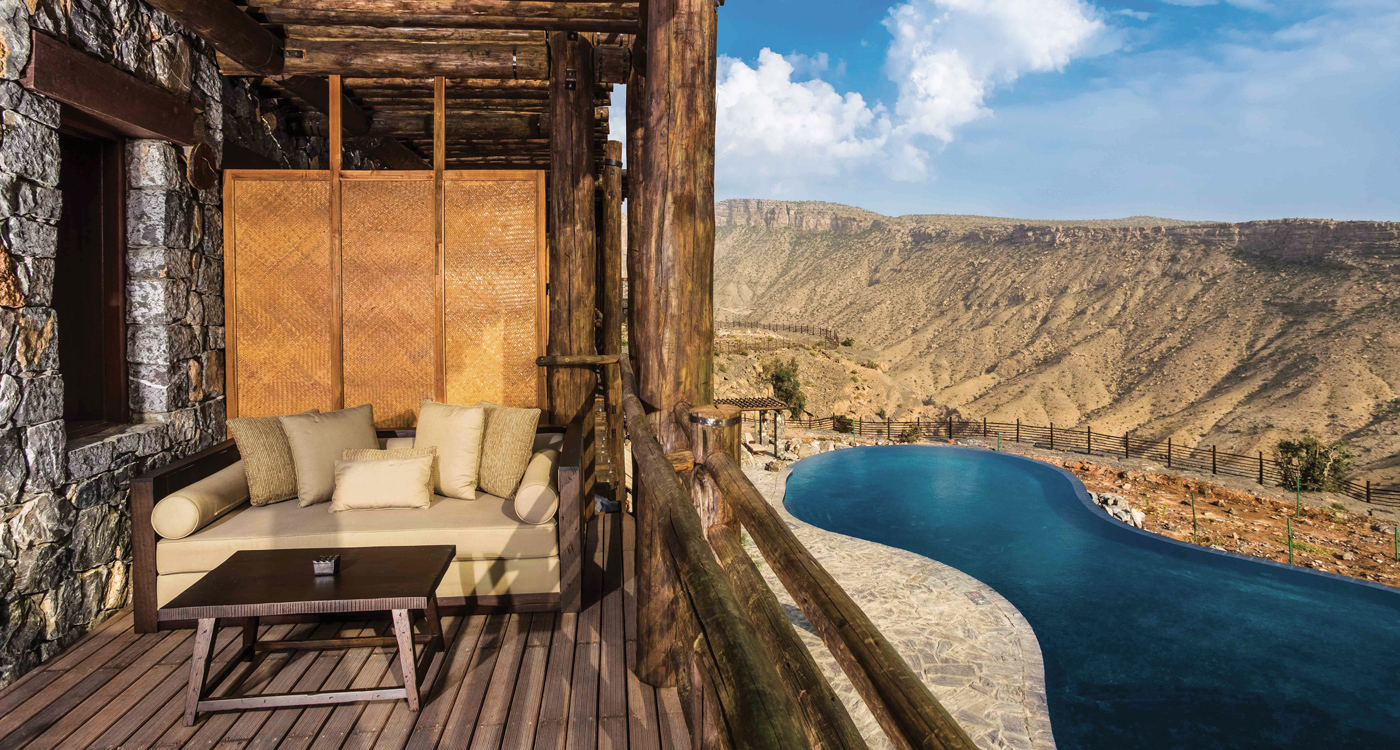 Set 2,000m Above Sea Level at the Edge of a Canyon, Alila Jabal Akhdar is a Hotel That Feel Like It's on Top of the World
December 16, 2016 Raj Warrior

Alila Jabal Akhdar opened last spring on the Al Hajar mountains range, which is one of Oman’s most magnificent, untouched landscapes. Perched over 2000 metres above sea level, the hotel overlooks a dramatic gorge and is perfectly positioned to explore the region’s rugged landscape, making it a haven for adventure travellers and nature lovers alike.

One of the advantages of being an automotive journalist is that you get amazing opportunities to stay at some rather exclusive destinations. Jetting around the world, driving fancy motors and parking oneself in the lap of luxury at an exotic resort for the night is all par for the course. And these destinations are usually in far-flung parts of the world – but then sometimes you find a gem on your doorstep, such as the time when the Alila Jabal Akhdar was to be our resting place for the evening after a drive out from Muscat. 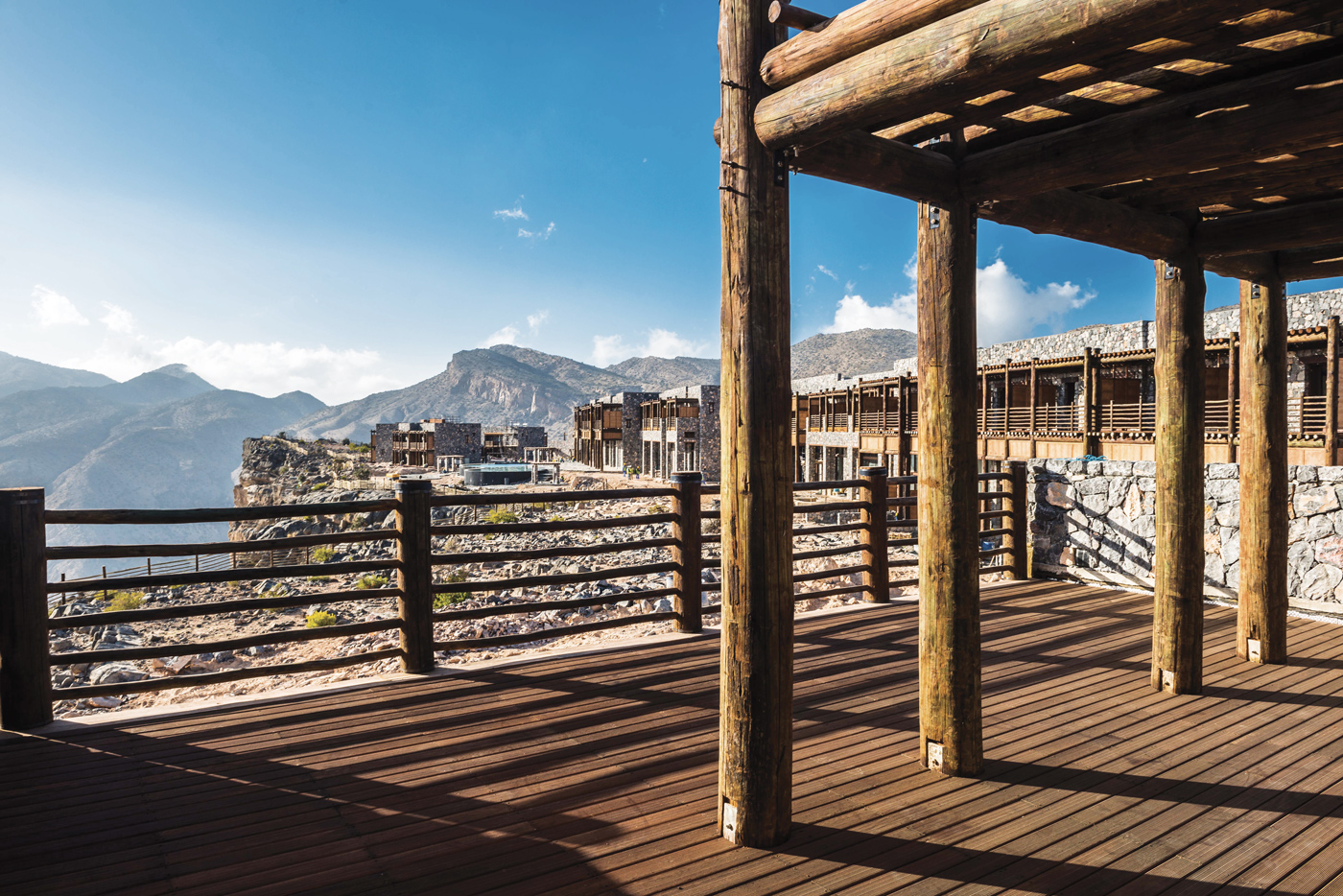 Any visitor to the Sultanate of Oman will be aware of the rich landscapes in the country. Even Muscat, its capital city, sits in between the coast with its sandy beaches, and the outer fringes of the Eastern Hajar ranges. As you drive westwards out of the capital, the Hajar ranges begin to dominate your windshield, particularly if you take the excellent six-lane motorway leading to the interior town of Nizwa. The range grows out of the soil, displaying a jagged fascia that millenia of wind and sand haven’t managed to soften. This is a young mountain range, being formed as part of the continued drift of the Arabian peninsula towards the greater Asian landmass. For Oman, it serves as more than a horizon-defining feature since it separates the coastal plains of the Al Batinah region from the interior, the Dakhiliyah region. By their very nature, the coastal areas have served to connect Oman with the wider world through the centuries, while Nizwa, sitting at the base of the Hajar on the inland side, and the town of Bahla further down the road, have been traditional centres of Islamic learning and cultural traditions, such as Oman’s unique pottery, copperwork and silverware.

With the new highway down to Nizwa, most travellers miss the excitement of the old road that took you through the smaller towns along the route. One of these towns is called Birkat Al Mawz. The reason it even features on the map is because it is the gateway to the higher reaches of the Jabal Akhdar mountain, which translates to ‘green mountain’. The name provides a clue to the kind of the scenery that greets you there, which may, at first, seem at odds with the stark, unfettered appeal of the rocky profile that meets your gaze from the highway. 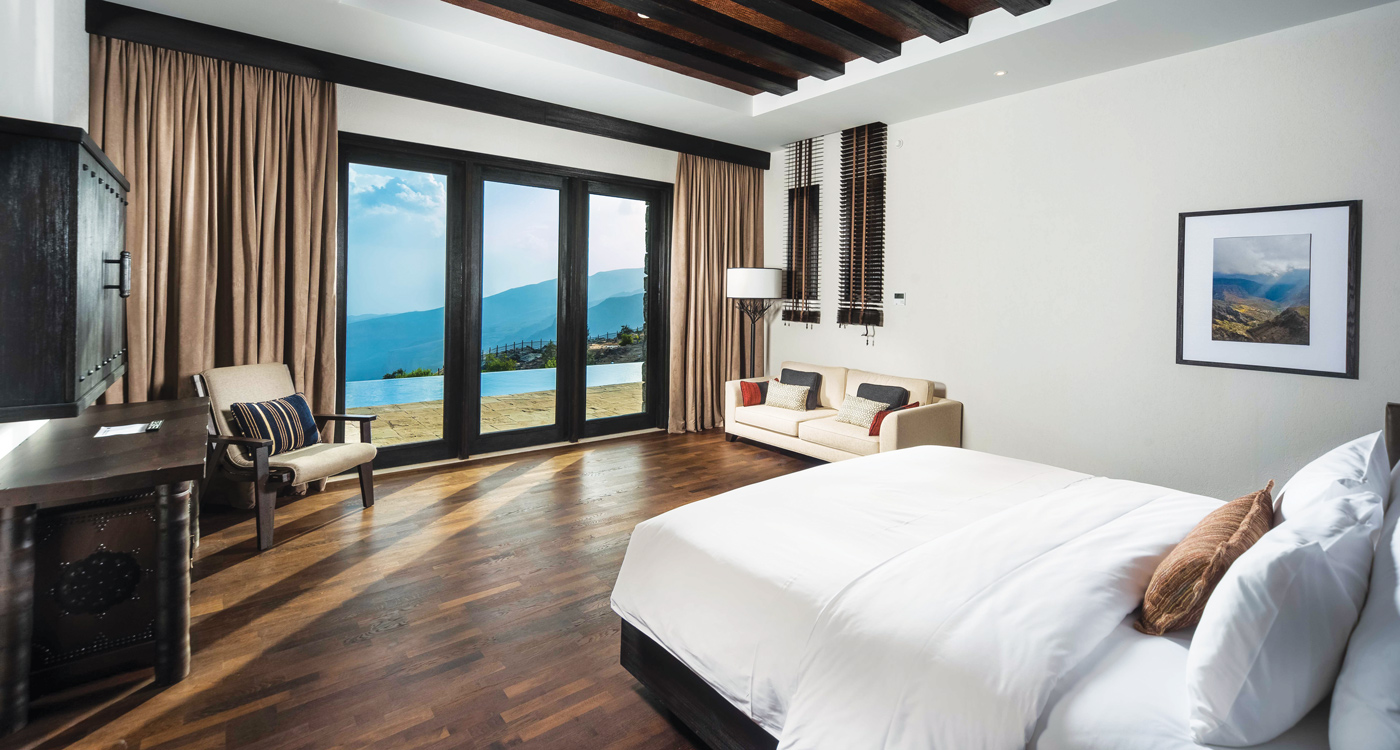 To get there, you’ll need to be in a four-wheel drive or you won’t be allowed past the police checkpoint before the mountain climb. A two-and-a-half-hour drive from Muscat may sound arduous but it pays off as soon as you reach the top of the range and arrive at Alila.

You could almost miss the entrance to the Alila Jabal Akhdar, if you weren’t looking carefully for it. It sits close to a bend in the road and is made in the same minimalist style that epitomises the resort and most of the mountaintop houses. You’ll see extensive use of the almost slate-like stone that forms the mountain. In fact, much of the material that clads the outer walls of the resort’s main building and outlying villas has been sourced from the rock that was dug out from the foundations. Smaller aggregates are used to make the pathways between the buildings, as well as to form the embankments in which the hardy mountain plants make a home.

The Alila brings together the best of Omani hospitality. After the long drive up, you appreciate the welcome drink and the cheery smiles that greet you. While not as effusive as a traditional Omani welcome, the pleasantries serve to remind you of the relaxed ambience of the country.

Guest rooms are located in the series of villas perched along the fringe of the plateau and the view is so stunning that you’ll probably not make use of the sliding glass doors as boundaries, the rocks of the cliff ahead visible through them – it’s only your need of either air-conditioning or heating that’ll get you to close them. They look out across the valley that runs between two arms of the Sayq plateau and across to higher elevations as the Hajar moves on southwards towards its peak at Jabal Shams. 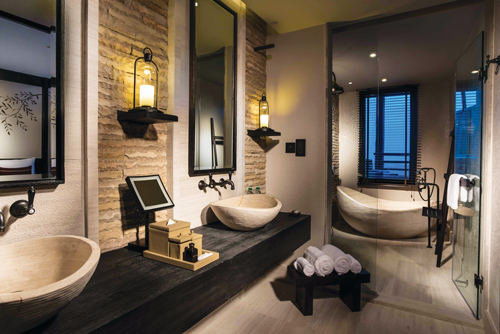 All the rooms are opulent, yet lend the feel of nature. The use of stone surfaces continues, with additional elements that define the culture of the mountains – from goat hair woven rugs to copper lamps, huge teak wood doors and painted depictions by local artists of the homegrown Juniper leaves on the wall. The beds are large and comfortable, the entertainment systems state-of-the art but the WiFi can be a bit patchy.

The generously sized bathrooms, which are a touch more modern than the rest of the room, are in lighter shades of carved stone, which is framed with wood and aged metal. Both the bathroom and the living area open out onto a terrace that incorporates a majlis layout, with wicker seats and cushions and a pergola designed to shade you from sunlight without losing the outdoors feel.

If you manage to saunter out beyond Alila’s boundaries, you’ll find the ruins of an ancient village at the base of the valley and the rusting skeletal remains of an ingenious trolley car system that was used to transport goods down the dangerous slopes. There’s a trekking trail in the brush, like so many other trails in these mountains. From an altitude of a couple of thousand metres above sea level, the quickest way to another point may often be via a hard climb, though the Omani government has ensured that the Sayq area has good roads built on inclines that can be tackled by most drivers. 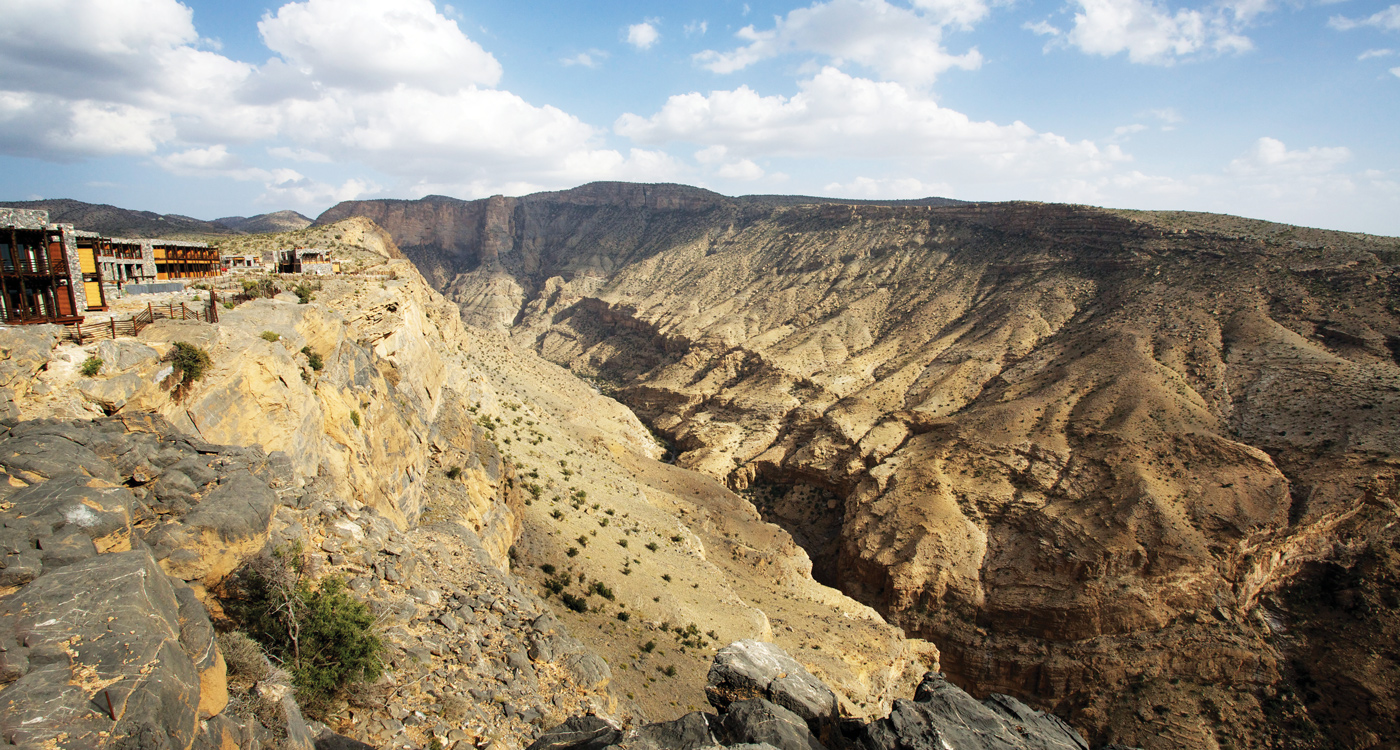 But there are better ways to look out over the valley. The best is to loll in the heated infinity pool that looks like its edge meets the hills in front. If the outside air gets too nippy, as the winter months are likely to be at these heights, the indoor paddle pool is just as good an option to float around in.

The Alila offers a choice of two restaurants for dining and the food on offer covers typical Arabic, Indian and International fare. The larger Juniper restaurant reflects the signature theme of the hotel and the smaller, more exclusive Rose lounge, which is a short walk away from the main building, to offer a more exclusive dining area for private groups. That’s where we spent the evening, watching the sunset from the terrace.

Nights can be unearthly. This high up, the view of the heavens is untrammelled by light haze. You see stars and constellations that aren’t visible to the naked eye from the city. There’s also no sound, the silence is only broken by the muted chatter of your dinner mates.

Early mornings can be rather chilly on the mountaintop and on my last one, I reflect about how there’s nothing better than sitting on your terrace to watch the sun rise from behind the mountain, with your hands wrapped around a steaming mug of coffee. As the shadows shorten towards the walls, the air quickly brings a bit of warmth and that’s when we moved on towards another leg of the drive that took us down to the Sharqiyah sands past Ibri. However, you could choose to spend the day wandering around the villages on the plateau, meeting villagers who invite you into their open majlis and share fruits and honey with you – the slopes of Jabal Akhdar are home to some of the most exclusive orchards in the country because of the unique climate.

The Alila Jabal Akhdar is one of those destinations that you are very unlikely to encounter anywhere else in the world. It is well worth putting aside a few days on your next trip to Oman to experience this hidden gem, or even just flying straight there, to the pinnacle of understated luxury.