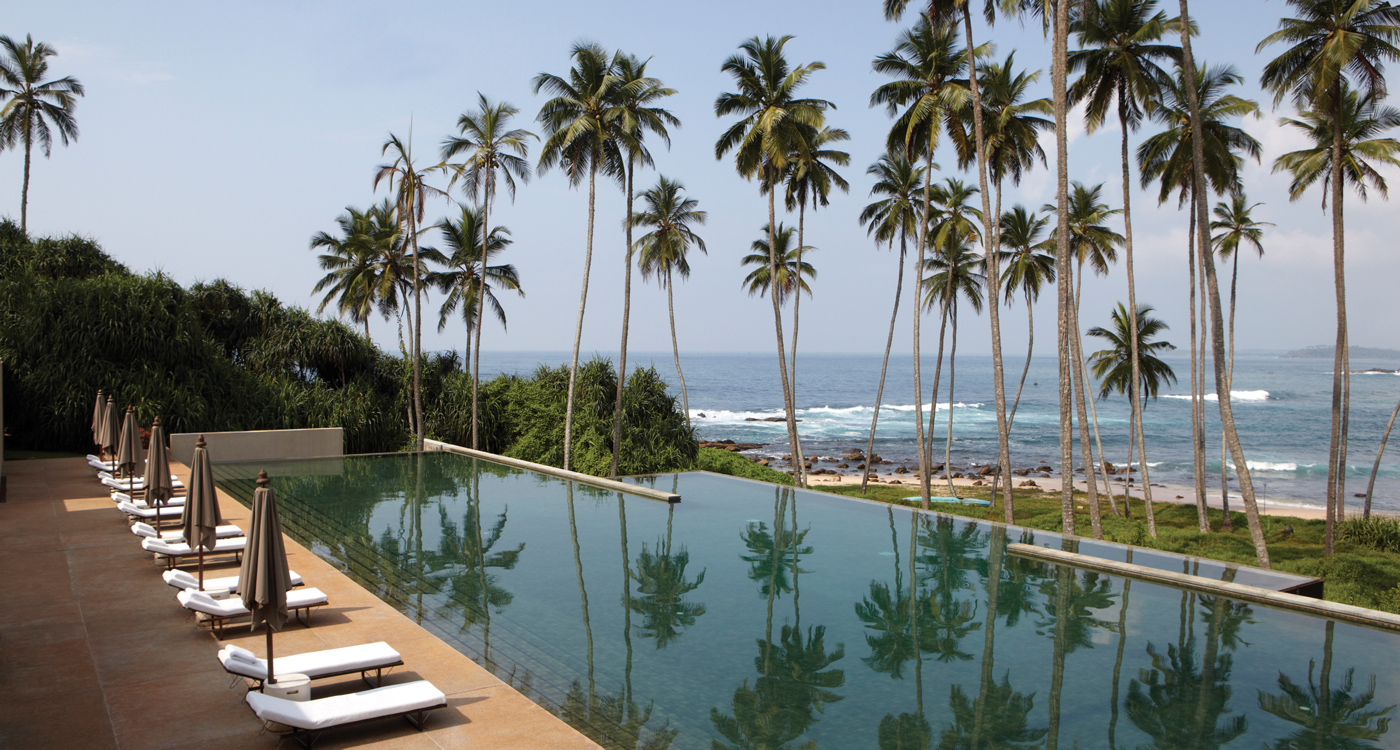 There Is Surely No Better Way to Discover Sri Lanka Than From the Comfort of the Two Aman Resorts There
August 17, 2017 Warren Singh-Bartlett 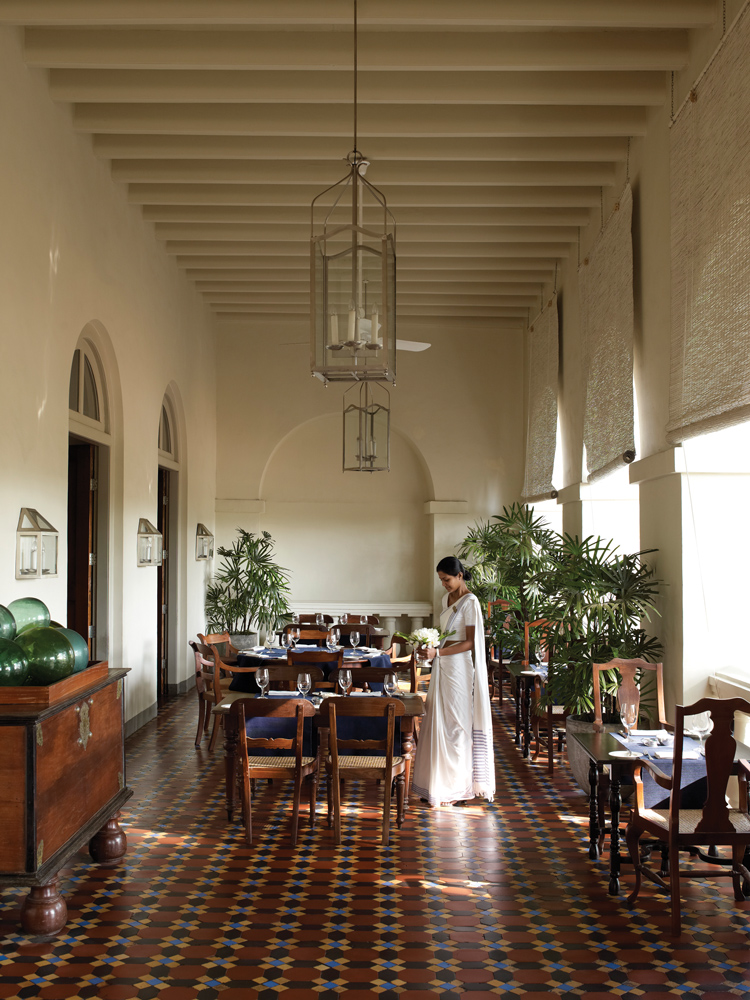 It’s an opportune time to discover Aman’s two properties in Sri Lanka given that the serene beachfront retreat of Amanwella has just undergone a two-month refurbishment and the old-world elegance of Amangalla is simply timeless.

The coconut palms chittered in the breeze. Wending down the hill from the Amanwella resort, I reached the beach, a curving strand of sugary sand that ended at a rocky promontory about a kilometre away, where the swaying sign of a small café could be seen tucked into the trees.

We’d arrived on Gulf Air the night before and while both the flight to Colombo – a relatively recent addition to the airline’s growing network – and the welcoming Business Class lounge at Bahrain’s refreshingly compact (but soon to be expanded) airport had been delightful, we’d not reached the Amanwella until almost one o’clock in the morning.

So I’d spent the afternoon lazing by the dip pool in the courtyard of my villa, a secluded walled space that reminded me of a minimalist Marrakeshi riad, overlooked by a gnarled frangipani that was responsible for the fragrant, palm-sized yellow and white flowers on the pool’s surface. Lulled by the sound of cicadas, I fell asleep reading my book.

It was almost evening when I awoke and by the time I got to the beach, it looked like the tide was rising. With nothing between southern Sri Lanka and the Antarctic but sea, the summer waves were wild and surf-worthy, powerful swells that swept carpets of gently hissing seafoam almost up to the tree line. Seeking a spot to watch the sunset, I made my way to a pinkish granite boulder halfway up the beach. By the time I clambered up, my freshly pressed linen shorts were soaked.

As the sun slowly sank behind the headland, throwing the palms into silhouette, that minor irritation was forgotten. The show was spectacular. Ribbons of dying light streaked the darkening sky with trails of fiery red, orange and pink and for a while, seemed to tint the moon, as the stars came out.

On the hill behind, the golden lights of the villas and the low, glass-walled building, where the main pool, restaurant, boutique and library were located, had come on. A Sri Lankan take on the Asian Modern vibe for which the Aman is known – Amanwella draws inspiration from the architecture of local Tropical Modernist, Geoffrey Bawa – the resort looked like Japanese lanterns scattered amongst the trees. 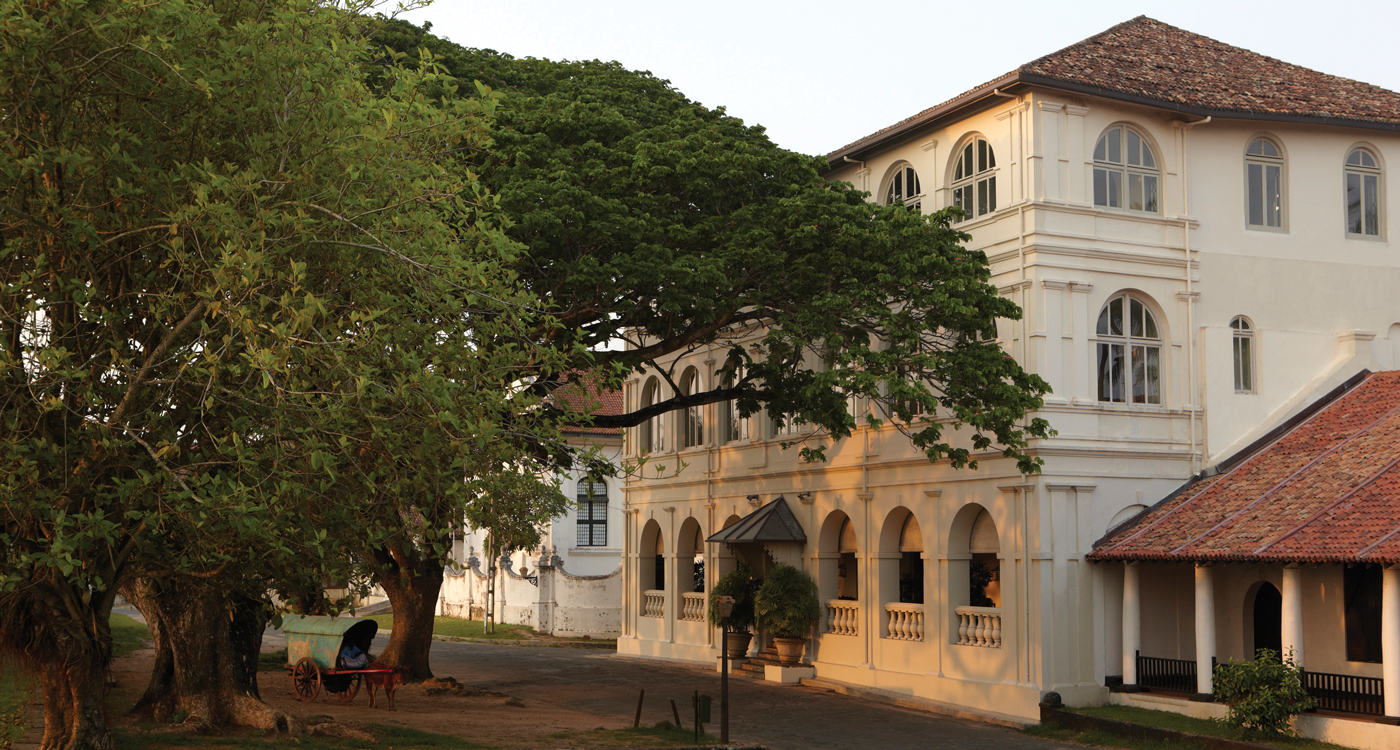 Amangalla can be found inside the walls of Galle Fort, a former Dutch headquarters built in 1684. Its heyday was in the 19th century as the New Oriental Hotel, a popular stop for passengers travelling on P&O steamers.

A SRI LANKAN TAKE ON THE ASIAN MODERN VIBE FOR WHICH THE AMAN IS KNOWN – AMANWELLA DRAWS INSPIRATION FROM THE ARCHITECTURE OF LOCAL TROPICAL MODERNIST, GEOFFREY BAWA.

I headed back to my villa for a quick dip and a shower before dinner, which was to be served on the beach later that evening. Stepping through the front door, I was momentarily distracted by a fresh plate of delicacies that had been delivered while I was on the beach. My stomach growled and I realised that I’d not eaten since nine-thirty. That plate was exactly what I needed, which was how moments later, I found myself sitting in the dip pool, listening to music as I munched my way through an assortment of Sri Lankan savouries. 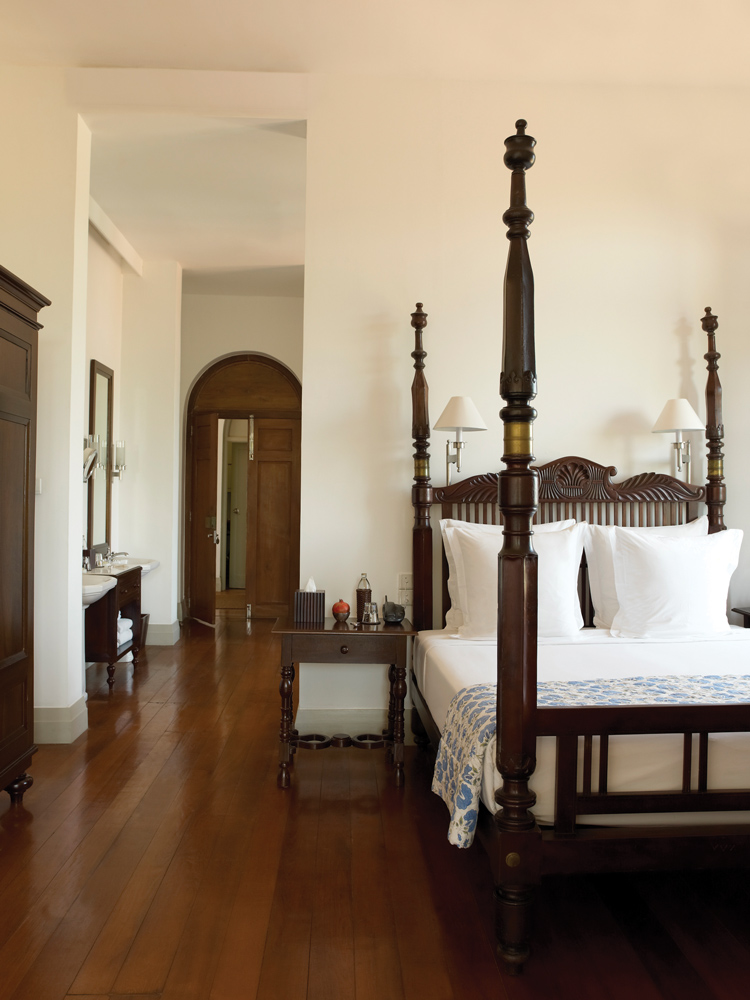 I hadn’t seen another person since breakfast, not even on the beach, although I had heard the low whine of one of the resort’s carts as I’d walked towards the beach. I’d spent the entire day in my villa, showered, finished the bottled water and then gone to the beach for no more than 40 minutes and yet by the time I returned, my room had been remade, the towels changed and the fridge restocked and the nibbles delivered. It felt like I was living in my own private resort, run by invisible but expert staff.

But then it is for precisely this that the Aman is known. Adrian Zecha, the founder, originally set out to build a holiday home in Thailand before he ended up turning it into a small boutique hotel. The next couple of properties appeared slowly but with every addition, the group’s devoted followers (they call themselves Amanjunkies) grew. Many became repeat guests.

Often copied since, the Aman was a revelation when it began. Zecha’s approach – small-scale, locally-flavoured Modernism married to seamless service – appealed to travellers who wanted somewhere beautiful and modern but also private and who were prepared to pay a premium to get what they wanted. This is why for many years, Aman was able to pursue a strategy of deliberate under-booking, anathema to any other hotel chain, boutique or not.

In 2014, a consortium headed by Russian billionaire (and self-professed Amanjunkie) Vladislav Doronin, purchased the group and since 2015, when Doronin became sole CEO, the group has slowly begun to shift focus towards wellness; spas and massage, of course, but also immersion courses, during which guests undergo holistic therapy that includes advice on balanced nutrition, traditional medicine and treatments, and mind-body practices, like yoga and tai chi chuan.

This is why, when we check into Sri Lanka’s second Aman, the Amangalla, a couple of days later, I find myself sitting face-to-face with a somewhat stern, but matronly Ayurvedic doctor, whose mouth twists slightly at almost every answer I give.

After a good ten minutes of taking my pulse, pressing first on one side of my wrist, then moving to another, closing her eyes to better feel my heartbeat and then shifting pressure again, she tells me that my overall health is alright for my age (but should be better), that my pulse is good but my system is sluggish, my digestion is compromised and that if I’m not careful, I’ll end up putting a strain on my kidneys. She asks if I have any skin problems, which surprises me, as I do but my condition – an itching condition called pruritus – is not visible. 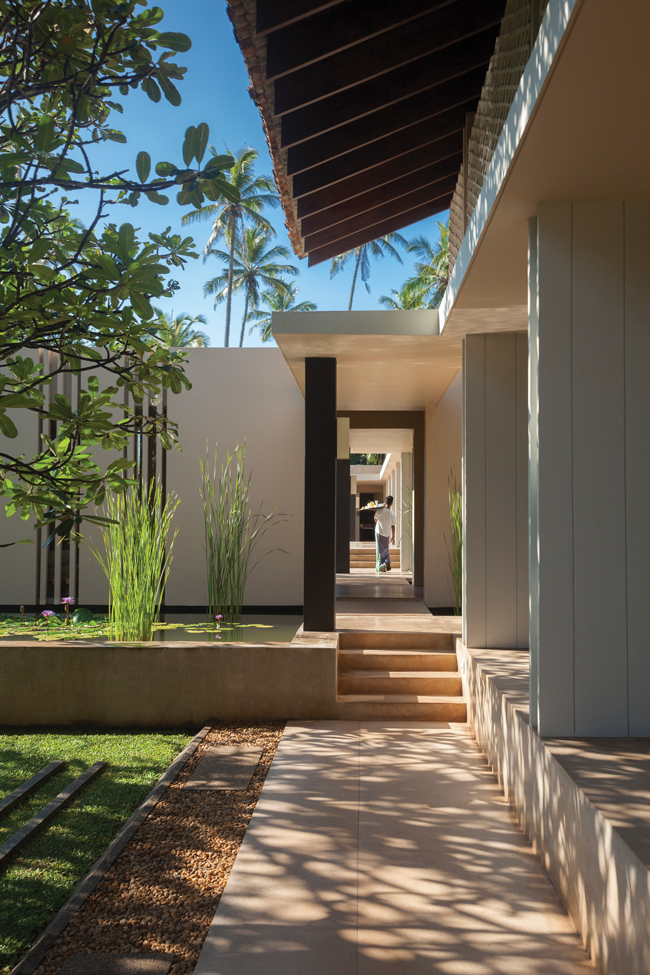 : Amanwella’s main restaurant is a simple pavillion-style linear building adjacent to the bar and the two share a terrace. Middle right: The common pool stretches towards infinity on not one but three sides, providing a satisfying swimming alternative to the bay’s sometimes strong currents.

“Yes,” she says when I confess. “I feel it. You itch outside because your organs itch inside.”
That sounds ominous.

“You must treat it.”

I tell her that I take antihistamines.

“That you can. But better if you do panchakarma. Cleaning inside. It needs minimum 15 days. Longer is also better.”
tell her that I am only staying a few days. She looks at me over her glasses. “Then I can do nothing now. You must take turmeric and honey every night. Before bed. No tomatoes. No potatoes. No paprika. No water with your meals. And do panchakarma soon.”

The consultation ends with a session of therapeutic massage based on my diagnosis. It’s designed to open blockages. I drift off during the session, which is gentler than my previous
Ayurveda experience but the following morning, I definitely feel as though something in my system has shifted. If you know what I mean.

The rest of our stay involves an afternoon by the gorgeous garden pool, a walking tour of the fort, a rustic-luxe dinner in a rice paddy and an evening with an entertaining local guide, who has us in hysterics. It’s all part of the Aman ethos of encouraging guests to get out and experience local life.

As enjoyable as this is, I find myself wishing I could spend more time in the hotel (though of course, most guests would be staying longer than our 48 hours) because it’s a gem. Lovingly restored, with an eccentric past, it occupies a 17th century Dutch colonial building just inside the city walls at Galle Fort. With its creaking teak floorboards, period fixtures and very urban setting, Amangalla is a world away from the beachfront Zen of Amanwella. Yet here too, the Aman ambiance is unmistakable. In the city but somehow not of it, we exist in a quiet cocoon where time seems to flow more slowly, the sound of passing rain against the windows is an invitation to daydream and your most difficult decision becomes whether to enjoy your book by the pool or sprawled out in a curtained cabana, instead. 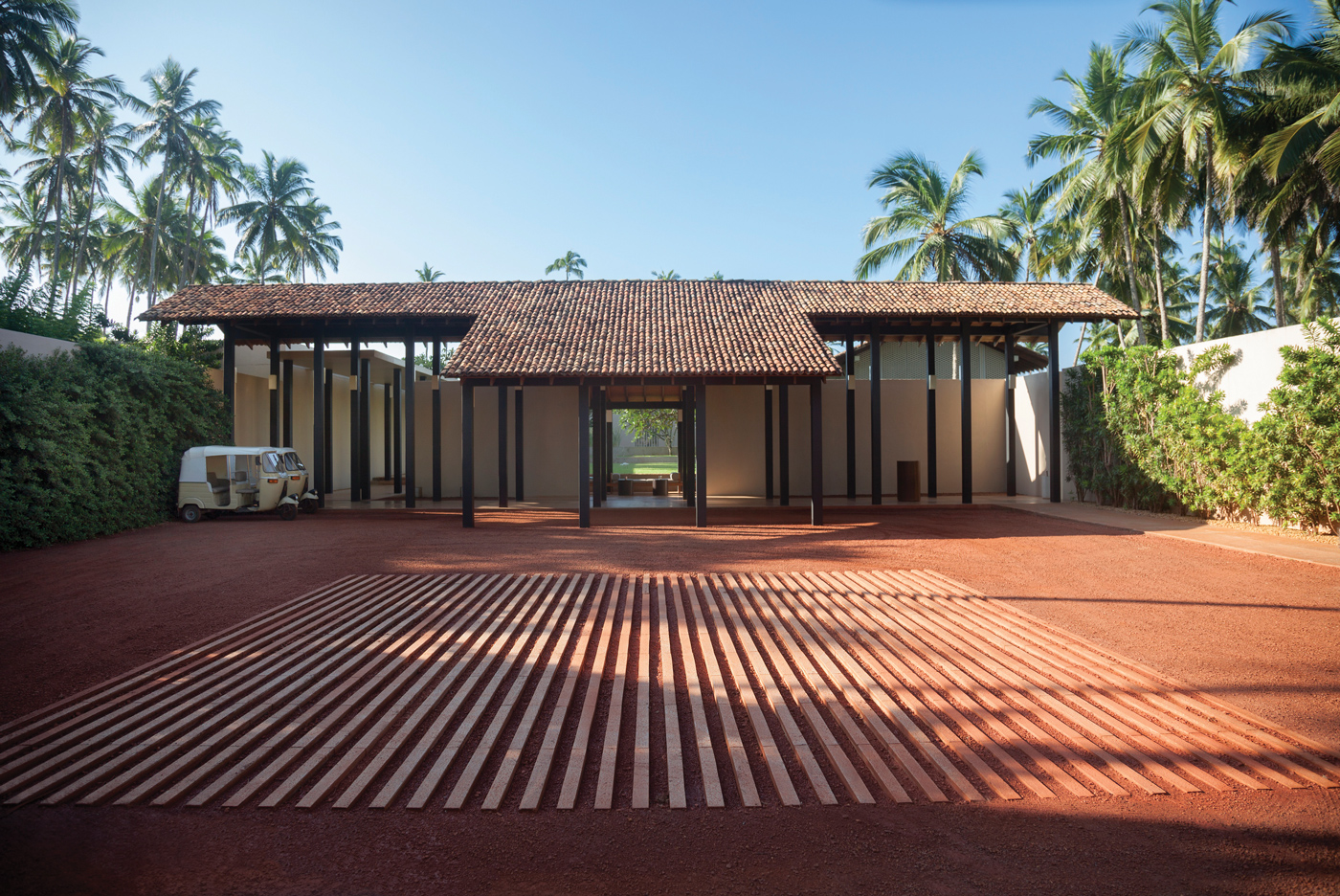 With just 27 suites set in and among a series of understated terracotta single-storey buildings, it blends in seamlessly with its surroundings, even retaining dirt roads, which are so common in the area. Still, the entrance is dramatic with a sleek modernist forecourt welcoming you to the splendours within.