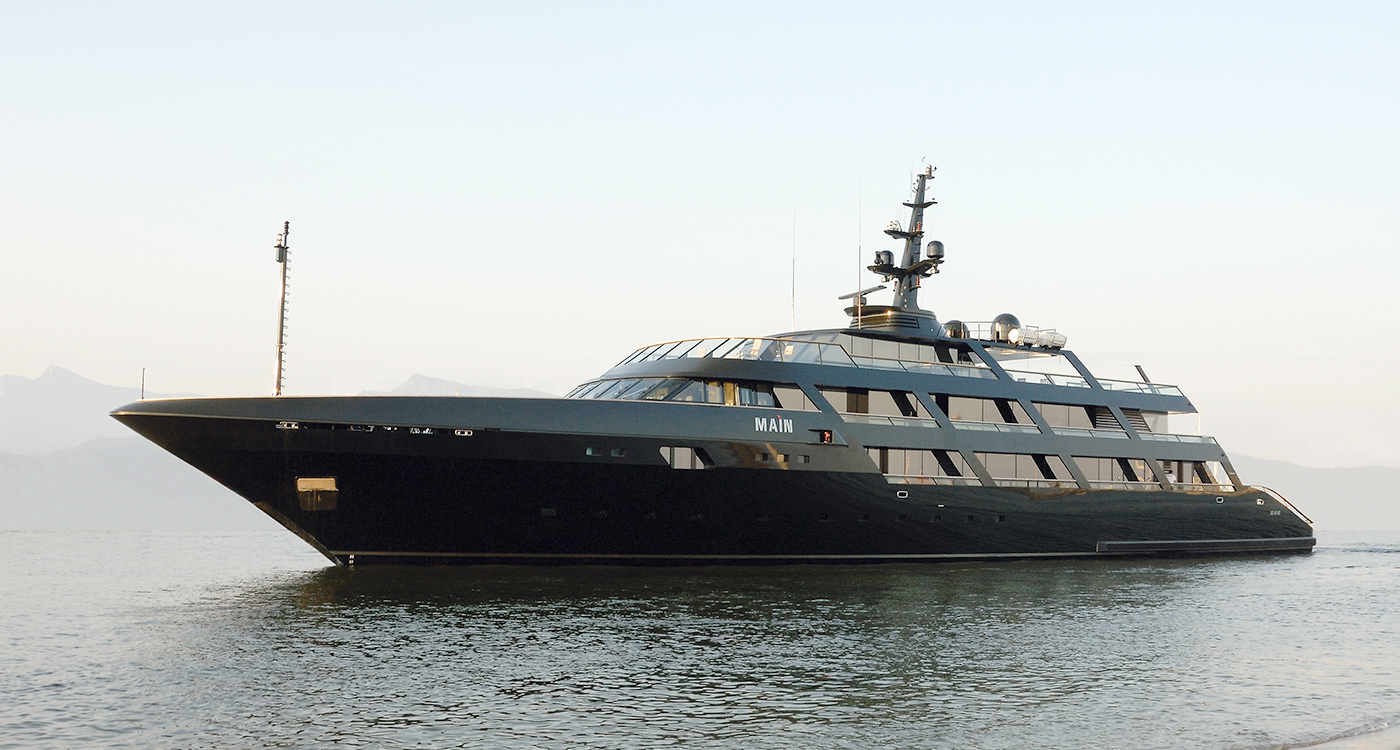 We Go Onboard the Legendary Italian Designer Giorgio Armani's 65-metre Codecasa To Find Out What Floats His Boat
August 1, 2015 Peter Howarth 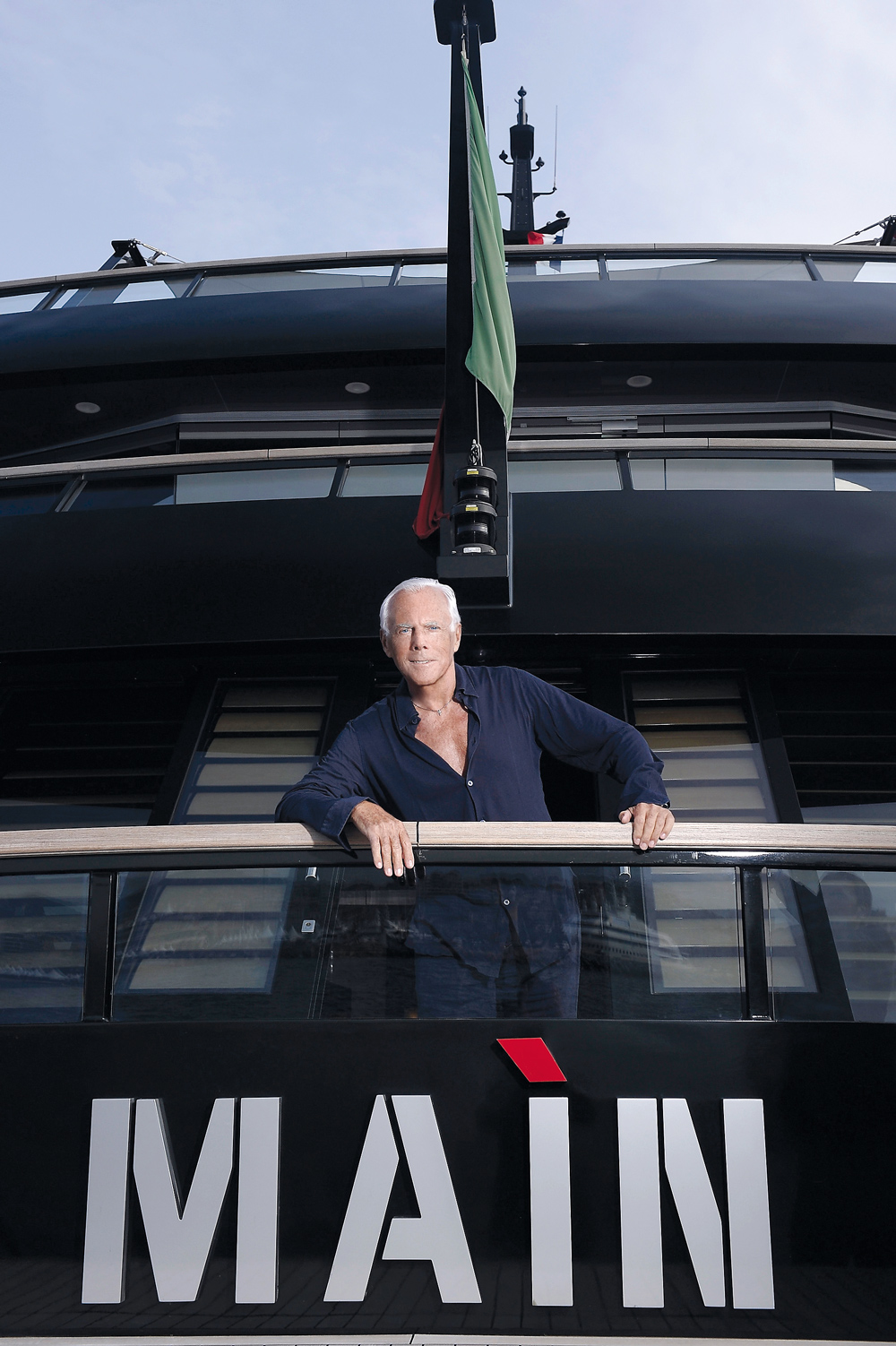 ABOVE: Why Maìn? “It was actually my mother’s affectionate nickname when she was little,” says Armani. And why is the boat dark green? “The sea is rarely what we’d call blue,” he explains. “It’s green or dark blue, or sometimes even turquoise, and I liked he idea of a green boat, as it would be camouflaged at sea and never appear flashy.”

Giorgio Armani is Italy’s most successful fashion designer and a self-described perfectionist so it’s little wonder then that he couldn’t put up with chartering others’ substandard yachts and created his own. Twice in fact, because Maìn is his second custom build, and it perfectly encapsulates the designer’s vision of simplicity, elegance, comfort and function.

If you’ve ever had any doubts about quite how glamorous Giorgio Armani’s world is, then a scan of the front row of his latest Armani Privé couture fashion show in Milan would have given you a clue. There, ranged along the seats in the designer’s purpose-built theatre – the Armani Teatro – were Cate Blanchett, Leonardo DiCaprio, Sophia Loren, Glenn Close and Pierce Brosnan, at a special event to celebrate the 40th anniversary of the Armani label. The previous evening, at a party for the Milan Expo opening, for which Armani is Special Ambassador, his guests included Tom Cruise and Tina Turner. In essence, where Hollywood is concerned, Giorgio Armani is something of a legend, the designer to which the A-list turns when they need to shine on the red carpet.

There is gentle irony here, though, for Armani’s style isn’t of the ostentatious and highly decorative kind, but something much more subtle and subdued. He speaks of his love of elegance and sophistication rather than passing fads. “I just try to design clothes that are stylish and avoid the traps of transient trends – I believe the best way to make people look good is to pursue a design vision of simplicity, elegance, comfort and function,” he says. This statement is, of course, laced with modesty. Today, in an industry dominated by big groups and corporations, Armani is remarkable in that he still owns 100 per cent of his company. His firm’s last quoted results showed a record financial performance: consolidated revenues of over two billion Euros and net earnings of over 400 million Euros.

“I have always believed in elegance. I get that from my mother,” he continues. “My mother was very elegant. She had great force and a refined sensibility, she taught me that if you wish to create beauty, only do what is necessary, and no more. It is a lesson I have never forgotten. And it is the approach I use when creating both fashion and interiors. In my cabin on Maìn, there is a picture of her on the desk, with me when I was about six on the beach at Rimini. She looks beautiful in her black skirt and one-piece bathing suit – that’s how I remember her.”

Maìn is the name of Giorgio Armani’s second boat. His first, Mariù, was built by Codecasa in 2003 and he designed its interiors. But for Maìn – also from Codecasa – he wanted to be more intimately involved in the creative process and he worked with the builders on the design of the whole project. “I designed it entirely, from the hull to the interiors, putting in everything I consider important at sea and, at the same time, introducing a concept of the home. And so I designed not only things like the sunbathing and dining areas, but also the parts where people really live, the most private parts.”

So Maìn is the designer’s 65-metre home on the water. Delivered in 2008, it is constructed from high tensile steel (the hull) and aluminium (the superstructure). It has been externally covered with epoxy and painted an unusual dark green colour (a Dupont top coat). The choice of this unconventional hue was certainly a statement. To put it in his words, “The green camouflages the boat at sea, so it doesn’t appear too flashy.”

ABOVE: Inside, natural birchwood dominates the floors, venetian blinds, indoor stairs and bulkheads, while floor-to-celing windows run in a continuous line along the boat.

“My house in St Tropez has a view like this,” he said. Then he looked out to sea. “That’s a horrible boat.” A big beast of white metal floated in the harbour. At the time, I had asked him whether he had a boat of his own. “In two years’ time – it’s 150 feet (46 metres) long,” he extended his hands, “and brand new. It’s for Pantelleria.” This small volcanic island just off the coast of Sicily was Armani’s favoured holiday home then; and the boat he was having built was Mariù. 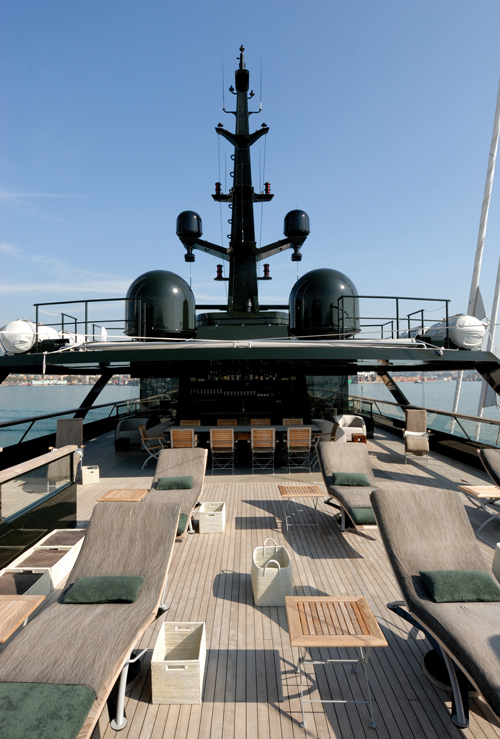 ABOVE: The sun deck and bar of Maìn form an elegant area in which guests can relax.

Named after his mother – Armani explains that Mariù was her nickname when she was a young woman – this was the first boat he owned, after years of holidaying on boats owned by others. The problem with not owning your own vessel, he explains, is that you never really know what you’ll get. “Sometimes the boats belonged to people I knew, sometimes they were just chartered. Invariably they were not my style – too white, too much lighting, too much marble, crystal and mahogany.” As a scrupulously private person, he doesn’t like anything that attracts too much attention. “That’s why I’m not that keen on hotels. That and the décor – actually, big boats are often like hotel suites out at sea. So my own boat seemed to be the perfect solution. I enjoy a degree of isolation – that’s what my home on Pantelleria is all about. However, it’s not just on islands that I like to isolate myself. I isolate myself in worlds that I create from what I love. I remove what I don’t like. You have to organise an atmosphere around yourself.”

Maìn was also incidentally, named after his mother – this time her nickname as a little girl. Both adhere to his understated design vision: Mariù was charcoal grey and even had all the shiny stainless steel fittings sanded down to render them matt and less glaring, and Maìn takes things a step further. “I came up with the idea of creating bulkheads from the navigation deck to the flying bridge, with a type of venetian blind – louvres – made of birch wood. They prevent the strong sunlight at sea bouncing off the water from coming in violently, giving the interior a muffled appearance.”

The Maìn took 30 months to build, and a great deal of that was spent in interpreting two key design features that Armani specified. Firstly, the natural birch wood louvre blinds and the windows they serve run in a continuous line along the boat – the effect is that it looks as if Maìn has no walls. “You can see the whole panoramic view from the inside,” says Armani. The other big challenge he set for the builders, who he visited regularly to supervise their work, was his desire to create an innovative sliding bridge deck saloon floor, which gives more space to the area connecting the upper saloon to below, creating the effect of one expansive living room. “It wasn’t easy work for Codecasa, considering that most of a boat’s technology is concealed in the floor!” he says with a mischievous grin.

However, though Maìn is restrained, she is still a luxury enterprise. The profile is provided with side bulwarks made of reinforced stratified crystal glass at their tops, so as to deliver better visibility of the sea. Inside, the natural wood dominates on floors, venetian blinds, indoor stairs and bulkheads all over the boat. A fireplace is in the main deck saloon (electric, of course, respecting security laws at sea) and the galley is decorated with satined retro-lacquered glass. All ceilings are lacquered in metal grey and the remaining areas are lacquered dark green to echo the exterior. The bathrooms are enriched with marble. Most of the furniture is from Armani Casa, though much of it has been custom-made by the Armani Casa specialist Interior Design Studio under the designer’s eagle-eyed supervision. The boat has a cinema, spa pool, substantial sundeck, indoor gym and six large cabins for guests. 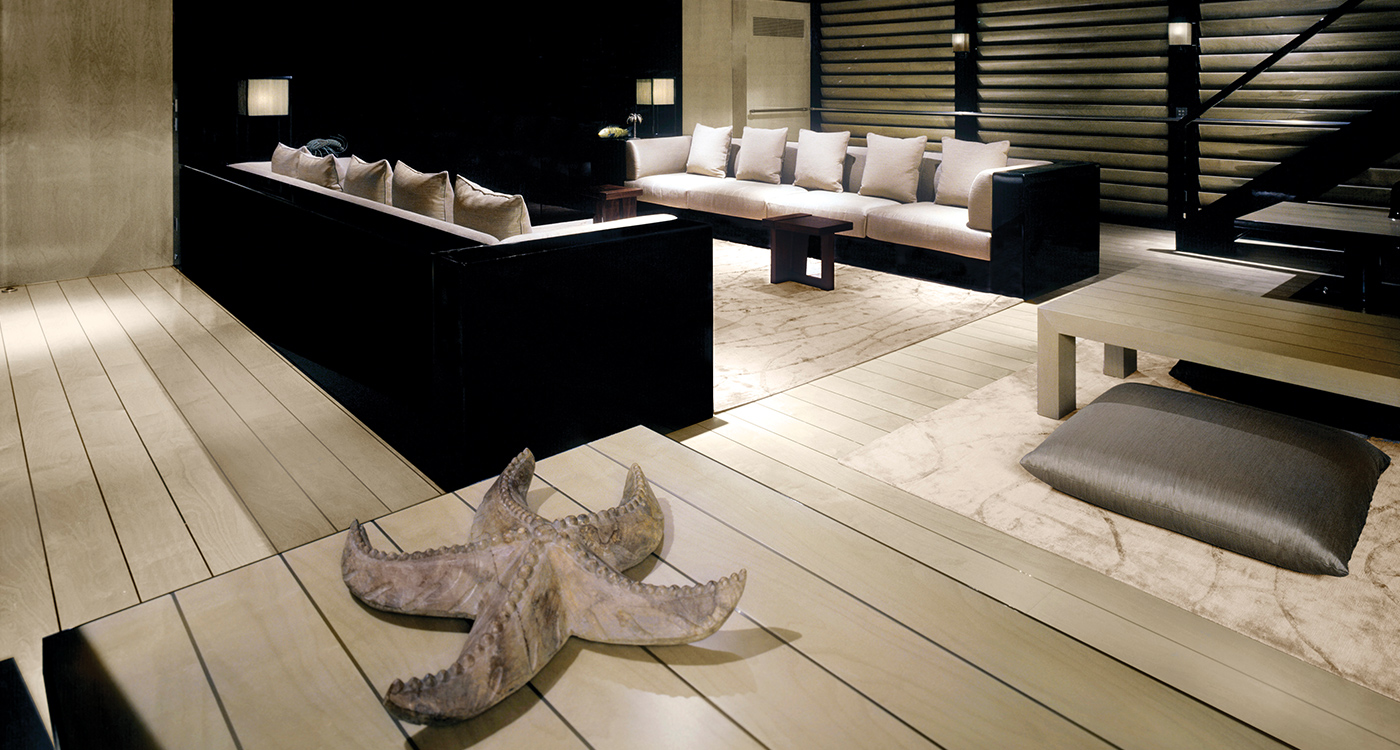 ABOVE: It’s worth noting that almost all the furniture is by Armani’s Armani Casa interiors division, although much of it was customised exclusively for the yacht.

“I worked very closely with my interior design team, as I do on all my homes,” says Armani, who as well as his holiday retreat on Pantelleria, also has boltholes in Saint-Tropez, St. Moritz, Antigua, one of the Croatian Brioni islands, and one on the Italian coast. “I wanted my second boat to feel like a house and so I designed it on the basis of certain principles and intuitions, which have given rise to a model that is completely different from my first boat. I went for comfort, arranging spaces to give plenty of visual freedom; you never feel as if you are closed-in, in a box with low ceilings.”

The result is an impressive home-from-home for this very private man. He enjoys inviting family and friends on board to holiday with him (he says his favourite sea to explore is the Mediterranean), but discretion means that who those lucky people are must remain a secret. However, from what we know of Giorgio Armani, the chances are that there are bound to be one or two Hollywood A-listers among them. 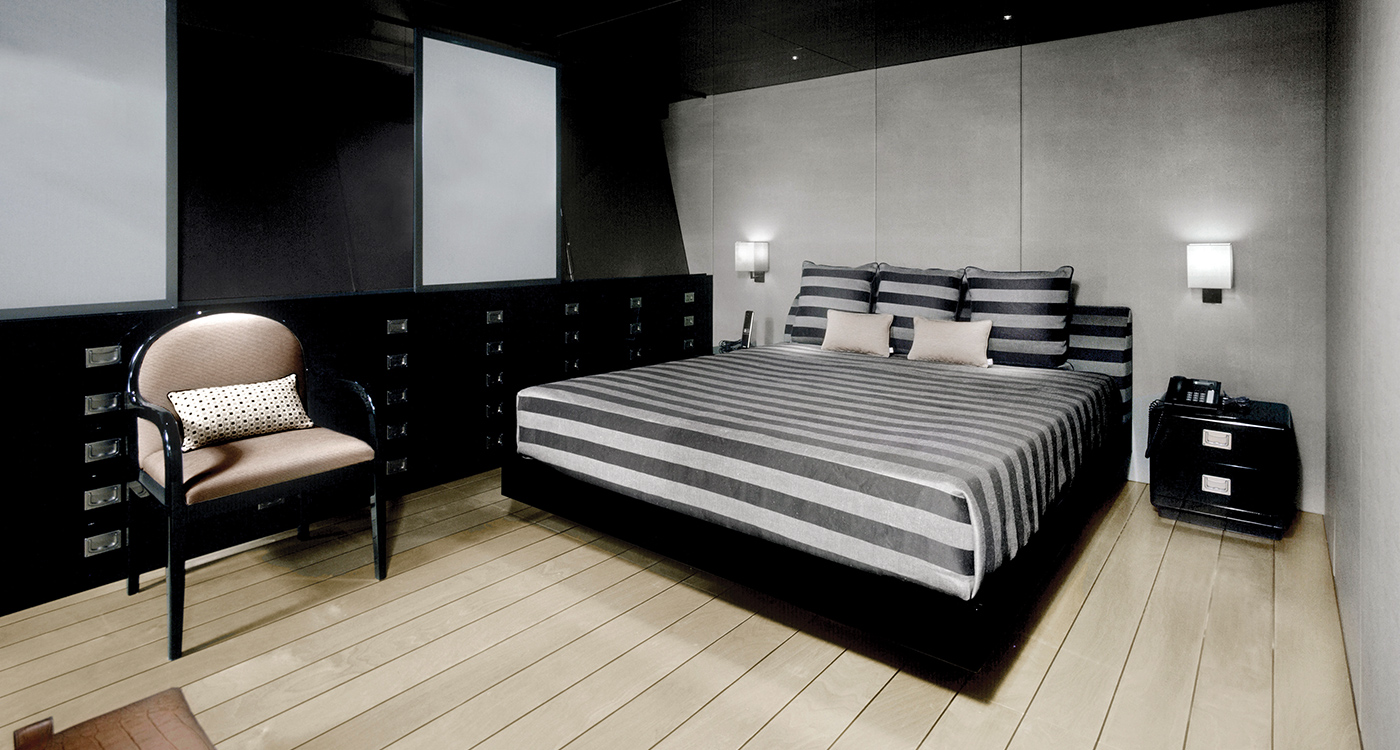 ABOVE: The boat has a cinema, spa pool, substantial sundeck, indoor gym and six large cabins for guests but for Armani, the only regret is that his rigorous work schedule prevents him from spending as time onboard as he’d like.