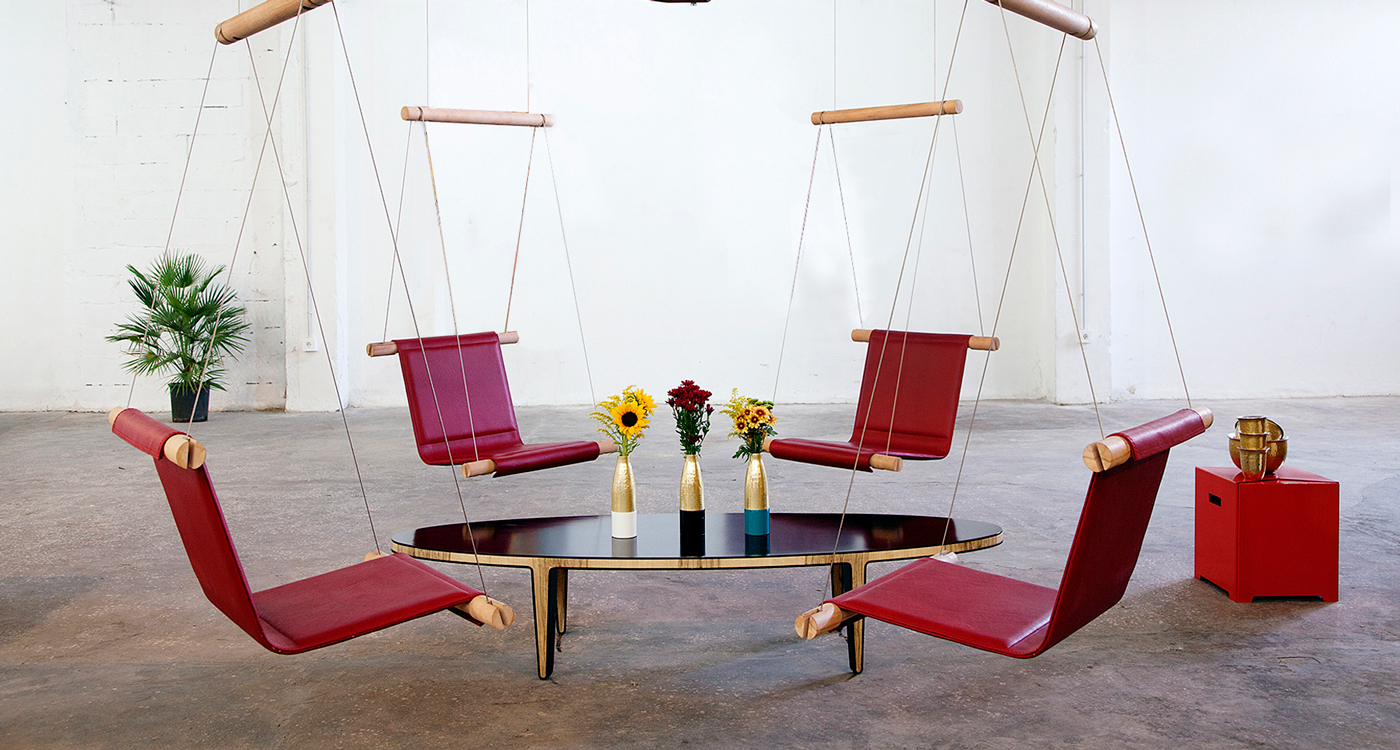 Take A Seat on One of These Head-Turning Designs by Nayef Francis
June 12, 2019 Marwan Naaman 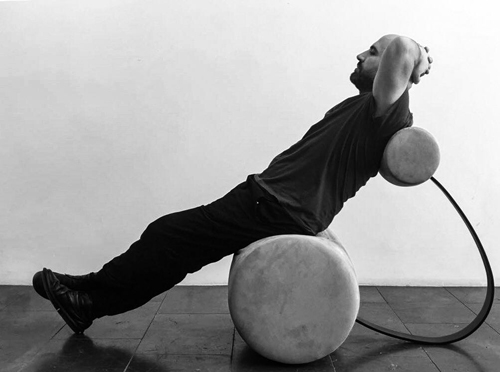 Nayef swings Francis kicks back on his Loop chair.

Don’t let those modish swing chairs fool you: Lebanese designer Nayef Francis’ contemporary products are in fact an ingenious window to the past. There’s a touch of nostalgia in all of Nayef Francis’ work. The Lebanese designer credits a childhood spent among Jdeideh’s lush orange groves, building tree houses and various other objects, with having instilled a lifelong love of the arts into his spirit. The Jdeideh orange groves may be long gone, but Francis’ passion for art and design has only grown stronger over the years, beginning with his interior architecture studies at Lebanon’s USEK, moving on to the interior design business he launched and nurtured in Dubai for nine years and culminating with the establishment in 2011 of his eponymous brand and showroom in Beirut’s then blossoming Mar Mikhael neighbourhood. After having outgrown his digs there, Francis moved to a new space in Karantina in 2017, right on the highway, with a showroom on the ground level and offices in back and on the upper level.

Yet even before he launched his furniture and accessories design firm, Francis always believed that was the direction he would eventually take. “I started product design in Dubai in 2001,” he says from his Beirut showroom. “I used paperwork and sketching. I always had this project in mind but didn’t have the opportunity until I came back to Lebanon. The craftsmanship here helps a lot.”

While he creates light fixtures, shelving, cups, tables and more, Francis’ seating – chairs, couches, stools – are dazzlingly creative, many of them harking back to ancient Lebanese craft traditions yet with functions resolutely tuned into the future. “There’s an idea behind each product related to nostalgia but with a playful aspect,” Francis says.

Many of Francis’ chairs are on view at his showroom, including the Trapeze, Loop and Cube chairs. “The Trapeze is our bestselling chair,” says Francis, pointing to a sleek leather seat that hangs from the ceiling and resembles a swing. Ideal for a reception area, the Trapeze chair can work on its own or in a set of two, explains Francis. “It’s comfortable and looks neat. It’s a serious design that still carries joyful attributes.” In 2015, the year it was first released, the Trapeze was selected as one of the best products of the year by Interior Design magazine in the United States.

The Cube chair is perhaps the one that most reflects Francis’ nostalgic flair. Inspired by the Lebanese khaizaran straw and wood chair, which spoke volumes about Lebanese heritage and was once ubiquitous across Lebanese homes, restaurants and cafés, Francis’ Cube is a combination of wood and canvas, with a seat and backrest that look like that ancient chair. Under his watchful eye, the chair has been transformed into a contemporary piece of furniture with clean, straight lines, noble, solid wood and the possibility to stack a number of chairs on top of each other for maximum usage of space and ease of storage.

Another creation, the Float chair, a circular model with an empty space in the middle, is inspired by the swim rings (or water donuts) that have become synonymous with summertime pool and beach play. “The Float chair is a reminder of my childhood,” says Francis, “when I used to go to the beach and sink in a water float. The chair gives you comfort and takes you back to that moment.”

There are also bigger pieces in his showroom, including the Mellow sofa, a curved piece on which rich velvet is stretched to create a feeling of luxuriant well-being. By stretching the fabric on the entire piece, Francis does away with stitching and other unsightly modes of production. “You feel you want to hug it,” he says when describing it.

Each Nayef Francis piece is handmade, resulting in products that are different from one another. “This is a very important part of our work,” he says. “Machine intervention is extremely limited, so each product has a unique identity to it.” To conceive each chair is an arduous process, and one that’s usually quite time-consuming. “Designing a chair is difficult. Working on proportions is very difficult.” Prior to each creative endeavour, Francis tries to come up with something new by always asking: “What can we add to the market that doesn’t exist?”

So what’s next for the designer? “We’re developing a new brand that will be positioned between Vitra and IKEA,” Francis says. Functioning in parallel to his established brand, the new label, which will be launched in the autumn, will seek to produce more mainstream pieces. “We’re also going to commission designers from the MENA region to design for the brand.” His new company will be the first in the Middle East to launch such an undertaking – one that resembles the collaborations that have become a celebrated part of IKEA and Vitra’s offerings. It’s an exciting venture from one of Lebanon’s most inventive designers.